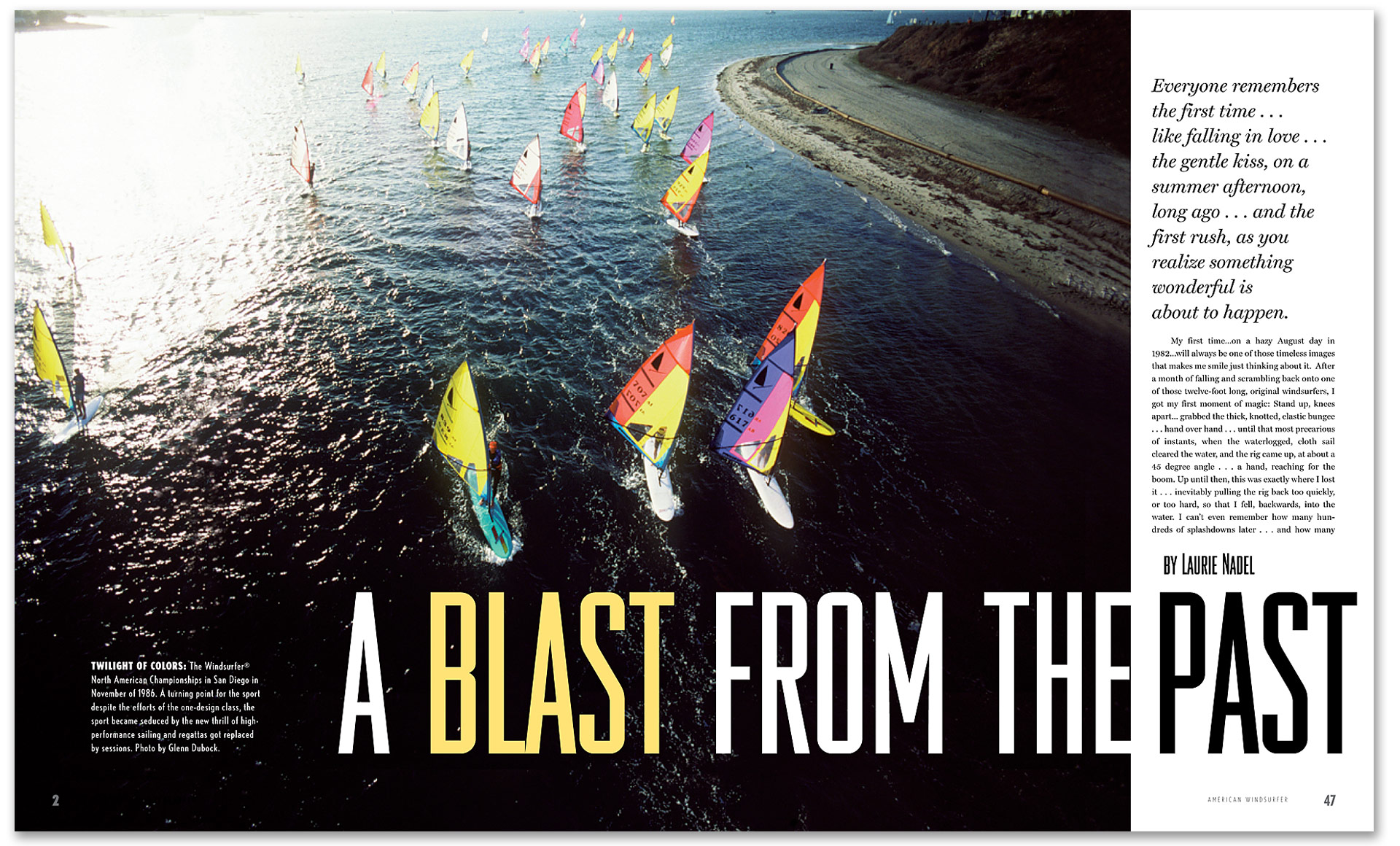 …you realize something wonderful is about to happen.

(above)TWILIGHT OF COLORS: The Windsurfer® North American Championships in San Diego in November of 1986. A turning point for the sport despite the efforts of the one-design class, the sport became seduced by the new thrill of high-performance sailing and regattas got replaced by sessions. Photo by Glenn Dubock.

Everyone remembers the first time . . . like falling in love . . . the gentle kiss, on a summer afternoon, long ago . . . and the first rush, as you realize something wonderful is about to happen.

My first time…on a hazy August day in 1982…will always be one of those timeless images that make me smile just thinking about it.  After a month of falling and scrambling back onto one of those twelve-foot long, original windsurfers, I got my first moment of magic: Stand up, knees apart… grabbed the thick, knotted, elastic bungee . . . hand over hand . . . until that most precarious of instants, when the waterlogged, cloth sail cleared the water, and the rig came up, at about a 45-degree angle . . . a hand, reaching for the boom. Up until then, this was exactly where I lost it . . . inevitably pulling the rig back too quickly, or too hard, so that I fell, backward, into the water. I can’t even remember how many hundreds of splashdowns later . . . and how many times people laughed at my comic attempts to balance, while performing what seemed like one of the world’s trickiest maneuvers—positioning the rig while the world beneath your feet squiggles.

Soon, thousands of people around the country were getting swept into the romance and excitement of floating on the surface of the water, holding onto the wind, enjoying the colorful geometry of those flashing, rainbow-colored, cloth sails.

I will never forget the warm flush of the wind along my right arm as a whispery “beginner’s wind” made her first, hesitant contact with that faded orange, 3.5, cloth sail.  If success is 99 percent failure, then a month of scuffed knees and bashed fingers had taught me well. Without quite understanding how it happened, my left arm pulled in, my right arm automatically stretched along the salt-bleached, wood boom, just in time for that first, unmistakable kiss of breeze, swelling in the pocket of the sail. With my left foot planted against the mast base,
I stationed myself in that eternally awkward starfish position, taught to beginners by windsurfing instructors all over the world. Great stance, it was not. But hey, it worked. As the wind increased, I set my first course. . . and windsurfed to a buoy about 50 meters (yards) away . . . without falling once! And yes, I managed to tack and sail back, as well. Before I knew it, I was in love.

And I was not alone. As a popular 1980s bumper sticker put it, “Happiness is a hand-held sail”. Soon, thousands of people around the country were getting swept into the romance and excitement of floating on the surface of the water, holding onto the wind, enjoying the colorful geometry of those flashing, rainbow-colored, cloth sails. Although the original, twelve and a half foot long boards themselves weighed in at a cumbersome, tortuous fifty-five pounds, they were floaty and stable riders. And those sails, which we would laugh at today, could be rolled around your mast, like a flag, instead of needing to be babied and battened each time. (If you found yourself contending with too much wind, you could pull the rig out of its slot, untie the boom, and roll the sail around the mast, positioning your rig along the length of the board, so that, as you paddled back to safety, you kept everything together.) Even if you didn’t like
rigging, it was a good way to make friends, as we would often stop to talk, and watch, helping each other get the hang of it. Many a more
experienced sailor would take the time to initiate a frustrated novice into the unique mysteries of duct tape. (Like Yoda’s proverbial Force, duct tape has a dark side and a light side, and yes, it holds the universe together—the windsurfing universe, anyway.)

…those sails, which we would laugh at today, could be rolled around your mast, like a flag, instead of needing to be babied and battened each time

This shared feeling that we were all learning something new, together, made those early years of windsurfing seem both a party and a celebration, where each of us discovered and tested our own strengths, focus, humor, persistence, and limits. And then went past what we had done before.

As the spirit of windsurfing spread, our population expanded. In less than a decade, we grew from thousands to more than one million.  By 1987, there were 1.2-million people windsurfing in the United States, according to the National Sporting Goods Retailers’ Association. The
excitement of those early days held a certain
innocence. We were pioneers, in a sense, discovering the contours of new water the way our forefathers went forth across new land. It didn’t matter what kind of contraptions we used—my own first
sailboard was a three-piece monster from Germany called a “Shark”. Before each session, it had to be assembled with various metric nuts and bolts, then taken apart at the end of the day. With its heavy teak daggerboard, two piece aluminum mast, and stainless steel rods, the Shark would bring on howls of laughter if I brought it to any windsurfing beach, today. But, like the original Windsurfer, the Shark proved itself worthy whenever the wind called from the high trees.

This shared feeling, that we were all learning something new, together, made those early years of windsurfing seem both a party and a celebration, where each of us discovered and tested our own strengths, focus, humor, persistence, and limits. And then went past what we had done before.

Regardless of whether your sail luffed, or the mast foot had to be wrapped in aluminum foil and jammed into a horizontal slot in the center of the board, as soon as you stepped onto the water, the salty foam and crisp breeze took you into another reality. Your soul was free to find its way, along the edge of the wind, chasing sparkles along the
flickering surface of the water. Checking in with a couple of touring gulls, overhead, the view from here made any problems you left on land smaller and less significant. Whenever the wind picked up, it felt like you were holding onto life with a capital L …”steering the fast sail of the roses…stuck into..solid marine madness.*”

In my case, there was an eight-year hiatus between windsurfing sessions. It wasn’t by choice, but when you come down with a life-threatening illness, the challenges of regaining the ability to walk and talk can take up as much energy as cranking along the crest of a swell at twenty knots. “You’ll be lucky if you can walk upstairs,” my doctor warned when I asked when I would be well enough to windsurf again. (You can imagine what I must have felt, on that day, eight years later, when I faced the water again, wondering if the Zen approach of “great faith, great doubt, and great determination” would work for windsurfing as well.) Fortunately, I was given one of the original Windsurfers, with a bleached-out wooden boom and floppy, faded 4.5 sail. As if it had been only a few weeks, instead of nearly a decade, the moves came back, instinctively, and soon, the instructor was paddling as fast as he could to catch up. “Lady, are you sure you haven’t done this for a few years?”

WIND PROPHET Hoyle Schweitzer (above) foresaw the transformation of the sport he created. The 1984 Olympics was a monumental setback and a major turning point for the sport. Decades later, those in the know would say, “Hoyle was right!” Photos by Glenn Dubock and Craig Peterson

But it had been years, I found, as I started looking for a new windsurfer, only to discover that the new generation was an F-16, compared to that old Wright brothers’ plane I used to own. Along with “faster is better” and “higher is better” and “newer is better,” buying, owning, rigging, and windsurfing were now serious business. Gone were the friendly exchanges of tools and tips. The gurus of duct tape having apparently vanished, along with cloth sails and teak daggerboards. Like the nineties themselves, the “New Windsurfing” was a purposeful, take-it-to-the-max activity. The goal was stoke. The faster the speed, the greater the stoke. In order to get to stoke, you needed a masters’ to calculate the ideal ratio of volume, width, and length of board to the specifications of cambered Mylar sail, carbon mast, and boom. Everything had to fit together perfectly or it didn’t work. The new sails were unquestionably designed for high performance but they were so finely calibrated that rigging became an excruciating, solitary, and unforgiving ritual. Bring your own rigging tool, and hey, stay in your own space. This mindsetraises questions similar to those asked more eloquently in the classic movie, “Inherit the Wind”. In pondering the darker side of progress, the hero observes that when air travel becomes part of everyday life, we will be able to cover large distances quickly. But when we can fly like birds, the clouds will smell of gasoline, and the sky will lose its wonder. Our transitions in windsurfing have comparable implications. There is no question that, rigged with a Neil Pryde V5 5.9, a Fiberspar mast, and sailing a Xantos 310, I’m windsurfing twice as fast, in heavier wind, than any of the old gear could handle. But with each of us intent on taking it to the max, there is a self-absorbed intensity to how we windsurf these days as if we’re all in competition with ourselves, if not each other. Tethered to the cutting edge of techno-speed, we’ve traded harder-faster-higher for the simple fun of hanging out with friends, along with what feels like a part of our collective soul.

I started looking for a new windsurfer, only to discover that the new generation was an F-16, compared to that old Wright brothers’ plane I used to own.

Although one of the attractions is the media image of big wave-big wind action, the excitement of windsurfing can be felt any time you push off, suspended, as if by magic, between the sea and the sky. People like myself, who have little or no expertise in bump and jump conditions, are just as capable of an enduring passion for the sport,  as are the legends and pros, so often photographed looping off those mast-high waves.  Yet, because of the trend among sailboard manufacturers, towards developing and manufacturing high-performance gear for the technically advanced sailor, windsurfing has not attracted as many new people in the past decade as it did at the beginning.

That is kind of a shame.  A lot of people have been missing out on one of the most mind and body expanding experiences available today.  While there’s a part of me that would like to keep that a secret, so that my private coves and beaches stay that way, another part of me feels sad, remembering how much fun it was to hang out on the water, together, without any of us taking it so seriously.

Along with the excitement of then, there was also a feeling that you were on the threshold of discovering something new…like the first time you fall in love.

So, as we begin a new century and a new chapter, we can continue to be wondering where this journey of wind and water will take us.

Laurie Nadel is the author of  “Sixth Sense” and several other books.  A former writer/producer for CBS and ABC News,  she has been writing about windsurfing since the mid-1980s. Her autobiographical book, “Dancing with the Wind”, will be the first in a series of Zen windsurfing chronicles.  (For a sneak preview of Part One, visit www.americanwindsurfer.com)