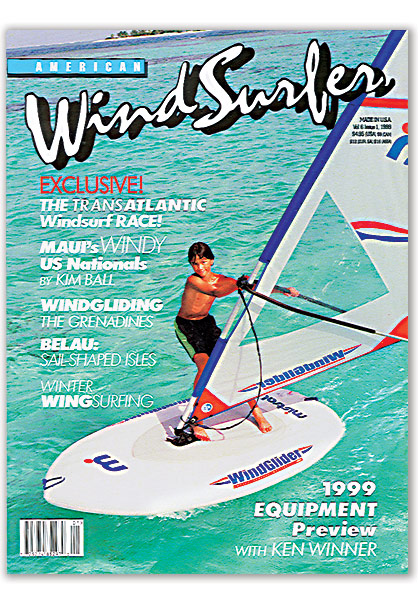 A WINDGLIDING POSE: Eleven-year-old John Chao Jr. taking  the WindGlider for a spin. He and his brother Robby and Alex & Katie Johnson were selected as models for the WindGlider 1999 photo shoot. They sailed for a week in the waters of the Grenadine. See WindGliding the Grenadines starting on page 54. Photographed by Daddy Chao with a Leica M5-50mm Sumicron.

Now that we are back on terra firma, it’s easy to sit back and glorify a conquest on the high seas. The trials and tribulations of the trip have all been elevated into nostalgic moments of thrills, spills and chills

Forehead-slap-entertaining though these new products may be, the real action for 1999—the changes that look like they’ll shape windsurfing for years to come—have to do with the same old themes: board and sail design and construction.