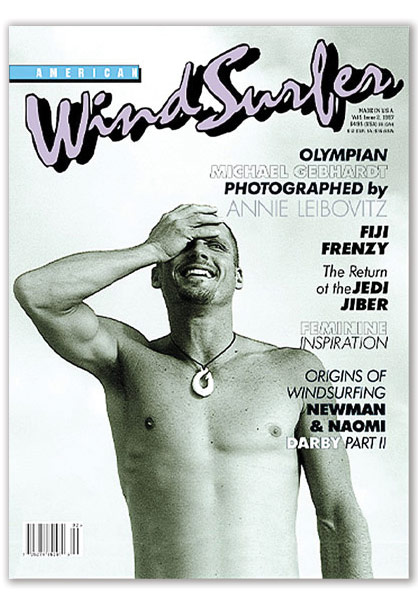 Michael “Gebi” Gebhardt, olympic U.S. windsurfing champion, a Silver and a Bronze medalist since 1988. For the cover, Gebhardt was photographed by world renowned portrait photographer Annie Leibovitz in Savannah, Georgia. For artistic considerations and respect for the photographer’s vision, the photograph is reproduced full frame as a wrap around cover.

This wrap around cover has been made possible by a generous contribution from
an anonymous patron of photography. American Windsurfer Magazine is pleased to
display this full-frame photograph of Olympian Michael Gebhardt taken by photographer Annie Leibovitz.

Recently I stumbled onto a wonderful movie entitled “Contact” where the heroine was accused of Windsurfing across the Universe. (I screamed with laughter when the line referring to windsurfing was delivered by the character played by James Wood.)

It is friendship that holds together the pages of this issue and delivers a dynamic testimony to the role it plays in the creative struggles of this publication.

I just finished reading your article in American Windsurfer and I am very touched. It almost brought me to tears to think you two could have been mistreated so badly by the whole windsurfing community. I am so glad you both have finally been acknowledged.

The Transformation of Michael Gebhardt

There are angels whose humanity burdens their cellophane wings. They soar happily while tethered to their genetic whims. They're gifted, filled with talents, yet compromised by brittle shells of flesh.

The Return of the Jedi Jiber

Not so long ago, on an island not so far away...a dark invader was establishing a new order among the windy beaches of the Federation and seriously challenging the rebel forces of the Windsurfing Alliance.

My wife has a certain sporting sensibility. As someone who will give pretty much anything a go, she’s even tried windsurfing a number of times. But like many women, she’s run into a familiar set of problems with the sport, most of which wind up having to do with me.

The sailors rendezvoused at the airport and were met by a convoy of trucks and buses to transport them and their equipment to the main port on Nadi. There, the sailors and crew were met by a large cruise ship that was to deliver them to one of the most remarkable event site ever found, Namotu Island.

The "Origin of Windsurfing" series continues with PART II of Naomi and Newman Darby Interview. The published interview was edited for space limitations. The full, unedited interview is provided here.

Screamers is a section to showcase windsurfing’s freshest angles. It is here that we applaud those windsurfers who strive to broaden the horizons of our sport by continually venturing into the zone where will power, equipment and environment meet with astonishing results.