WOMEN UNITING COVER—Seems that the cover of Volume 9 Issue 2 sparked the interest of windsurfing’s forgotten sisterhood. Not only will you find letters here, but perhaps the single most letter-generating article we published to date was the new column titled Woman to Woman. This kind of passion and interest from our readers is what we love to pique.

What I Like
Just back from Hatteras. Snagged a recent issue of American Windsurfer while there. Glancing at some older issues too, I was reminded of what I liked most about the magazine—it breaks the conventional mold as often as it upholds it. This is most clearly punctuated by your covers; they offer the expected windsurfing action shots just enough to create a base from which to pop the readership right between the eyes with the surprising. It’s almost always an image of exploration and fun. I like that. Be it full body male nude windsurfing icons or face shots presented in a way that pokes fun at the cliche use of females to “glamorize” just about anything that sells, or the images of flying machines superimposed onto flying windsurfers, the spirit of exploration and freshness are there. This helps offset the writing, which must, of course, deal with the details and background of a story that is after all bound to the earth.
Michael Zeugin
mzeugin@andromeda.rutgers.edu

We realized our mistake at press time but decided to leave it the way it was because it made the story much more interesting (just kidding, sorry).

Woman to Magazine
Congrats on coming to the conclusion of how desperately we all need Ms. Lalli. A sincere smile always comes to my face when I see little articles with huge pictures that highlight successful spock-landing thrills of female-sailors like Temira Wagonfeld; however, the idea of improving my skills is the reason I’m reading. It is reassuring to know Ms. Lalli will now be sharing with us the insights of a female windsurfers perspective with progression as the ultimate goal. Bless you males, as you are always avaliable in abundance out on the water—ready to help; the advice of a woman sailor though is invaluable to helping us, help ourselves. Ms.(to the rescue) Lalli deserves the big bucks as she is exactly what we need and have patiently been waiting for. Looking forward Gina Lalli’s next take of things!!
kimberly
Wuesteney@aol.com

Women Sail Hard Too
Thanks so much for the cover shot! Never in a million years would I have thought I’d make the cover of a windsurfing magazine. Although I’m stoked you chose me, it’s great to see a picture of any woman doing something other than sailing flat water, looking pretty in a bikini, or appearing in a fashion advertisement. Women sail hard too, and pictures of them ripping will encourage other women to do the same. Nice work!

When I watched my first contest five years ago, the crowd was laughing at the women’s event. Those girls were solid sailors, but they just weren’t doing the same extreme tricks as the boys. Things have changed. At the Gorge Games this year, the women were all throwing forwards, sticking vulcans, and generally charging hard. It’s great to see, and hopefully the trend will continue, with more and more gals sailing “like the guys.”

In the past year, I’ve seen many, many talented female sailors pushing themselves to learn new-school moves. Maybe it’s because we have gifted role models like Daida, Iballa, and Collette, or maybe it’s because we’ve finally realized that this is a finesse sport, an activity that doesn’t necessarily favor the physically strong. Whatever it is, it’s great to see!
Temira Wagonfeld
two_mirrors@hotmail.com

Gender Equality
As a long-time subscriber and sailor, I just wanted you to know how much I enjoyed the “Makin’ Waves, Woman to Woman” column, Vol 9, Issue 2 by Gina Lalli. There are many women whom I know in this area who would like to try or resume the sport, but they need this specific message and content. I have already shown the column to several women, and they have been inspired by its message and humor. We need to encourage gender equality in this sport—it does beautiful the waves!
Dr. James Dillard
jndillard@mindspring.com

Feminine Advice
Since last summer, I have been thinking a lot about the reason for the limited coverage of women in windsurfing publications. I read Boards, Windsurfing, American Windsurfer and WindSport regularly, and always see them making efforts to address the women in our sport but often falling short. I know American Windsurfer received a lot of criticism from both men and women for their women’s edition last fall and Windsurfing received tons of criticism for their recent article showing the improvements in beginning windsurfing equipment. WindSport is a Canadian publication that frequently shows questionnaires asking women if they want to see features for them but never really seems to follow through.

So, why are women under-represented or misrepresented? I know for a fact there are a lot of you out there just in the Northwest because you are on the listserve or contact myself and Lisa Kirschner directly. Here are my thoughts and suggestion on fixing this situation.

1) Don’t outright criticize efforts by publications. Regarding the American Windsurfer women’s edition last August—women were writing frustrated letters for two reasons: some thought there weren’t enough pro-women represented, others didn’t like the model/windsurfer article, others didn’t like the bit about the restaurant owned by a man but employing all women.—Heck! Wasn’t it a great first step? Tell them that!

Regarding Windsurfing magazine—the beginning article with the two girls in minimal bikinis and the two “pro” male athletes all of whom have never windsurfed. The article was good, the pictures were distracting and unappealing to women. The pictures, unfortunately, distracted somewhat from the story. Maybe instead of bikinis, next time the girls can wear athletic swimsuits and pull their hair back in ponytails like they’re going to do something athletic. That would be more believable. Although, I wouldn’t mind if the boys were as tanned as the girls and in Speedos (girls like eye candy, too). 🙂

Be sure to remark on what is good about the articles first, then explain what you don’t appreciate, then make some positive suggestions on how this could be improved in the future.

2) Write more to the editors. They need to hear from us. Don’t just write criticism. Write about articles you like. Write to tell them how much you like the sport. JUST WRITE. LET THEM KNOW WE’RE OUT HERE.

3) When you renew your magazine subscription, switch it to your name from your husband’s or significant other’s name. I am told that only 10% of Windsurfing magazine’s subscribers are women. Therefore, they figure only 10% of their audience is female. HOLY SMOKES!!! I never realized this before; you probably haven’t either.

Let’s get these magazines to read more as two-gender mags (I’m thinking along the lines of Runners World quality where both sexes are addressed in the mag and on the website).

**Another place to put in your two cents is with manufacturers. Let them know if you like their portrayal of windsurfing either by who they sponsor and photos that appear in ads (do you like looking at a woman’s behind or down her cleavage? If I wanted to do that, I’d look in a mirror for the butt and look down for the cleavage). Fortunately, you can also include this in your letter to the editor since the manufacturers read the magazines, too.

**One more thing you can do to be more represented in this sport; enter competitions. There are fun comps and serious ones. Just to have your name on the roster is helpful. You don’t have to be a rock-star to compete. Through competition, you’ll get better as well. Happy sailing!
Erica Gerald
lerigerald@hotmail.com

Thanks for your thoughtfulness, we actually love criticism. So keep those letters coming—good or bad.

Framed AW
I have had an American Windsurfer Magazine framed and hanging in my office for several years now. I cannot, for the life of me, remember when I got it. It is the first issue of the magazine and I believe it was the summer of 1993. Is that correct? See attached picture.
Bill Jones
bill@harlowelaw.com 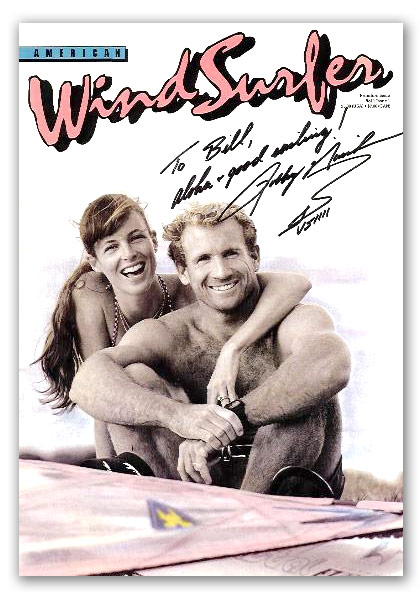 Women to Women
We are thinking the event we just had might just be something no one else in the country has ever tried. Perhaps a precedent-setting “Women’s Wonderfest?” We successfully taught 130 female windsurfers “newbies” and all the instructors were women! You are in the windsurfing inner circle, so you tell me! Historical event?

We had 160 women (130 women who wanted to get a ride) come out Saturday, August 24th! It was a magical event, very serene. It started out with a yoga session followed with massage sessions. The low wind and laid-back atmosphere made it perfect for teaching. Many of the women said they were inspired to come out because it was a “women teaching women” event.

Beth Powell Winkler, from Banana River Resort, did a super job master-instructing. It blew a lot of the instructors away, that the newbies just got on the wide boards and sailed away.

The new rigs are a revolution, allowing average people to access the sport. I have never seen so many people with a smile on their faces after attempting to windsurf! It looks like the days of the haggard, bruised and battered “newbie” might be behind us!?

I would say 25% of the women we taught we overweight (over 180 lbs) and they had a successful session. Most of the women were in the 40s, some young teenagers and a few close to 70 years old! Quite a cross-section of the population.

We taught most of the women how to sail up wind, down wind and how to turn in a 40-minute session! There were 8 sessions of 15 participants (the 8th session had more participants). I believe the combination of yoga and windsurfing could get a lot of people in much better shape and healthier. Got to keep the body moving!

The 1st “Women’s Learn to Windsurf Event” was held August 24th, 2002 (the 10th anniversary of Hurricane Andrew) at Fred Howard Park, Tarpon Springs FL! It was quite the Women’s Wonderfest, as you will see from the pictures. To view the pics and get more info please click (or type in) the address below: http://www.snailspace.net/clubfred/

See the article on the “Women Learn to Windsurf” that ran last Wed. in the St. Pete Times below. Another post event article is scheduled to run. If you can’t access the article by clicking on the highlighted address below just type in http://www.sptimes.com/2002/08/22/NorthPinellas/ and search for the article.
Siobhan Nehin
snaileret@aol.com