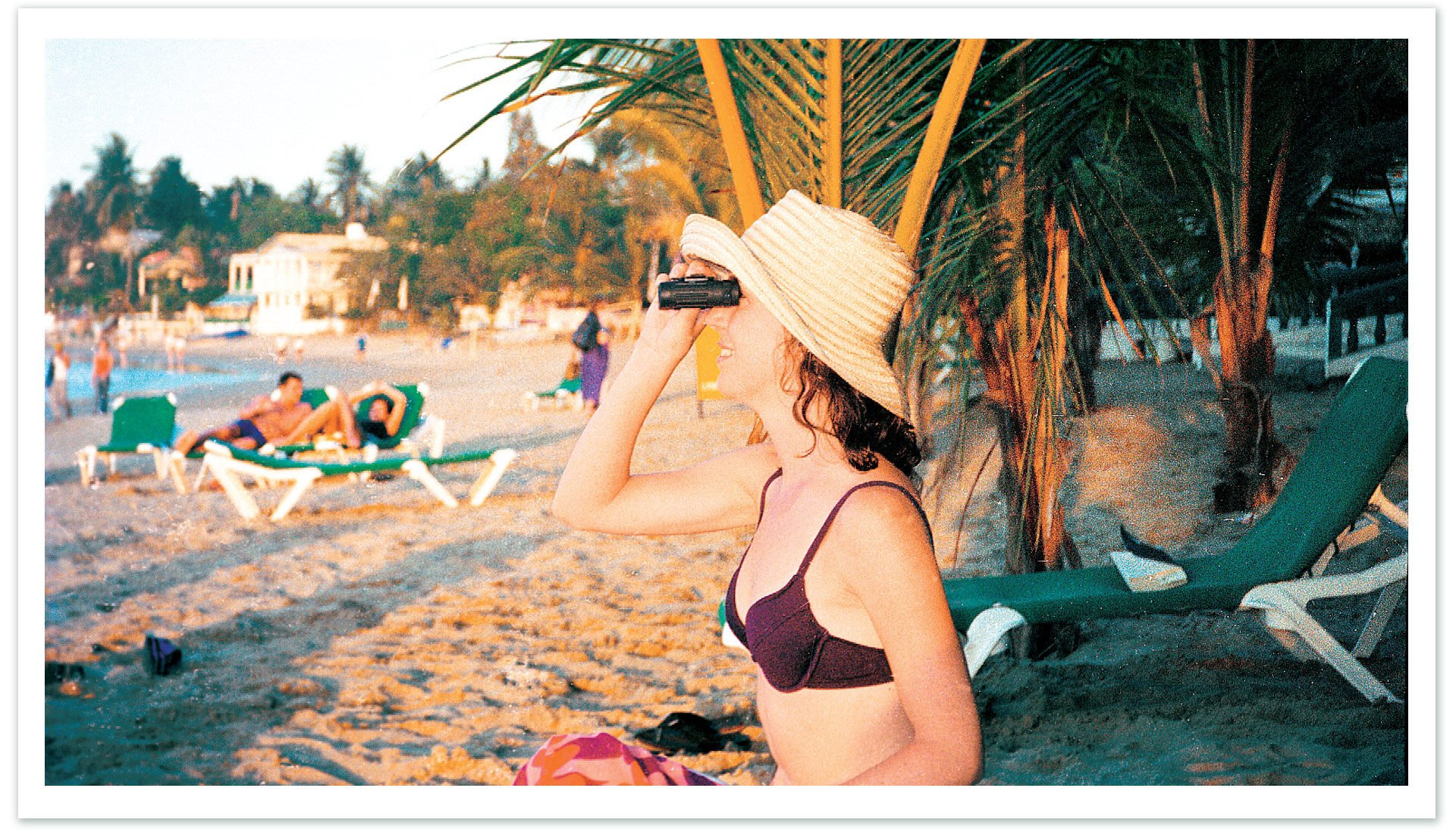 Tired of watching Elizabeth Horton of Boston, MA, contemplates the adage, “If you can’t beat them, join them.”  A self-proclaimed sideline sitter when it comes to physical adventure, Horton surprises herself and gets caught up and on board in one lesson.

EVERY MARCH I drop off my significant other at the airport and take care of his cats while he embarks on his annual March windsurfing trek. I do my own thing while he is away and politely peruse photos, listen to wistful tales of jumps and loops, and cringe at stories of trying to evade the reef and nearly drowning upon his return. This year a definite change in the wind, a step forward in our relationship, occurred. For Valentine’s Day, he gave me a trip to Cabarete, Dominican Republic—two weeks of sun and sand, wind and surf together.

Prior to Cabarete, the closest I have come to catching some air was stubbing my toe on his 85-liter Screamer  in the middle of our Boston apartment and hopping up and down. At the beach, I am the skinny girl slathered in SPF 30 and sporting a floppy straw hat. When not in the shade engrossed in a book, I wade in the ocean, jump waves, or sometimes play a few matches of smash ball. It is not that I lack coordination—I studied classical ballet for ten years and dance a mean meringue, salsa, and samba.  Nor is it fear of adventure—I have traveled much of the world and, as a general rule, take risks professionally and personally. When it comes to physical adventure, however, I am a sideline sitter. So on the day we departed for Logan Airport, with a nasty cold in my system and eight inches of snow on the ground, the only adventure on my mind was sucking down an umbrella rum drink with my feet in the sand.

My only exposure to real, live windsurfing was at Kalmus Beach in Hyannis three years ago. Like ballet, windsurfing looked easy but was difficult in reality. Listening to veteran windsurfers recount first attempts and explain what the sport entails was enough to discourage the most eager  potential aficionado, and certainly me. It’s an expensive sport. Windsurfing requires upper body strength. The wind will take over your life. Oh, the drama of it. I had seen the plethora of blisters, bruises, and bumps. I had witnessed the deep gashes that seemed to scream out for New Skin. I had flipped through the glossy windsurfing magazines, covers boasting photos of lone windsurfers about to be swallowed by gargantuan waves. If the goal was to deter newcomers in order to maintain exclusivity in the sport, it worked. I stayed away and my boyfriend didn’t push the issue.

Cabarete, I understood, was not solely a paradise for windsurfers. Upon arriving I was pleasantly surprised to find a laid back beach town rather than a glitzy resort. With options of mountain biking, horseback riding, and snorkeling in nearby Sousa, I had sturdy back up plans if I did tire of sun and sand. The first few days at the beach I rested and dodged the braiding ladies who swooned over my hair, hoping to capitalize on Bo Derek nostalgia. I made friends with the shoe shine boys who giggled when I asked, “¿Quien tiene novia?” and wiped the sand off my flip-flops as they would any fine Italian dress shoes. I shook hands with each jewelry vendor who passed by, offering hands and addressing me “Amiga” although I purchased nothing.

Everyday at midday I sat back to watch the windsurfers take their places. With the wind came an increased energy level and giddy preparations. People of all shapes and sizes backed angled sails and boards into the shallow waters. Once out there, it was pure Dominican meringue—sails shifting and turning, colors and partners intersecting. I couldn’t have choreographed it better.

At around 2:30 my boyfriend would race up the beach, panting and dripping. He would gleefully collapse on the chaise next to mine and then devour half a sandwich. Wiping his mouth with the sleeve of his Pro-Am shirt, he’d stand up. “I think I’m going back out,” he’d say, and motion to the BIC Center staff for a smaller sail. About an hour later he would reappear, drenched and kid-like. “I’m really done now,” he’d say, sitting down with a bottle of agua sin gas. “Gotta pace myself.” Fifteen minutes later he would be beach starting, and, in a matter of moments, become a small speck of yellow and orange sail heading further away.

At night, I was surrounded by spent but content windsurfers and talk of conditions and sail size. “It’s an inexplicable rush—truly a spiritual experience,” remarked one windsurfer from Rhode Island. I saw several women, many my size, partaking in the aprés windsurf banter. Looking down at the smooth palms of my hands, I felt I hadn’t quite earned my piña colada.

On the beach the fourth day I started interviewing women I met. First, I was told if I ski or snowboard, I’d be a great windsurfer. (Alas, I do neither.) Then I was told windsurfing is a continual learning process, and not for the impatient or easily frustrated. (That’s me.) One woman recounted how she first got on a board in April 2000 and now, almost a year later, is skilled enough to actually enjoy the sport a little. The most pertinent piece of advice came from a self-proclaimed windsurfing widow, a sometimes windsurfer, and mother of three. “I know men who gave it [windsurfing] up for their wives and children,” she said. “They aren’t happy people. I do my own thing, we windsurf together when we can, or we take turns. But whatever you do, don’t ask your boyfriend to teach you.”

By Sunday, day five, I was off Comtrex and down to two mini packs of Kleenex a day. Sunday is family day at the beach and the Dominicans came out to celebrate and relax. It is, after all, their beach, and they arrived with casseroles, coolers of Cerveza Presidente, and children—some in swimsuits, some in underwear, and others in just the skin God gave them. There were plenty of waves but no wind that particular Sunday. A few frustrated beginners repeatedly fell while uphauling and resurfaced to find their wide boards submerged by scrambling kids. Maybe tomorrow, I thought to myself.

I woke up ready to try. Rejecting perfectly sound advice, I enlisted my boyfriend’s help. He turned in his big sail and narrow board for beginner gear and the two of us waded out into the ocean. “Now remember, I’m on your side,” he said, as I stood facing the board. Hopping up and kneeling on the board was easy for me, but trying to raise the sail was nearly impossible. I couldn’t put together all the instructions he gave me. Filled with water, the sail was heavier than I thought and I tried to muscle it straight up. Haul and fall, haul and fall. Expletives burst out of my mouth more than once and I noticed there were kids in the water around me. I went under again, ears popping, and lost my sunglasses and hat for a moment while sunblock stung my eyes.

BREAKING DOWN basic techniques and wind directions on land helps beginners, like the author, glean skills and gain confidence to get in the water.  Steffan Lloyd of Carib Bic Center has been teaching rookies since he landed in the Caribbean three years ago.

“Just do it,” my boyfriend yelled in frustration, unaware of his semblance to a Nike commercial. “I don’t know HOW!” I screamed back, the force of my own voice shoving me off the board. I looked over at a young, string bikini-clad girl whose completely dry ponytail flickered in the wind as she made a graceful turn. “It’s only my second time ever,” she shrugged when I asked how long she had been windsurfing. I gave up and trudged back to the beach, leaving my boyfriend in the water with beginner equipment. Pissed off and banged up, I went to bed early and for the next two days made excuses  to rest my aching muscles and bruised ego.

On Wednesday, I signed up for a private lesson with a stranger. This was a strategic move, both for my future as a windsurfer and the future of my relationship with my boyfriend. Steffan Lloyd, an instructor at Carib Bic Center and windsurfer originally from Wales, didn’t mind being bombarded with my questions. I asked about balance, upper body strength, and athleticism. He smiled and guaranteed that he could get me up, out, turning, and back in one lesson. “Unless you consume three meals a day at Burger King and weigh 300 pounds, we can teach you. With all of the beginner equipment that has been manufactured, the industry has made it easier than you think for beginners.” My boyfriend dashed back to the hotel to get the camera.  If I  were going to windsurf, I wanted proof.

We started on the sand. Steffan taught me about the wind and showed me how to uphaul on a beached  rig. “It’s not about the strength of you back,” he instructed, “just stand up straight as you go and your body weight will lift it.” He spent several minutes showing me the technique on the beach before going out in the water. “Once you have the sail up and perpendicular to the board, step and lean back.”

To my amazement, I managed to uphaul on my first try. I had told myself I would be happy just getting up on the board and pulling up the sail. In the first twenty minutes, Steffan had me doing more than that. I was sailing and turning—slowly, but definitively.  I got the feeling of a sail filled with the wind and liked it.

Sailing back was another thing. After turning I suddenly became aware of where I was and what I was doing. I could no longer hear Steffan’s voice and panicked.

“Stop doing ballet on the board,” said Steffan, when I finally got back in. “You’re doing something totally different on the way back. Don’t over think it.” Out of kindness or company guarantee, he spent a total of ninety minutes instructing me. Finally, I triumphantly sailed back after a frustrating session of floating downwind. Steffan congratulated me and urged me to take a break, giving it another try the next day. “It’s a mentality,” he said, “you had the technique in the first twenty minutes.”

My boyfriend looked up from the camera and grinned. “Now I’ll never see you on windy days,” he joked, patting my back. I scarfed down two sandwiches and we took a long nap in the Cabarete sun.

That night I drank my piña colada with pride and, together with the other windsurfers, discussed conditions and what size sail I should buy. After all, I have a lot of work to do before this summer at Kalmus Beach.

Elizabeth Horton is a freelance writer and marketing communications consultant.  She is the founder and principal of Writewell, a writing services company in Cambridge, MA.