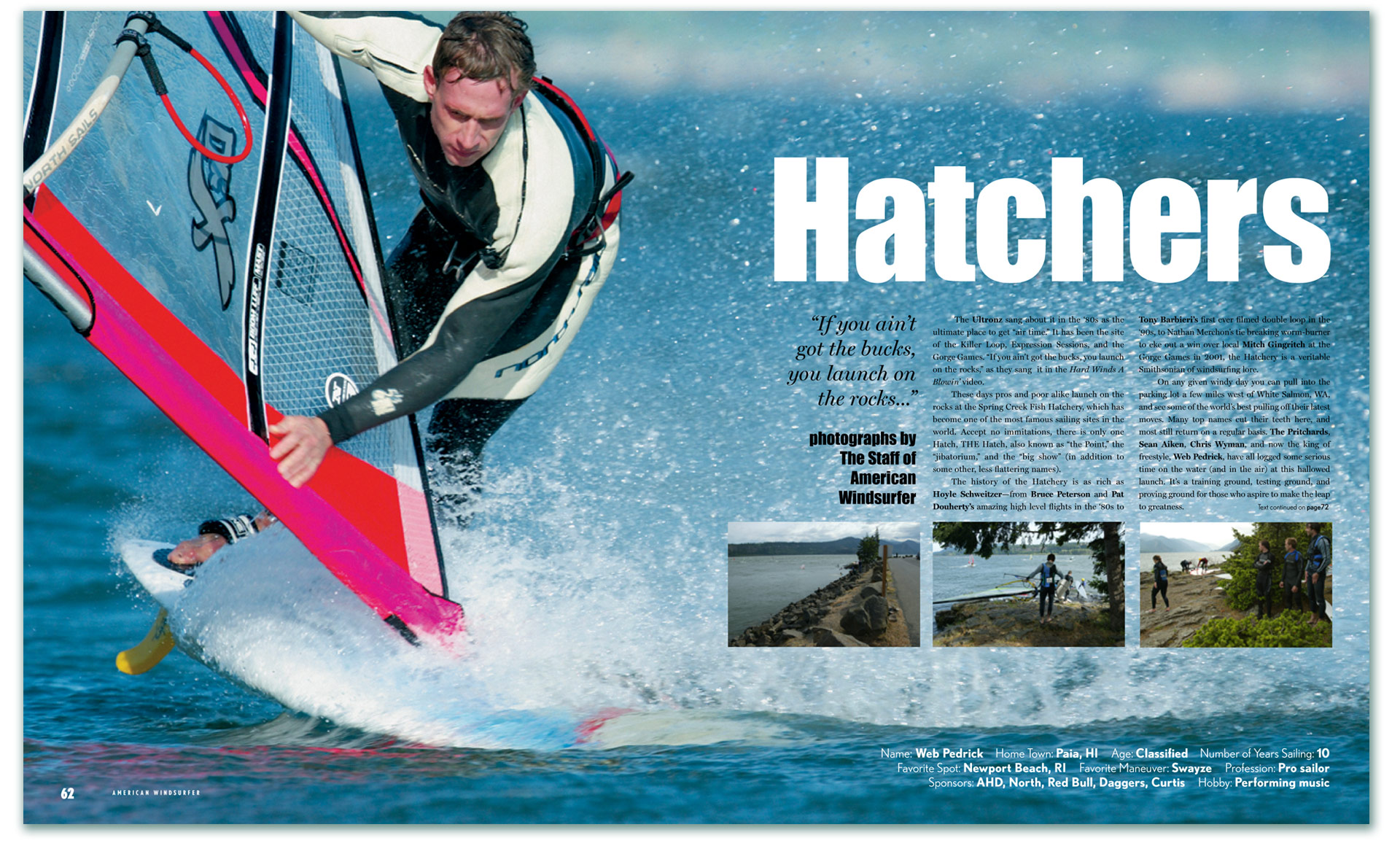 “If you ain’t got the bucks, you launch on the rocks…”

The Ultronz sang about it in the ‘80s as the ultimate place to get “air time.” It has been the site of the Killer Loop, Expression Sessions, and the Gorge Games. “If you ain’t got the bucks, you launch on the rocks,” as they sang it in the Hard Winds A Blowin’ video.

These days pros and poor alike launch on the rocks at the Spring Creek Fish Hatchery, which has become one of the most famous sailing sites in the world. Accept no imitations, there is only one Hatch, THE Hatch, also known as “the Point,” the “jibatorium,” and the “big show” (in addition to some other, less flattering names).

The history of the Hatchery is as rich as Hoyle Schweitzer—from Bruce Peterson and Pat Douherty’s amazing high level flights in the ‘80s to Tony Barbieri’s first ever filmed double loop in the ‘90s, to Nathan Merchon’s tie-breaking worm-burner to eke out a win over local Mitch Gingritch at the Gorge Games in 2001, the Hatchery is a veritable Smithsonian of windsurfing lore.

On any given windy day you can pull into the parking lot a few miles west of White Salmon, WA, and see some of the world’s best pulling off their latest moves. Many top names cut their teeth here, and most still return on a regular basis. The Pritchards, Sean Aiken, Chris Wyman, and now the king of freestyle, Web Pedrick, have all logged some serious time on the water (and in the air) at this hallowed launch. It’s a training ground, testing ground, and proving ground for those who aspire to make the leap to greatness.

“I sail here because this is where the competition will be,” says the back-looping, forward-chucking, spock-landing 27-year old. “The Hatch is also the place to sail if you want to be seen. You’re kind of on stage when you sail there, so I’m a little less nervous sailing in front of people when it’s competition time.”

The Hatch is also a gathering place and often has a party-like atmosphere. In the ‘80s and early ‘90s people would show up in crazily contrapted “gorge mobiles,” sometimes even in costume. The Ultronz once played a concert at the point (for a video), and Rod Paramenter shot hundreds of hours of videotape, often while WindWeapons challenged windsurfers for swells.

“Back in the day the Hatch was a total party,” says “Bingen” Bart Vervloet. “It’s still a really fun place to hang out.”

People come to sail, but also sometimes just to watch from the natural amphitheatre formed by the rock levy just downwind of the point. If you hear that somebody “big” is in town, and want to catch that person on the water, odds are good they’ll show up at the Hatchery at some point.

“You can learn so much just by watching the other sailors,” says Wagonfeld. “You think you’ve seen it all, and then somebody like Web shows up and pulls off some new move. Next day everybody is out there trying it.”

Maybe it’s the natural amphitheatre atmosphere, maybe it’s the abundance of available talent, or the fact that the Hatch is also a photographer’s dream, OR the fact that American Windsurfer’s new office is across the road—that we decided to start not only a series of action photos for the magazine—shot at the Hatch on a regular basis—but also a website gallery at www.americanwindsurfer.com that will be updated regularly with photos generated by staff and guest shooters.

So stay tuned, sailors, the next shots could be of your favorite star, friend, a future pro, or even YOU.

Don’t forget to smile at the camera…