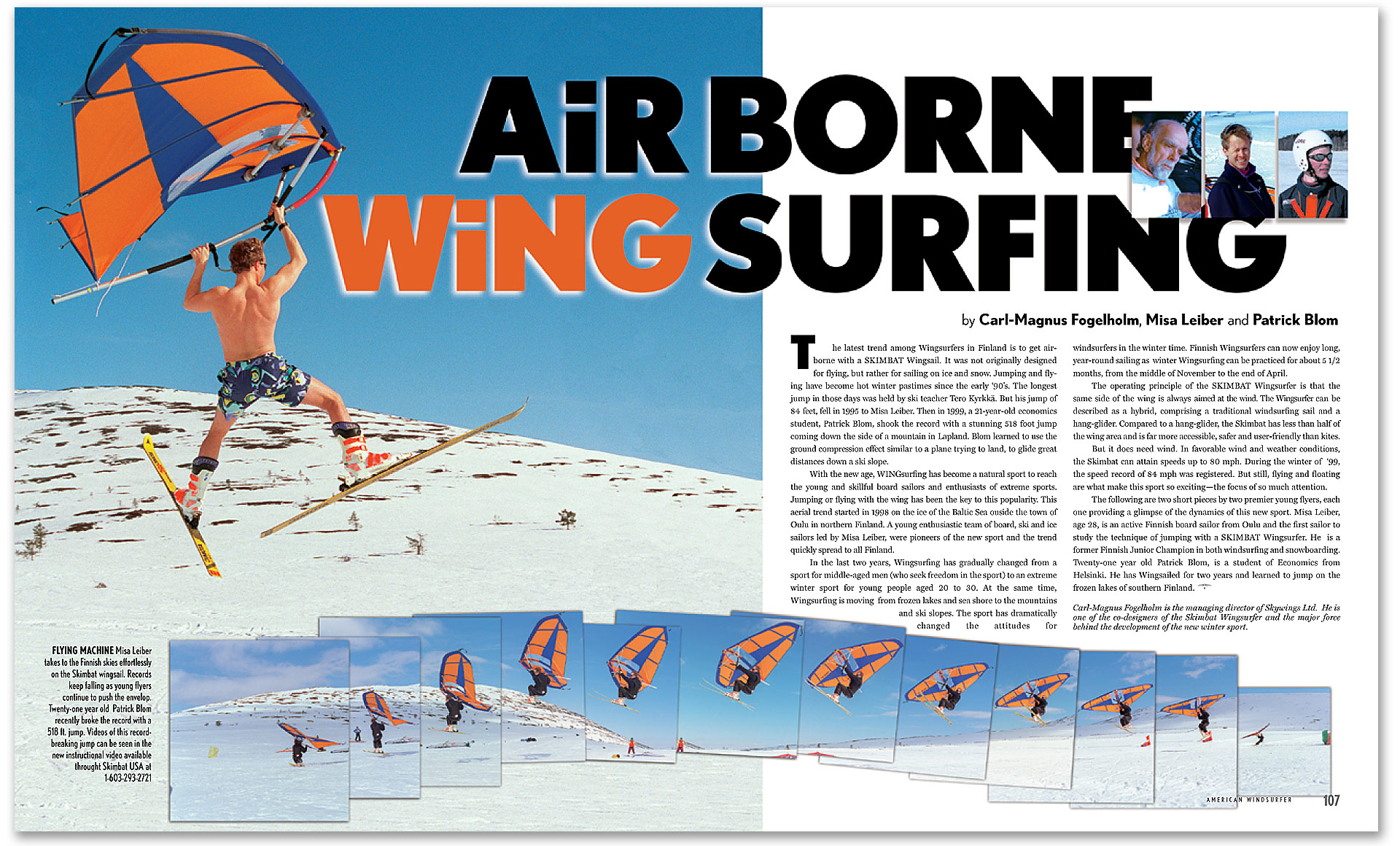 The latest trend among Wingsurfers in Finland is to get airborne…

THE LATEST TREND among Wingsurfers in Finland is to get airborne with a SKIMBAT Wingsail. It was not originally designed for flying, but rather for sailing on ice and snow. Jumping and flying have become hot winter pastimes since the early ‘90’s. The longest jump in those days was held by ski teacher Tero Kyrkkä. But his jump of 84 feet, fell in 1995 to Misa Leiber. Then in 1999, a 21-year-old economics student, Patrick Blom, shook the record with a stunning 518 foot jump coming down the side of a mountain in Lapland. Blom learned to use the ground compression effect similar to a plane trying to land, to glide great distances down a ski slope.

With the new age, WINGsurfing has become a natural sport to reach the young and skillful board sailors and enthusiasts of extreme sports. Jumping or flying with the wing has been the key to this popularity. This aerial trend started in 1998 on the ice of the Baltic Sea ouside the town of Oulu in northern Finland. A young enthusiastic team of board, ski and ice sailors led by Misa Leiber, were pioneers of the new sport and the trend quickly spread to all Finland.

In the last two years, Wingsurfing has gradually changed from a sport for middle-aged men (who seek freedom in the sport) to an extreme winter sport for young people aged 20 to 30. At the same time, Wingsurfing is moving from frozen lakes and sea shore to the mountains and ski slopes. The sport has dramatically changed the attitudes for windsurfers in the winter time. Finnish Wingsurfers can now enjoy long, year-round sailing as winter Wingsurfing can be practiced for about 5 1/2 months, from the middle of November to the end of April.

The operating principle of the SKIMBAT Wingsurfer is that the same side of the wing is always aimed at the wind. The Wingsurfer can be described as a hybrid, comprising a traditional windsurfing sail and a hang-glider. Compared to a hang-glider, the Skimbat has less than half of the wing area and is far more accessible, safer and user-friendly than kites.

But it does need wind. In favorable wind and weather conditions, the Skimbat can attain speeds up to 80 mph. During the winter of ‘99, the speed record of 84 mph was registered. But still, flying and floating are what make this sport so exciting—the focus of so much attention.

The following are two short pieces by two premier young flyers, each one providing a glimpse of the dynamics of this new sport. Misa Leiber, age 28, is an active Finnish board sailor from Oulu and the first sailor to study the technique of jumping with a SKIMBAT Wingsurfer. He is a former Finnish Junior Champion in both windsurfing and snowboarding. Twenty-one year old Patrick Blom, is a student of Economics from Helsinki. He has Wingsailed for two years and learned to jump on the frozen lakes of southern Finland.