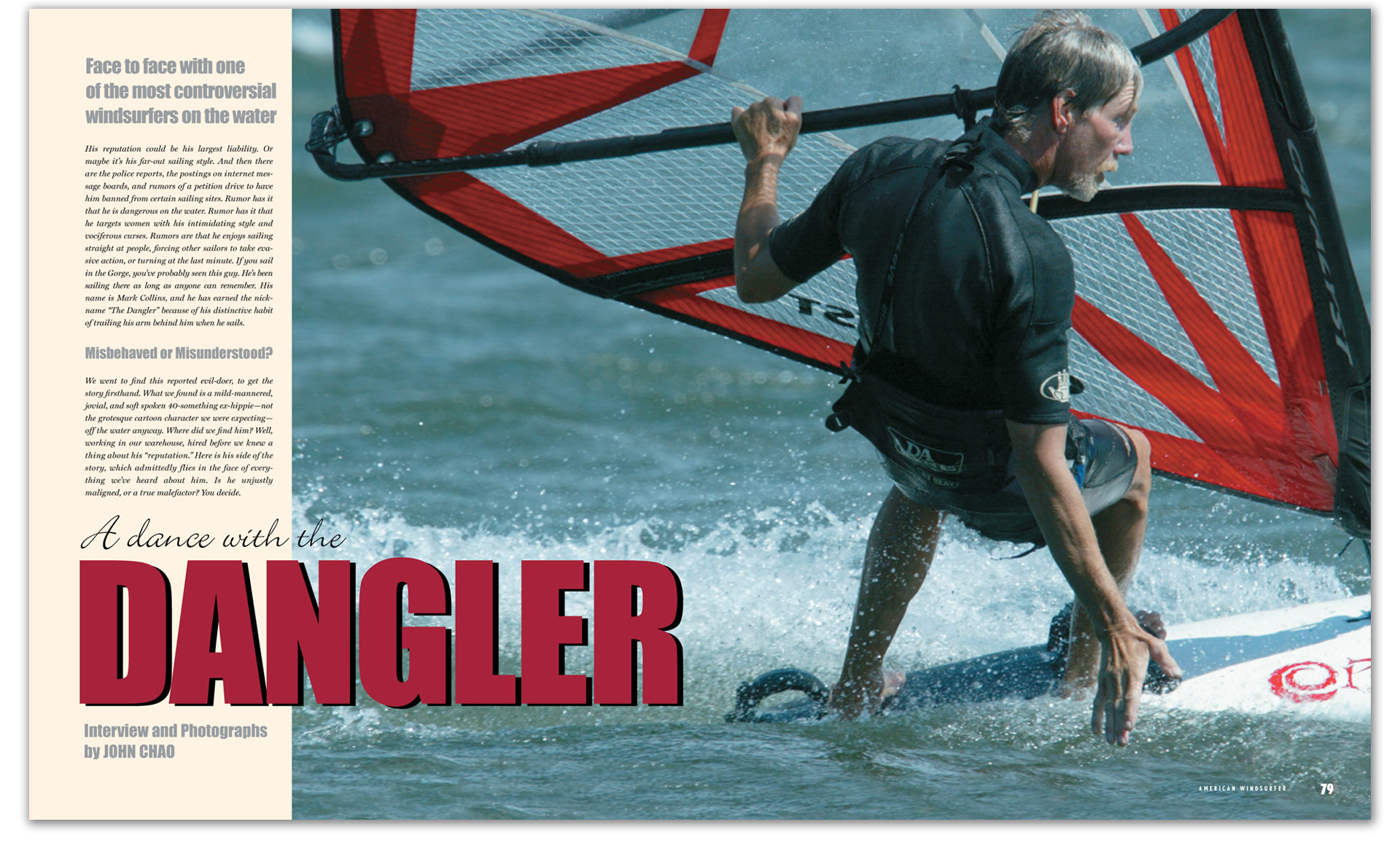 His reputation could be his largest liability. Or maybe it’s his far-out sailing style. And then there are the police reports, the postings on internet message boards, and rumors of a petition drive to have him banned from certain sailing sites. Rumor has it that he is dangerous on the water. Rumor has it that he targets women with his intimidating style and vociferous curses. Rumors are that he enjoys sailing straight at people, forcing other sailors to take evasive action, or turning at the last minute. If you sail in the Gorge, you’ve probably seen this guy. He’s been sailing there as long as anyone can remember. His name is Mark Collins, and he has earned the nickname “The Dangler” because of his distinctive habit of trailing his arm behind him when he sails.

We went to find this reported evil-doer, to get the story firsthand. What we found is a mild-mannered, jovial, and soft spoken 40-something ex-hippie—not the grotesque cartoon character we were expecting— off the water anyway. Where did we find him? Well, working in our warehouse, hired before we knew a thing about his “reputation.” Here is his side of the story, which admittedly flies in the face of everything we’ve heard about him. Is he unjustly maligned, or a true malefactor? You decide.

American Windsurfer: Why are you the most hated guy in the Gorge?
Mark Collins: I’m not hated. Who hates me? [Laughing] Nobody hates me…
AW: It seems like there’s a lot of controversy surrounding you, your sailing style and all the women that are terrified of you – that’s what we hear on the street here.
MC: Oh women, women terrified of me [laughing]. That could be good, I don’t know… No, you know I’ve given it some thought, and I realized that the reason some people, some women, yeah, I guess it is only women that I’ve ever really, I’ve had guys mad at me too, but uh, on the water I don’t treat ‘em any different—guy or girl– I only treat ‘em as… are they a rookie, you know you kind of identify people—there’s all different levels. You’ve got to be aware of what’s going on out there. I don’t really look at it as “this is a girl or this is a guy,” I look at it as “this is the captain of a vessel out there,” the captain of their craft.
AW: Well why is it that there’s so much controversy surrounding you?
MC: Well I think I windsurf different than some people, I don’t know, or maybe it is my style—I’m just out there to surf on swells. I jump on a swell, I’m aware of what’s going on around me, I look, but jump on a swell, and I’m going down the swell, and there’re people going back and forth, you might go by eight or 10 people on that swell. But if you’re going slow and you’re with the swell, you’re in control, you’re not endangering anybody, just having fun. People want to jump, they can jump on the swell I’m on, the only thing you have to do is try not to run into anybody out there.

AW: But you seem to scare the shit out of people by coming close to them.
MC: [Laughing] Yeah I had a guy ask me once ‘cause I was all mad at him ‘cause he came close to me. And he asked me, “So what, are you a hypocrite?” I thought about it, and it doesn’t bother me if I come close to somebody because I’m in control and I know what I’m doing, but if somebody comes close to me it scares me, so I guess I am a hypocrite.
AW: Wait, he asked you if you were a hypocrite because you get scared when somebody gets close to you?
MC: Well he came close to me, and I was giving him a hard time about it, but he was like all, “you come close to me, I’ll come close to you,” kind of thing, I guess. I thought about that and said, “yeah, I guess I could scare people if I sail close to them,” so I don’t go close to people on purpose, but, on occasion, it’s unavoidable. You have a lot of people, maybe you have three or four people coming at you, depending on what tack you are on, and sometimes you gotta kinda squeeze between, or you know. But no, I don’t intentionally try to scare people or go close to them, I’m just out there to have fun.
AW: It seems like the controversy around you, there’s even talk of a website that…
MC: No, there’s no website. I think there’s this; it all started with this little core group of people. I don’t know who they are, but they started sitting on the rocks and talking about people out sailing, you know. I think sometimes they see me out sailing, and I’m sailing with my friends. And we kinda intentionally go close to each other. But if you’re on the water and you’re messing around with your buddy or something, somebody on the rocks says, “oh, the Dangler out there almost run into that guy!”
AW: How did you get the nickname Dangler ?
MC: Oh wait a minute! Who brought that up? I guess I did [laughing]. No, I don’t know, that came about a year ago. I’ve had a lot of other nicknames, but that one kind of stuck.
AW: What were some of the other nicknames?
MC: Oh, people call me “the Rastaman.” I like that nickname—Rastaman! That’s ‘cause of my dog (Rasta) I suppose.
AW: So tell me how did that nickname come about? Is it your style? Do you look like you’re dangling out there?
MC: I can’t tell you the X-rated response to that…
AW: Try…
MC: [Laughing] Well, some girl came up to me and asked me, “Why do they call you the Dangler?” and I had a real good response for her, but it’s not suitable for publication. But uh, it’s because I trail my hand in the water. You used to race, you know the old racing days, you indicate which way you’re going—you’re supposed to point. I guess I got it from sailing–you make eye contact with somebody, I point which way I’m going. There’s no question that way, right? If I’m not pointing, I have my hand free, I trail it in the water. Dangling my hand in the water. It’s not something I was really aware of.
AW: You have a different sailing style: you have both hands with an underhanded grip. Tell me about how you’ve come to have this unique style.
MC: I don’t know. People have asked me about it, I’m not aware of stuff. I’m kind of in a Zen state when I’m out there.
AW: You think people pick on you because you are different? That your style is so different, and that’s why this whole thing has escalated?
MC: People don’t pick on me. I get nothing but good vibes out there at the Hatchery, or when I’m sailing (other places). But there’s like a rumor thing kind of happens and it turns into almost an urban legend. So people that don’t know me, that I’ve never talked to, don’t recognize or have never seen, might have heard some weird thing about me. I don’t know what they’ve heard or, you know, I’ve heard weird stuff, I’ve heard people talking about the Dangler in Mexico, you know, weird places. Walking by a bar—Dangler, it’s such a weird word, you just can’t miss it, right? But it’s not a real negative thing either, I don’t see it as a negative thing. I think it’s kind of funny really.
AW: You’re saying your notoriety has gotten as far as Mexico?
MC: Yeah, I guess it did, all of a sudden kind of – ‘cause people would recognize me before, but they didn’t have a name to attach to that recognition so, I don’t know, maybe “Dangler” has a life of its own.

AW: But was it precipitated by, I mean, it seems like the main problem is you sailing very close to people. And somehow they feel like you’ve endangered them. Does that make any sense to you? Maybe that’s a cause?
MC: Well, it goes back to the deal, if I jump on a swell, I’m not in the footstraps, and I’m basically holding the sail with one hand, de-powered. I’m surfing the swell, I’m on the swell pretty much going where the swell is going. I don’t have a–it’s not that I don’t have control–but I can’t change direction real suddenly. I don’t have power in the sail, all I can do is surf this way or surf that way. So I’m surfing the swell, and people are going back and forth, as windsurfers tend to do. And so I’m looking at people this way, looking at people that way, I can do a cutback, I can keep going, but people see you on a swell, upwind, coming at ‘em, it freaks them out. They think you’re powered up and screaming at them, and you’re going to kill ‘em. But you know, if worse comes to worse, I just jump off the board. Just ditch. You’re going slow because you’re on a swell, you’re not going fast. If I was Josh Stone, ripping up swells like they do on Maui, you know big waves or something, it could be dangerous. But I don’t consider myself dangerous. Theoretically, I am not under power, I’m just surfing. Like I said, I’ve probably logged more hours than anybody else out there, never been hurt, and I’ve never hurt anybody. So I’m not an accident waiting to happen, I’m just the opposite. I’m a careful, cautious guy.
AW: And if you believe that…
MC: I am! I’ve logged a lot of hours in helicopters, logged a lot of hours in very dangerous situations.
AW: Tell me about your background, where do you come from?
MC: I was born in Seattle, kinda moved all over, military family, I was a Navy brat. So, we lived all over.
AW: You were in Vietnam?
MC: Yeah, briefly, just at the end. I was in the military for three years.
AW: Doing what?
MC: I was on a ship—we did underway reparations on a task force in the Mediterranean. Big supply ship, we’d sling-load stuff over to carriers…
AW: Why do you think you like windsurfing so much?
MC: I don’t know. It’s an incredible feeling. It’s the closest thing to flying and freedom and it’s just incredible. Just thinking about it, you can get high off the thought of windsurfing. Driving there, you just get all amped up, it’s just going to be a killer day. It’s just a great feeling.
AW: What are some of the things you would like people to know about you, that you never tell?
MC: I don’t want anybody to know anything about me [laughing]. I don’t even know if I want to do this whole deal [interview]. I just want to be anonymous. I don’t want to be “The Dangler” [laughing].
AW: So you don’t want to be famous?
MC: No, no. I don’t want to be famous. Fame would be the last thing I want.
AW: You don’t want women to shudder when they hear the name “Dangler.”
MC: Shudder? That might be good…[laughing] No, I don’t want them to fear the Dangler. No need for anybody to fear the Dangler.