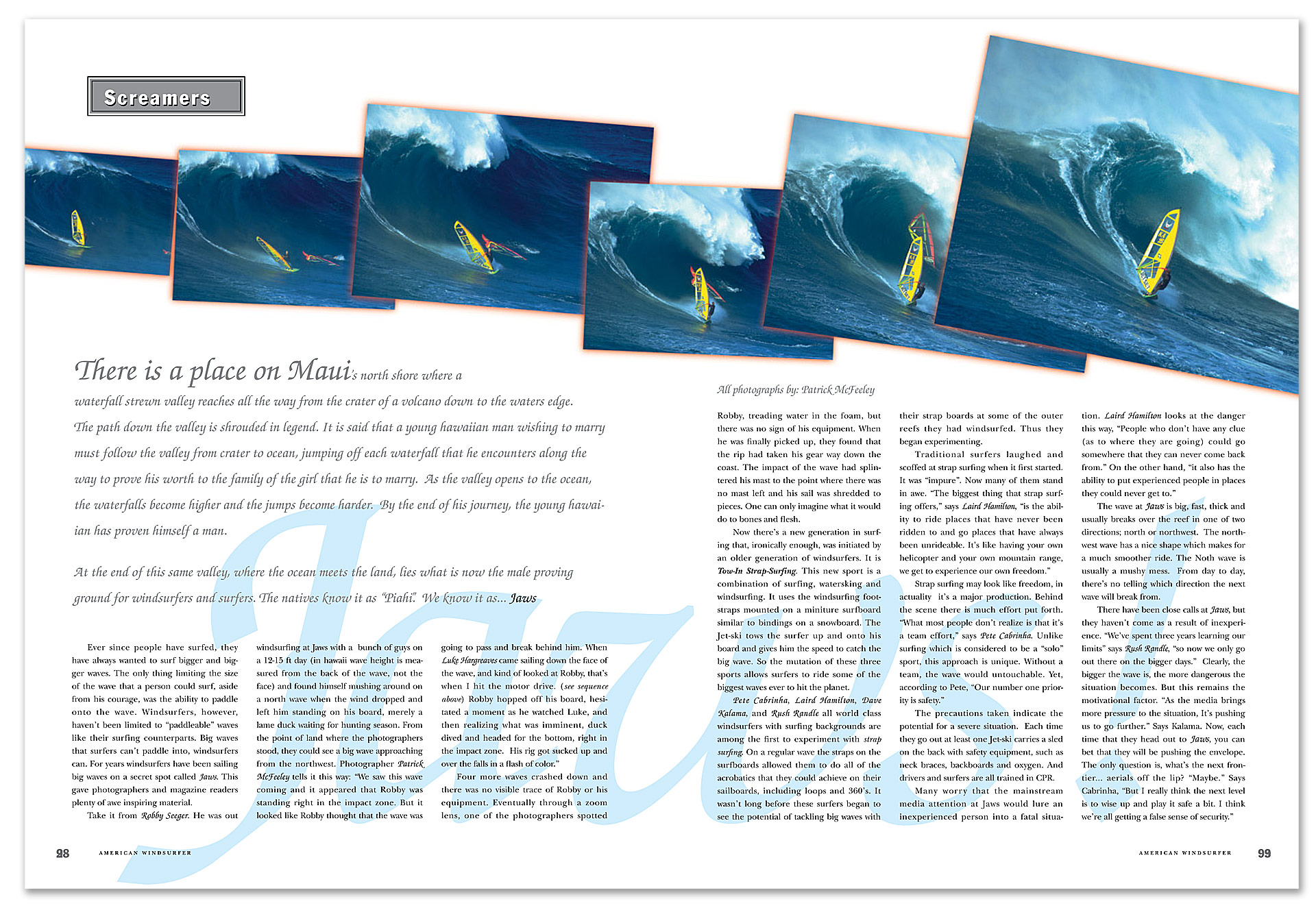 There is a place on Maui’s north shore where a waterfall strewn valley reaches all the way from the crater of a volcano down to the water’s edge. The path down the valley is shrouded in legend. It is said that a young hawaiian man wishing to marry must follow the valley from crater to ocean, jumping off each waterfall that he encounters along the way to prove his worth to the family of the girl that he is to marry. As the valley opens to the ocean, the waterfalls become higher and the jumps become harder. By the end of his journey, the young hawaiian has proven himself a man. At the end of this same valley, where the ocean meets the land, lies what is now the male proving ground for windsurfers and surfers. On Maui, it’s known as “Piahi.” We know it as… Jaws

EVER SINCE PEOPLE HAVE SURFED, they have always sought to surf bigger and bigger waves. The only factor limiting the size of the wave that a person could surf, aside from his courage, was his ability to paddle onto the wave. Windsurfers, however, haven’t been limited to “paddle-able” waves like their surfing counterparts. Powered-up windsurfers are free to ride the more challenging and remote breaks that can’t be reached by surfers. However, now there’s a new generation in surfing that ironically enough was initiated by an older generation of windsurfers. It’s called tow-in strap surfing and it’s allowing surfers to ride some of the biggest waves on the planet.

Pete Cabrinha, Laird Hamilton, Dave Kalama, and Rush Randle, all mature and experienced world class wave sailors with surfing backgrounds were the first to experiment with strap surfing. On regular size waves, straps on the surfboards allowed them to do all of the acrobatics that they could achieve on their sailboards, including loops and 360’s. It wasn’t long before they began to see the potential of tackling bigger waves with their strap surfboards at some of the outer reefs where they went windsurfing. However, the limitation of paddling locomotion still remained. To combat this problem, they began experimenting with getting onto waves water-ski style behind a Jet-ski at outer reefs on Maui that were more familiar to them than Jaws.

It wasn’t long before they began to see the potential of tackling bigger waves..

Getting to know the wave at Jaws first from the perspective of a windsurfer helped the guys develop their method for tow-ins. The wave at Jaws is big, fast, and thick and usually breaks over the reef in one of two directions- north or northwest. The northwest wave has a nice shape which makes for a much smoother ride. The north wave is usually a mushy mess. On any big day, there’s no telling which direction the next wave will break from.

“We saw this wave coming and it appeared that Robby was standing right in the impact zone.

Take it from Robby Seeger. He was out windsurfing at Jaws with a bunch of guys on a 12-15 ft day (in Hawaii wave height is measured from the back of the wave, not the face) and found himself mushing around on a north wave when the wind dropped and left him standing on his board, merely a lame duck waiting for hunting season. From the point of land where the photographers stood, they could see a big wave approaching from the northwest.

Photographer Patrick McFeeley caught the incident on film and recounts: “We saw this wave coming and it appeared that Robby was standing right in the impact zone. But it looked like Robby thought that the wave was going to pass and break behind him. When Luke Hargreaves came sailing down the face of the wave, and kind of looked at Robby, that’s when I hit the motor drive. (see sequence above) Robby hopped off his board, hesitated a moment as he watched Luke, and then realized what was imminent. He dove for the bottom, right in the impact zone. His rig got sucked up and over the falls in a flash of color.”

At a place like Jaws, the potential for a severe situation is high and many worry that the mainstream media attention that Jaws is getting will lure someone inexperienced into a fatal situation. Laird Hamilton looks at the danger this way, “People who don’t have any clue could go somewhere that they can never come back from. But it also has the ability to put experienced people in places that they could never get to.”Four more waves crashed down and there was no visible trace of Robby or his equipment. Eventually through a zoom lens, one of the photographers spotted Robby, struggling to tread water in the foam, but there was no sign of his equipment. When he was finally picked up, they discovered that the rip had taken his gear way down the coast. The impact of the wave had splintered his mast to the point where there was no mast left and his sail was shredded. One can only imagine what it would have done to bones and flesh.

In fact, many traditional big wave surfers who laughed and scoffed at strap surfing when it started have begun to venture out to Jaws. It has renewed their respect for the innovation and its pioneers. “The biggest thing that strap surfing offers,” says Laird, “is the ability to ride places that have never been ridden and to go places that have always been unrideable. It’s like having your own mountain range and the first helicopter ever made. We get to experience our own freedom.”

The question remains: what is the next frontier?

But while it may look like freedom, it’s really more of a production. Behind the scenes there is a lot of effort put forth. “What most people don’t realize and that they are most impressed with when they find out” says Pete Cabrinha “is that it’s a team effort.” For a sport considered to be one of the most individual there is, the team approach is unique. Still, according to Pete, “Our number one priority is safety.” Every day that they go out, at least one of the Jet-Skis has a sled on the back with safety equipment, neck braces, backboards, and even hospital grade oxygen. All of them are also trained in CPR.

There have been close calls at Jaws and they haven’t been a result of inexperience. “We’ve spent three years learning our limits” says Rush Randle, “so we only go out there on the bigger days.” Clearly, the bigger the wave, the more dangerous the situation. The danger of Jaws has and will continue to be a motivational factor, not only for the surfer, but for the photographers and media as well. “As the media brings more pressure to the situation, it’s pushing us to go further.” Comments Dave Kalama. Every time that the team tackles Jaws, you can bet that they will be pushing the envelope. The question remains: what is the next frontier? Aerials off the lip? “Maybe,” Cabrinha replies. “But I really think the next level is to wise up and play it safe a bit. I think we’re all getting a false sense of security.”