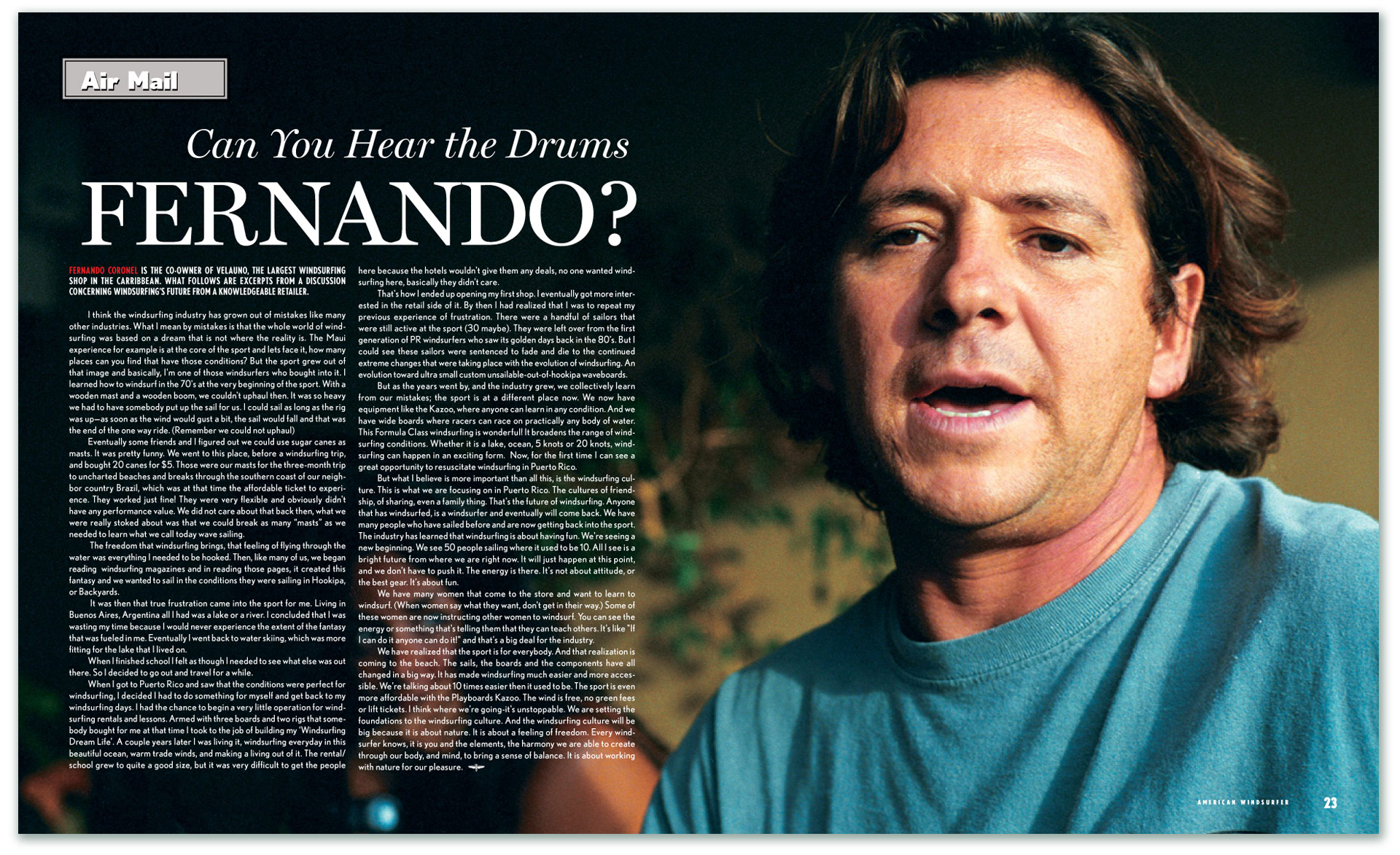 Friends and I figured out we could use sugar canes as masts. It was pretty funny.

Fernando Coronel is the co-owner of Velauno, the largest windsurfing shop in the Caribbean. What follows are excerpts from a discussion concerning windsurfing’s future from this knowledgeable retailer.

I think the windsurfing industry has grown out of mistakes like many other industries. What I mean by mistakes is that the whole world of windsurfing was based on a dream that is not where the reality is. The Maui experience, for example, is at the core of the sport and let’s face it, how many places can you find that have those conditions? But the sport grew out of that image and basically, I’m one of those windsurfers who bought into it. I learned how to windsurf in the 70’s at the very beginning of the sport. With a wooden mast and a wooden boom, we couldn’t uphaul then. It was so heavy we had to have somebody put up the sail for us. I could sail as long as the rig was up—as soon as the wind would gust a bit, the sail would fall and that was the end of the one-way ride. (Remember we could not uphaul)

Eventually, some friends and I figured out we could use sugar canes as masts. It was pretty funny. We went to this place, before a windsurfing trip, and bought 20 canes for $5. Those were our masts for the three-month trip to uncharted beaches and breaks through the southern coast of our neighbor country Brazil, which was at that time the affordable ticket to experience. They worked just fine! They were very flexible and obviously didn’t have any performance value. We did not care about that back then, what we were really stoked about was that we could break as many “masts” as we needed to learn what we call today wave sailing.
The freedom that windsurfing brings, that feeling of flying through the water was everything I needed to be hooked. Then, like many of us, we began reading windsurfing magazines and in reading those pages, it created this fantasy and we wanted to sail in the conditions they were sailing in Hookipa or Backyards.

It was then that true frustration came into the sport for me. Living in Buenos Aires, Argentina all I had was a lake or a river. I concluded that I was wasting my time because I would never experience the extent of the fantasy that was fueled in me. Eventually, I went back to water skiing, which was more fitting for the lake that I lived on.
When I finished school I felt as though I needed to see what else was out there. So I decided to go out and travel for a while.

When I got to Puerto Rico and saw that the conditions were perfect for windsurfing, I decided I had to do something for myself and get back to my windsurfing days. I had the chance to begin a very little operation for windsurfing rentals and lessons. Armed with three boards and two rigs that somebody bought for me at that time I took to the job of building my ‘Windsurfing Dream Life’. A couple years later I was living it, windsurfing every day in this beautiful ocean, warm trade winds, and making a living out of it. The rental/school grew to quite a good size, but it was very difficult to get the people here because the hotels wouldn’t give them any deals, no one wanted windsurfing here, basically they didn’t care.
That’s how I ended up opening my first shop. I eventually got more interested in the retail side of it. By then I had realized that I was to repeat my previous experience of frustration. There were a handful of sailors that were still active in the sport (30 maybe). They were left over from the first generation of PR windsurfers who saw its golden days back in the 80’s. But I could see these sailors were sentenced to fade and die to the continued extreme changes that were taking place with the evolution of windsurfing. An evolution toward ultra-small custom unsailable-out-of-hookipa waveboards.

But as the years went by, and the industry grew, we collectively learn from our mistakes; the sport is at a different place now. We now have equipment like the Kazoo, where anyone can learn in any condition. And we have wide boards where racers can race on practically any body of water. This Formula Class windsurfing is wonderful! It broadens the range of windsurfing conditions. Whether it is a lake, ocean, 5 knots or 20 knots, windsurfing can happen in an exciting form. Now, for the first time, I can see a great opportunity to resuscitate windsurfing in Puerto Rico.

But what I believe is more important than all this, is the windsurfing culture. This is what we are focusing on in Puerto Rico. The cultures of friendship, of sharing, even a family thing. That’s the future of windsurfing. Anyone that has windsurfed, is a windsurfer and eventually will come back. We have many people who have sailed before and are now getting back into the sport. The industry has learned that windsurfing is about having fun. We’re seeing a new beginning. We see 50 people sailing where it used to be 10. All I see is a bright future from where we are right now. It will just happen at this point, and we don’t have to push it. The energy is there. It’s not about attitude, or the best gear. It’s about fun.

We have many women that come to the store and want to learn to windsurf. (When women say what they want, don’t get in their way.) Some of these women are now instructing other women to windsurf. You can see the energy or something that’s telling them that they can teach others. It’s like “If I can do it anyone can do it!” and that’s a big deal for the industry.

We have realized that the sport is for everybody. And that realization is coming to the beach. The sails, the boards and the components have all changed in a big way. It has made windsurfing much easier and more accessible. We’re talking about 10 times easier then it used to be. The sport is even more affordable with the Playboards Kazoo. The wind is free, no green fees or lift tickets. I think where we’re going-it’s unstoppable. We are setting the foundations to the windsurfing culture. And the windsurfing culture will be big because it is about nature. It is about a feeling of freedom. Every windsurfer knows, it is you and the elements, the harmony we are able to create through our body, and mind, to bring a sense of balance. It is about working with nature for our pleasure.