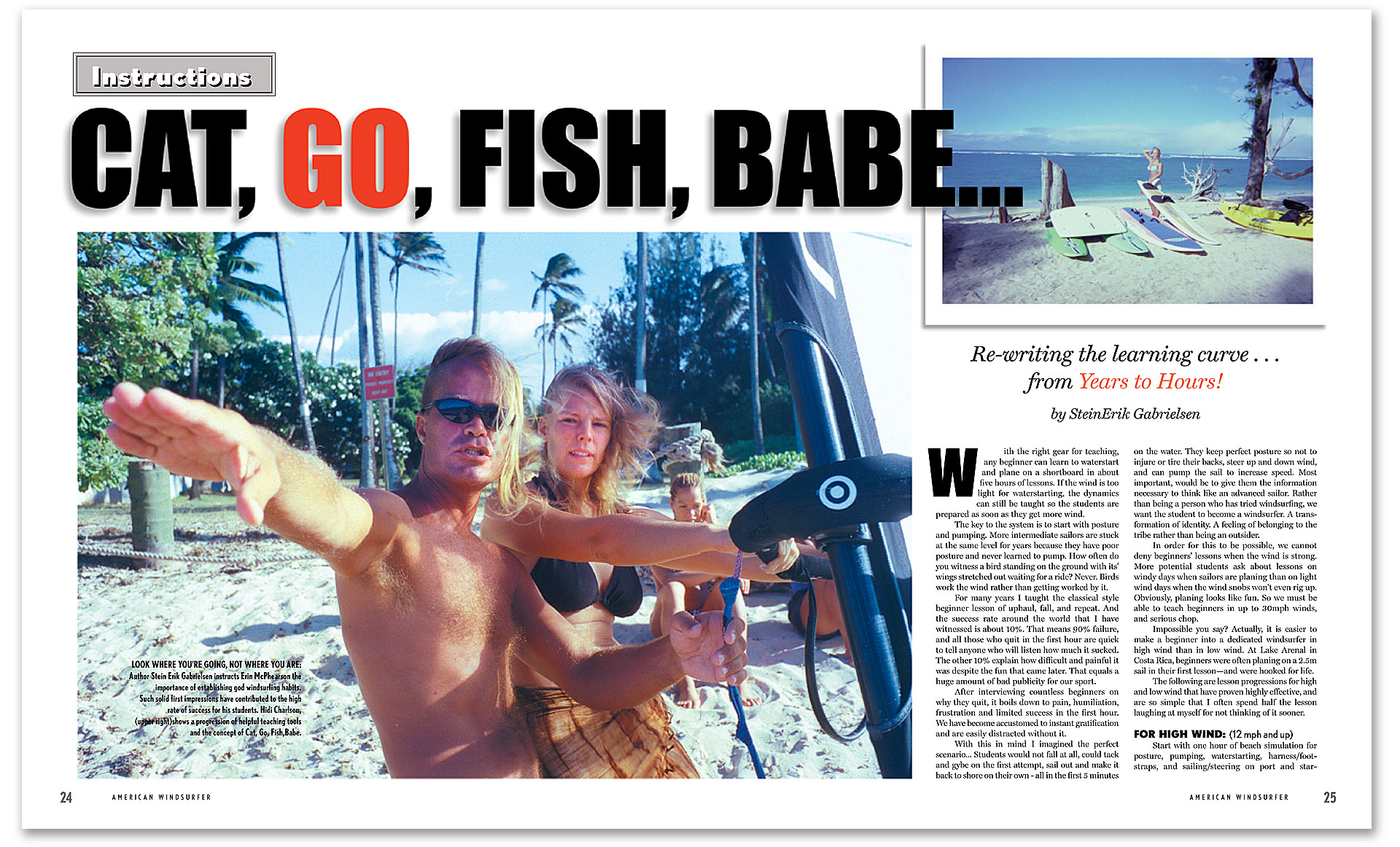 Re-writing the learning curve . . . from Years to Hours!

LOOK WHERE YOU’RE GOING, NOT WHERE YOU ARE: Author Stein Erik Gabrielsen instructs Erin McPhearson the importance of establishing god windsurfing habits. Such solid first impressions have contributed to the high rate of success for his students. Hidi Charlson, (upper right)shows a progression of helpful teaching tools and the concept of Cat, Go, Fish, Babe.

WITH THE RIGHT GEAR for teaching, any beginner can learn to waterstart and plane on a shortboard in about five hours of lessons. If the wind is too light for waterstarting, the dynamics can still be taught so the students are prepared as soon as they get more wind.

The key to the system is to start with posture and pumping. More intermediate sailors are stuck at the same level for years because they have poor posture and never learned to pump. How often do you witness a bird standing on the ground with its’ wings stretched out waiting for a ride? Never. Birds work the wind rather than getting worked by it.

The key to the system is to start with posture and pumping. More intermediate sailors are stuck at the same level for years because they have poor posture and never learned to pump. How often do you witness a bird standing on the ground with its’ wings stretched out waiting for a ride? Never. Birds work the wind rather than getting worked by it.

For many years I taught the classical style beginner lesson of uphaul, fall, and repeat. And the success rate around the world that I have witnessed is about 10%. That means 90% failure, and all those who quit in the first hour are quick to tell anyone who will listen how much it sucked. The other 10% explain how difficult and painful it was despite the fun that came later. That equals a huge amount of bad publicity for our sport.

After interviewing countless beginners on why they quit, it boils down to pain, humiliation, frustration and limited success in the first hour. We have become accustomed to instant gratification and are easily distracted without it.

With this in mind I imagined the perfect scenario… Students would not fall at all, could tack and gybe on the first attempt, sail out and make it back to shore on their own – all in the first 5 minutes on the water. They keep perfect posture so not to injure or tire their backs, steer up and down wind, and can pump the sail to increase speed. Most important, would be to give them the information necessary to think like an advanced sailor. Rather than being a person who has tried windsurfing, we want the student to become a windsurfer. A transformation of identity. A feeling of belonging to the tribe rather than being an outsider.

ACCELERATED LEARNING SYSTEM: Waterstart simulation on the beach (upper left) is the key to the system and establishes proper posture for a smooth progression.  The Catboard (middle left and right) provides a platform to concentrate on sail handling without the fear of falling. Waterstarting on the Go board is the next step in the progression.  This accelerated system takes years off the learning curve. Most important, (top photo) read American Windsurfer Magazine religiously.

In order for this to be possible, we cannot deny beginners’ lessons when the wind is strong. More potential students ask about lessons on windy days when sailors are planing than on light wind days when the wind snobs won’t even rig up. Obviously, planing looks like fun. So we must be able to teach beginners in up to 30mph winds, and serious chop.
Impossible you say? Actually, it is easier to make a beginner into a dedicated windsurfer in high wind than in low wind. At Lake Arenal in Costa Rica, beginners were often planing on a 2.5m sail in their first lesson—and were hooked for life.

The following are lesson progressions for high and low wind that have proven highly effective, and are so simple that I often spend half the lesson laughing at myself for not thinking of it sooner.

For high wind: (12 mph and up)
Start with one hour of beach simulation for posture, pumping, waterstarting, harness/footstraps, and sailing/steering on port and starboard—all with a full size sail. Uphauling is the last “skill” addressed right before entering the water. Uphauling is described as a temporary device used only in the learning process or for very light winds. Why? Because uphauling teaches your “muscle memory” poor posture. If it is the first thing a student tries, they will be fighting to get their hips forward for the rest of their lives. But if they experience a waterstart simulation and a powered up stance first, they naturally will
execute proper posture and progress at an amazing rate.

Next is one hour of practice on the water with a Catboard—a platform which bolts into the mast track and footstrap inserts of any two shortboards. By separating balance from sail handling, the student gets non-stop sailing experience without balance screwing up their posture. And one hour of continuous sailing is better than 20 hours of “uphaul and fall” because there is no shaken self-confidence or mistrusting the instructor, no wasted energy climbing back on the board and uphauling again, no frustration, swearing or any of the usual negative aspects of learning. Once the students can point upwind and hold a strait line they are ready to waterstart the GO board.

Most students get their first attempt at a deep waterstart with the instructor assisting by flying the sail and talking them through the moves that were practiced on shore. They pop up and usually plane for about 20-30 yards before letting go. The important things are that they have experienced the waterstart and planing, to see that with practice they will be able to recreate these maneuvers, and realize that the sensation is addicting. With more practice they will execute about a dozen more waterstarts/ planes left and right. Happy and exhausted, it is time to rest and fill the students with as much information as they can absorb.
The next time on the water it is to waterstart a sinker. This is to find the center of balance on the board. As soon as they can perform waterstarts on a sinker then it is back to the GO board which now seems easy. Now it’s time for quality mileage working on waterstarting, planing, sailing upwind, and getting less help from the instructor.

Once the students are independent of the instructor they switch to an easy freeride like a Starfish or RRD Twin Tip and practice on their own for about 10 hours before the next lesson. This next lesson refreshes their memory of harness and footstraps usage. After about 5 hours practicing it is time for the gybe lesson, and the basics of jumping. After only about 25 total hours, the beginner has become an advanced sailor.

For LIGHT wind: (1 to 11 mph)
If the wind is light, the beginning phase is the same, but in the third hour the focus is on aggressive pumping (still on the catboard) until pumping is instinctive—reacting without having to think about it. Then these skills are transferred to the GO board with a full-size sail and we try to pump onto plane, or at least to increase the speed while maintaining directional stability. Once this is accomplished, the pumping is practiced on longboards, and then on wide early planing shortboards. Within a few hours, the students are sailing on their own, prepared for waterstarting and planing when the conditions allow, and are pro-active rather than re-active. And by understanding how advanced sailing dynamics function, they are windsurfers rather than people who have tried windsurfing.
Obviously, results vary with the students. Julius Brighton spent 15 minutes practicing land simulation one evening, the next day he successfully waterstarted and planed left and right consistently from the first attempt. Don’t expect to succeed in 16 minutes. In the 3 years I’ve used this system he is the fastest learner ever. This is partly due to the fact that he has filmed windsurfing for the PWA for 3 years before trying it himself, so he studied the movements for a long time. Nathalie, Heidi and Erin all got their first waterstarts in one hour, and were independent after a few more hours. The average time can be about 3 – 5 hours now. Back in 1982, I struggled 2 years before my first waterstart.

SteinErik Gabrielsen will be on the road this summer with the American Windsurfer Clinic Tour. Starting in May, the tour will visit shops, schools, camps and events demonstrating this instructional philosophy. Bring your non-sailing spouse or friends and help us create more windsurfers.