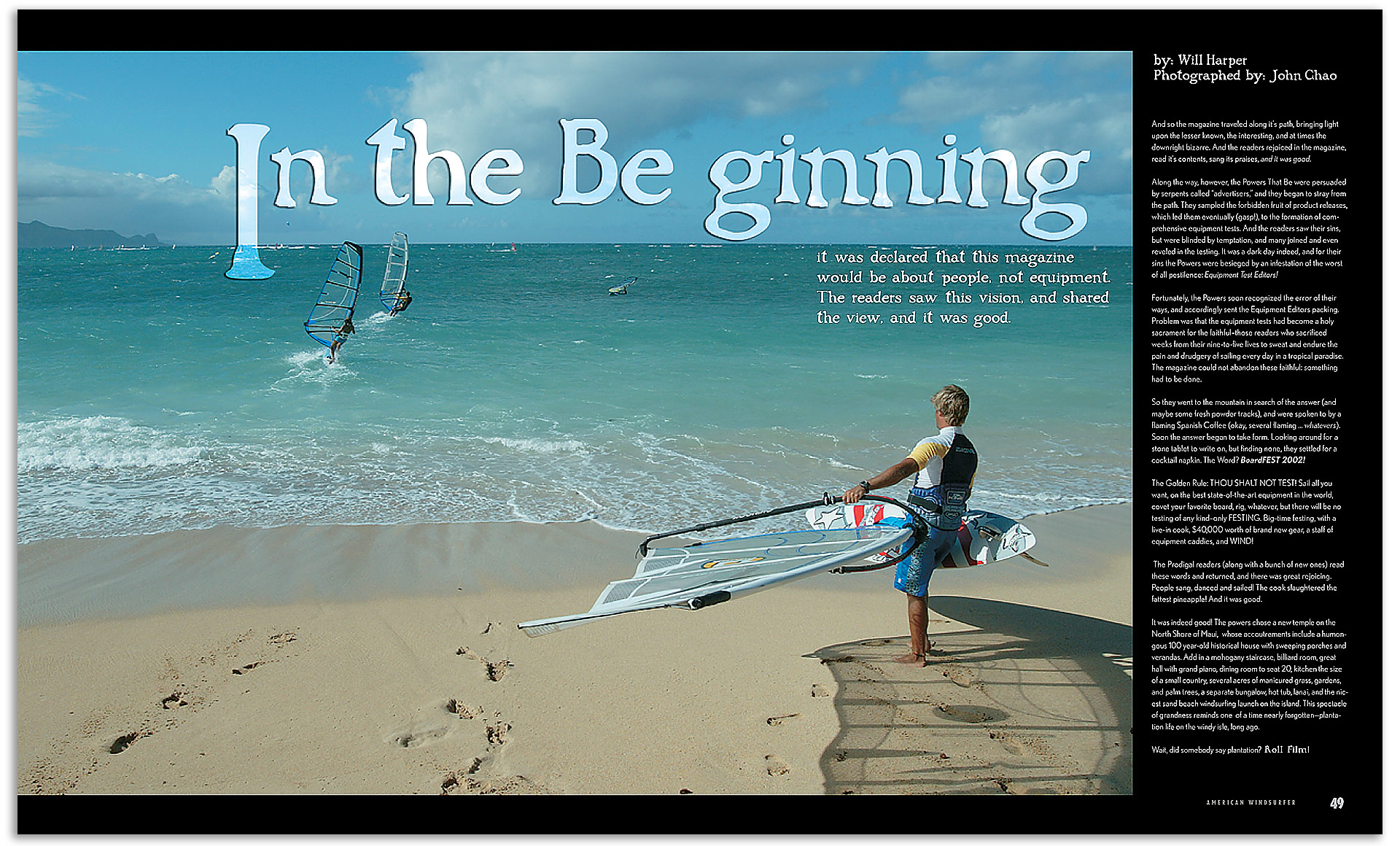 IN THE BEGINNING it was declared that this magazine would be about people, not equipment. The readers saw this vision, and shared the view, and it was good.

AND SO the magazine traveled along it’s path, bringing light upon the lesser known, the interesting, and at times the downright bizarre. And the readers rejoiced in the magazine, read it’s contents, sang its praises, and it was good.

And so the magazine traveled along it’s path, bringing light upon the lesser known, the interesting, and at times the downright bizarre. And the readers rejoiced in the magazine, read it’s contents, sang its praises, and it was good.

Along the way, however, the Powers That Be were persuaded by serpents called “advertisers,” and they began to stray from the path. They sampled the forbidden fruit of product releases, which led them eventually (gasp!), to the formation of comprehensive equipment tests. And the readers saw their sins, but were blinded by temptation, and many joined and even reveled in the testing. It was a dark day indeed, and for their sins the Powers were besieged by an infestation of the worst of all pestilence: Equipment Test Editors!

Fortunately, the Powers soon recognized the error of their ways, and accordingly sent the Equipment Editors packing. Problem was that the equipment tests had become a holy sacrament for the faithful–those readers who sacrificed weeks from their nine-to-five lives to sweat and endure the pain and drudgery of sailing every day in a tropical paradise. The magazine could not abandon these faithful: something had to be done.

In the beginning, there was wind, and the wind said . . . let there be Windsurfers

So they went to the mountain in search of the answer (and maybe some fresh powder tracks), and were spoken to by a flaming Spanish Coffee (okay, several flaming … whatevers). Soon the answer began to take form. Looking around for a stone tablet to write on, but finding none, they settled for a cocktail napkin. The Word? BoardFEST 2002!

The Golden Rule: Thou Shalt Not Test! Sail all you want, on the best state-of-the-art equipment in the world, covet your favorite board, rig, whatever, but there will be no testing of any kind–only FESTING. Big-time festing, with a live-in cook, $40,000 worth of brand new gear, a staff of equipment caddies, and WIND!

The Prodigal readers (along with a bunch of new ones) read these words and returned, and there was great rejoicing. People sang, danced and sailed! The cook slaughtered the fattest pineapple! And it was good.
It was indeed good! A base on the North Shore of Maui, It was It was indeed good! The powers chose a new temple on the North Shore of Maui, whose accoutrements include a humongous 100-year-old historical house with sweeping porches and verandas. Add in a mohogany staircase, billiard room, great hall with grand piano, dining room to seat 20, kitchen the size of a small country, several acres of manicured grass, gardens, and palm trees, a separate bungalow, hot tub, lanai, and the nicest sand beach windsurfing launch on the island. This spectacle of grandness reminds one of a time nearly forgotten—plantation life on the windy isle, long ago.

SCARLET: “Honestly Rhett, it is soo wonderful here on Maui! They’ve made the doors extra-wide so the ladies’ hoop-skirts fit through easily! And the servants’ quarters! Why they’re such nice little bungalows!”

RHETT: “Scarlet, I don’t know why you bother with those hoopy-things! Take that silly dress off and meet me in the hot tub! I gave the servants the day off to go surfing at Thousand Peaks!”
SCARLET: “But Rhett! What would they say back at Tara?”
RHETT: “Frankly my dear, I don’t give a damn! It’s rippin’ out there and I’m going windsurfing! Now get your bikini on and rig a 4.0!”
SCARLET: “Oh Rhett, you devil…” CUT!

In the beginning, there was wind, and the wind said . . . let there be Windsurfers and they were good…

Well, now you know how it all came about, and a little about the place we chose. But, as a responsible journalist, I of course, have a duty of due diligence to let all of you who weren’t there know exactly what you missed. Which, according to just about everybody who was there, was pretty much the best windsurfing vacation anybody had ever been on.

Words really cannot express the true luxury we subjected our guests to. Morning ‘til night, we kept the stoke alive. From the dangerous amounts of killer food that the house staff kept flowing from the kitchen to the spanking new gear provided by Challenger, Drops, Got, Gulftech, and WindWing, to the on-call masseuse, to beers in the hot tub and a game of 8-ball at the end of the day. We danced at Casanova’s, partied at Jaques, chowed down at the Fish Market-–all the things you’re supposed to do when in Maui. Anybody who wanted them got kiteboarding lessons every morning, and we got visitors too. Pro windsurfers would drop by to sail and hang out. Beautiful beach wanderers, some of whom eventually became welcome fixtures on the compound grounds (thank you Joanna, Dianne, Laurel, Amber, Lucette, Jace… Jace? Who invited that guy?) added to the already amazing scenery. And yeah, don’t tell the landlord, but despite the words in the lease strictly to the contrary, we had a party or two (or more, but we’re not talking).

I think the best part of the whole trip, and I speak for the entire AW staff here, were the guests. People we might, if not for windsurfing, have ever had a conversation with, became a part of our lives, and we a part of theirs. They lived with us, sailed with us, and became our friends. Each with their own personalities, Oli Oli Kai became a melting pot of character, each adding his or her own spice and flavor to the simmering sauce (no, we’re not talking about the hot tub, it’s a metaphor–yuk). And on the sad and final day, when we packed up the gear, exchanged emails, and emptied the house of all evidence of our having been there, all minds were on one thing: Next year!

Hopefully, we’ll see you all there! And if you don’t go, you’re going to have to read another one of these reports on all the fun you missed — again!

10/3/02. Arrived Thursday night. John picked me up at the airport, got to the place at dark. Bob walked down to the beach with me, so I started my vacation with a swim before hitting the mattress. Luckily, the sharks weren’t feeding that night!

Friday: Woke up jet-lagged. Walked out to the beach as the sun came up. I was seeing Maui for the first time! Ocean, mountains, waves, palm trees, it was breathtaking. I was overwhelmed – far from New England.
•After breakfast had my first kite lesson. Bob has had a lot of experience teaching.
•• 11 a.m. sailed a 7.0, many 3’ ramps before the reef for jumping. Didn’t make it through the reef the first couple of times. 2 p.m. went to Red Bull Kite Contest. Awesome seeing Robby Naish, etc. Then went back and sailed until 5.

Saturday woke up 6 a.m., ran to Sprecklesville and back, the wind already 6.0 or better. Kite lesson, then 11 a.m. out on a 4.5 and 80-liter Drops. Took most of the day to master, but by 3 p.m. was loving the WindWing sails and Drops boards, riding waves and some jumps before the reef.
• Finished at 5:15 p.m., with a big jump on the reef, then jibing on the outside and riding a couple on the way in. When I hit the beach I looked back out to the ocean and said to myself, “I’ve met my goal in life, I won, my life’s complete.” I had tears in my eyes.
•• Dinner that night in Paia, then off to the beach party for the Red Bull contest. 200 people, free drinks flowing all night, kite videos on a 50” TV, mechanical bull riding, and music!

Sunday, another great breakfast. Boy, are they treating us good! More guests arrive: James and John are from Boston. They sail Forest Beach and know a lot of sailors there. James has been here three times before and for John this is only his third year of sailing, but he’s an Iron Man Triathlete, that says it all. Kite lesson, then 11 a.m. 4.5 again. Making my jibe on the outside where the faces of waves reach 10ft and break on the reef at about 6 ft. Saw a guy out on the water waving to us with no rig, Badger (Bob Riviello, AW Staff) sailed out to rescue him, then an hour later a lifeguard on a waverunner flagged me down outside the reef looking for him. They had found his rig at Kanaha. He didn’t go down to get it so they thought he was still out there.
• Sunday evening more pool, then out to Paia for Wahoo burgers.

LAND SHARKS were the only fearsome animals spotted during the trip, so we invited them in. Any great 6-week festival deserves a 6-hour sendoff, so that’s just what we gave ourselves. We partied into the wee hours, knowing that the morning would bring the dreaded move-out day. All the more reason to celebrate a little longer, stay up a little later, and plan our return a little sooner.

Monday, 6 a.m. walk on the beach, nobody around! French toast, fruit, etc, then another kite lesson, and a quick duck-jibe lesson, 11 a.m. out on a 5.0 WindWing and 88-liter Drops. Big crash in a gust, banged my leg up, hurts. Got a cut and bruises, small toe may be broken, but I’m doing fine after lunch. Marlin at the Plantation for dinner. It’s great that so many sailors hang out here. I had 3 Red Hook IPAs and 2 regular beers, took 2 aspirin before bed and felt fine in the morning.

Tuesday morning; Omelet then a short kite lesson. 11:30 a.m. 5.0. Old man must be tired today (couldn’t be the beers last night, eh Peter?). After a couple of games of pool went out to one of the best restaurants on Maui (Halemale General Store). Fish dinner with one beer cost me $46!

Wednesday morning, another omelet. 11:45 a.m. sailing again (a little later each day?), 5.5m. Practicing my duck-jibes. Got stung by a jellyfish. Not New England Jellyfish, this really hurt! Luckily the hot tub took care of it. Marlin-fish tacos tonight–this couldn’t get any better! Shot pool ‘till 9, then went bar-hopping with the boys and of course Jenny (AW staff house manager).

Thursday. My body will be ready to come home, but no blisters yet. Cruising today on a 7.2, BLTs for lunch. Long happy hours of pool after sailing, going out for sushi tonight.

Friday. Blueberry pancakes! Different wind from a different direction today (Kona), so we loaded up and headed over to the South shore. I took a 5.2, so I could get out to the wind line which was just about at the reef. I was way over-powered, but loving it.
Badger’s wife (Dana) arrived today, with their son. He was just like my grandchildren. I had fun with him. 5 p.m., two more guys arrive from North Carolina. Got the scoop on Wilmington beaches.

Saturday. Last Day! Went shopping with John in the a.m., then out on a 5.5 ‘til 1 p.m. After lunch went from a 5.0 to a 4.5 to a 4.1! This was an epic day! The ramps were big and straight-on, I’ll never jump higher than that day. Lots of people looping, wish I had the guts too. When you jump on the reef at low tide, it’s only 2-3 feet in places. Never hit my fin, though, great boards: they always land soft. Still haven’t made a duck-jibe, but I’ll get one now.
• Jenny made my favorite again–fish and beef tacos for lunch!
•• 8:30 p.m., said my good-byes and Will took me to the airport.
••• Hope I can get back there again….