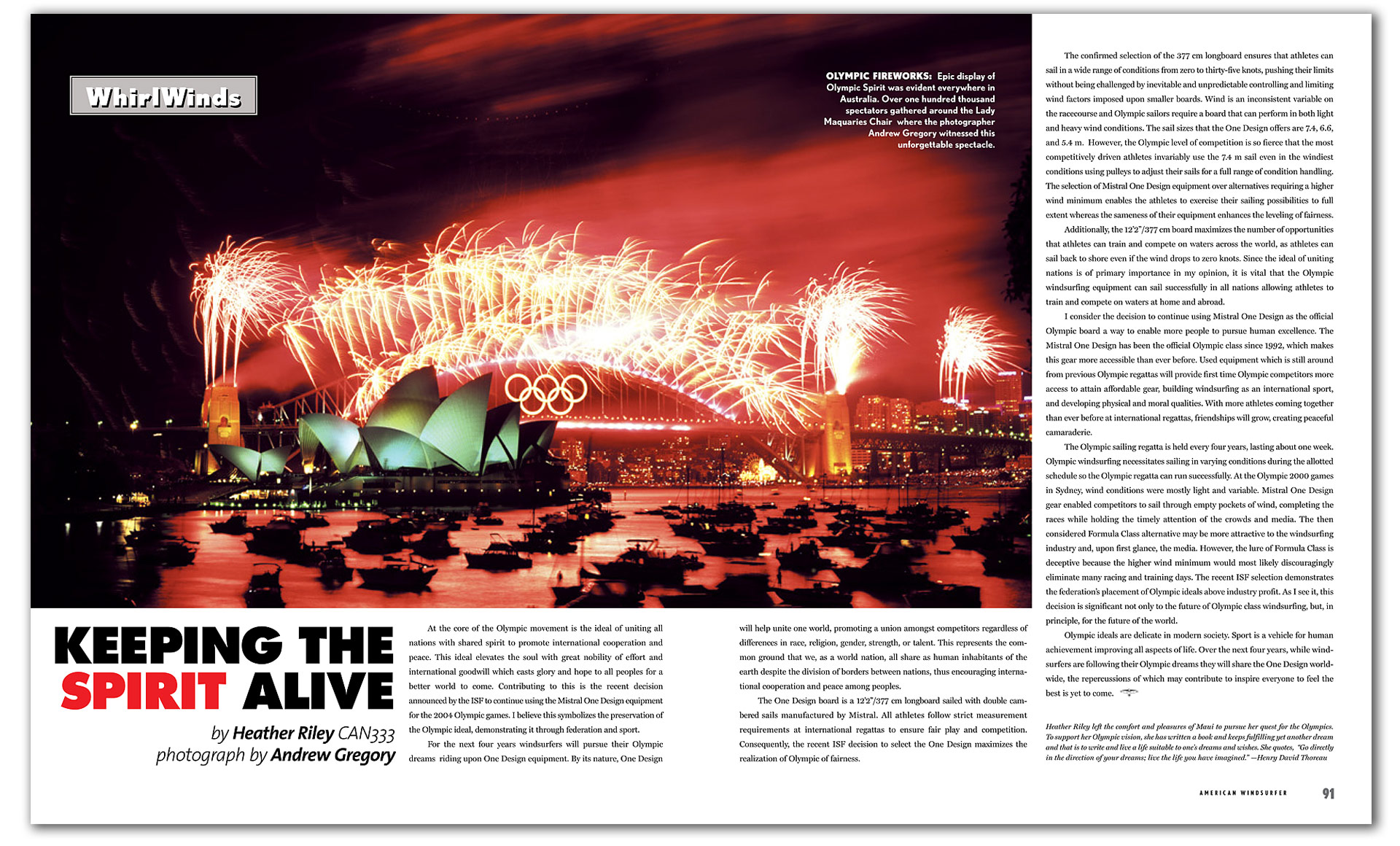 For the next four years windsurfers will pursue their Olympic dreams riding upon One Design equipment.

OLYMPIC FIREWORKS:  Epic display of Olympic Spirit was evident everywhere in Australia. Over one hundred thousand spectators gathered around the Lady Maquaries Chair  where the photographer Andrew Gregory witnessed this unforgettable spectacle.

AT THE CORE of the Olympic movement is the ideal of uniting all nations with shared spirit to promote international cooperation and peace. This ideal elevates the soul with great nobility of effort and international goodwill which casts glory and hope to all peoples for a better world to come. Contributing to this is the recent decision announced by the ISF to continue using the Mistral One Design equipment for the 2004 Olympic games. I believe this symbolizes the preservation of the Olympic ideal, demonstrating it through federation and sport.

For the next four years windsurfers will pursue their Olympic dreams  riding upon One Design equipment. By its nature, One Design will help unite one world, promoting a union amongst competitors regardless of differences in race, religion, gender, strength, or talent. This represents the common ground that we, as a world nation, all share as human inhabitants of the earth despite the division of borders between nations, thus encouraging international cooperation and peace among peoples.

The One Design board is a 12’2’’/377 cm longboard sailed with double cambered sails manufactured by Mistral. All athletes follow strict measurement requirements at international regattas to ensure fair play and competition. Consequently, the recent ISF decision to select the One Design maximizes the realization of Olympic of fairness.

The confirmed selection of the 377 cm longboard ensures that athletes can sail in a wide range of conditions from zero to thirty-five knots, pushing their limits without being challenged by inevitable and unpredictable controlling and limiting wind factors imposed upon smaller boards. Wind is an inconsistent variable on the racecourse and Olympic sailors require a board that can perform in both light and heavy wind conditions. The sail sizes that the One Design offers are 7.4, 6.6, and 5.4 m.  However, the Olympic level of competition is so fierce that the most competitively driven athletes invariably use the 7.4 m sail even in the windiest conditions using pulleys to adjust their sails for a full range of condition handling. The selection of Mistral One Design equipment over alternatives requiring a higher wind minimum enables the athletes to exercise their sailing possibilities to full extent whereas the sameness of their equipment enhances the leveling of fairness.

Additionally, the 12’2’’/377 cm board maximizes the number of opportunities that athletes can train and compete on waters across the world, as athletes can sail back to shore even if the wind drops to zero knots. Since the ideal of uniting nations is of primary importance in my opinion, it is vital that the Olympic windsurfing equipment can sail successfully in all nations allowing athletes to train and compete on waters at home and abroad.

I consider the decision to continue using Mistral One Design as the official Olympic board a way to enable more people to pursue human excellence. The Mistral One Design has been the official Olympic class since 1992, which makes this gear more accessible than ever before. Used equipment which is still around from previous Olympic regattas will provide first time Olympic competitors more access to attain affordable gear, building windsurfing as an international sport, and developing physical and moral qualities. With more athletes coming together than ever before at international regattas, friendships will grow, creating peaceful camaraderie.

Heather Riley left the comfort and pleasures of Maui to pursue her quest for the Olympics. To support her Olympic vision, she has written a book and keeps fulfilling yet another dream and that is to write and live a life suitable to one’s dreams and wishes. She quotes,  “Go directly in the direction of your dreams; live the life you have imagined.” —Henry David Thoreau

The Olympic sailing regatta is held every four years, lasting about one week. Olympic windsurfing necessitates sailing in varying conditions during the allotted schedule so the Olympic regatta can run successfully. At the Olympic 2000 games in Sydney, wind conditions were mostly light and variable. Mistral One Design gear enabled competitors to sail through empty pockets of wind, completing the races while holding the timely attention of the crowds and media. The then considered Formula Class alternative may be more attractive to the windsurfing industry and, upon first glance, the media. However, the lure of Formula Class is deceptive because the higher wind minimum would most likely discouragingly eliminate many racing and training days. The recent ISF selection demonstrates the federation’s placement of Olympic ideals above industry profit. As I see it, this decision is significant not only to the future of Olympic class windsurfing, but, in principle, for the future of the world.

Olympic ideals are delicate in modern society. Sport is a vehicle for human achievement improving all aspects of life. Over the next four years, while windsurfers are following their Olympic dreams they will share the One Design worldwide, the repercussions of which may contribute to inspire everyone to feel the best is yet to come.