If there’s to be a future for windsurfing, the industry has to find a way to reach the mass market. 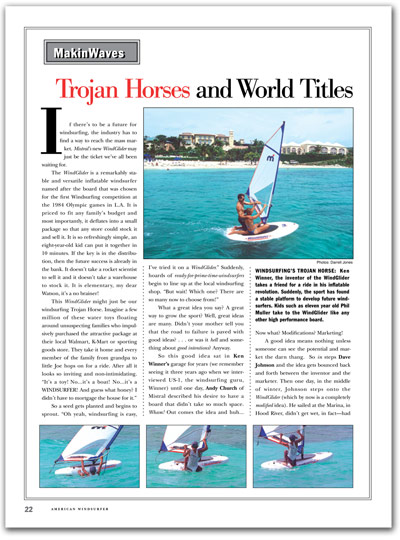 WINDSURFING’S TROJAN HORSE: Ken Winner, the inventor of the WindGlider takes a friend for a ride in his inflatable revolution. Suddenly, the sport has found a stable platform to develop future windsurfers. Kids such as eleven year old Phil Muller take to the WindGlider like any other high performance board.

IF THERE’S TO BE A FUTURE for windsurfing, the industry has to find a way to reach the mass market. Mistral’s new WindGlider may just be the ticket we’ve all been waiting for.

The WindGlider is a remarkably stable and versatile inflatable windsurfer named after the board that was chosen for the first Windsurfing competition at the 1984 Olympic games in L.A. It is priced to fit any family’s budget and most importantly, it deflates into a small package so that any store could stock it and sell it. It is so refreshingly simple, an eight-year-old kid can put it together in 10 minutes. If the key is in the distribution, then the future success is already in the bank. It doesn’t take a rocket scientist to sell it and it doesn’t take a warehouse to stock it. It is elementary, my dear Watson, it’s a no brainer!

This WindGlider might just be our windsurfing Trojan Horse. Imagine a few million of these water toys floating around unsuspecting families who impulsively purchased the attractive package at their local Walmart, K-Mart or sporting goods store. They take it home and every member of the family from grandpa to little Joe hops on for a ride. After all it looks so inviting and non-intimidating. “It’s a toy! No…it’s a boat! No…it’s a WINDSURFER! And guess what honey? I didn’t have to mortgage the house for it.”

So a seed gets planted and begins to sprout. “Oh yeah, windsurfing is easy, I’ve tried it on a WindGlider.” Suddenly, hoards of ready-for-prime-time-windsurfers begin to line up at the local windsurfing shop. “But wait! Which one? There are so many now to choose from!”

So this good idea sat in Ken Winner’s garage for years (we remember seeing it three years ago when we interviewed US-1, the windsurfing guru, Winner) until one day, Andy Church of Mistral described his desire to have a board that didn’t take so much space. Wham! Out comes the idea and huh… Now what? Modifications? Marketing!

A good idea means nothing unless someone can see the potential and market the darn thang.  So in steps Dave Johnson and the idea gets bounced back and forth between the inventor and the marketer. Then one day, in the middle of winter, Johnson steps onto the WindGlider (which by now is a completely modified idea). He sailed at the Marina, in Hood River, didn’t get wet, in fact—had fun. Boom! The hammer comes down. Bam! Lightening strikes and Eureka! “I might get rich after all!” says the chief of North Sports USA, to himself.

So Johnson takes the new idea and flies to Europe on a Top Secret Mission. (Sunglasses, raincoat, fake beard and all) He sells the idea to the Mother company. The reception was enthusiastic and “M” agrees to pump air, a.k.a money, to promote the inflatable internationally.

Johnson comes back and gets totally consumed by the idea. He spends days, nights, weeks and months packaging the product with photos, videos, brochures, ads, infomercial and trade shows to promote the idea. As of the closing of this issue, his effort is paying off. At a recent watersports show, over 80 new dealers outside the industry signed up to carry the Trojan Horse…uh, I mean, WindGlider.

Good ideas are many but giving birth takes time and effort; however, death can come quickly and unexpectedly. Such was the case for Mark Fraas. An avid recreationalist whose passion for mountain climbing equalled his love for windsurfing, died on Saturday, September 8th, in a climbing accident on Mount Hood. The 40-year-old fell an estimated 1,500 feet while attempting to scale the Cooper Spur route on the northeast slope of the peak. He was pronounced dead at the scene by mountain rescuers and the Air Force Reserve’s 304 Rescue Squadron out of Portland. The loss was felt by many whose lives have been touch by Fraas’ euphoric magic. He was loved by many and liked by all. His death was witnessed by Rodney Brenneman of San Juan Capistrano, CA, whom he had only met two days prior at Airtime, his sports apparel store. Brenneman’s account on the next columns pays tribute to a man who was at peace with himself and the world he left behind.

Escape from the JAWS of death seems to be the cutting edge of a new book packaged by American Windsurfer’s ardent photographic contributor, Patrick McFeeley. McFeeley’s new book entitled JAWS MAUI captures the exploits of big wave surfers and windsurfers in a place called JAWS on the North Shore of Maui. We are pleased to report  McFeeley claims that he was inspired to do the book after seeing how the magazine displayed his extraordinary photographs in issue 4.2.

Coincidentally, Bjorn Dunkerbeck  graced the cover of the same issue and having met Dunkerbeck through a dinner party hosted by the magazine on Maui, McFeeley approached Dunkerbeck to see if he would be interested in supporting a book project. Dunkerbeck instantly realized what he was looking at and said, “This is history and I will help you make it happen.” Even though at that time, there was not a single photo of the World Champion sailing at  JAWS.

McFeeley immediately recruited writers Charlie Lyon along with publisher and distribution expert Peter Cannon to join the McFeeley/Dunkerbeck team.  He also recruited Strapped Inc. the gang of watermen who put JAWS on the map and credited as the inventors of strap surfing  and tow-surfing. “I photographed them for six years and I watched the surfing world laugh at them,” says McFeeley who volunteered to pay a percentage of the sales of the book to the team. “They made it happen and they deserved to have a part of the book.”

“They are conquering the last frontier that’s left on the planet and they’re the greatest group of people I have ever seen.” says McFeeley about the Strapped Team which includes Laird Hamilton, Dave Kalama, Mike Waltze, Darrick Doerner, Peter Cabrinha, Rush Randle, Brett Lickle, Mark Angulo, and Dave Nash. Within a few months, McFeeley was in China printing the book which replicates the size and format of this publication.

The Chinese had no idea what was coming. Not only was the initial print order of an unprecedented 30,000 copies. The amount of ink used by the book made history in the annuls of book publishing. Two metric tons of ink had to be fed into the press to cover all the full bleed color photographs that splash on every page. What do you expect when you’re dealing with big waves! The surfing and windsurfing world has never seen anything like this and considering how many countries the book is entering, JAWS MAUI is guaranteed to generate some big waves.

Being a winner and picking the winning team seems to be Bjorn Dunker-beck’s karma. He has once again won the PWA World Title for the tenth year in a row. This time he already has it in his jaws with two events still left to go.

At 7:30 a.m. on Saturday, Sept. 6, Hood River lost a dear friend, a successful business owner and accomplished mountaineer.  I was climbing with Mark Fraas high on the Cooper Spur route of Mount Hood when he fell to his death.

I had only met Mark two days before while inquiring about conditions on Mount Hood at his shop, Airtime, in Hood River. He had been waiting to climb the Cooper Spur route and ski part of it, so we decided to go Friday night. Hiking by head lamp, we reached the foot of the snow apron which forms the Cooper Spur  route at 5:30 a.m.

We sat under a veil of stars and watched as the Eliot Glacier began to glow with the approaching sunrise. Mark pointed out Mount Adams to the north, and chutes he had climbed and skied a few weeks before. He reflected on skiing the Snow Dome just across the Eliot Glacier with a good friend. He watched as the morning sky turned to a breathless panorama of violet, blue, red and blazing orange as the sun rose and unveiled Mount Hood’s northeast face.

We climbed unroped with crampons and ice axes steadily up the ever steeper, ever narrowing slope. Mark had almost completed the final traverse across the face to just under the chimney.  I was 50 feet below and to his left, in the middle of the slope. I looked up as I heard a noise and saw Mark sliding and tumbling down the slope.  He said nothing and his face showed no fear, only calm concentration as he tumbled past me 20 feet to my right. I watched, numb, as he continued down the mountain and disappeared over the headwall of the Eliot Glacier in a wisp of snow.  The mountain had called home one of its children.

I had the pleasure to share the last six and half hours of Mark Fraas’s life with him, in the place he loved. Perhaps me, a stranger, so that he didn’t make that final journey alone and spare his closest companions some of the grief of his passing. Mark was at peace with the world and himself. I can’t imagine a more beautiful farewell.

My deepest condolences to his friends and family.  And, my gratitude to the rescue volunteers and the 304th Rescue Squadron for their help.