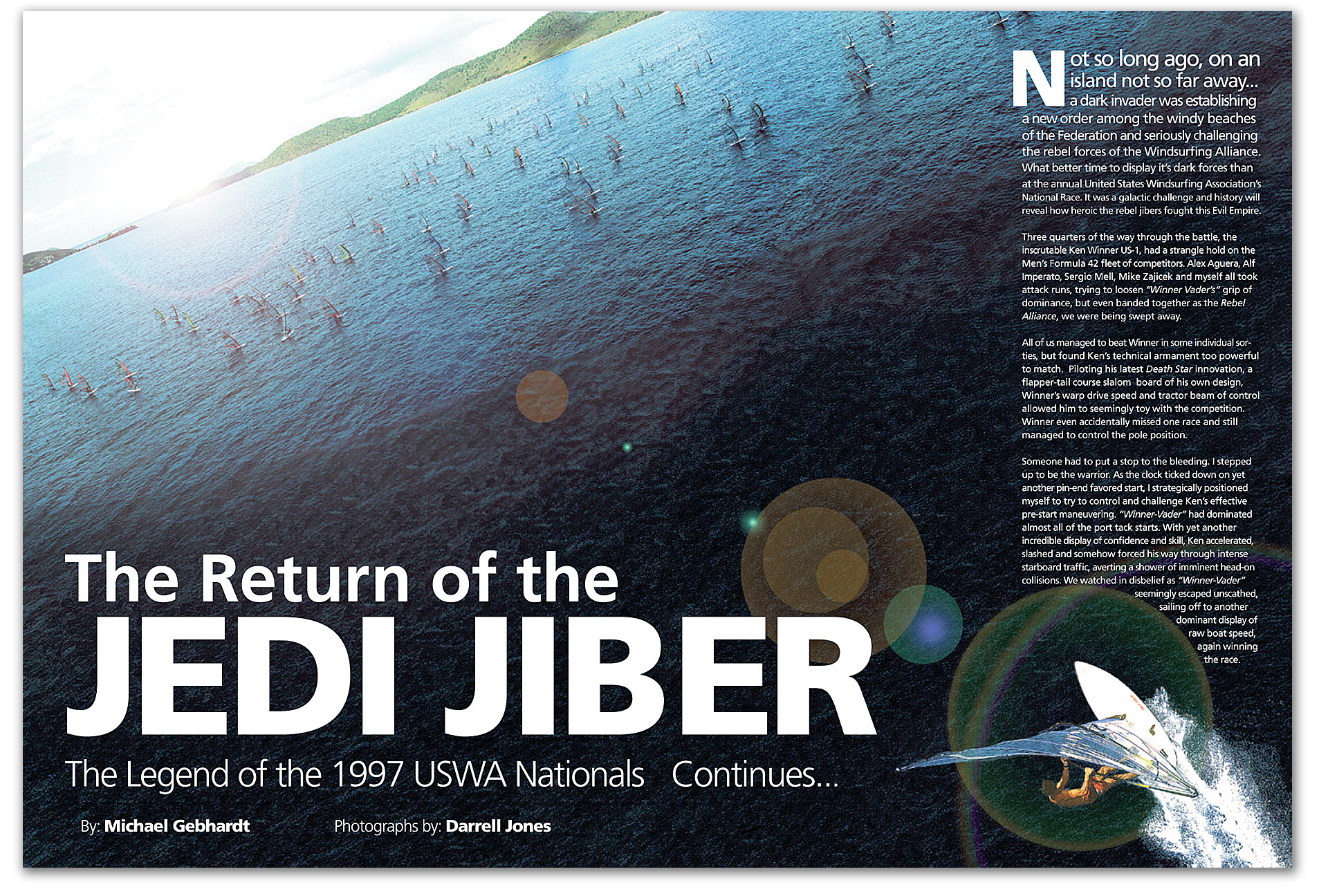 The Legend of the 1997 USWA Nationals Continues…

NOT SO LONG AGO, on an island not so far away…

A dark invader was establishing a new order among the windy beaches of the Federation and seriously challenging the rebel forces of the Windsurfing Alliance. What better time to display it’s dark forces than at the annual United States Windsurfing Association’s National Race. It was a galactic challenge and history will reveal how heroic the rebel jibers fought this Evil Empire.

Three quarters of the way through the battle, the inscrutable Ken Winner US-1, had a strangle hold on the Men’s Formula 42 fleet of competitors. Alex Aguera, Alf Imperato, Sergio Mell, Mike Zajicek and myself all took attack runs, trying to loosen ‘‘Winner Vader’s” grip of dominance, but even banded together as the Rebel Alliance, we were being swept away.

All of us managed to beat Winner in some individual sorties, but found Ken’s technical armament too powerful to match.  Piloting his latest Death Star innovation, a flapper-tail course slalom  board of his own design, Winner’s warp drive speed and tractor beam of control allowed him to seemingly toy with the competition. Winner even accidentally missed one race and still managed to control the pole position.

Someone had to put a stop to the bleeding. I stepped up to be the warrior. As the clock ticked down on yet another pin-end favored start, I strategically positioned myself to try to control and challenge Ken’s effective pre-start maneuvering. “Winner-Vader” had dominated almost all of the port tack starts. With yet another incredible display of confidence and skill, Ken accelerated, slashed and somehow forced his way through intense starboard traffic, averting a shower of imminent head-on collisions. We watched in disbelief as “Winner-Vader” seemingly escaped unscathed, sailing off to another dominant display of raw boat speed, again winning the race.

FUTURE JEDI JIBER watches Ken Winner US-1  a.k.a. Darth Winner Vader, completing his engagement with the rebel forces on the waters of Pillsbury Sound in St. Thomas, USVI.

The devastated Rebel Alliance found solace on the beach among their comrades in arms, but on the water, the dominance of Winner Vader’s Imperial Star Fleet Board out matched their rebel cause. ON THE STARTING LINE Jedi Jiber Alex Aguera (lower left) prepares to enter the starting line battle. Deflector shields are on full force avoiding the 100 plus Jibers.

BUT, in the midst of the intensely heated pre-start skirmish, Winner took a hit and lost a deflector shield. Was this to be a fatal error? Within the melee of the pre-start maneuvering, Vader had inadvertently forced me into oncoming traffic, fouling both Robby

Douglas and myself. Douglas was inexperience with the Star Fleet’s rules and regulations and he failed to hail protest at the appropriate time.  A  key opportunity to put a dent in Vader’s impenetrable superstructure was lost with this betrayal of the rebel forces.  In the midst of my Vader induced, high speed collision, I, however,did manage to protest “Winner Vader”, which set the stage for the battle to continue. The fight was fixed between the Rebel Alliance and the powerful Dark Side, with the protest room as the battlefield.

All hopes were on the protest committee. The future of the rebel forces lay in it’s hands. But, to the dismay of the Rebel Alliance, “Winner Vader” again escaped the futile trap laid by the rebel forces. The protest committee rendered a decision that allowed “Winner Vader” to live and  do battle once more. To Vader’s credit, Winner humbled the Rebel Alliance’s aggressive position, by stating his case without embellishment or lies. He did not need to enhance his chances of winning the protest. War, after all, is fought with honor.

Meanwhile,  back at dinner, while the rebel warriors discussed their seemingly hopeless situation, Robby Douglas, with younger brother Jamie, vowed to somehow bring honor back to the Rebel Alliance’s cause. The young Jamie, forever the protector of righteousness, promised to avow his brother’s honor. He would personally confront “Winner Vader”. He was going to let him know, in no uncertain terms, that The Dark Side was not going to get away with this treachery! The Evil Empire was going to have to deal with Jedi Jamie from now on!

EXPOSING THE DARK SIDE on the evening of the Star Fleet’s Awards Banquet.  Ken “Vader” Winner(far left) pose with Gyorgy Partos a Jedi Jiber from Hungary.

The training commenced, with the Rebel Alliance instructing Jamie in the ways of a Jedi Warrior. The all knowing and all wise rebels injected liquid courage into Jamie, pumping him into a frothing frenzy with chants of “You must confront Vader! You must confront Vader!” It was too much too soon! Before his training was complete, young Jamie stormed off into the parting crowd to confront the Dark Side. We tried to stop him… “Luke, Luke, your training is not complete…” but he would not take heed.

The alliance eagerly awaited  Luke’s glorious return, a victorious soldier of the Rebel Alliance.  But Instead, the young Jedi returned in sober defeat as he found that he was an inseparable part of the Dark Side. The chants of “Luke, Luke, don’t be swayed by the Dark Side!” were powerless against the sheer strength before him. Jamie recounted the battle scene. He approached Vader with aggression and righteousness. “You gotta lot of balls trying a maneuver like that…..er, uhh…..well, I’D JUST LIKE TO CONGRATULATE YOU ON A FINE PIECE OF SAILING!”

The Jedi Alliance moaned with disbelief! “Luke, you went to confront Vader and came back with an autograph??!!”

MAY THE MOUSE BE WITH YOU echoes down the beach and from the radio of chief Bill “Obewan Kenobe” Collins. Head Star Fighter Tinho Dornellas instructs the young rebels in the environmentally gentle ways

of the Jedi Jiber. This new wave of youthful enthusiasts joins to form a Disney battalion

to discover the ancient arts of the Empire. While the young rebels

revel in their tasks, an aspiring jiber talks to paparazzi forces of the Rebel Alliance

THIS IS NOT Hollywood. This is real life, baby! And so, the rebel alliance was ultimately slaughtered by “Winner Vader”.  And the saga will continue as Ken Winner controls the windsurfing universe until  next year in Maui at the 1998 U.S. Nationals when “Winner Vader”again meets the Rebel Alliance.

The good news is that the US Nationals launched a entire new wave of young aspiring rebel apprentices. The future of American windsurfing talent was witnessed in the form of 27 kids, with their own junior clinics expertly hosted by Tinho and Susie Dornellas. The highlight of the junior event was watching the grommets dueling it out against mother nature, on their supplied Mini Mistral/Disney kid’s rigs. Proud parents and admiring spectators alike cheered in awe, at the sheer determination of the newly inspired junior sailors. 40 pound rebels were observed getting maxed out on 1.2 meter sails, giving new meaning to the notion of being powered up!

Local resident and US Windsurfing President Bill Collins, a.k.a. ‘Obewan Kenobe’, ( OK now! Hear this. OK can you dig it…OK) brought “The Force” back into the windsurfing regatta’s formula. Under Bill’s guidance, the focus of the event was on good clean fun, with the priority on fusing a family vacation within a regatta. The formula worked and enticed over two dozen racing families to attend. Children and wives were consistently seen beating the pants off of humbled fathers. We won’t mention names to protect the innocent!

The Nationals were skillfully orchestrated by ‘Texas Bill’ ,a.k.a. “Barbeque” Collins,  after having taken a one year hiatus, with the previous’ year’s event being foiled by Hurricane Marilyn. Don’t mess with Texas Bill is the word on the island. After all, “Winner-Vader” wouldn’t have a chance had Obewan Kenobe been on the water instead of feeding the rebel forces.   OK? Dig it now! OK!