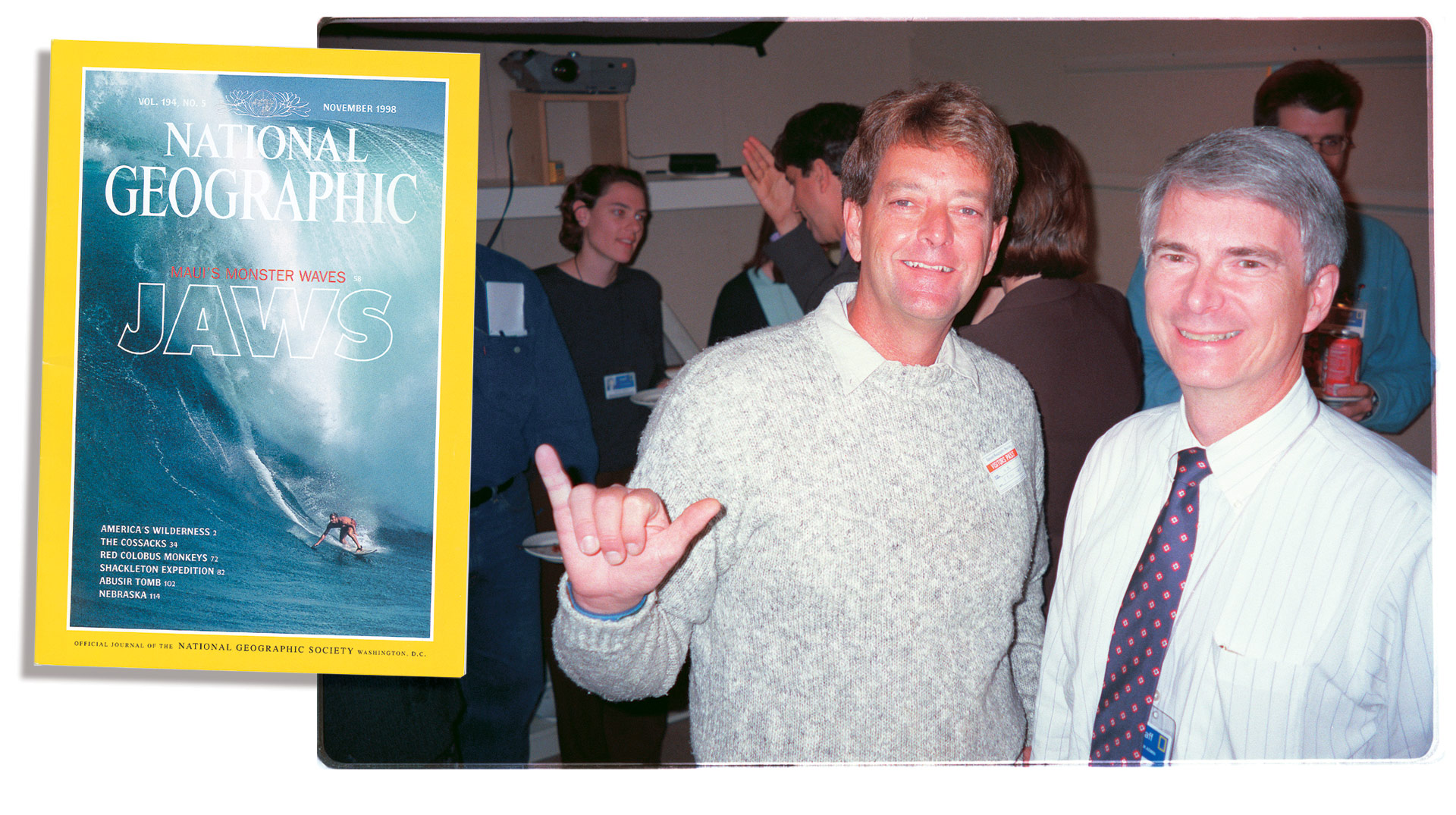 If making waves is what we’re talking about, then Patrick McFeeley, our contributing photographer, has made a big one with his JAWS picture.

A SHAKA AT NATIONAL GEOGRAPHIC: Photographer Patrick McFeeley with Chief Editor Bill Allan at the traditional staff cover party. The international surfer’s sign is said to have originated in Hawaii when an old fisherman by the name of Shaka would paddle out to sea past the surfers everyday. As he waved, the surfers would wave back mimicking the fisherman’s fingers as they were lost in a fishing accident.

HOW BIG of a wave do you need to have in order to make it to the November cover of National Geographic Magazine? The answer is a pretty Big Wave. If making waves is what we’re talking about, then Patrick McFeeley, our contributing photographer, has made a big one with his JAWS picture.

Aside from catching the cover ride, McFeely also managed to catch fourteen pages, including a fold–out spread inside the magazine. The article entitled In the Teeth of JAWS is written by Joel Achenbach, a reporter for the Washington Post and the author of Why Things Are. There were no new images added to the already published JAWS book that McFeeley put together with the help of Bjorn Dunkerbeck (see Making Waves Vol 5 Issue 2 1997). The photographs in the article clearly overshadowed the brief, but extremely informative article. Leave it to National Geographic to really know how to explain things in so few words.

It’s common knowledge among photographers in the Geographic tradition, that for every photograph published, there are a thousand rejects. Seeing the length of the article and the two–page description of what makes JAWS such a big deal, it’s clear that the refinement happens not only in the photo department but also elsewhere in the magazine. For a simple half–page illustration on how the wave builds and breaks on this particular spot, Geographic geologists were sent to Maui to measure the floor of the ocean.

In this article Peter Cabrinha is prominently featured as well as quotes from Laird Hamilton, Dave Kalama, Mark Angulo, Luke Hargreaves, Robby Seeger and Robby Naish. Cabrinha has also made big waves recently on the silver screen. He, Rush Randal and a few other pioneers of JAWS were part of a motion picture called In God’s Hands which was released in movie theaters across the country and is now available at your local Block Buster movie rental store.

But for photographer McFeeley, his success is shared and envied by many. He did not put his own name in his JAWS book because of concern for the delicate social balance of Maui’s ego driven photo community and not wanting to take the attention away from “the greatest group of people I’ve ever seen.” Well the cover of National Geographic blew that thought out of the water.

It was Chief Editor William Allen who first noticed McFeeley’s book and to his credit, Allen took the JAWS idea and broke some tradition at National Geographic by publishing a previously used photo on the cover.  We looked with great delight at the issue and the photographs sent to us by Geographic’s Elizabeth Krist. The photo editor had sent us pictures taken at the traditional cover party held in honor of the photographer in Washington DC. Who would have guessed this fate of a man who first persuaded our editors to publish some of his pictures?

Who would have guessed that a simple, inexpensive inflatable board designed by our technical editor Ken Winner and marketed by Dave Johnson of North Sports, would earn the 1998 IMTEC Innovation Award? Yes, the WindGlider is one of eleven winning category given out by the International Marine Trade Exhibit and Conference this year in Chicago.

Aside from winning the award for the most innovative product of the year, the WindGlider has become the largest selling sailcraft of any kind in the world in less than a year. Figures for next year are estimated to triple the 15,000 units sold worldwide. This is great news to an industry who has forgotten the entry level market. Analysts claim that windsurfing is going to be a hot sport and many companies are scrambling to develop new entry level boards.

This magazine is also getting its fair share of attention and awards. Vol. 5 Issue 4 of this year, the publication received the Bronze Medal in the Gold Ink Award for excellence. Its last issue, with Senator John Kerry on the cover, caught the media’s attention and was mentioned, quoted or illustrated in practically all the major newspapers and some TV stations across the country. Recently, publisher/editor John Chao was in O’Hare airport and presented Mike Wallace of 60 Minutes a copy of the Kerry issue. Upon seeing the magazine, Wallace exclaimed, “I’ve heard about this!” So what about the Senator? The Windsurfer Who Could be President? What kind of political waves is he making?

According to Brian McGrory’s article recently in the Boston Globe entitled Kerry May See Opening for Presidential Run, “[Kerry] is showing increasing signs that he will launch a candidacy for president next year and is planning to make a decision in the next couple of months.”

While the article establishes Vice-President Al Gore as a formidable foe, it also claims that Gore’s support may be widespread, but not deep and that the continuing volatility of the economy and other revelations about Clinton’s private life could cause Gore to lose support.

According to Kerry’s aides, the Senator from Massachusetts continues to be invigorated. His recent swing through New Hampshire (the home state of this magazine) gave him a further impetus to continue to “explore the presidential campaign.” The suggestion is made that the longer Kerry mulls a campaign, the more likely he is to run.

Mulling over issues is exactly what the Senator did for eight hours during the around the island Martha’s Vineyard’s windsurfing race this fall. Following the race day, Kerry appeared on Face the Nation and became the first person to step out on television and suggest that the Republicans abbreviate the impeachment process and get the proceedings to the House. The proposal received widespread attention and Kerry’s televised proposal was adopted. Windsurfers should be delighted to know that an important political step was formed and shaped while slogging on a windsurfer in light air.

While Kerry continues to figure out his agenda for a presidential run, he has increased his efforts to retire his lingering campaign debts from his senate race. Recently in another “breakneck” across the country jaunt, the Senator flew to LA and  Hawaii for some fund raising events. While in Hawaii, Kerry took a weekend to visit Maui and meet up with some of the PWA stars at Ho’okipa.

SENATOR, THIS IS JOSH STONE: “Yes I know who you are.” “Hey! No way! I know who you are! You’re the guy on the cover!” A brief exchange during Senator John Kerry’s short visit to Ho’okipa. Behind them is Louie Hubbard, (left) PWA’s race organizer and the man who pulled off the TransAtlantic Windsurf Race.

The timing couldn’t have been better as this was the first time in six years that a Professional World Cup Event, The Aloha Classic, returned to Maui. But unfortunately, the wind provided the Senator only a few hours of sailing off the waters of Sprecklesville. Regardless, the affairs of the nation follow him and interviews such as the Boston Globe article quoted here, were made while Kerry waited for the wind to come up.

The big news on Maui was the imminent dethronement of Bjorn Dunckerbeck from his ten-year domination of the world title. American Kevin Pritchard US 999 and his brother Matt Pritchard all were within striking distance to take the overall title. The point standings were so close going into the event that either one of the two American brothers could topple windsurfing’s equivalent to the “Terminator. “

Toppling was just what Neil Pryde was concerned about after ten years of World Cup domination. The possibility of the fall and the realization that the company had nowhere to go but down, caused the company to send out a two–page press release entitled A New Direction. The three section headings reflect the change of heart this giant corporation has made. After 10 years of single-mindedly focusing on winning, the company, along with the impressive Mr. Neil Pryde, did a little soul searching. They came up with an eloquent vision which redirects its efforts towards the grass roots.

Highlighted in the release were these headlines: Winning. It Costs but does it pay? Sowing the Seeds of Tomorrow’s Success and From Domination–To Participation. If you read the interview with Mr. Neil Pryde in our 1994 (Vol 2 Issue 1) issue, you’ll see that this is a major change of heart and certainly something applauded by many in the industry.

THIN AIR AT THE TOP: Kevin Pritchard came to within less than half a point of becoming the PWA over-all champion for 1998. Even at the top it’s a shaky future as sponsoring companies reassess the passing of an era dominated by Bjorn Dunckerbeck. (right) Mike Piltzecker, the newest member of the AW staff, will champion clinics and empower instructional courses for NEW instructors for a widespread growth of the sport. 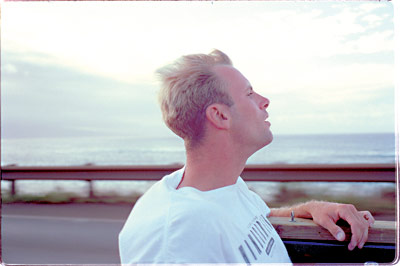 But as Paul Harvey would say, “The Rest of the Story.” Well, that is something that would fill a novel. It is windsurfing’s corporate soap opera played out on the beaches and in the sail lofts of Maui. It has a full array of characters that includes the Pritchard brothers, their training partner Phil McGain, and a brilliant sail designer by the name of Barry Spanier all banded together like a union to achieve winning results while combatting the inner politics of a big corporation. Meanwhile, the timing of the change of direction might be interpreted as a player deciding to take home his ball because he can’t win. The real story behind the scenes is, as always, far more interesting.

Whether this vision will be carried out or not is left to be seen. Dunckerbeck retained his dominance by a fraction of a point and who knows what another year will bring.

What another year will bring to American Windsurfer is expansion. On top of having Ken Winner as the technical editor to develop equipment testing and evaluation, the magazine has also brought on Mike Piltzecker as its new managing and instructional editor. Piltzecker has been instructing windsurfing for ten years and during that time he has directed and managed several windsurfing schools including the Hood River Windsurfing School and the Cort Larned Windsurfing School of San Francisco.

Piltzecker brings to American Windsurfer valuable knowledge. “I hope to incorporate an instructional editorial plan that will allow each issue to stay closely focused on one skill, allowing advanced sailors to become more consistent and polished while intermediate and entry-level sailors develop and establish a strong base of skills.” In addition, as a certified instructor trainer for the Windsurfing Instructors of America, Piltzecker will be conducting instructor training camps with the magazine beginning this spring. (See ad across the page)

Instruction is the buzz word in the industry these days. Sailboard Vacations of Aruba under its new owner/manager Phil Bradley has hired another Top Gun instructor by the name of Andy Brandt to head up its school under the warm Caribbean sun. Added to this equation is a facelift at the resort, with a new swimming pool and remodeling of some rooms. American Windsurfer’s second board test of the year will be conducted in Aruba in conjunction with Sailboard Vacations, Vela, and Roger’s Windsurf Place. Look for it in late Spring of ’99.