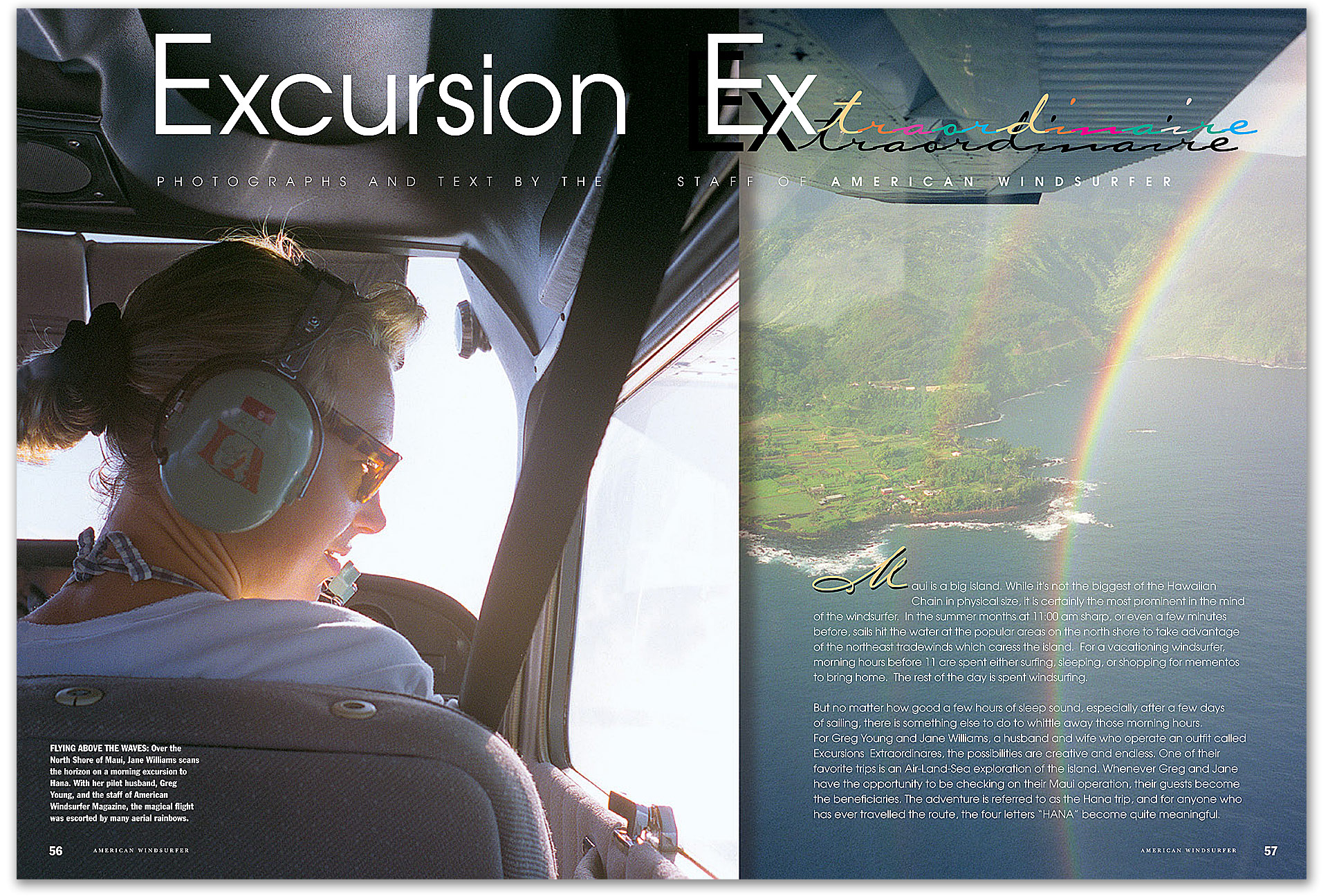 WE CALL IT THE “HANA TRIP” says a sleepy Greg Young… 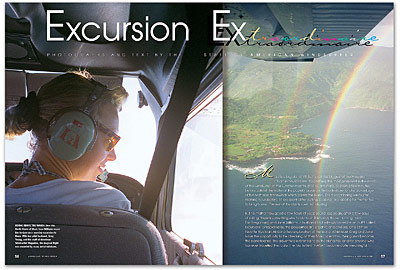 FLYING ABOVE THE WAVES: Over the North Shore of Maui, Jane Williams scans the horizon on a morning excursion to Hana with her pilot husband, Greg Young, and Editor of American Windsurfer Magazine. The magical flight was escorted by many aerial rainbows.

MAUI IS A BIG ISLAND. While it’s not the biggest of the Hawaiian Chain in physical size, it is certainly the most prominent in the mind of the windsurfer.  In the summer months at 11:00 am sharp, or even a few minutes before, sails hit the water at the popular areas on the north shore to take advantage of the northeast tradewinds which caress the island.  For a vacationing windsurfer, morning hours before 11 are spent either surfing, sleeping, or shopping for mementos to bring home.  The rest of the day is spent windsurfing.

But no matter how good a few hours of sleep sound, especially after a few days of sailing, there is something else to do to whittle away those morning hours.

For Greg Young and Jane Williams, a husband and wife who operate an outfit called Excursions  Extraordinary, the possibilities are creative and endless. One of their favorite trips is an Air-Land-Sea exploration of the island. Whenever Greg and Jane have the opportunity to be checking on their Maui operation, their guests become the beneficiaries. The adventure is referred to as the Hana trip, and for anyone who has ever travelled the route, the four letters “HANA” become quite meaningful.

WE CALL IT THE “HANA TRIP” says a sleepy Greg, as he reaches over the counter for his coffee, “and it should take about three or four hours, so we will be back by noon to sail.” Hana is a town about 40 miles up the coast from Paia and usually a six-hour round trip drive.  In order to make the excursion in four hours,Greg will have to take advantage of his private pilot license and a small rented Cessna.

Thirty minutes and a cup of Kona later, the plane is taxiing on the runway of Kahului International Airport. Once airborne, the plane passes through visiting showers brought across the ocean by the northeast trades. Jane, in the co-pilot seat, serves as a tour guide and gives running commentary on the landmarks familiar to windsurfers.  “There’s Ho’okipa…And there’s Jaws.”  The  perspective from  the air is reminiscent of the old TV show, “Fantasy Island.”  When the plane touches down at the Hana Airport, it is the only aircraft on the field.

There’s not much of a breeze blowing, but Greg ties down the plane anyway. Jane pulls a backpack with water and a few sandwiches from behind a passenger seat while Greg dons a safari  hat and laces up his boots before we walk into the head-high jungle. The sweet scent of guava fills the entrance to the trail. Underfoot, the earth turns from a soft red humus to abrasive pieces of hardened  lava and quickly vegetation becomes sparse.

At the water’s edge, swells crash methodically against the basaltic cliffs, sending rainbow tinged plumes of water into the air that instantly turn to steam when they meet the hot rocks.

Thirty minutes along the lava scoured desert landscape, we come to a small inlet crowned by a magical black beach. It is here that the Hana excursion peaks. First, an invigorating swim in the surf then an tour of several stunning caves that border the beach.  Finally we hike another 5 minutes up into the ridge and come across another cave with a pristine natural pool filled with frigid spring water. Though we leap into the pool and drink the water, the wind begins to call us back to the waves.