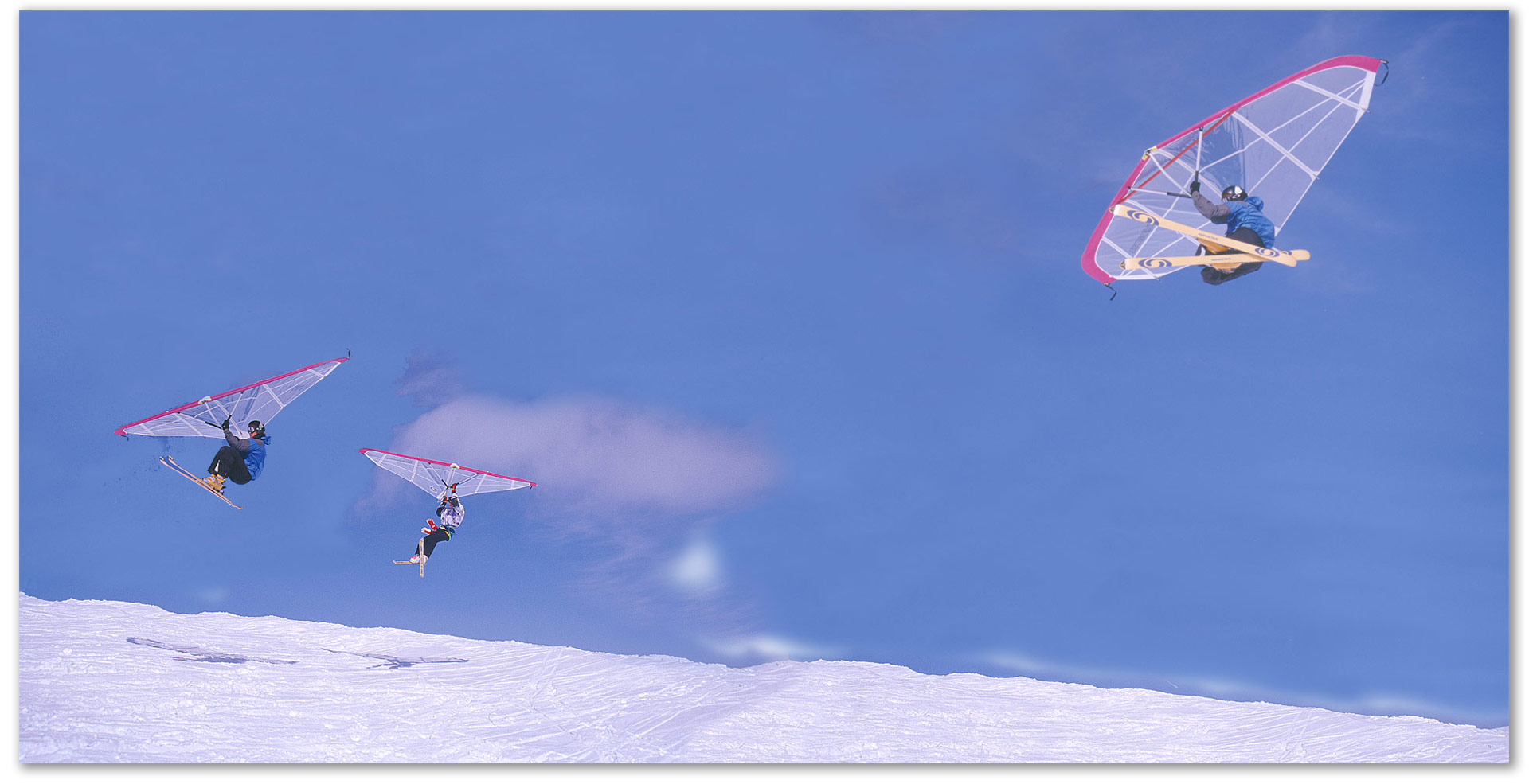 Design Parameters for Skimbat Wingsurfers
Several new sail innovations and enterprises have emerged in the field of winter and ice sailing in recent years. Manufacturers aim to create lighter, easily rigged, and more efficient sailing equipment. The currently available equipment suitable for ice and snow sailing are: The international DN class for traditional ice yachts. The Canadian Snowfer, the French FILvent products Ice and Snow Funboards, ICE FLYER are sleds fitted with windsurfing rigs. For hand-held wingsails there is the Finnish SKIMBAT amd the German Skatewing. There are many line-guided kites such as the Canadian Concept Air, the French Wipika and there is the parachute-like chutes from the Canadian Up-Ski ball.

Ice yachts, skate sails, and sail sleds using a windsurfing rig are suitable for use on frozen seas and lakes, and many sleds can also be used for snow sailing. The Up-Ski, and kite sails can also be used for sailing in wintry weather country as well as with roller blades. Thus, winter sailing has expanded its horizons and moved from the ice to terra firma. But what has proven to be the most dynamic recreation of all yet relatively undiscovered by the general public, is a sport that has come out of windsurfing and hangliding. The SKIMBAT wingsurfer developed by Skywings Ltd. has all the potential for becoming a new international winter sport. It is compact, easy to learn, safe, simple, efficient and it brings together the very best of several sports.

The Wingsurfer Sailing Principle
The operating principle of the SKIMBAT wingsurfer is that the same side of the wing is always aimed at the wind; to change tack, the wing is turned and angled. The wingsurfer is longitudinally symmetrical and is shaped like a wing.

SKIMBAT is a “flying rig”, resembling a small hang glider. In fact, because of the flying properties of the sail, the concept and design parameters of the wingsurfer can be described as a hybrid comprising a traditional windsurfer sail and a hang glider.

A Rigid Wing
The standard SKIMBAT wingsurfer, with an area of 4.8 meters, has aerodynamically shaped light tube battens much like a hang glider. These give added rigidity and a wing profile to the sail. The shape of the battens is a compromise between light wind and strong wind and an extensive range of weather conditions. A high batten profile increases the pull of the sail in low wind and on snow, while a low batten profile is advantageous at high speeds and low friction, for instance on ice. In favorable wind and weather conditions, the SKIMBAT wingsurfer can attain speeds of up to 100 km/h (!).

The rigid, pre-formed battens keep the deepest part of the sail, the camber, in place so that a sudden gust of wind cannot move it to the trailing edge. The battens also improve manageability and safety. The light, stiff battens are made of drawn aluminun tubing in accordance with the material standard 7075 T6.

The Rig
The light and shock resistant rig structure makes the SKIMBAT wingsurfer easy to handle. The mast tubes are fiberglass manufactured with the Exel pulltrusion method, and the rest of the rig comprises light, rigid aluminum tubing and plastic components. Thanks to its lightness (5.5 kg), SKIMBAT floats in the surfer’s hands even in winds as light as 2 to 3 m/s, carrying its own weight.

The epoxy reinforced fiberglass “antennas” at the wingtips, introduced in a SKIMBAT prototype as early as 1992 and 1993, increase the streamlining and reduce the wing’s tip vortices. The pliable and flexible antennas tighten the trailing edge of the sail and also act as shock absorbers when the wingtip hits the ice. The antennas resemble the flex-top designs that have appeared on windsurfers in recent years.

Stability
The SKIMBAT wingsurfer is easy to handle because of its stability. Aswith aircraft wings, stability is here divided into pitch stability, roll stability, and yaw stability.

The pitch stability of the wing, ensured in aircraft with the horizontal stabilizer in the tail, is largely based on the wingtip twist. The twist is created with the outermost battens of the wing (the reflex battens) and the antennas. The pitch stability of the wingsurfer is evident in that the wing tends to return to normal position if it is over-sheeted, and also the leading edge of the sail will not dive when the sheeting hand is slack. The wingsurfer is extremely stable, and the surfer does not need to use great force to control it. In a hang glider, pitch stability refers to the glider’s tendency to stall or go into an uncontrollable dive.

The roll stability of SKIMBAT has been improved by giving the wing a slight V angle, viewed from the front. The wing is automatically balanced if disturbed by a sudden gust, as the lower half of the wing generates more lift than the upper one, forcing the wing into a neutral position.

The third factor improving stability is yaw stability, which keeps the wingsurfer in the direction intended. The wing halves have been raked to create a leading edge angle of less than 180°, a feature that also improves yaw stability in aircraft. If the wing is turned obliquely, for instance by a gust, the forward half of the wing generates more drag, forcing the wing back to neutral position. A modern hang glider has nearly the same leading edge angle as the SKIMBAT wingsurfer, approximately 135.

Drag
The drag of an aircraft wing is divided into parasitic and induced drag. Parasitic drag is generated by all the fixed parts of the sail and rig that collide with air in movement. It can be further analyzed into profile and form drag. Profile drag is generated by friction between the wing and the air. SKIMBAT has a fairly low profile drag, because the battens have an aerodynamically optimum shape and the material is smooth sailcloth or monofilm. Form drag involves all other components, such as the rig and the surfer himself or herself. This factor can be influenced by wearing appropriate clothing and adopting the correct posture. Induced drag is generated by reduced efficiency as the air flow escapes the wingtips and causes a tip vortex. In SKIMBAT, the tip vortices have been somewhat reduced with the antennas.

Ready? Get Set and Go!
Once you put these technical concepts aside, the Skimbat Wingsurfer is without a doubt, one of the more fun winter recreations. All you need is some wind, a frozen lake or a snow covered field and the desire to dance with the wind. On ice, the speed and freedom is accentuated and the rush of weighlessness becomes one of the most exceptional sensation that you walk away from the Skimbat. Unlike the windsurfing sail that propels you forward, the Skimbat wings pulls you forwards and upwards. For those of you who laments these winter months, try the Skimbat—You’ll never dread winter again.