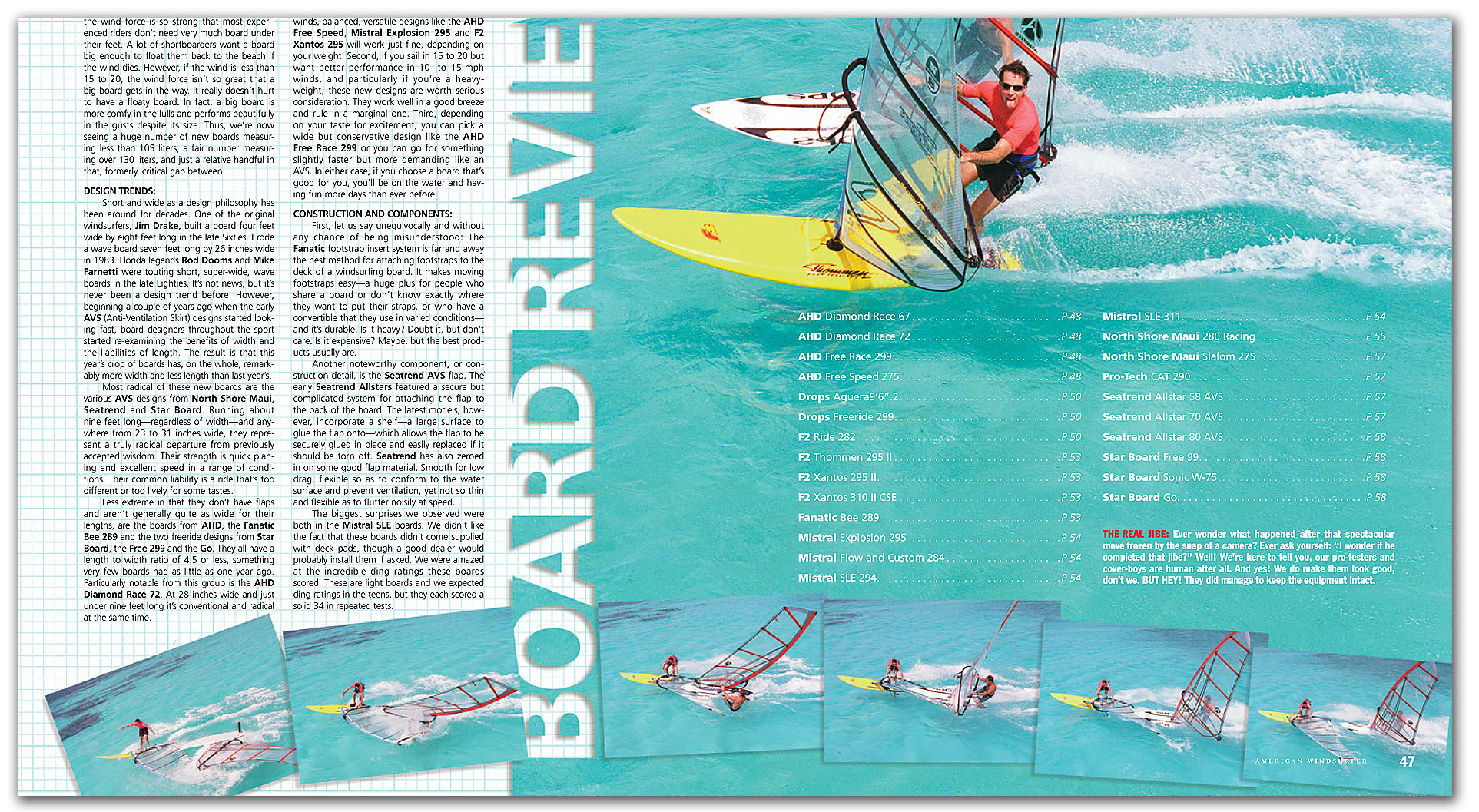 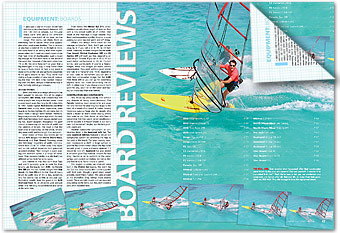 THE REAL JIBE: Ever wonder what happened after that spectacular move frozen by the snap of a camera? Ever ask yourself: “I wonder if he completed that jibe?” Well! We’re here to tell you, our pro-testers and cover-boys are human after all. And yes! We do make them look good, don’t we. BUT HEY! They did manage to keep the equipment intact.

IN YEARS PAST a test of this sort would have included quite a few boards between 105 and 130 liters in volume, but this year there were only about six different designs—one-fourth of the total—in that range. This stems, we think, from an interesting fact of nature: Wind force quadruples when wind speed doubles. That is, as soon as you have a wind of 15- to 20-mph or more, the wind force is so strong that most experienced riders don’t need very much board under their feet. A lot of shortboarders want a board big enough to float them back to the beach if the wind dies. However, if the wind is less than 15 to 20, the wind force isn’t so great that a big board gets in the way. It really doesn’t hurt to have a floaty board. In fact, a big board is more comfy in the lulls and performs beautifully in the gusts despite its size. Thus, we’re now seeing a huge number of new boards measuring less than 105 liters, a fair number measuring over 130 liters, and just a relative handful in that, formerly, critical gap between.

Design trends:
Short and wide as a design philosophy has been around for decades. One of the original windsurfers, Jim Drake, built a board four feet wide by eight feet long in the late Sixties. I rode a wave board seven feet long by 26 inches wide in 1983. Florida legends Rod Dooms and Mike Farnetti were touting short, super-wide, wave boards in the late Eighties. It’s not news, but it’s never been a design trend before. However, beginning a couple of years ago when the early AVS (Anti-Ventilation Skirt) designs started looking fast, board designers throughout the sport started re-examining the benefits of width and the liabilities of length. The result is that this year’s crop of boards has, on the whole, remarkably more width and less length than last year’s.

A PELICAN’S EYE VIEW on a day in the life of a board test. The 60’ catamaran, Pelican II, allowed the AW testers to venture into the rougher waters off the coast of Aruba.

Most radical of these new boards are the various AVS designs from North Shore Maui, Seatrend and Star Board. Running about nine feet long—regardless of width—and anywhere from 23 to 31 inches wide, they represent a truly radical departure from previously accepted wisdom. Their strength is quick planing and excellent speed in a range of conditions. Their common liability is a ride that’s too different or too lively for some tastes.

Less extreme in that they don’t have flaps and aren’t generally quite as wide for their lengths, are the boards from AHD, the Fanatic Bee 289 and the two freeride designs from Star Board, the Free 299 and the Go. They all have a length to width ratio of 4.5 or less, something very few boards had as little as one year ago. Particularly notable from this group is the AHD Diamond Race 72. At 28 inches wide and just under nine feet long it’s conventional and radical at the same time.

Then there’s the Mistral SLE 311, which combines an old-school length of over ten feet with a new-school width of 27 inches. One result of this marriage is huge volume (182 liters) and tremendous stability. Another is quick planing but poor top-end speed and stiff jibing.

UP CLOSE AND PERSONAL is what testers in Aruba had to endure. Every move and jibe, as illustrated above by Mark Stumpp, were closely scrutinized by a fleet of staff papparazis.

What’s this design trend mean for the average windsurfer? First, don’t get carried away by it. If you sail a lot in 15- to 20-mph winds, balanced, versatile designs like the AHD Free Speed, Mistral Explosion 295 and F2 Xantos 295 will work just fine, depending on your weight. Second, if you sail in 15 to 20 but want better performance in 10- to 15-mph winds, and particularly if you’re a heavy-weight, these new designs are worth serious consideration. They work well in a good breeze and rule in a marginal one. Third, depending on your taste for excitement, you can pick a wide but conservative design like the AHD Free Race 299 or you can go for something slightly faster but more demanding like an AVS. In either case, if you choose a board that’s good for you, you’ll be on the water and having fun more days than ever before.

BRACING FOR A LAUNCH: Yeny Conde, of Pelican Water Sports, prepares to enter the water assisted by Alberto Benitez. The two residents of Aruba helped the test team organize the ride on the catamaran and enjoyed the pleasure of riding some new gear. Both parties are serious contenders for the Arubian entry into the next Trans-Atlantic Windsurf Race, the TAWR 2000.

Construction and components:
First, let us say unequivocally and without any chance of being misunderstood: The Fanatic footstrap insert system is far and away the best method for attaching footstraps to the deck of a windsurfing board. It makes moving footstraps easy—a huge plus for people who share a board or don’t know exactly where they want to put their straps, or who have a convertible that they use in varied conditions—and it’s durable. Is it heavy? Doubt it, but don’t care. Is it expensive? Maybe, but the best products usually are.

A POOL PARTY of new boards: What better use of Sailboard Vacation’s brand new pool than to christen it with a bunch of submerged boards to measure their volume. This, the most laborious part of a board test, is viewed by the staff to be the most fun.

Another noteworthy component, or construction detail, is the Seatrend AVS flap. The early Seatrend Allstars featured a secure but complicated system for attaching the flap to the back of the board. The latest models, however, incorporate a shelf—a large surface to glue the flap onto—which allows the flap to be securely glued in place and easily replaced if it should be torn off. Seatrend has also zeroed in on some good flap material. Smooth for low drag, flexible so as to conform to the water surface and prevent ventilation, yet not so thin and flexible as to flutter noisily at speed.

INTO THE SUNSET is often considered to be the best time to sail by sailors in Aruba. Flat water and serene colors from a setting sun can flood the senses with a mystical light. It’s a special time of communion with wind, water and two new sets of  the latest in windsurfing gear.

The biggest surprises we observed were both in the Mistral SLE boards. We didn’t like the fact that these boards didn’t come supplied with deck pads, though a good dealer would probably install them if asked. We were amazed at the incredible ding ratings these boards scored. These are light boards and we expected ding ratings in the teens, but they each scored a solid 34 in repeated tests.