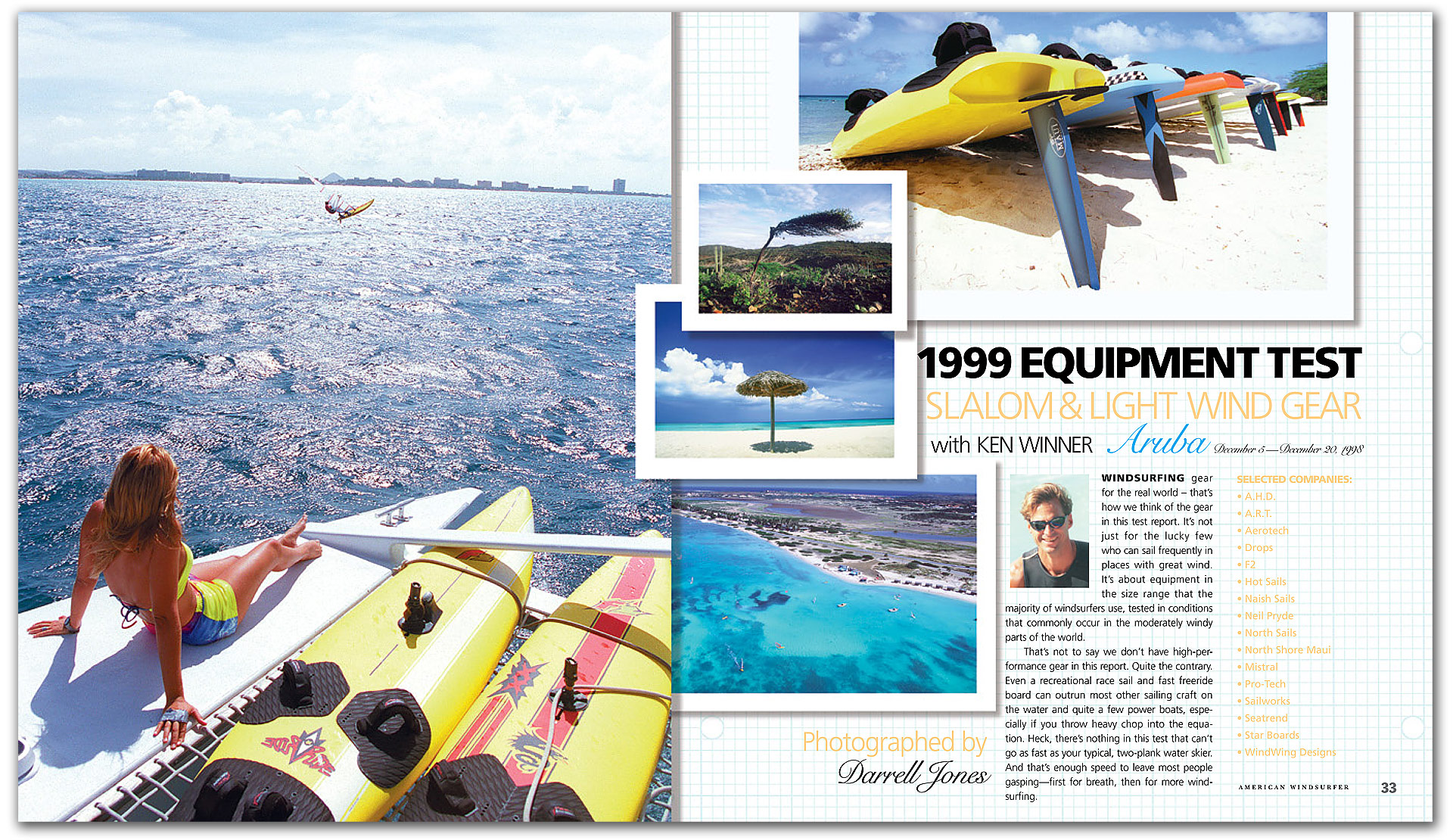 …enough speed to leave most people gasping—first for breath, then for more windsurfing.

A PRIVATE ESCORT: The 1999 Slalom & Light Wind Gear Test in Aruba had the escort of Pelican WaterSport’s 60 ft. catamaran. Spare boards, sails, sailors and loads of fun were strapped aboard this unique, mobile, windsurfing, party platform.

Windsurfing gear for the real world – that’s how we think of the gear in this test report. It’s not just for the lucky few who can sail frequently in places with great wind. It’s about equipment in the size range that the majority of windsurfers ride, tested in conditions that commonly occur in the moderately windy parts of the world.

ALL BUSINESS: The logistical nightmare of transporting a flock of boards and sails to, and then testing all of this equipment on an offshore island like Aruba is formidable. Technical Editor Ken Winner, the AW staff and a group of hardy guest testers spent three weeks in December to compile this issue’s comprehensive results.

That’s not to say we don’t have high-performance gear in this report. Quite the contrary. Even a recreational race sail and fast freeride board can outrun most other sailing craft on the water and quite a few power boats, especially if you throw heavy chop into the equation. Heck, there’s nothing in this test that can’t go as fast as your typical two-plank water skier. And that’s enough speed to leave most people gasping—first for breath, then for more windsurfing.

Aruba? Sure, the water is flat at Fishermen’s Huts, but doesn’t the wind howl? Well, yes. From mid-winter to early fall the trade winds tend to blow hard in Aruba. But the fall rainy season usually drops the trades a couple notches and by early December they’re only just filling back in. The result: a narrow window of opportunity for testing bigger boards and sails.

We scheduled this test session for the first three weeks of December hoping to get light–to–moderate wind. Except for a week in which 6.0 sails were often a handful that’s exactly what we got. We also scheduled for this place and time because we wanted our guest testers to spend some real time on the big boards. The tendency in test sessions held on Maui’s north shore is for testers to concentrate on the small gear and to try big gear only as an afterthought. There’s also a tendency for Maui test sessions to attract sailors with more than average experience. Given that we wanted a range of testers and wanted them to focus on the bigger gear, Aruba in December was the obvious choice.

Once we’d decided on Aruba, opting for the Windsurf Village—a windsurfing resort operated by Sailboard Vacations—as headquarters was the next obvious choice. Why so obvious? Testing requires changing gear frequently and the easiest spot to get in and out of quickly is the board mooring area at the Windsurf Village. Sailing out to clean wind was a matter of reaching off for a minute. Sailing back to the board moorage involved a couple of tacks upwind and an easy reach. No interminable tacking upwind and no wind shadow from six-story hotels. As a result, we were able to test more in two hours at the Windsurf Village than we would have managed in three or four at some other locations.

SHE AIN’T HEAVY: 100 lb. Travis Lester carries a contender to the evaluation site (the beach). A test of each board was thoroughly conducted including a forced submersion at the Windsurf Village swimming pool. Sailboard Vacations, the host of the test, was recently acquired by Phill Bradley who stands on guard (below) over this popular windsurfing resort.

That’s not to say the only appeal of the Windsurf Village is easy access to good sailing. There are plenty of other attractions. It’s removed from the hustle of the more tourisy beaches yet close enough that anyone who wants to join that scene need only walk for ten minutes. The Windsurf Village is also a welcoming place. The owner and staff made us feel at home (there’s a nice thought), as did the cool, cozy rooms and warm, friendly atmosphere. Just as importantly, the Windsurf Village offered us a pool in which to perform volume tests, and a shaded glen in which to rig and measure equipment. Convenient, equipped and hospitable – it doesn’t get any better than that.

Well, we take that back. It actually got better while we were there. When we arrived on December 1st, the Windsurf Village already had several superb instructors on staff. Guys like Mark Archer and Nathaniel “Mac” MacFarlane. Before we left, the staff had been bolstered with the addition of Jason Voss and the incomparable Andy Brandt, to form one of the most accomplished groups of windsurfing instructors on the planet. If they can’t solve your technique problems, you’re probably not breathing.

“ANOTHER DAY AT THE OFFICE” says Andy Graham of Silverthorne, Colorado. The never ending job of a tester continues into the night at the Pelican Nest, the only pier-dock bar & seafood grill restaurant on the island. Good food mixed with good company which included Nevin Sayre and Glenn Fuller (far left) made the task bearable(?)…huh-hum.

The Aruba test session was smaller than the one on Maui, and the experience level of the testers was quite varied. We didn’t require that testers be comfortable in high winds and rough chop—an obvious requirement for the test site on Maui—because of the different equipment and conditions in this session. In fact, we were hoping to get at least some testers who would feel challenged by Aruba’s conditions: testers who would represent the great many windsurfers who don’t get to sail that often and who don’t necessarily succeed with every waterstart, but who are every bit as capable of enjoying the sport as the most dedicated 200–day–per-year windsurf rat.

As luck would have it, we attracted a remarkable collection of women to this session and just enough guys to make it look legit. Ranging from the highly skilled and analytical Mark and Ilona Stumpp to the almost intermediate level of Nancy Messer, our testers fit the bill perfectly. Even luckier, they made for lively companions at Aruba’s many restaraunts, bars, discos, night clubs, casinos, and cafés.

As for test regulars, Glenn Fuller was back as equipment manager, and Mike Piltzecker worked on sailing technique with the guest testers everyday. In addition we were fortunate to have Nevin Sayre and helping out. Nevin, of course, is a former World Cup pro and US national champion. When he retired from the pro circuit in 1991, he was ranked second in the world in slalom and had just finished winning the US national championships. Since then he’s worked at Fiberspar as part owner, product tester and marketing manager for windsurfing products. Roger, a former national champion and Aruba’s Olympic entry in Barcelona, owns and runs Roger’s Windsurfing Place in Aruba, just down the beach from the Windsurf Village.

Windsurfing gear for the real world

Ok, so we had only a trickle of celebrity windsurfers passing through this test session rather than the flood that hit us on Maui. And these celebrities were the kind that works with regular recreational windsurfers daily, not the kind that jets across continents and oceans weekly. But if Nevin and Andy are no longer rock stars of the jet-setting sort, they were exactly the kind we wanted in Aruba. They fit the theme: Windsurfing gear for the real world.