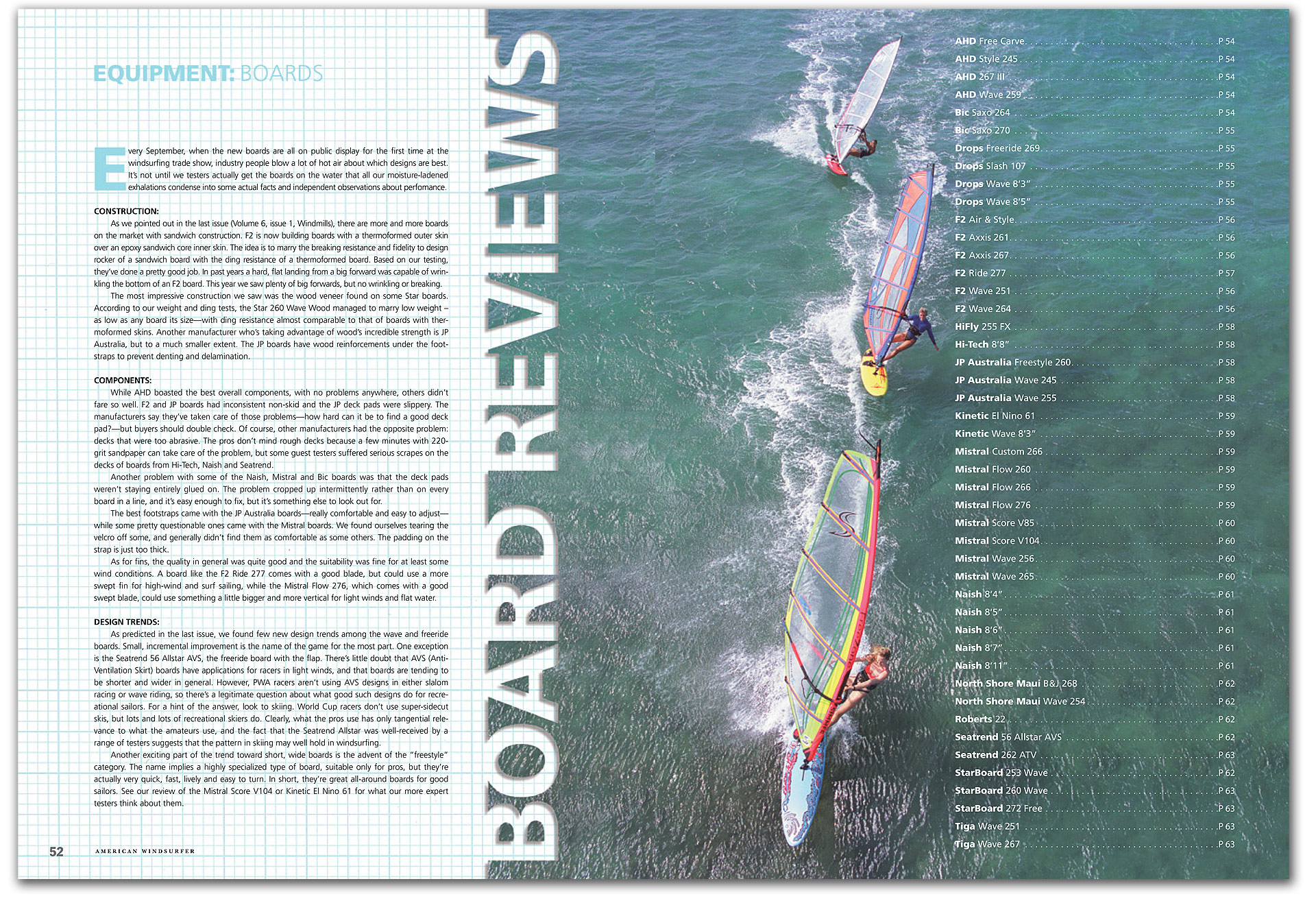 The most impressive construction we saw was the wood veneer found on some Star boards.

EVERY SEPTEMBER, when the new boards are all on public display for the first time at the windsurfing trade show, industry people blow a lot of hot air about which designs are best. It’s not until we testers actually get the boards on the water that all our moisture-ladened exhalations condense into some actual facts and independent observations about performance.

Construction:
As we pointed out in the last issue (Volume 6, issue 1, Windmills), there are more and more boards on the market with sandwich construction. F2 is now building boards with a thermoformed outer skin over an epoxy sandwich core inner skin. The idea is to marry the breaking resistance and fidelity to design rocker of a sandwich board with the ding resistance of a thermoformed board. Based on our testing, they’ve done a pretty good job. In past years a hard, flat landing from a big forward was capable of wrinkling the bottom of an F2 board. This year we saw plenty of big forwards, but no wrinkling or breaking.

The most impressive construction we saw was the wood veneer found on some Star boards. According to our weight and ding tests, the Star 260 Wave Wood managed to marry low weight – as low as any board its size—with ding resistance almost comparable to that of boards with thermoformed skins. Another manufacturer who’s taking advantage of wood’s incredible strength is JP Australia, but to a much smaller extent. The JP boards have wood reinforcements under the footstraps to prevent denting and delamination.

Components:
While AHD boasted the best overall components, with no problems anywhere, others didn’t fare so well. F2 and JP boards had inconsistent non-skid and the JP deck pads were slippery. The manufacturers say they’ve taken care of those problems—how hard can it be to find a good deck pad?—but buyers should double check. Of course, other manufacturers had the opposite problem: decks that were too abrasive. The pros don’t mind rough decks because a few minutes with 220-grit sandpaper can take care of the problem, but some guest testers suffered serious scrapes on the decks of boards from Hi-Tech, Naish and Seatrend.

Another problem with some of the Naish, Mistral and Bic boards was that the deck pads weren’t staying entirely glued on. The problem cropped up intermittently rather than on every board in a line, and it’s easy enough to fix, but it’s something else to look out for.

The best footstraps came with the JP Australia boards—really comfortable and easy to adjust—while some pretty questionable ones came with the Mistral boards. We found ourselves tearing the velcro off some, and generally didn’t find them as comfortable as some others. The padding on the strap is just too thick.

As for fins, the quality in general was quite good and the suitability was fine for at least some wind conditions. A board like the F2 Ride 277 comes with a good blade, but could use a more swept fin for high-wind and surf sailing, while the Mistral Flow 276, which comes with a good swept blade, could use something a little bigger and more vertical for light winds and flat water.

Design Trends:
As predicted in the last issue, we found few new design trends among the wave and freeride boards. Small, incremental improvement is the name of the game for the most part. One exception is the Seatrend 56 Allstar AVS, the freeride board with the flap. There’s little doubt that AVS (Anti-Ventilation Skirt) boards have applications for racers in light winds, and that boards are tending to be shorter and wider in general. However, PWA racers aren’t using AVS designs in either slalom racing or wave riding, so there’s a legitimate question about what good such designs do for recreational sailors. For a hint of the answer, look to skiing. World Cup racers don’t use super-sidecut skis, but lots and lots of recreational skiers do. Clearly, what the pros use has only tangential relevance to what the amateurs use, and the fact that the Seatrend Allstar was well-received by a range of testers suggests that the pattern in skiing may well hold in windsurfing.

Another exciting part of the trend toward short, wide boards is the advent of the “freestyle” category. The name implies a highly specialized type of board, suitable only for pros, but they’re actually very quick, fast, lively and easy to turn. In short, they’re great all-around boards for good sailors. See our review of the Mistral Score V104 or Kinetic El Nino 61 for what our more expert testers think about them.