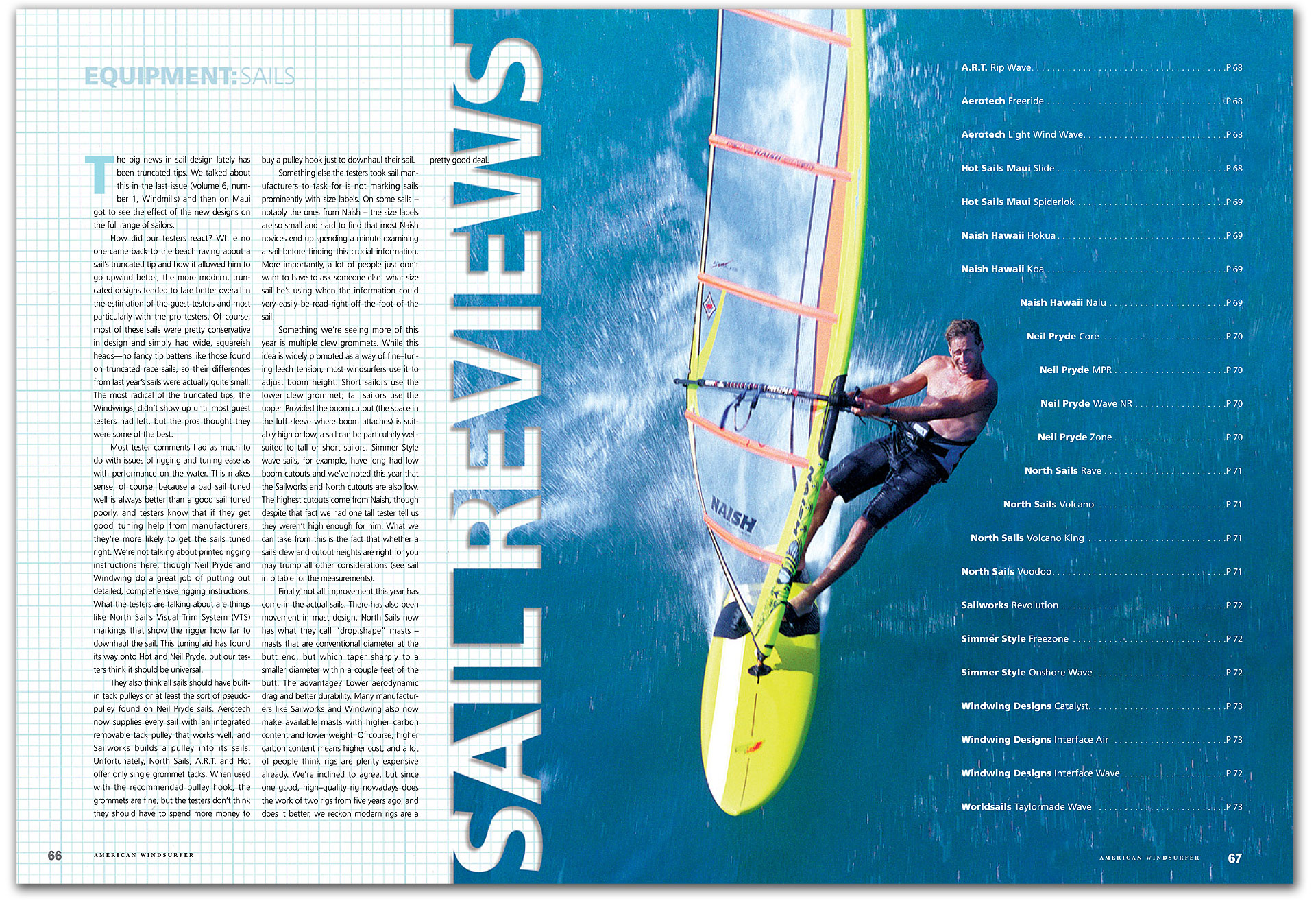 The Latest FreeRide and Recreational Race Sails: How did our testers react?

THE BIG NEWS in sail design lately has been truncated tips. We talked about this in the last issue (Volume 6, number 1, Windmills) and then on Maui got to see the effect of the new designs on the full range of sailors.

How did our testers react? While no one came back to the beach raving about a sail’s truncated tip and how it allowed him to go upwind better, the more modern, truncated designs tended to fare better overall in the estimation of the guest testers and most particularly with the pro testers. Of course, most of these sails were pretty conservative in design and simply had wide, squareish heads—no fancy tip battens like those found on truncated race sails, so their differences from last year’s sails were actually quite small. The most radical of the truncated tips, the Windwings, didn’t show up until most guest testers had left, but the pros thought they were some of the best.

Most tester comments had as much to do with issues of rigging and tuning ease as with performance on the water. This makes sense, of course, because a bad sail tuned well is always better than a good sail tuned poorly, and testers know that if they get good tuning help from manufacturers, they’re more likely to get the sails tuned right. We’re not talking about printed rigging instructions here, though Neil Pryde and Windwing do a great job of putting out detailed, comprehensive rigging instructions. What the testers are talking about are things like North Sail’s Visual Trim System (VTS) markings that show the rigger how far to downhaul the sail. This tuning aid has found its way onto Hot and Neil Pryde, but our testers think it should be universal.

They also think all sails should have built-in tack pulleys or at least the sort of pseudo-pulley found on Neil Pryde sails. Aerotech now supplies every sail with an integrated removable tack pulley that works well, and Sailworks builds a pulley into its sails. Unfortunately, North Sails, A.R.T. and Hot offer only single grommet tacks. When used with the recommended pulley hook, the grommets are fine, but the testers don’t think they should have to spend more money to buy a pulley hook just to downhaul their sail.

Something else the testers took sail manufacturers to task for is not marking sails prominently with size labels. On some sails ­– notably the ones from Naish – the size labels are so small and hard to find that most Naish novices end up spending a minute examining a sail before finding this crucial information. More importantly, a lot of people just don’t want to have to ask someone else what size sail he’s using when the information could very easily be read right off the foot of the sail.

Something we’re seeing more of this year is multiple clew grommets. While this idea is widely promoted as a way of fine–tuning leech tension, most windsurfers use it to adjust boom height. Short sailors use the lower clew grommet; tall sailors use the upper. Provided the boom cutout (the space in the luff sleeve where boom attaches) is suitably high or low, a sail can be particularly well-suited to tall or short sailors. Simmer Style wave sails, for example, have long had low boom cutouts and we’ve noted this year that the Sailworks and North cutouts are also low. The highest cutouts come from Naish, though despite that fact we had one tall tester tell us they weren’t high enough for him. What we can take from this is the fact that whether a sail’s clew and cutout heights are right for you may trump all other considerations (see sail info table for the measurements).

Finally, not all improvement this year has come in the actual sails. There has also been movement in mast design. North Sails now has what they call “drop.shape” masts – masts that are conventional diameter at the butt end, but which taper sharply to a smaller diameter within a couple feet of the butt. The advantage? Lower aerodynamic drag and better durability. Many manufacturers like Sailworks and Windwing also now make available masts with higher carbon content and lower weight. Of course, higher carbon content means higher cost, and a lot of people think rigs are plenty expensive already. We’re inclined to agree, but since one good, high–quality rig nowadays does the work of two rigs from five years ago, and does it better, we reckon modern rigs are a pretty good deal.