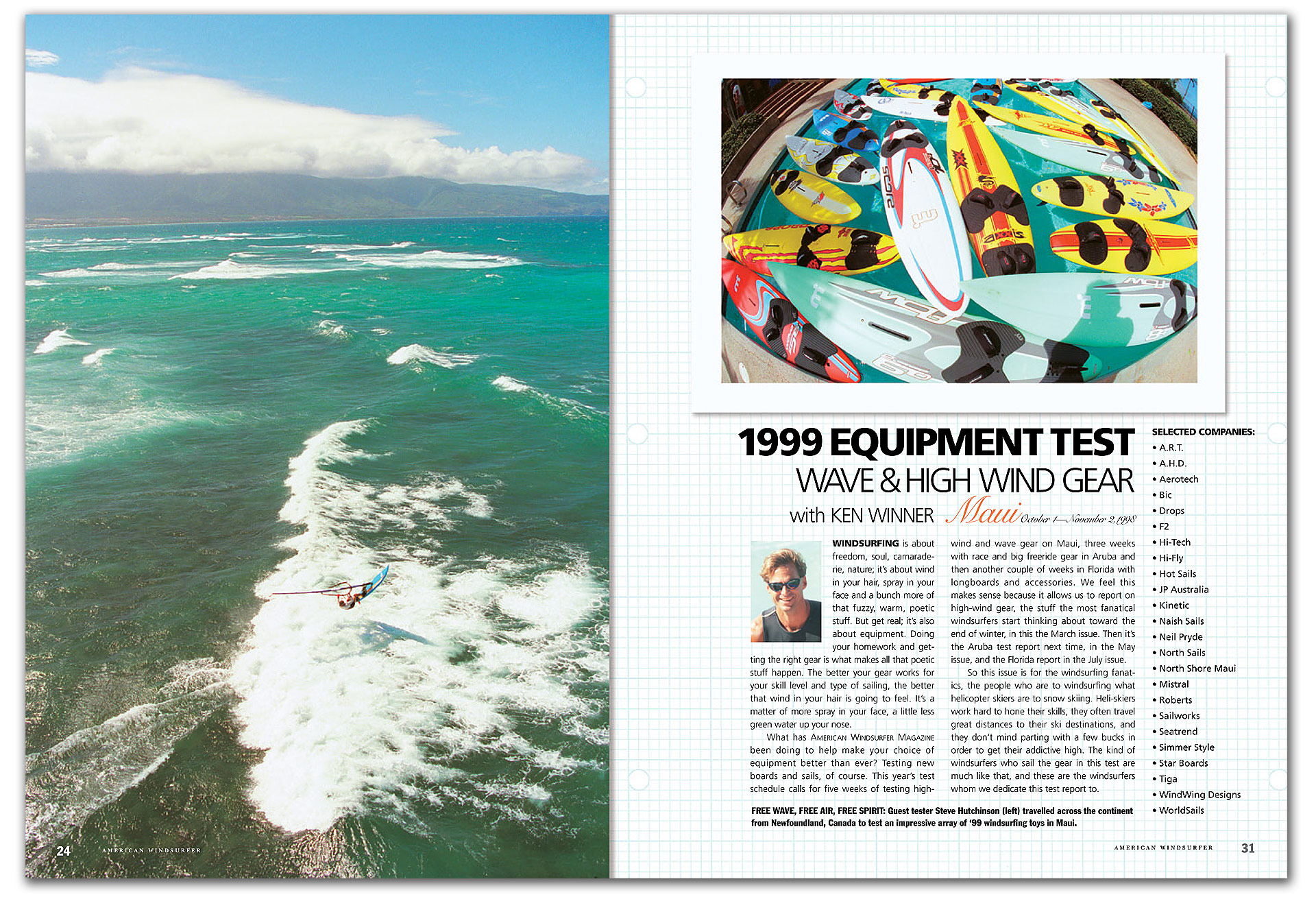 Doing your homework and getting the right gear is what makes all that poetic stuff happen.

Windsurfing is about freedom, soul, camaraderie, nature; it’s about wind in your hair, spray in your face and a bunch more of that fuzzy, warm, poetic stuff. But get real; it’s also about equipment. Doing your homework and getting the right gear is what makes all that poetic stuff happen. The better your gear works for your skill level and type of sailing, the better that wind in your hair is going to feel. It’s a matter of more spray in your face, a little less green water up your nose.

Maui, three weeks with race and big freeride gear in Aruba and then another couple of weeks in Florida with longboards and accessories. We feel this makes sense because it allows us to report on high-wind gear, the stuff the most fanatical windsurfers start thinking about toward the end of winter, in this the March issue. Then it’s the Aruba test report next time, in the May issue, and the Florida report in the July issue.

So this issue is for the windsurfing fanatics, the people who are to windsurfing what helicopter skiers are to snow skiing. Heli-skiers work hard to hone their skills, they often travel great distances to their ski destinations, and they don’t mind parting with a few bucks in order to get their addictive high. The kind of windsurfers who sail the gear in this test are much like that, and these are the windsurfers whom we dedicate this test report to.

A PARADISE AT THE END OF THE RAINBOW: Instructional Editor, Mike Piltzecker tuning up for another day at the office, Club Paradise.

THE PLACE: We rented Club Paradise, Bill Fleischer’s incomparable beach house on Maui. To anyone who likes Maui windsurfing conditions, this place truly is a corner of paradise. The house and cottage include four bedrooms, two kitchens, and fridge space enough to cool Coronas for dozens of thirsty windsurfers. The surrounding yard offers abundant rigging space in a shaded glade neatly tucked between the tennis court and pool. A short walk to the water reveals a sandy, protected cove; an idyllic spot for launching, taking a dip, or just sitting and watching the action on the water.

Beyond the cove lies a quarter mile of flat, shallow water—much smoother than the the murderous chop that torments the surface a short distance downwind—and then the famous Camp One reef, playground of pro windsurfers and amateurs alike. It doesn’t have to be a very windy day for top pros like Kevin and Matt Pritchard, Phil McGain, Robert Teriitehau, Jennifer Gately, Anders Bringdal and Robby Naish to be out here throwing forward loops, push loops, back loops, aerial 360’s, body drags, jump jibes and vulcans. Beyond the reef, where the water turns deep blue and trade wind seas meet north Pacific storm swells, other pros tune race gear and amateurs freeride the rolling ocean for hours.

The Club Paradise experience means being in the heart of the high-performance windsurfing world everyday. Feeling its pulse means watching designers from Naish, Neil Pryde, North, Gaastra and others test their latest sails. It means seeing guys like Bjorn Dunkerbeck and Peter Thommen putting board design theory to real-life trial. It means driving a few miles up the road to Jacques Bistro in Paia and rubbing sun browned shoulders with folks that windsurf 250 days a year.

Club Paradise is also a sensory experience that’s almost other-worldly. The riotous colors of the flowers, the powerful fragrance of the oleander blossoms, the cooling caress of the trade winds partially blocked by ironwood trees at the windward edge of the yard greet testers every day. Then there’s the water, diamond-speckled emerald, aqua and turquoise inside the reef; a slash of blindingly bright foam at the break; outside a profound blue, white-laced and heaving. There’s always something entrancing to look at, if not the windsurfers then the clouds or rainbows.

While it’s a refuge from road traffic and rigging hassles, particularly with a brand new paved bike path nearby, the Club is also conveniently close to shopping. Costco, Safeway and windsurfing shops lie just ten minutes in one direction, Paia restaurants and shops just a few miles the other. It’s so convenient and complete as a windsurfing place, all we had to do next was invite a bunch of friends—American Windsurfer readers, pro testers, PWA competitors and a few sail and board designers—to complete and enjoy the ambiance.

Weighty Definitions: Since adult windsurfers tend to weigh between 100 and 250lbs, we think it makes sense to say that light–weight windsurfers fit the 100- to 150lb range, heavy–weights the 200- to 250lb range and middle–weights (or medium–weights), anywhere in between. Windsurfers who fall a few pounds either side of a cusp (150lbs or 200lbs) can choose for themselves. Depending on their skill level, a powerful 145-pounder can feel more like a middle–weight and an efficient 205-pounder may feel comfortable on equipment that suits lighter sailors. We think a broad 50lb categories provide a useful guide.

THE PLAYERS: Ok, so we invited a bunch of people to come to the Club to help us test boards and sails. We didn’t want too many—this wasn’t a for-profit McBoardtest —and we wanted to make sure everyone who came would be comfortable sailing in Maui conditions, so we were a bit picky. The result was that tester skills were high, crowding was low and we got plenty of insightful comments on the products.

In addition to the guest testers, we had celebrity windsurfers stop by for some sailing, a chat, some Q&A, and a glass of juice. Robby Naish came by and answered questions ranging from Jaws to board design. Jason Polokow entertained one afternoon, and Barry Spanier hung out by the pool and talked sail design for a couple days. Robert Teriitehau, Pete Cabrinha, and a half-dozen other luminaries paid visits at one time or other, graciously signing autographs and visiting like the old friends that they are.

We also had our full-time staff: Mike Piltzecker, our instructional editor, is a gifted people person and veteran windsurfing instructor. He has worked with the best and now he’s one of them. His role on Maui was to test boards, of course, but also to work with guest testers and help them get the most out of their time on the water.

Our equipment manager, Glenn Fuller isn’t a full-time windsurfer, but his exceptional ability to work with both people and tools made him particularly well qualified to work with testers and to assemble, maintain and measure the equipment.

Fran Dickson, our hostess, is not only charming and unbelievably energetic, but also a remarkably skilled windsurfer and perceptive tester. She had her hands full feeding a dozen hungry windsurfers every day, but somehow managed to out-sail us on the water as well.

Then there’s me, Ken Winner, arguably the most hated person in the windsurfing industry, in part because the manufacturers and distributors seldom like what I have to write about their products. When a review is favorable they don’t think it’s favorable enough, and when a review is tepid or negative, well, they really don’t like that. Even if all I’m doing is reporting what other people think about a product, I’m still the messenger and I’m the one the industry shoots at. In a similar vein, some retailers hate when customers come into the shop with firm ideas about what to buy—ideas they formed after reading a test report—because that makes selling what they, the retailers, want to sell that much harder. Still that’s an inevitable part of product testing. If it doesn’t happen, we’re not doing our job.

Speaking of work, the scene at the Maui test session was so energetic, so fully committed to hard-core, unprotected windsurfing, so windy and so packed with stoked out windsurfers, that just about everyone had a hard time remembering that what we were doing was work. We don’t see that as a bad thing.

THE TEST: Testing boards and sails isn’t like testing jewelry for purity. There’s no lab that can run a board through a battery of computerized tests and stamp it “pure gold”. Our process is necessarily much more subjective. We depend heavily on getting a variety of windsurfers’ opinions on each board and sail and then we try to convey to readers the sense of what the testers had to say.

Itching to be tested: Selected boards pointing to the sea await the courting of a tester. Picking boards and sails in the pit area, as David Watson and Steve Hutchinson will both attest, is sensual experience. But no horsing around for Greg Frye, Al Chinappi and Bill Russell (upper right) who have a range of sails and boards stashed by the waters edge for quick changes. Tester Regina Rode, uh…, rode her horse too.

When tester comments are contradictory, we try to understand the reasons. For example, when two testers ride a board and one says it’s boring while the other says it’s challenging, we look at the skill levels of the riders and see if that can explain the difference of opinion. Likewise, if one tester finds a board fine to jibe while another finds it difficult, the difference can stem from the conditions in which the boards were sailed, the footstraps’ positions, or sailor skill. We consider these factors and try to incorporate the insight they give us into the board review.

In the case of sails, which are often more difficult to judge than boards, we rely a lot simply on whether a tester had a good time with a particular sail. The factors that tend to dominate tester comments are weight, handling, ease of waterstarting, and ease of uphauling. Some consider durability far more important than low weight, while others really key in on power. All these personal preferences go into the mix when we consider ultimately how to present a sail.

UNDERWATER WATCHDOG: Technical Editor Ken Winner checks the load cell sensor that provides a reading for the board’s volume. Such an elaborate test, though costly and time consuming, is the only way to confirm the accuracy of any manufacturer’s specs. In addition, each board is laboriously measured and weighed. See pages summary page for a complete specification table.

We also rely on what is surely the most complete measurement and analysis of boards and sails of any test in the world. We check boards for volume, which some manufacturers only guess at. We also check ding resistance and actual weight. We go even farther to measure not only the usual dimensions like tail, max and nose width, but also tuck, vee, rocker, strap placement and mast step placement on boards. In short, we do as much as possible to get some objective information on the products we test so that we can gain even more insight into the way they perform.

Of course, the measuring and weighing and volume testing we do isn’t the part that people are thinking of when they say they want our jobs, but it’s almost as important as the actual sailing, and it’s actually quite fun. Really. In fact, we’re taking reservations now for guest testers who would be willing to bring their slide rules, calculators and measuring tapes next year.