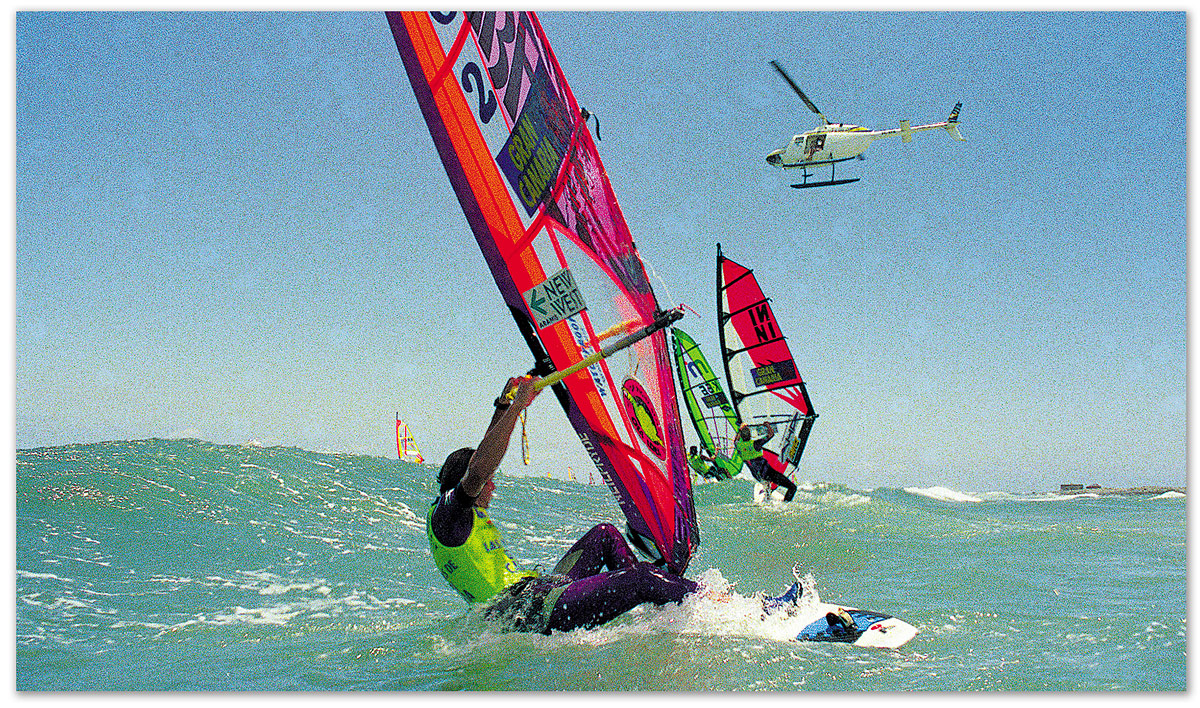 Visual Chronicles of a Spanish Photographer

POZO BEACH CIRCA 1982: Rare vintage photograph of the early days on Gran Canaria. Bjorn and Ugene Dunkerbeck can be seen in the middle of a skippers meeting.

ARCADIO SUAREZ RAMIEREZ grew up on the shores of Gran Canaria with the winds howling against his little fishing village of Arinaga. Arinaga is the first town north of the famous Pozo Beach where the Grand Slam World Cup event is held every year.

As a boy, then a young man, Arcadio loved the ocean but never saw much use for the relentless trade winds that whistle past his home and turn the crystal clear ocean into a raging foaming monster.

At an early age, he found the ocean in front of his house to be a vast playground, delighting in its available pleasures. In time, Arcadio took up the many watersports available then and windsurfing, in those early days of the late ‘70s, was one of them. At last, he discovered a good reason for the ever-blowing wind! But it wasn’t until he snapped his first photograph of a windsurfer that Arcadio Suarez Ramirez came to know that his life would never be the same again. “I was convinced at that time,” claimed Arcadio, “windsurfing was going to be important.” Even more than participating in the beautiful sport riding the wind and water at one with the elements, he enjoyed taking pictures of others doing so. It was an interesting, new adventure for him.

Unforeseen at that point for Arcadio, windsurfing was not the force that was to change his life. Instead, it was his new found passion for photography that quickly took hold of him and gave him the necessary tool to shape his newly born lifestyle.

Unlike other young Canarians growing up on the beaches of the Spanish island, Arcadio’s path crisscrossed with the most dominant windsurfing talent in the history of the sport for the next eighteen years. Indeed, life was changed for him in an exciting way.

“I met Bjorn Dunkerbeck when he was fifteen and I remember someone told me that he was going to be a champion,” recalled Arcadio. “Soon after the young Bjorn came to Pozo Beach with his father for a race. There were some thirty people participating and, to everyone’s surprise, Bjorn won. The organizers and competitors could not believe the results and did not accept that a fifteen-year-old could have beat the older, more experienced competitors. So they canceled the race and started another one. Again Bjorn won and this time, they could not deny the incredible second win. From then on, Bjorn was the best!”

At that point in time, Pozo Izquierdo was a dead town. “You could walk down the street and see no one. But windsurfing changed all that.” Before long, the windy beach became a well-desired destination with its reputation spreading through the not so distant European continent. Today, the once remotely quiet town is at the core of every European sailor’s ambition as the one of the most radical windsurfing locations in the world.

Arcadio was an integral part of this popularized change.

One could argue that Arcadio played a major role in the transformation of Pozo’s beach. After all, he is the most well know photographer on the island as well as one of the most prolific. Without his pictures, would Pozo’s fame have spread so quickly and far?

As the staff photographer of the Canaries Siete Newspaper for the past fourteen years, Arcadio has been the main documentarian for the island and for windsurfing there. While his job provides frequent opportunities to travel abroad, coming home to Pozo has always been a top highlight on his list. “It is important to make pictures of the island,” said Arcadio. “But making pictures of windsurfers was my first love and still is my main passion.” His inspiration remains alive.

As a boy who grew up on the water, it is not surprising to see that Arcadios’ favorite activity is to be in the water catching windsurfing on film. “I feel totally liberated when I’m in the water photographing windsurfers, especially during a competition.”

Eight years ago, Arcadio decided to build his own housing for his camera. Necessity was the mother of his invention as he molded plexiglass around his camera and developed watertight seals. He went back into the water and found a great success. Today, photographers from around the world have ordered the Canarian’s innovative waterproof shell.

As he spends more and more time in the water swimming close and closer to the flying windsurfers, one wonders if he feels threatened by the danger. “No, they are all professionals.” Said the man who is doing what he likes best. “I trust them.”