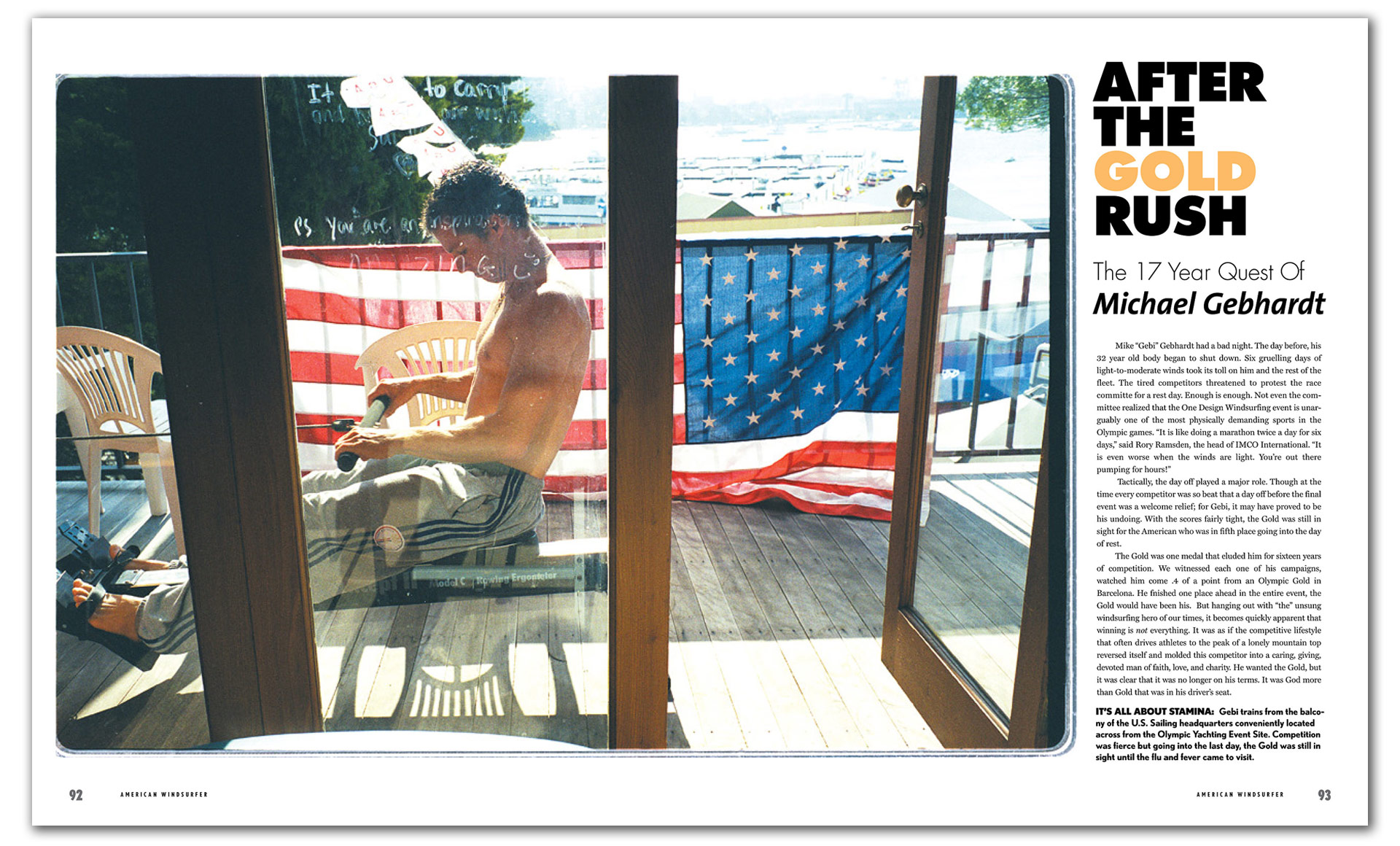 Competition was fierce but going into the last day, the Gold was still in sight until the flu and fever came to visit.

IT’S ALL ABOUT STAMINA:  Gebi trains from the balcony of the U.S. Sailing headquarters conveniently located across from the Olympic Yachting Event Site. Competition was fierce but going into the last day, the Gold was still in sight until the flu and fever came to visit.

MIKE “Gebi” Gebhardt had a bad night. The day before, his 32-year-old body began to shut down. Six grueling days of light-to-moderate winds took its toll on him and the rest of the fleet. The tired competitors threatened to protest the race committee for a rest day. Enough is enough. Not even the committee realized that the One Design Windsurfing event is unarguably one of the most physically demanding sports in the Olympic games. “It is like doing a marathon twice a day for six days,” said Rory Ramsden, the head of IMCO International. “It is even worse when the winds are light. You’re out there pumping for hours!”

Tactically, the day off played a major role. Though at the time every competitor was so beat that a day off before the final event was a welcome relief; for Gebi, it may have proved to be his undoing. With the scores fairly tight, the Gold was still in sight for the American who was in fifth place going into the day of rest.

The Gold was one medal that eluded him for sixteen years of competition. We witnessed each one of his campaigns, watched him come .4 of a point from an Olympic Gold in Barcelona. He finished one place ahead in the entire event, the Gold would have been his.  But hanging out with “the” unsung windsurfing hero of our times, it becomes quickly apparent that winning is not everything. It was as if the competitive lifestyle that often drives athletes to the peak of a lonely mountain top reversed itself and molded this competitor into a caring, giving, devoted man of faith, love, and charity. He wanted the Gold, but it was clear that it was no longer on his terms. It was God more than Gold that was in his driver’s seat.

The day off gave Gebi the opportunity to let his defenses down and somehow he caught the flu bug. A sleepless night followed by a 100˚plus fever clearly took its toll. It did not look good for the American.

On the race course for the last day, Gebi’s performance was clearly compromised. He finished 16th in the first race, a respectable middle of the fleet finish. On the second and last race of the event, with no hopes for a medal, Gebi dropped way back and rounded the windward mark second to last. We watched in sorrow and hoped that he would retire from the race. There was no reason to continue.

There were thirty-six competitors on the water and at one time, Gebi brought up the rear.  Still, he sailed on. He played the windshifts and raced by himself in solitude while the whole fleet sailed far ahead of him. Then slowly things started to happen.

NOT FOR WIMPS: The One Design racing demands Herculean stamina as the prevailing 0-8 knot winds on the course makes it more of a pumping duel than a sailing race. (above) Acupuncturist Bonnie Lambert works on the worn down warrior.

On the second lap of the three lap race, he broke through the ranks and gained some ten places and on the third and final windward mark he passed the bulk of the fleet and was in the teens. For those of us following the red and yellow sail with the American flag and the oversized USA, it was an amazing feat. Every one of us would have retired long ago and found the flu as a reprieve.

To watch this athlete dig deep into his gut and pump his way back to finish a respectable 11th overall was an impressive achievement. To witness what may be the last race of his Olympic career and see the heroics performed out on the frigid water was the highlight of this reporter’s Olympic experience.

Though this Olympian may not have walked away with Gold to add to his Silver and Bronze, he has won a prize far bigger than any medal can achieve. Michael Gebhardt has become a competitor that has found peace, tranquility, grace, and wisdom to keep on moving through the odds as well as the glory; through the good times and the bad.

The complexities and the stories of how the Gold eluded Gebi can be studied and analyzed with long dissertations. In fact we did an interview with Gebi several years ago entitled, “The Transformation of Michael Gebhardt” in Issue 5.2. What set Gebi apart from winning the Gold is simply this:

AT PEACE WITH THE WORLD:  Overlooking Camp Cove at the Sydney Harbor National Park, Gebi ponders a turning point after his 17 year Olympic career. But the cellophane wing that has carried half of Mike Gebhardt’s life, as in this 1990 photograph from Costa Rica, will undoubtably always be the instrument of his excellence.

Michael Gebhardt has learned the intangible game of winning.  To be at peace and to live a life without expectations; to be in the flow with the world around him; to be  attuned to the task of helping others.

There are angels among us whose humanity burdens their delicate wings. They soar happily and forever crash, tethered to their genetic whims. They are gifted, filled with talents, yet compromised by brittle shells of flesh. To hide their flailing flaws, they seek enlightenment, completeness, even divine intervention.

In their seemingly boundless quest, they are transformed and soar far above the average soul. For they have made it a sport to ride this human wave. They have found delight in balancing the shifting forces of their fallen ways.

They are real angels in the making and their burdens are carried upon their cellophane wings.