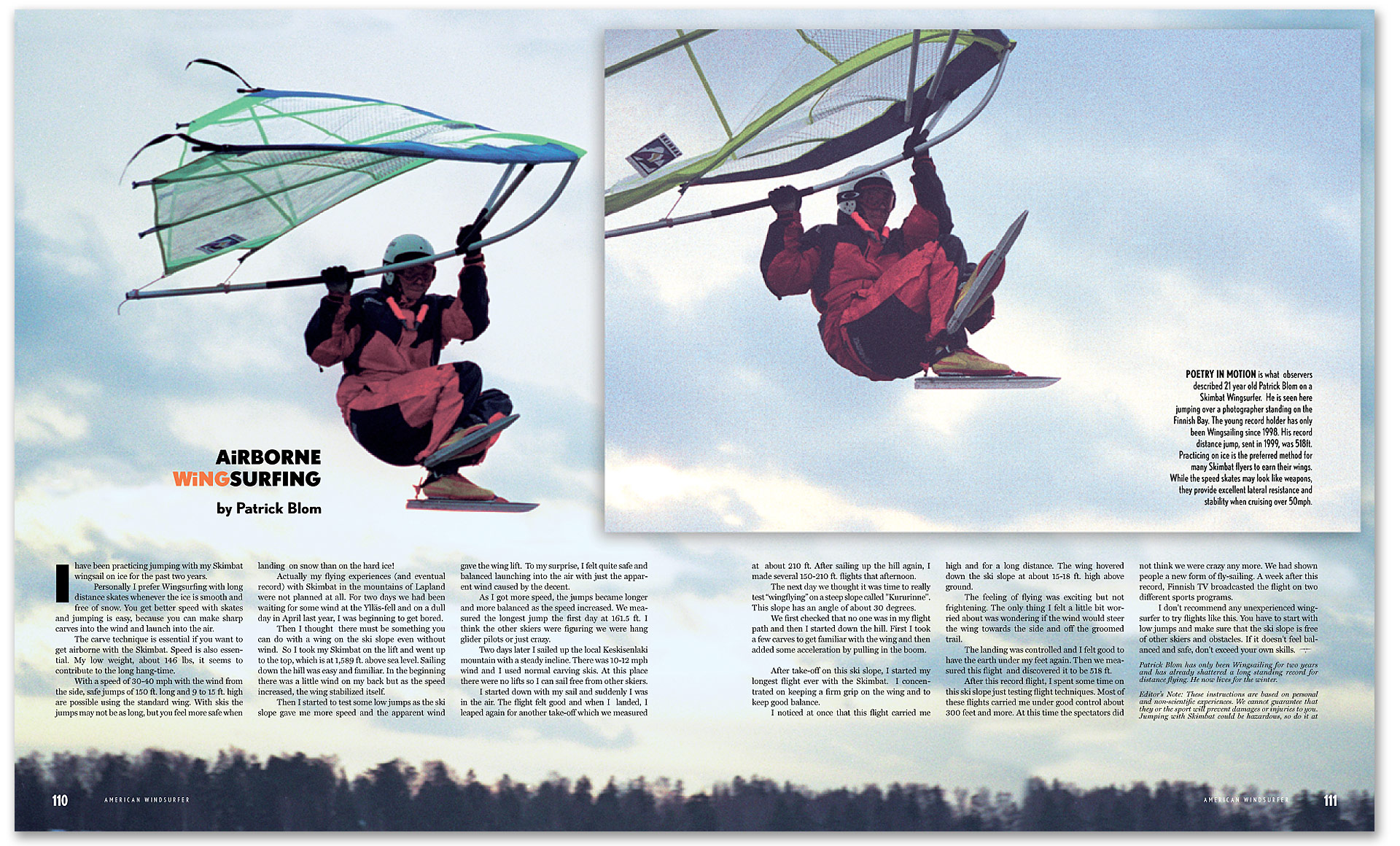 …we measured this flight and discovered it to be 518 ft.

POETRY IN MOTION is what  observers described 21-year-old Patrick Blom on a Skimbat Wingsurfer. He is seen here jumping over a photographer standing on the Finnish Bay. The young record holder has only been Wingsailing since 1998. His record distance jump, sent in 1999, was 518ft. Practicing on ice is the preferred method for many Skimbat flyers to earn their wings.  While the speed skates may look like weapons, they provide excellent lateral resistance and stability when cruising over 50mph.

I have practiced jumping with my Skimbat wingsail on ice for the past two years.

Personally, I prefer Wingsurfing with long-distance skates whenever the ice is smooth and free of snow. You get better speed with skates and jumping is easy, because you can make sharp carves into the wind and launch skyward.

The carve technique is essential if you want to get airborne with the Skimbat. Speed is also essential. My low weight, about 146 lbs, it seems to contribute to the long hang-time.

With a speed of 30-40 mph with the wind from the side, safe jumps of 150 ft. long and 9 to 15 ft. high are possible using the standard wing. With skis the jumps may not be as long, but you feel safer when landing  on snow than on the hard ice!

Actually, my flying experiences (and eventual record) with Skimbat in the mountains of Lapland were not planned at all. For two days we had waited for some wind at the Ylläs-fell and on a dull day in April last year, I was beginning to get bored.

Then I thought  there must be something you can do with a wing on the ski slope even without wind.  So I took my Skimbat on the lift and went up to the top, which is at 1,589 ft. above sea level. Sailing down the hill was easy and familiar. In the beginning, there was a little wind on my back but as the speed increased, the wing stabilized itself.

Then I started to test some low jumps as the ski slope gave me more speed and the apparent wind gave the wing lift.  To my surprise, I felt quite safe and balanced launching into the air with just the apparent wind caused by the decent.

As I got more speed, the jumps became longer  and more balanced as the speed increased. We measured the longest jump the first day at 161.5 ft. I think the other skiers were figuring we were hang glider pilots or just crazy.

Two days later I sailed up the local Keskisenlaki mountain with a steady incline. There was 10-12 mph wind and I used normal carving skis. At this place, there were no lifts so I can sail free from other skiers.

I started down with my sail and suddenly I was in the air. The flight felt good and when I  landed, I leaped again for another take-off which we measured at  about 210 ft. After sailing up the hill again, I made several 150-210 ft. flights that afternoon.

The next day we thought it was time to really test “wingflying” on a steep slope called “Kururinne”. This slope has an angle of about 30 degrees.

We first checked that no one was in my flight path and then I started down the hill. First, I took a few carves to get familiar with the wing and then added some acceleration by pulling in the boom.

After take-off on this ski slope, I started my longest flight ever with the Skimbat.  I concentrated on keeping a firm grip on the wing and to keep a good balance.

I noticed at once that this flight carried me high and for a long distance. The wing hovered down the ski slope at about 15-18 ft. high above ground.

The feeling of flying was exciting but not frightening. The only thing I felt a little bit worried about was wondering if the wind would steer the wing towards the side and off the groomed trail.

The landing was controlled and I felt good to have the earth under my feet again. Then we measured this flight  and discovered it to be 518 ft.

After this record flight, I spent some time on this ski slope just testing flight techniques. Most of these flights carried me under good control about 300 feet and more. At this time, the spectators did not think we were crazy anymore. We had shown people a new form of fly-sailing. A week after this record, Finnish TV broadcasted the flight on two different sports programs.

I don’t recommend any inexperienced wingsurfer to try flights like this. You have to start with low jumps and make sure that the ski slope is free of other skiers and obstacles. If it doesn’t feel balanced and safe, don’t exceed your own skills.

Editor’s Note: These instructions are based on personal  and non-scientific experiences. We cannot guarantee that they or the sport will prevent damages or injuries to you. Jumping with Skimbat could be hazardous, so do it at your own risk.