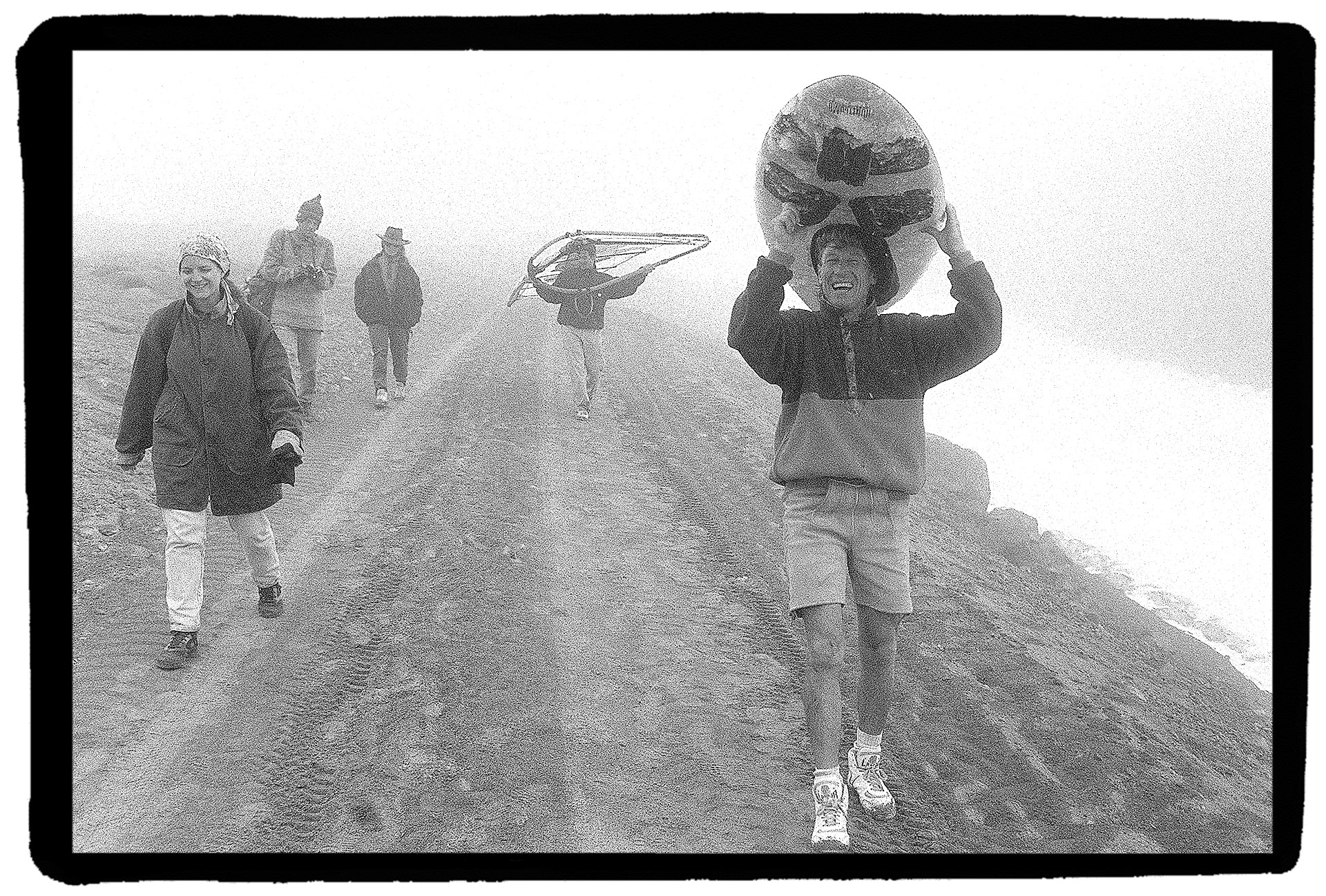 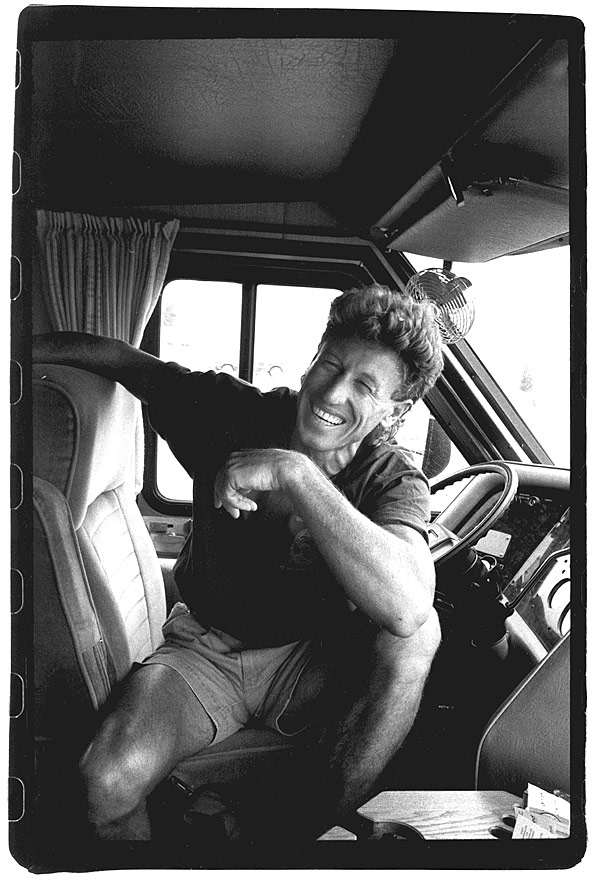 (above) Chummy at the helm of a Holiday Rambler named the SchmuckMobile, Francese cruised in luxury across North and Central America in this ultimate windsurf transportation. “It is a great place to eat cheese.” Followed by his support team, the intrepid windsurfer picks his way up the foggy and treacherous slopes of the dormant volcano.

The rainy and windless summer day in Hood River seemed far away on the foggy slopes of Mount Hood, and Francese was chatting amiably with the Bavarian hikers who didn’t seem to be taking us very seriously. Maybe it was that Francese was wearing a strange hat, but I think the windsurf board he was holding on his head the whole time threw them a little more.

Our group was stretched along the rocky trail to the snowfield, the lifts had closed a while ago, and even though all I had to carry were the booms, I was panting next to the spry 48-year-old as we continued on our journey. I don’t know who came up with this idea, but I thought we were a little underprepared. Sure, we had the foresight to stock up on bread, wine, cheese and some grapes, waiting for our return in the warm confines of Francese’s immense motor home, the SchmuckMobile, but I didn’t expect the board to grab well in the soft snow without something of a fin. Nonetheless, I had confidence that this noble effort would bring the satisfaction of a day well spent.

The Gorge fell away rapidly enough, and the rolling orchards and fog blown stands of pines paraded past the commodious living room window with suitable majesty as Francese regaled us with tales of his baronial upbringing. I admired his style. Stories of almost washing away in the SchmuckMobile during a Texas flood, the Jesuit school of his youth, and the fifty-five-foot birthday present speedboats on the Mediterranean offset tastefully the realistic sculpture of some very intimate pigs under the little oak table between the two front seats.

An aerial acrobat, Francese’s sail displays a six-foot kangaroo with his initials “FDR” and a message, “Fourty Eight, Late, Still Need a Date.” Caught in mid-air a day after the assault on Mount Hood with the same sail that endured the snow-packed rigging.

My numb fingers were almost useless at the controls of my camera as Francese deftly assembled his rig. We were finally on the glacier, and I was regretting leaving the little plywood snowboard where I found it at the lift house, because it looked like this mission would pay off after all. Sure, it was thirty-four degrees and raining, and okay, the board was a little unstable, but I thought it would be fun to slide down and pick up some speed and see what the sail did in the artificial breeze. Unfortunately, the thing spun out beneath Francese before he could really start to rip, but at least he was dressed properly. It’s a firm belief of mine that you can’t go wrong wearing lederhosen.

After we all nodded gravely at the unprofessional oversight of forgetting the fin, we slid our way down to that big lodge at the bottom near the parking lot and leaned the board on a tree to go inside to ogle at the tourists and the fireplace. We were, after all, on official business. 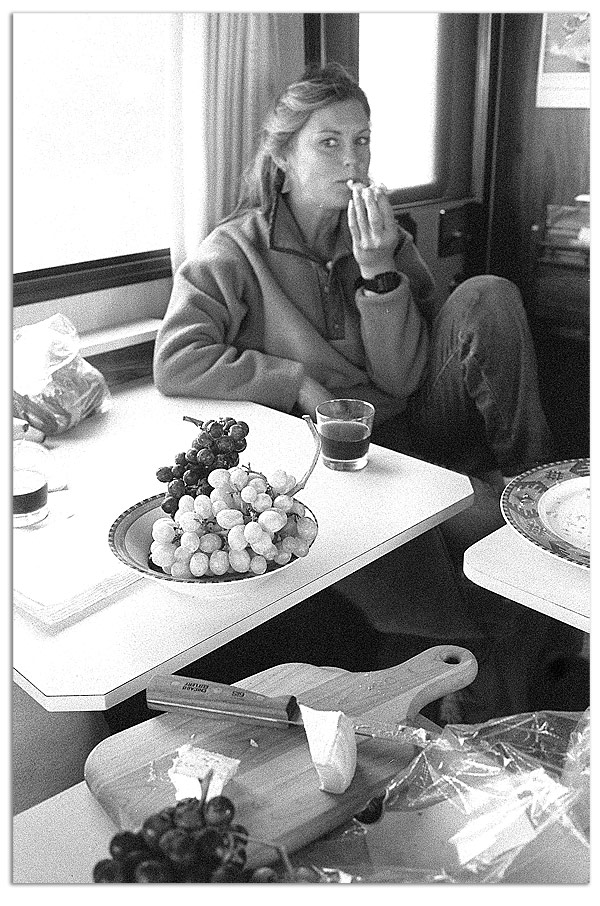 After a frantic search for the restrooms, and some numb stares at nothing in particular, our ragtag party made it back to the SchmuckMobile, holding its own in the rain at the far end of the parking lot. After recording the moment in pictures, we stepped inside for what we all were secretly waiting for: payback. The wine went fast, and although Francese doesn’t drink, I like to think he had a glass with us in celebration. We had to wash down the rest of the bread and cheese with tea and grapes, but that was no chore.

Hot chocolate in hand, kicking back in the loungy swivel chair, I watched the shattered slopes of the old volcano drift by as Francis eased the Schmuckmobile down the mountain. I really didn’t care that I would never have to limit my daughters’ birthday guests to one measly carat of jewelry, or for that matter, that there wasn’t a breath of wind stirring near the town of Hood River.