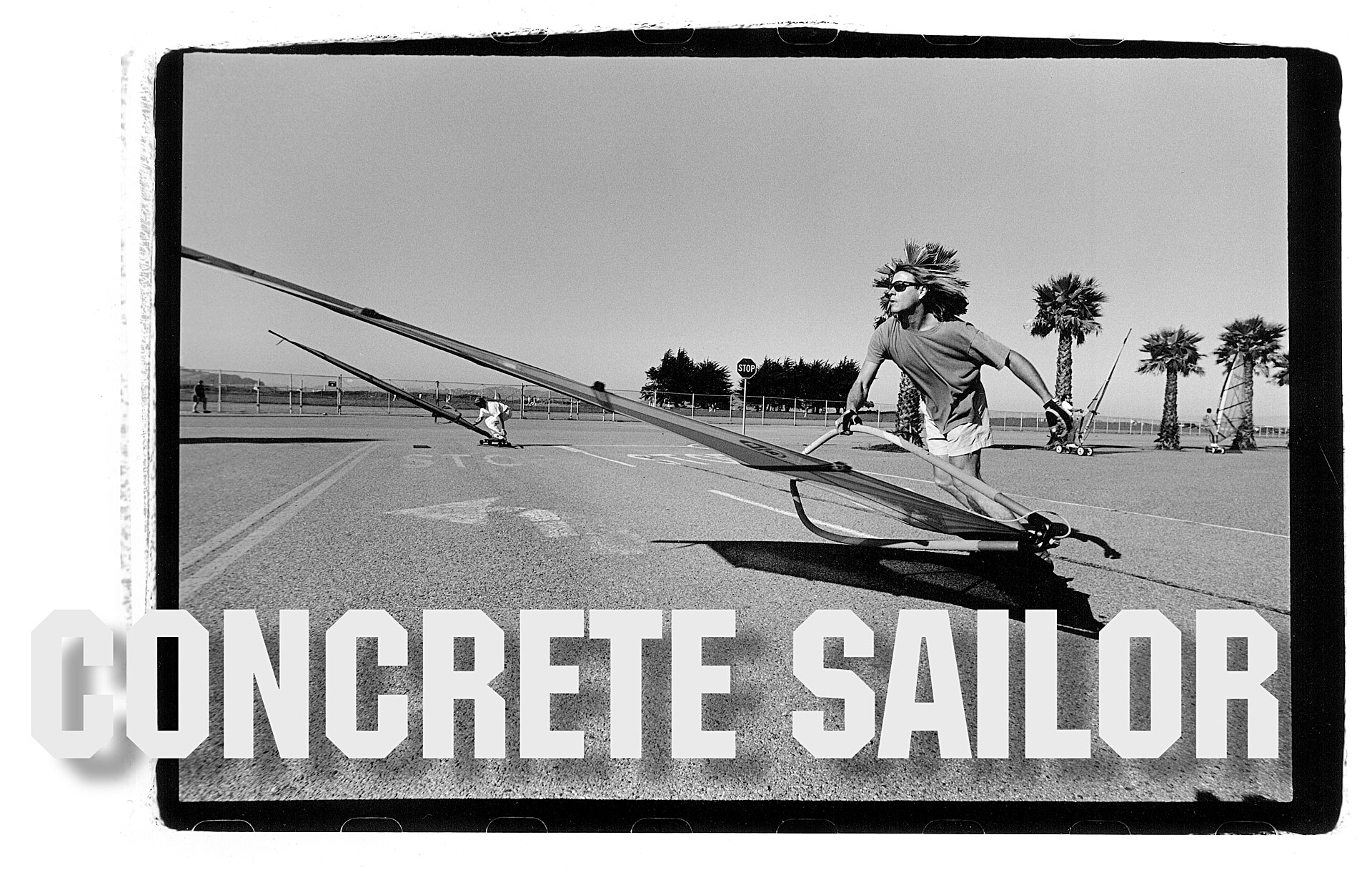 Any windsurfer knows that pavement is thicker than water. And harder. But skate-sailors insist that their sport is only slightly more dangerous than windsurfing and about the same as skateboarding. Though this might not be particularly reassuring for the uninitiated—or for anyone over the age of, say, twelve—but, with gloves to protect the hands, a bicycle helmet, and a little practice jumping off the board before you lose complete control, one can learn to coexist with the pavement factor as calmly as windsurfers deal with the launch factor.

THE REAL NEWS regarding skate-sailing, however, is not that it is a relatively safe sport; it’s that it is a terrific way to improve your windsurfing and have a lot of fun in the process. Perhaps most important of all, unlike it’s sister sport, it’s a breeze to learn.

For the last four years, joggers, dog walkers and beachcombers at Crissy field in San Francisco have been treated to the unusual sight of a group of renegade windsurfers flying around the parking lot on wave sails attached to homemade skateboards. Many take in the sight nonchalantly and move on, accepting it as be yet another aspect of the bizarre landscape of the city by the bay, but some stop to watch the unusual scene, intrigued by the novelty of sailing on land. The sailors speed across the pavement in close proximity, weaving in and out of each other’s way, jibing just inches from each other, taking spills occasionally only to jump right back on their boards and glide away.

The men and women on the odd-looking craft talk and joke with each other as they roll across the parking lot like choreographed dancers in some exotic ballet. As one practitioner has said, “It’s our own little paradise.” Ron Gonzalez, one of the better skate-sailors that sails the Crissy parking lot, puts it this way: “A pack of five of us will come ripping into a jibe all at once, wheels grinding, sails and tourists flying,” he says. “It’s really something to see!”

Gonzalez started skate-sailing with a handful of other windsurfers four seasons ago. They were kicking around for something to do in the wintertime in the Bay Area when the weather was mild though not windy enough to windsurf. They searched the area for adequate locations to practice their sport and ended up right back where they started—at Crissy Field. “We’ve been kicked out of parking lots all over the Bay Area,” Gonzalez says with a laugh.

At Crissy they found the ideal conditions for skatesailing: a flat, relatively smooth surface with a long, open stretch to windward and nothing to block the wind. They also found something else that helps: an audience. “The audience is excellent,” says Gonzalez. “We could probably find another place to sail in some remote place, like the [parking lot at the] Golden Gate Fields racetrack, but then it would just be us. At Crissy you have all the people strolling by. After they’ve seen the Golden Gate Bridge, they’re ready to check us out.”

Gonzalez’s friend and fellow skate-sailor, DJ Campbell adds enthusiastically: “We really draw a crowd. People see the sails moving around from a distance and they’ve never seen anything like it before. We show off for them a little and before you know it, out come the cameras and video-cams. We’re part of people’s scrapbooks all over America.”

Skate-sailing has been around almost as long as windsurfing. Articles were penned on the subject in windsurfing magazines back in the eighties; in Europe, where there are many more participants than in the U.S., there are regular regattas and a championship every year. But here in the U.S., it has never broken out of its quirky role as a fringe sport practiced by a few thrill seekers and oddballs.

“A pack of five of us will come ripping into a jibe all at once, wheels grinding, sails flying. It’s really something to see.”

Lately, however, skate-sailing in the Bay Area has experienced a growth in popularity as the technology has evolved and as the tricks in windsurfing have become more intricate. Windsurfers have discovered they can cross-train on skate-sailers when the winds are too light to shortboard, and that most maneuvers come more quickly on land than on water.

“Some of the toughest maneuvers can be accomplished in a day on land where with windsurfing it would take months, even years,” says Jean Rathle. Rathle is another skate-sailing regular at Crissy, though he did not start there.

He first made one for himself in his garage after reading an article on the subject in a magazine back in 1987. When he moved to San Francisco from Florida to pursue an engineering career in 1991, he skate-sailed by himself until he met the gang at Crissy. Now he can be seen regularly performing on land duck jibes and tacks, 360’s, lay downs, monkey jibes…pretty much anything in a windsurfer’s trick repertoire. “Just about anything you can think of in windsurfing you can do on a skate-sailer,” says Rathle. “Except looping. I haven’t tried that yet.”

To illustrate how easy it is to learn to skate-sail, Rathle recently invited two friends, Brad Pollock and Lauren Blau, to give the sport a try. Neither Brad nor Lauren had ever windsurfed before, but amazingly, both were jibing by the end of the lesson. Helped considerably by having grown up a skateboarder and a surfer in San Diego, Brad even jibed on his first reach! “Because I was familiar with skateboarding, I could concentrate on the wind and the sail, which was totally new for me,” said Brad, explaining his early success. He also added that it got him excited about learning to windsurf. “It’s just a matter of time now.”

“Skate-sailing is not going to solve all your problems,” says Rathle. “But it’s going to help. Because everything happens much slower and the board moves with less friction than a windsurfer, it is easier to control the movements without falling off.”

Though Rathle and Gonzalez talk freely about the pleasures of skate-sailing, the sport has advantages that go beyond learning new tricks and showboating for on-lookers: You can rig up in less than five minutes, it’s cheap, it’s fun, it gives you something to do with your old gear, it keeps your hands and muscles in shape for windsurfing, and it’s got a strong social quotient. The laid-back members of the gang at Crissy don’t exactly exchange presents at Christmas, but they interact freely with the other skate-sailors and welcome any newcomers to there fledgling sport in a way that we haven’t seen in windsurfing since the early days of longboarding. “You can converse easily when you’re skate-sailing and we definitely take advantage of that,” explains Gonzalez. “When you’re windsurfing, about the best you can do is yell—‘Hey!’— as your friends sail by.”

To get started with the sport, Rathle and the other skate-sailors at Crissy recommend that you dig through your garage and pull out your old equipment—the older the better. An RAF wavesail in the 4.0 to 5.0 range is generally the right size. As for the board, you could order one of Rathle’s custom “Street Sailers” (tel: 415-668-9670 or check the web site www.ultranectar.com) if you want the board to be perfect, but just about any skateboard will do the job adequately enough, especially if it is between three and four feet in length. Once you have obtained a board, attach your universal to it by drilling a hole just behind the skateboard truck and fitting the bolt through this.

When you have your rig together, it’s time to focus on safety. Rollerblading or bicycling gloves are a must, though the beginner and anyone sailing in crowded conditions should add a helmet and knee-pads. After this, you are ready to hit the pavement, so to speak.

Skate-sailing requires very little wind—from three to five knots—so pick a level paved area that gets a steady, light wind. The mechanics work exactly the same as with windsurfing so it should come naturally to anyone with prior windsurfing experience, but it’s important to bear in mind two important things. Unlike windsurfing, holding onto the boom until the last possible second is not a good idea. Even in light winds you can get up to 20 mph and, no matter how well protected you are, you want to avoid hard falls at all cost. Practice stepping on and off the board in the beginning, letting your rig fall to leeward well before you have reached Mach speed (That’s why you’re using your beater equipment and not your brand new wave sail and carbon boom.)

THE USUAL SUSPECTS: A tailgate is as likely place as any to find a few resting skate-sailors. Here (left to right) Vesa Suovaniemi, Jean Rathle, John Stuart, Will Triggs and his ever-present canine cohort, Buddy, take a cool drink and have a few laughs. Skate-sailing is the perfect entry to windsurfing, as Jean Rathle directs neophytes Lauren Blau and Brad Pollock through the basics of sail handling.

The second thing to remember is that you can luff and backwind the sail more effectively with skate-sailing to slow your speed and even stop on a dime. Practice this at slow speeds also until you get comfortable. If you spend a little time on these two techniques first you should be able to avoid the hard spills that can break wrists and ankles and send tourists running for cover.

Then, get out and practice all those tricks you’ve seen in the videos and never thought you would be able to do yourself. The tricks come easily when you don’t have to worry as much about board speed and angle and water-starting every time you step off the board. You’ll be surprised at what a good cross-training sport skate-sailing is for learning new maneuvers and keeping you in shape for windsurfing on the water. One last piece of advice: No matter how fast you take to skate-sailing, I’d hold off on looping. At least for the first year. If you can not resist, make sure you have good health insurance and, please, we’d rather not see the photos.

Will Triggs is a windsurfer and writer who has traveled around the world three times and still thinks that  San Francisco is “The Great Good City we all are looking for”.  Photographer Byron Carlisle, is a DJ for Live 105 radio station in the Bay area.