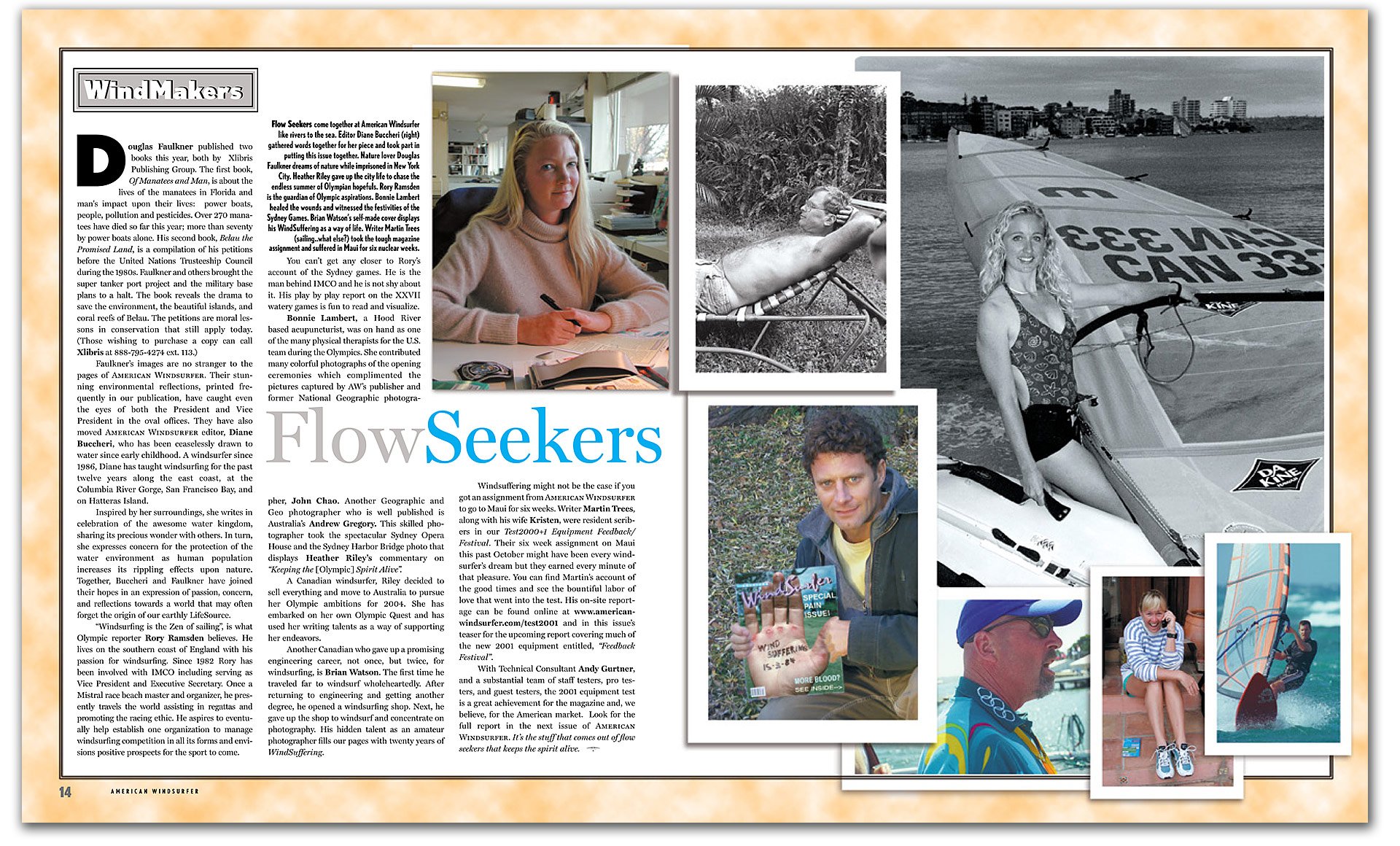 Flow Seekers come together at American Windsurfer like rivers to the sea.

Editor Diane Buccheri (above) gathered words together for her piece and took part in putting this issue together. Nature lover Douglas Faulkner (right) dreams of nature while imprisoned in New York City. Heather Riley gave up the city life to chase the endless summer of Olympian hopefuls. Rory Ramsden is the guardian of Olympic aspirations. Bonnie Lambert healed the wounds and witnessed the festivities of the Sydney Games. Brian Watson’s self-made cover displays his WindSuffering as a way of life. Writer Martin Trees (sailing..what else?) took the tough magazine assignment and suffered in Maui for six nuclear weeks.

Douglas Faulkner published two books this year, both by  Xlibris Publishing Group. The first book, Of Manatees and Man, is about the lives of the manatees in Florida and man’s impact upon their lives:  power boats, people, pollution and pesticides. Over 270 manatees have died so far this year; more than seventy by power boats alone. His second book, Belau the Promised Land, is a compilation of his petitions before the United Nations Trusteeship Council during the 1980s. Faulkner and others brought the super tanker port project and the military base plans to a halt. The book reveals the drama to save the environment, the beautiful islands, and coral reefs of Belau. The petitions are moral lessons in conservation that still apply today. (Those wishing to purchase a copy can call Xlibris at 888-795-4274 ext. 113.)

Faulkner’s images are no stranger to the pages of American Windsurfer. Their stunning environmental reflections, printed frequently in our publication, have caught even the eyes of both the President and Vice President in the oval offices. They have also moved American Windsurfer editor, Diane Buccheri, who has been ceaselessly drawn to water since early childhood. A windsurfer since 1986, Diane has taught windsurfing for the past twelve years along the east coast, at the Columbia River Gorge, San Francisco Bay, and on Hatteras Island.

Inspired by her surroundings, she writes in celebration of the awesome water kingdom, sharing its precious wonder with others. In turn, she expresses concern for the protection of the water environment as human population increases its rippling effects upon nature. Together, Buccheri and Faulkner have joined their hopes in an expression of passion, concern, and reflections towards a world that may often forget the origin of our earthly LifeSource.

“Windsurfing is the Zen of sailing”, is what Olympic reporter Rory Ramsden believes. He lives on the southern coast of England with his passion for windsurfing. Since 1982 Rory has been involved with IMCO including serving as Vice President and Executive Secretary. Once a Mistral race beach master and organizer, he presently travels the world assisting in regattas and promoting the racing ethic. He aspires to eventually help establish one organization to manage windsurfing competition in all its forms and envisions positive prospects for the sport to come.

You can’t get any closer to Rory’s account of the Sydney games. He is the man behind IMCO and he is not shy about it. His play by play report on the XXVII watery games is fun to read and visualize.

Bonnie Lambert, a Hood River based acupuncturist, was on hand as one of the many physical therapists for the U.S. team during the Olympics. She contributed many colorful photographs of the opening ceremonies which complimented the pictures captured by AW’s publisher and former National Geographic photographer, John Chao. Another Geographic and Geo photographer who is well published is Australia’s Andrew Gregory. This skilled photographer took the spectacular Sydney Opera House and the Sydney Harbor Bridge photo that displays Heather Riley’s commentary on “Keeping the [Olympic] Spirit Alive”.

A Canadian windsurfer, Riley decided to sell everything and move to Australia to pursue her Olympic ambitions for 2004. She has embarked on her own Olympic Quest and has used her writing talents as a way of supporting her endeavors.

Another Canadian who gave up a promising engineering career, not once, but twice, for windsurfing, is Brian Watson. The first time he traveled far to windsurf wholeheartedly. After returning to engineering and getting another degree, he opened a windsurfing shop. Next, he gave up the shop to windsurf and concentrate on photography. His hidden talent as an amateur photographer fills our pages with twenty years of WindSuffering.

Windsuffering might not be the case if you got an assignment from American Windsurfer to go to Maui for six weeks. Writer Martin Trees, along with his wife Kristen, were resident scribers in our Test2000+1 Equipment Feedback/Festival. Their six week assignment on Maui this past October might have been every windsurfer’s dream but they earned every minute of that pleasure. You can find Martin’s account of the good times and see the bountiful labor of love that went into the test. His on-site reportage can be found online at www.americanwindsurfer.com/test2001 and in this issue’s teaser for the upcoming report covering much of the new 2001 equipment entitled, “Feedback Festival”.

With Technical Consultant Andy Gurtner, and a substantial team of staff testers, pro testers, and guest testers, the 2001 equipment test is a great achievement for the magazine and, we believe, for the American market.  Look for the full report in the next issue of American Windsurfer. It’s the stuff that comes out of flow seekers that keeps the spirit alive.