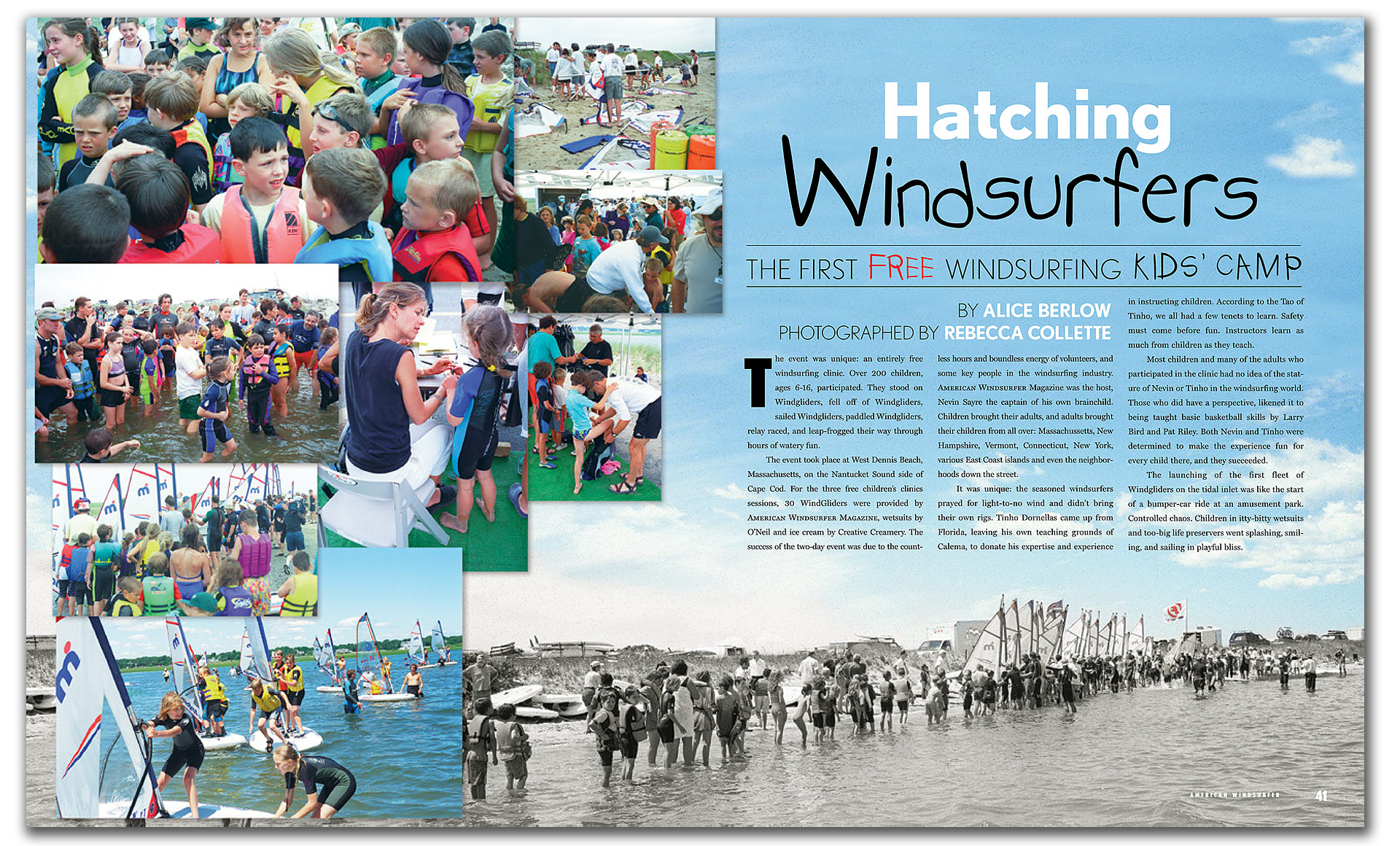 The event was unique: An entirely free windsurfing clinic. 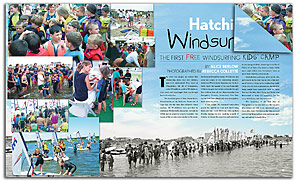 THE EVENT took place at West Dennis Beach, Massachusetts, on the Nantucket Sound side of Cape Cod. For the three free children’s clinics sessions, 30 WindGliders were provided by American Windsurfer Magazine, wetsuits by O’Neil and ice cream by Creative Creamery. The success of the two-day event was due to the countless hours and boundless energy of volunteers, and some key people in the windsurfing industry. American Windsurfer Magazine was the host, Nevin Sayre the captain of his own brainchild. Children brought their adults, and adults brought their children from all over: Massachussetts, New Hampshire, Vermont, Connecticut, New York, various East Coast islands and even the neighborhoods down the street.

It was unique: the seasoned windsurfers prayed for light-to-no wind and didn’t bring their own rigs. Tinho Dornellas came up from Florida, leaving his own teaching grounds of Calema, to donate his expertise and experience in instructing children. According to the Tao of Tinho, we all had a few tenets to learn. Safety must come before fun. Instructors learn as much from children as they teach.

Most children and many of the adults who participated in the clinic had no idea of the stature of Nevin or Tinho in the windsurfing world. Those who did have a perspective, likened it to being taught basic basketball skills by Larry Bird and Pat Riley. Both Nevin and Tinho were determined to make the experience fun for every child there, and they succeeded.

The launching of the first fleet of Windgliders on the tidal inlet was like the start of a bumper-car ride at an amusement park. Controlled chaos. Children in itty-bitty wetsuits and too-big life preservers went splashing, smiling, and sailing in playful bliss. Adult volunteer instructors were off and running in knee-deep water, in that posture so familiar to windsurf instructors: arms raised like cormorants trying to dry their wings, knees pumping like a water bird with a belly full of fish, trying to take off. These Guardians of the Flock lunged through the muck, trying to catch and control their charges, squawking advice.

Some coaches hopped on for a ride, the WindGlider generously abiding instructor and student alike. The event was strategically planned to keep the children moving. A wise move. Tinho’s instructional whistle blows had the exactitude of school bells and the authority of a camp counselor. During breaks, the hatchling sailors were forced to come out of the water. Shivering and teeth chattering, they were greeted by their parents on the beach with towels and accolades. It was clear there were some precocious windsurfers. They didn’t want to stop. One seven-year-old informed her instructor she was overpowered and couldn’t sheet-in her 2.2-meter sail.

Sunday was a gentler day, as the sun came out and the wind relaxed. Nevin and Tinho were also more relaxed, having one successful day and 100 happy young sailors under their harnesses. And with less wind, the volunteer instructors were decidedly less distracted, stealing their own moments on the Windgliders when they had the chance.

The hatchlings officially graduated after each session. They received a certificate, a Dakine Hat, T-shirt (designed by Stina Sayre, Nevin’s wife) and ice cream. Previously strangers, it was clear that the adults and
children were now bonded by memories and stories to be told of their first taste of windsurfing.

After the final round of de-rigging, and  after the last of the T-shirts had been autographed, a few of the remaining parents and volunteers sat on the beach eating leftover ice cream. They watched as fiddler crabs peered out of their grassy hiding places to reclaim their salt water pond, each territorially wagging its one large claw. How and why did this free kid’s clinic happen? “Because it needed to be done,” replied Nevin Sayre, simply.

At bedtime that night, my hatchling son managed a few words before falling off to sleep, exhausted. “Mom, can we go windsurfing tomorrow?” “Yes, baby, we will.”

Thanks to: WindGlider, Fiber-spar, O’Neill, the Town of West Dennis, Creative Creamery, Cape Cod Windsurfing Association, American Windsurfer, Nevin, Stina and Tinho, and all the volunteers who helped.