The TransAtlantic Windsurf Race is an historical journey in the making for both sailors and the sport. 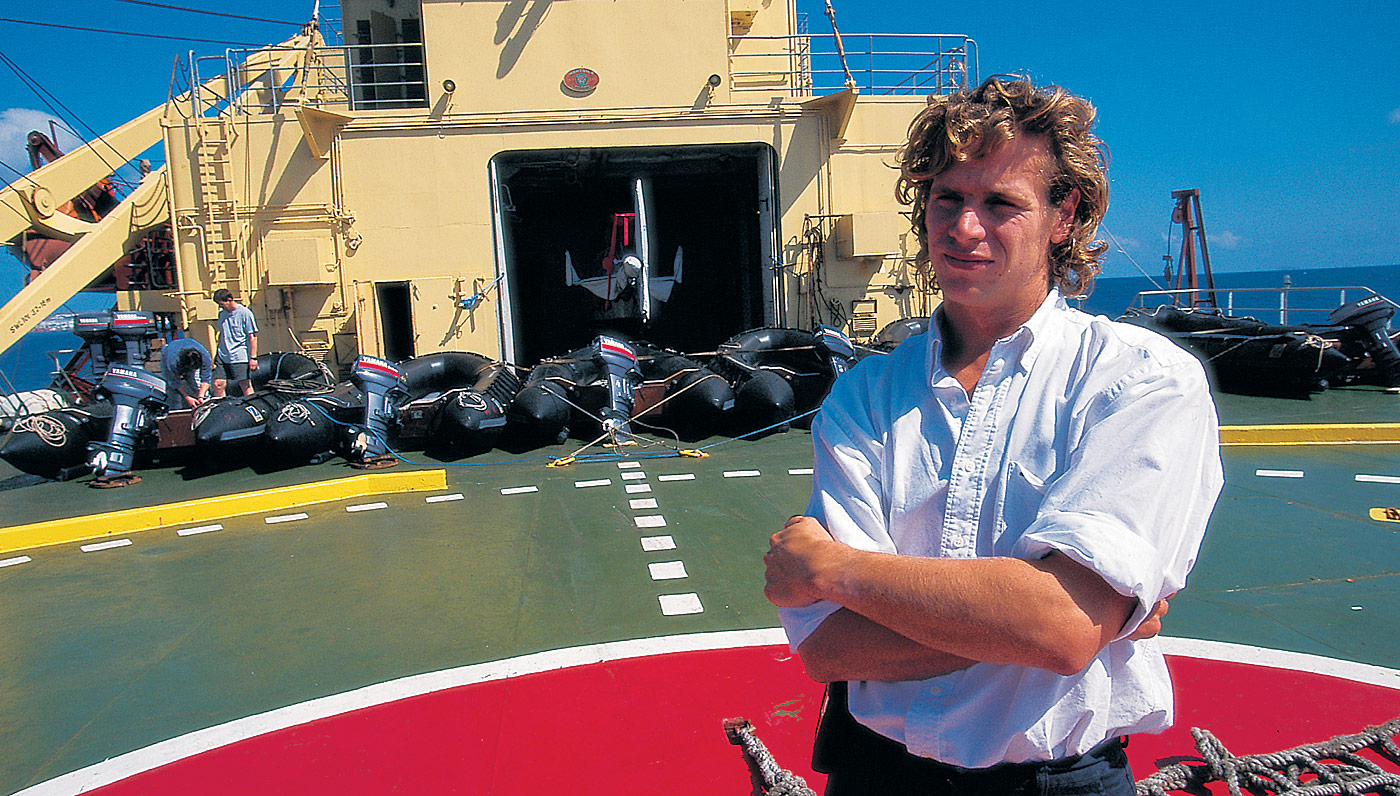 A RACE ACROSS THE ATLANTIC: The brain child of Louie Hubbard, Tour Manager of the PWA, seen here on the helicopter pad and the bridge of the Kapitan Khlebnikov. The Russian ice breaker will serve as the mother ship to 120 racers and holiday participants in the TransAtlantic Windsurf Race.

JUST WHEN YOU THOUGHT it was safe to go back in the water, someone comes up with an idea that blows you away. Try this one on for size. In September of this year, there’s going to be a windsurfing race from New York City to England. Yes, a bunch of professional windsurfers crossing 2,900 miles of the Atlantic—farther than any windsurfing race has gone before.

Teams of two from ten countries, comprised of the world’s top windsurfers, have accepted the challenge. The TransAtlantic Windsurf Race (TAWR) is an historical journey in the making for both sailors and the sport.

Imagine the physical challenge of pitting one’s tiring body against 11 days of the unpredictable and unforgiving forces of nature — gale force winds, killer waves or just nothing at all. Imagine the psychological demands on sailors, with their fears and ambitions. The logistics are mind-boggling—imagine the complexity of such an innovative race. It all can be traced to the British head of Louie Hubbard.

Hubbard travels the world as the Professional Windsurfing Association’s tour manager, but this idea of a Cross Atlantic Race has been pestering him for a long time. So three years ago, he single–handedly formed a core group of investors that helped him launch his vision. Originally slated for 1997, the group discovered that the logistical challenges of coordinating the various elements were far greater than anticipated and wisely postponed the event.

Aside from changing the dates to September of 1998, the launch of the event was also changed from Newfound-land to New York City, adding  1,000 extra miles to the race that ends in  Penzance, England .

This winter, Hubbard enlisted the interest of American Windsurfer publisher John Chao and they met in New York. The result was a firm go-ahead for the event and a beach party with a spectacular new twist.

The idea that jelled between Hubbard and Chao was to bring the French indoor windsurfing pool to New York and erect it on the flight deck of the USS Intrepid, a WWII aircraft carrier serving as a museum parked on the Hudson River side of Manhattan.

As this issue goes to press, the crossing is a sure thing but whether the pool makes it across the Atlantic was not guaranteed. According to Hubbard, “It’s 99% sure that we will have an American splash in the pool and with it, four evening shows with one live telecast beamed to the world!”

With the pool in place on the deck of the Intrepid, the organizers plan to have the biggest beach party, music festival and race launch ever seen in the Big Apple. From September 7 to 13 on Pier 86, right next to the Intrepid Museum, the racers will have their final tune-up and the media will have their up-close and personal look at the cast and characters.

Whether the indoor pool and its 25 electric powered fans make it to this shore or not, the certainty of the greatest windsurfing race/adventure of all times is clearly starting to make waves. What a race it will be!  What an epic adventure!

But wait! There is more.

To protect vulnerable racers from  the dangers of 60 mph winds and 40 or 50 foot waves, a technical support team has been drawn from the best of the Whitbread Round the World Yacht Race, the Virgin Atlantic Crossing and the America’s Cup. They are being assembled to ensure that the race can overcome everything the Atlantic Ocean generates between  September 10 and 20.

An enormous mother ship will play a key role in the event. The Kapitan Khlebnikov is a Russian icebreaker that has successfully crossed the Atlantic for 15 years and hosted hundreds of ecotourists into the Arctic Circle through some of the harshest conditions known to man. The Khlebnikov has been pressed into service by the TAWR organizers to serve as the control center—the base for weather information, satellite hookups, plus as a unique filming platform with two Puma helicopters for live footage and 10 high speed military tracking craft to follow the sailors as they chart their way across the Atlantic.

Additionally the Khlebnikov will serve as a floating luxury hotel for racers and the 60 lucky windsurfers who have signed on to follow the race, partying across the Atlantic as holiday participants.

American Windsurfer will be on board to cover this historical event. This race offers a universal story: men exposed to the savage forces of nature; men torn three ways, struggling against their own fatigue and fear, against the clock, and against their opponents. Ten teams—national teams—will carry the hopes of their nations, battling each other to take home a new World Record.

From the earliest days, men have been drawn to the challenge of the ocean—to break the barriers of endurance, speed and discovery. The TransAtlantic Windsurf Race is one of the world’s last epic races. This magazine’s only acceptable response to such a challenge has to be superlative.