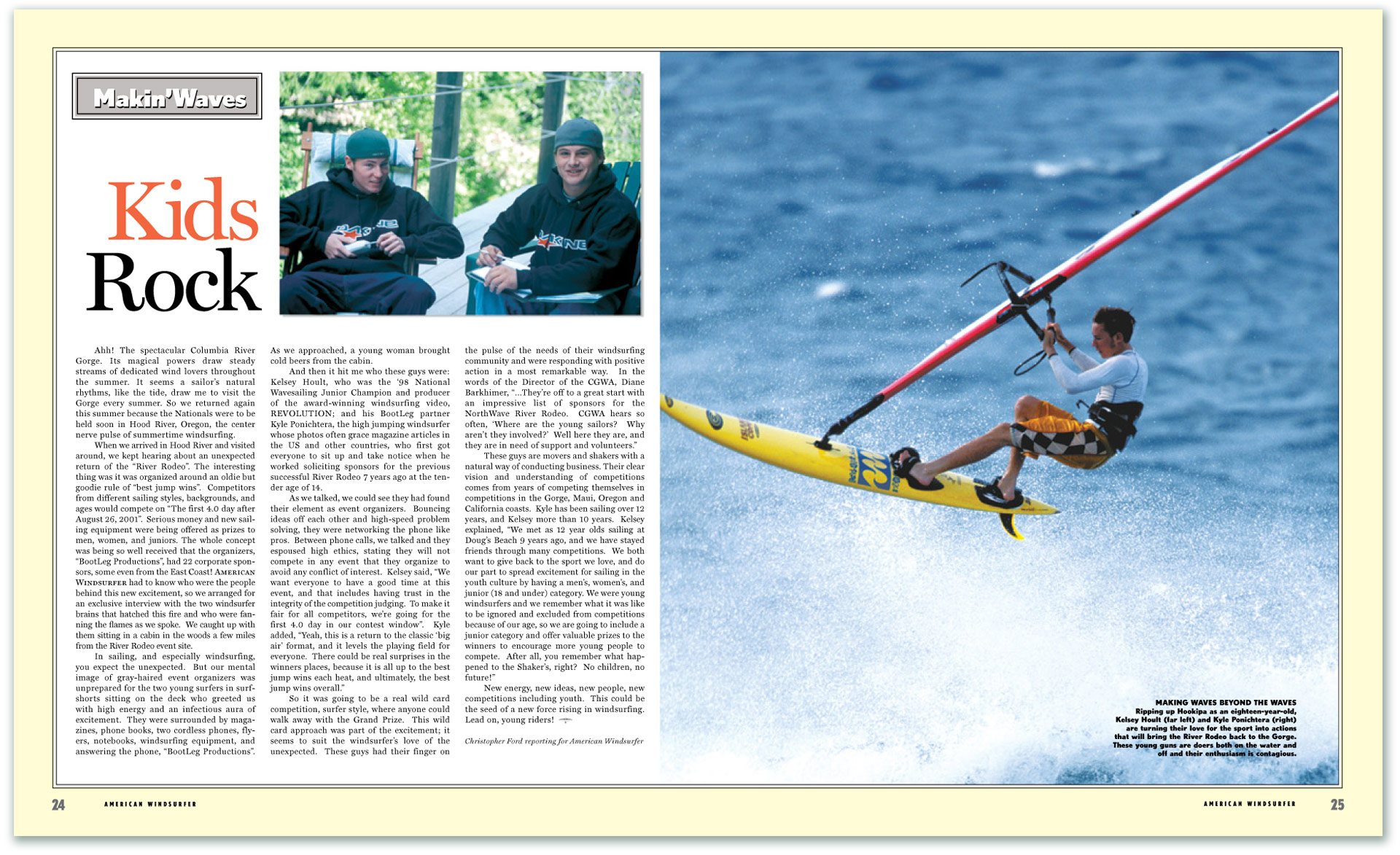 No children, no future!”

MAKING WAVES, BEYOND THE WAVES: Ripping up Hookipa as an eighteen-year-old, Kelsey Hoult (far left) and Kyle Ponichtera (right) are turning their love for the sport into actions that will bring the River Rodeo back to the Gorge. These young guns are doers both on the water and off and their enthusiasm is contagious.

AHH! The spectacular Columbia River Gorge. Its magical powers draw steady streams of dedicated wind lovers throughout the summer. It seems a sailor’s natural rhythms, like the tide, draw me to visit the Gorge every summer. So we returned again this summer because the Nationals were to be held soon in Hood River, Oregon, the center nerve pulse of summertime windsurfing.

When we arrived in Hood River and visited around, we kept hearing about an unexpected return of the “River Rodeo”. The interesting thing was it was organized around an oldie but goodie rule of “best jump wins”.

Competitors from different sailing styles, backgrounds, and ages would compete on “The first 4.0 day after August 26, 2001”. Serious money and new sailing equipment were being offered as prizes to men, women, and juniors. The whole concept was being so well received that the organizers, “BootLeg Productions”, had 22 corporate sponsors, some even from the East Coast! American Windsurfer had to know who were the people behind this new excitement, so we arranged for an exclusive interview with the two windsurfer brains that hatched this fire and who were fanning the flames as we spoke. We caught up with them sitting in a cabin in the woods a few miles from the River Rodeo event site.

In sailing, and especially windsurfing, you expect the unexpected. But our mental image of gray-haired event organizers was unprepared for the two young surfers in surf-shorts sitting on the deck who greeted us with high energy and an infectious aura of excitement. They were surrounded by magazines, phone books, two cordless phones, flyers, notebooks, windsurfing equipment, and answering the phone, “BootLeg Productions”. As we approached, a young woman brought cold beers from the cabin.

And then it hit me who these guys were: Kelsey Hoult, who was the ‘98 National Wavesailing Junior Champion and producer of the award-winning windsurfing video, REVOLUTION; and his BootLeg partner Kyle Ponichtera, the high jumping windsurfer whose photos often grace magazine articles in the US and other countries, who first got everyone to sit up and take notice when he worked soliciting sponsors for the previous successful River Rodeo 7 years ago at the tender age of 14.

As we talked, we could see they had found their element as event organizers. Bouncing ideas off each other and high-speed problem solving, they were networking the phone like pros. Between phone calls, we talked and they espoused high ethics, stating they will not compete in any event that they organize to avoid any conflict of interest. Kelsey said, “We want everyone to have a good time at this event, and that includes having trust in the integrity of the competition judging. To make it fair for all competitors, we’re going for the first 4.0 day in our contest window”. Kyle added, “Yeah, this is a return to the classic ‘big air’ format, and it levels the playing field for everyone. There could be real surprises in the winners places, because it is all up to the best jump wins each heat, and ultimately, the best jump wins overall.”

So it was going to be a real wild card competition, surfer style, where anyone could walk away with the Grand Prize. This wild card approach was part of the excitement; it seems to suit the windsurfer’s love of the unexpected. These guys had their finger on the pulse of the needs of their windsurfing community and were responding with positive action in a most remarkable way. In the words of the Director of the CGWA, Diane Barkhimer, “…They’re off to a great start with an impressive list of sponsors for the NorthWave River Rodeo. CGWA hears so often, ‘Where are the young sailors? Why aren’t they involved?’ Well here they are, and they are in need of support and volunteers.”

These guys are movers and shakers with a natural way of conducting business. Their clear vision and understanding of competitions comes from years of competing themselves in competitions in the Gorge, Maui, Oregon and California coasts. Kyle has been sailing over 12 years, and Kelsey more than 10 years. Kelsey explained, “We met as 12 year olds sailing at Doug’s Beach 9 years ago, and we have stayed friends through many competitions. We both want to give back to the sport we love, and do our part to spread excitement for sailing in the youth culture by having a men’s, women’s, and junior (18 and under) category. We were young windsurfers and we remember what it was like to be ignored and excluded from competitions because of our age, so we are going to include a junior category and offer valuable prizes to the winners to encourage more young people to compete. After all, you remember what happened to the Shaker’s, right? No children, no future!”

New energy, new ideas, new people, new competitions including youth. This could be the seed of a new force rising in windsurfing. Lead on, young riders!