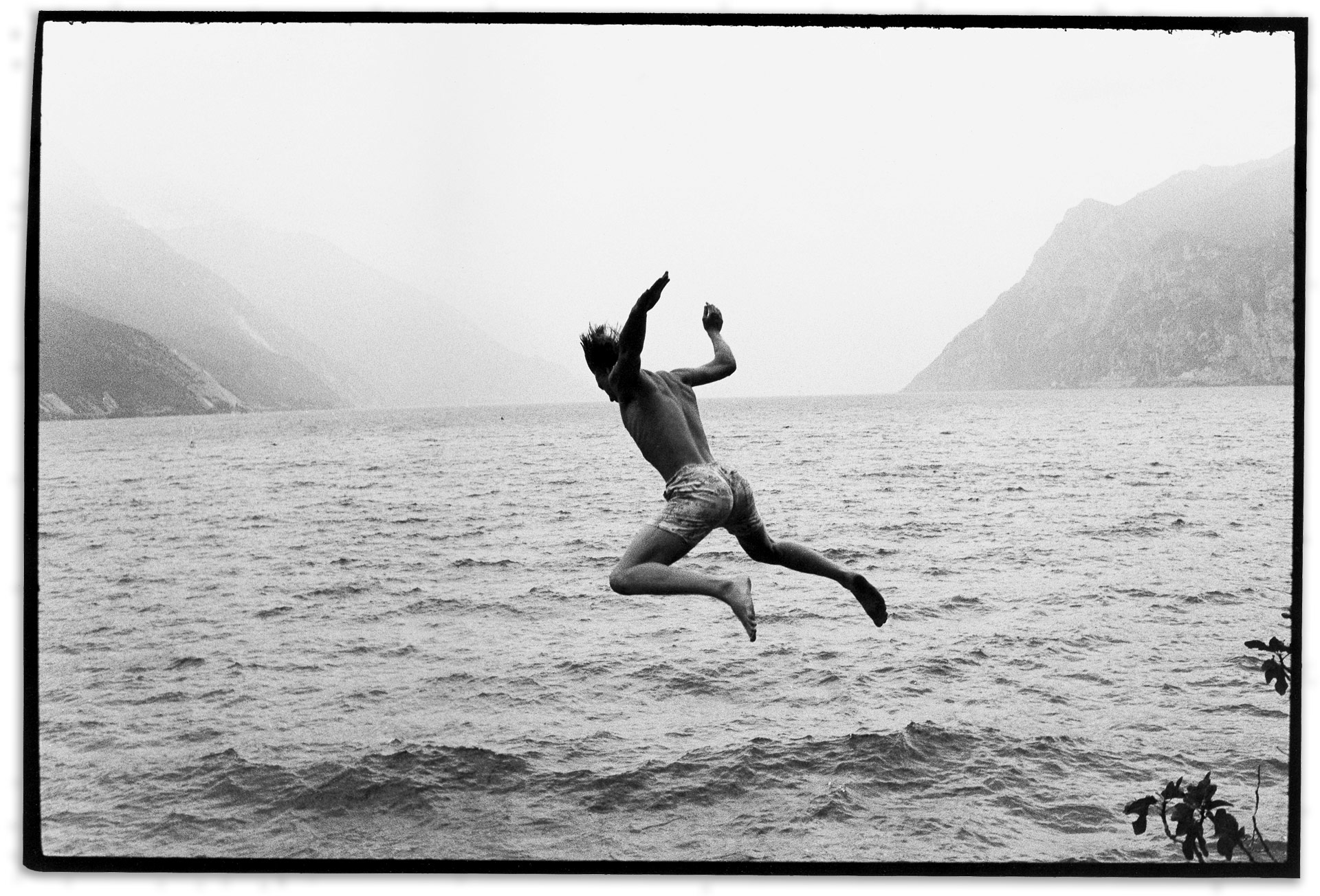 The Spawning Ground of European Windsurfing

SUSPENDED IN FLIGHT:  A young Italian diver leaps from the granite cliffs between the towns of Riva and Torbole. The two scenic hamlets border the windy northern end of Lake Garda and play host to hundreds of thousands of wind seekers throughout Europe. Centrally located, this lake is the most talked-about windsurfing destination-playground on the European continent.

VASCO RENNA was born and raised in a small fishing village on the shores of Lake Garda in Northern Italy.

“I remember when I was a little boy,” he says in a rhythmic Italian accent.

“The tour buses would bring the old people and they would sit on the beaches until 1:00 pm.  Then, the wind would blow them back to their hotel rooms and they would say, ‘Torbole Bad! We will never come back!’”

SAILS AS FAR AS THE EYES CAN SEE:  On a windless day, thousands of windsurfers still pepper the placid surface of Lake Garda. A refreshing sight indicative of the growth of windsurfing in Europe. Beginners and a predominantly large group of “cruisers” fill the lake on this Sunday morning. The six schools along the northern shore of the lake pump out about 4,000 students a year… per school.

TODAY VASCO RENNA owns a windsurfing concession on the very same beach that the old folks sat, and Torbole, along with her sister town of Riva, is not so bad anymore. The two towns that harbor the northern corner of the lake are considered the mecca and spawning ground of European windsurfing.

The retired folks still come [in droves now] and their oversized buses always manage to plug up the many tight tunnels on the Gardesana road along the cliffs near the two towns. They come to watch the spectacle of 4,000 windsurfers sailing on an average day on Lake Garda. “It makes them feel young!” says Vasco Renna. “And many have taken up the sport themselves.”

For windsurfers in Europe, Lake Garda is more than just a sailing destination. It is a place where European windsurfing finds its definition, character, and most importantly, public image. Unlike the radical conditions of the Gorge or Maui, which seem to define the sport for American sailors, the gentler and more predictable conditions at Lake Garda have contributed much to the popularity and success of the sport in Europe. The message from Lake Garda is social, recreational and educational.

As a pilgrim from the U.S., one quick and immediate observation I made while making the two-hour drive from Munich, Germany through Austria and into Italy is how basic, almost primitive, yet acceptable was the equipment strapped on top of the Mercedes and BMWs flying to and from the lake. After all, we in the U.S. have always heard about the immense popularity windsurfing enjoys in Europe, and myself included, expected to encounter cutting-edge technology in your basic European practitioner.

In my mind, the source of influence in Europe can be traced to Lake Garda. It is strategically located in the heart of Europe. Nestled like an upside-down funnel in the foothills of the Bavarian Alps, the lake is convenient and  accessible to weekend sailors from Germany, Austria, France, and, of course, Italy. What’s more, the geographical and geological make-up of the lake provide windsurfers with a predictable living, breathing wind machine — exhaling in the morning and inhaling in the afternoon.

NO COMPLAINTS ABOUT THIS WHALE: Contentment with antiquated equipment is a way of life. Boards are handed down from beginners to beginners. Long boards rule the lake and clunkers sit sprightly on top of sparkling $150,000 dollar cars and their invigoratingly, sexy, occupants.

THIS IS HOW IT WORKS. Early each morning, high up above the majestic layers of the savage alpine peaks that steeply surround the northern shores of the lake, cold crisp, night air awakens as the sun warms the surface of the lake. Like a hanged man whose time has come, the trap door opens and the cold air falls helplessly, tumbling down the rugged mountains towards the early risers at 25 knots.

As the day grows, the same majestic granite mountains that  gave the morning rush are cooked by the sun to a temperature higher than the cool waters below. Then a total reversal takes place and the cold air literally falls skyward, seeking equilibrium and pressure gradient harmony creating a south wind called the “ORA.” A miraculous super-charged cycle–—the mountains exhale in the morning and then inhale in the afternoon.

To sail at Lake Garda is quite simple. There is wind in the morning and in the afternoon. Any other time, don’t bother. It is regimented. In fact, you can plan your day around the wind, and when you’re not sailing, you won’t think, “Gee, am I missing it?!” This civilized, well-mannered, predictable wind behavior is much appreciated by visiting sailors. It’s a refreshing essence discovered at Lake Garda.

Windsurfing at Lake Garda is also sailing in the spectacle of nature’s raw grandeur along with, and immersed in the culture, a sense of history, place, and charm. Everywhere you look. On top cliffs, in city squares, farmer’s fields and water’s edge, are remnants of castles, fortresses, many restored, maintained, always lived in. The streets and roads are lined with cypress, olive, fig and laurel trees, giving the place a submediterranean air and one of a Biblical presence… Looking up at the rugged hills, one often feels that Jesus is coming down to say “Ciao.”

Wind Like Clockwork: Afternoon winds in the summer can be measured by looking at your watch. Long-time residents of Lake Garda like Michiel Bouwmeester can predict wind conditions without even looking at the water. His years of experience have parlayed into a successful school and rental location on the Western cliffs of the Lake.

WITHOUT A DOUBT, the most remarkable windsurfing experience at Lake Garda is getting off the water after a morning session and sitting at one of the thousand little sidewalk cafes where you can take in the extraordinary Italian ambiance. Returning to the lake around 1:30 p.m., you can watch the Ora come sweeping in like a freight train over the placid turquoise water. On the beach, the international language of “frenzy” takes place as hundreds of windsurfers scurry frantically to get their equipment together so that every ounce of wind is enjoyed. It is incredible how fast these windsurfers get out on the water. Within a minute of the Ora’s arrival, the lake is filled with streaking windsurfers leaving jet-like trails on the relatively flat water. No current here and no radical swells. In fact, you can have 25 knots of wind and no chop at all.

I had heard about the “Ora Express.” On a hot summer’s day, when the conditions are right, you can see it coming. If you’re properly prepared, you can catch it and ride it like a huge wave—a wall of wind rumbling through the valley—skyrocketing you, the windsurfer, across the startled waters.

I waited, feeling a little stupid. The lake looked dead, completely flat and devoid of life. The air was still, bland and blatantly bored. “A good time to take a nap,” I thought.  But then in the distance, just as I was told, I saw a dark line forming. It came quickly and I got a sense that everything movable around me was bracing itself for a thrashing.

I stood on my borrowed F2 Sputnik and North 6.0 and pumped myself towards the approaching wall of energy. Difficult at first, as the air was so still, it was hard to fan any substance when the sail was pumped. Suddenly the wind took hold. Instant acceleration! My heart felt the rush of adrenaline. From zero to nirvana in no time flat.

I watched for the wind line and bore off, chasing the wind’s cutting edge. Not a ripple in front of me. I was floating on a magic ride. No bumps, no jumps, just a steady roar of the wind and the splashing slicing sound of my board displacing the placid lake.

I had never been here before, and it was magnificent.

Abundance of Old and New: Streets around Torbole and Riva are lined with reminders of space–age technology while throughout the country side, cresting over hills, are remnants of an age gone by. As evidenced by the discovery of a prehistoric mummy frozen in the peaks beyond the Arco Castle, this fertile valley has seen the signs of humanity since the Stone Age.

THE BAD THING ABOUT Lake Garda, basically about Italy, is that the shops tend to suck up your freshly exchanged liras. Which, by the way, takes a little getting used to. “What? The hotel bill came to be over one million liras?” exclaimed an American tourist from Annapolis. “Let’s see… one dollar equals 1,600 liras…”

“Lake Garda is quite inexpensive for Americans because of the favorable exchange rate” prompts Michiel Bouwmeester, the owner of the Funboard Center at the hotel Pier. Bouwmeester came to Lake Garda some 16 years ago and set up the first instructional school on the lake. He also took the windiest location on the west bank, where sheer granite cliffs straight down to the water prevent any other competition. His center has become somewhat of an “in” spot for some “class” conscious Euro-sailors. The Hotel Pier, though spartan in comparison to other luxurious abodes, is nevertheless a place of status and the place to be “seen.”

Right across the neck of the lake, in a direct sailing tack from the Hotel Pier, is the Hotel Villabella (beautiful village), the epitome of luxury and Italian charm. Not a school, the hotel sits right by the water’s edge and provides the most stunning sight of the magnificent lake.

Other schools and concessions have opened up but are all delegated to the northern end of the lake. All major board companies have their centers there and provide impressive services to beginners and intermediate sailors. On a visit to these centers, one comes to understand why windsurfing is so popular in Europe. The centers are all geared to beginners and intermediate sailors. Luca Perazzolli of the Windsurf Center readily admits “this is where the lira grows.” Each center also coexists with a windsurfing club whose members get parking and storage privileges for a substantial sum of money.

“We teach about 4,000 beginning students a year.” says Vasco Renna, owner of the Fanatic/ART “Surf Center”, right next to the Mistral 3S center, next to the Bic Windsurf Center and the Tiga/Neil Pryde Conca D’Oro Center is just down the road. All of them are in palatial abandoned city buildings on the waters edge of Torbole/Riva with idyllic rigging gardens and public beaches.

To handle the sheer number of windsurfers who come to Lake Garda, the centers have evolved a system that can handle the crowd with surprising ease and efficiency. There are absolutely no sails laying on the ground. Every rigged sail has an upright parking stall very much like a bicycle rack. The complete rack swivels with the wind and when the wind comes, the rigged sails are quickly accessed and released to the eager sailors. First-time visitors are always amazed how rapidly the lake is filled to the brim with windsurfing sails.

More to the point, the first time visitor is amazed how in every wind condition they find eager and willing practitioners to savor the moment. Even when the Gardisian ducks zoom past them like the Mercedes passing 60mph faster than my own (110mph) breakneck pace down the German Autobahn. Somehow the message of Lake Garda has flown effectively throughout its European concrete veins. (Perhaps a little slower than 170mph)

Like white caps covering the surface of a wind-blown sea, the sails at Lake Garda give a good barometer of the conditions and in this instance, the health of windsurfing in Europe.