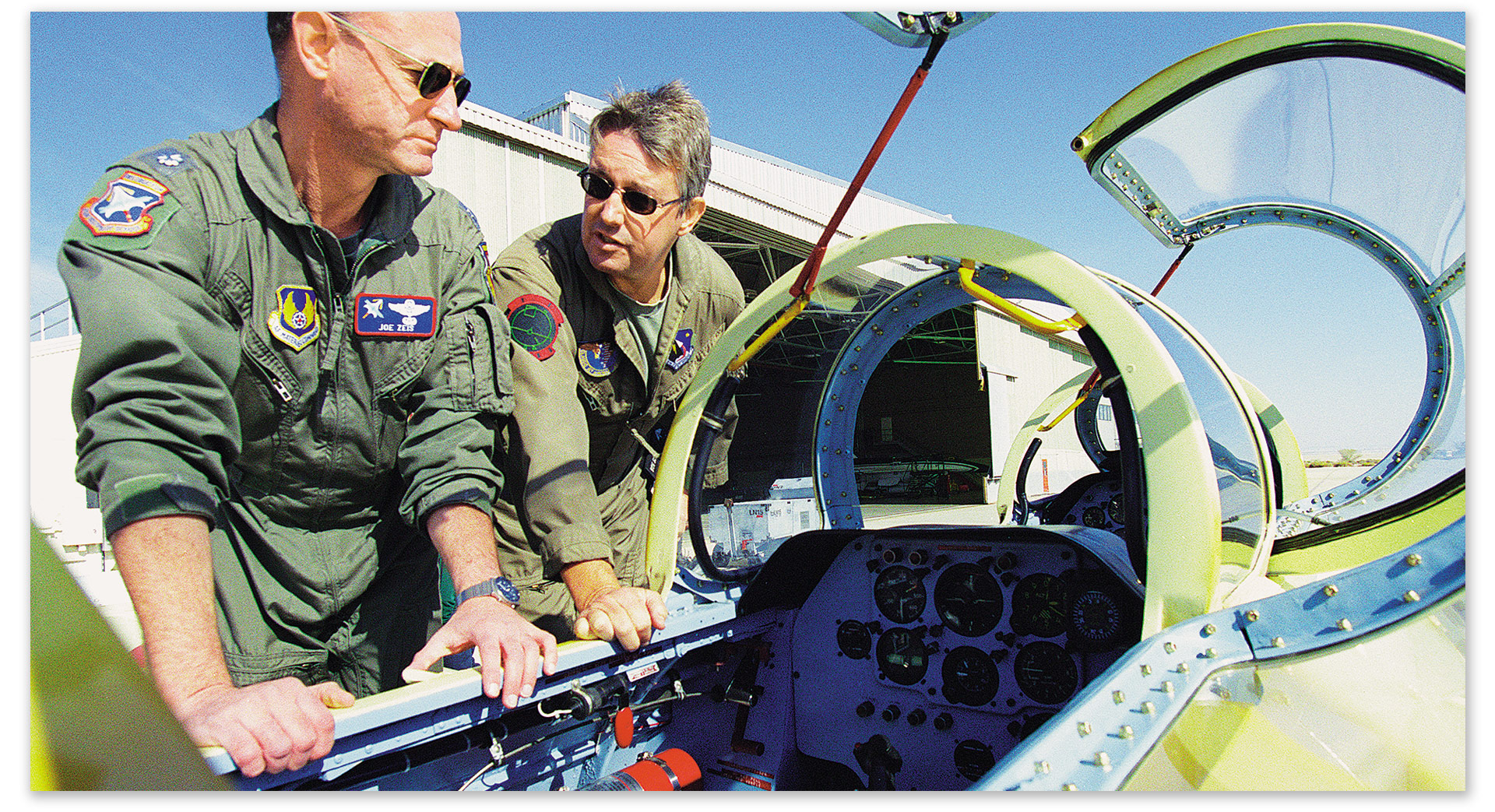 It’s not every day that you get permission to hang out with guys with the “Real Stuff”.

EVERY MEN’S DREAM JOB: It’s not every day that you get permission to hang out with guys with the “Real Stuff”. We caught up with Lieutenant Colonel Joe Zeis, the Deputy Commandant of the Air Force Test Pilot School at Edwards Air Force Base in California. Each year, under his wings, the best aviators in the world are selected to come to the high desert for a forty-eight week test pilot training program. From here those with the “right stuff” follow the heritage of Chuck Yeager and General Joe Angle into aviation and space exploration history.

Lieutenant Colonel Joe Zeis: I’ve been here at the test pilot school for eighteen months in this position. I’ve actually been involved in tests since 1987 when I graduated from the Air Force test pilot school. Upon graduation I went to work for the F-15 Strike Eagle program for about three years then I went over to the B-2 program for about a year and a half. I’ve worked various programs at Wright Patterson Air Nautical System Center.

What we do here is train two classes of students a year. Each class is forty-eight weeks long with twenty-five students per class, typically divided half pilot, and half navigators and engineers. I am a flight test navigator. We give them Masters level academics in theoretical air nautical engineering. Then what they do here at the school is walk out to the various aircraft in the curriculum—that includes the F-16, T-38, and the Casa jet. They go out and apply theory to a real aircraft. They then evaluate those aircraft, developing, number one: their skill in various flight test techniques, and number two: (most importantly) their powers of observation.

When students come here they are experienced aviators in their own right. They have been flying the line of the Air Force for eight to nine years. What we want them to be able to do is not just take the airplanes off, but also fly them effectively and land. They need to be able to describe in detail and report on what they did, how the airplane felt, and their impressions of the aircraft because it’s not until we actually report on the data from the flight that we have truly done our mission. It’s one thing to go up and perform a spin, recover the plane and land. It’s a totally different thing to go up and describe the aircraft in, for example, a spin. Was it susceptible? Was it not susceptible to spin? Was the spin upright? Was it inverted? They have to be able to bring back and report those types of descriptors, modifiers, and impressions accurately. In terms of testing it’s their job to bring back observations. So we’re developing not necessarily the golden arm but the golden eye, keen powers of observation, and the ability to report on those observations in flight.

AW: What happens with the students after they finish the course?

JZ: After their forty-eight weeks here they will go to one of the combined test forces either here at Edwards or Egglong Air Force Base in Florida. Typically they will be in a two to three year initial assignment as a test pilot, flight test engineer, or test navigator. Then they will usually go on to a second assignment in leadership in the test community after which they will go on to program management. Finally they will come back into more senior leadership roles such as flight test squadron commander or test ops group commander. Once they are in test they typically stay in that type of track for their careers.

AW: What’s the philosophy of a test pilot?

JZ: Typically you think of a test pilot as a guy with a scarf walking out to a jet. He flies it, comes back and says, “That was really cool.” In reality what a test pilot does is build up, in a very scientific and controlled manner, to explore the points of the envelope that haven’t been explored yet, to open up the envelope for the operational community. That is done in a very controlled manner in a build up type of approach. You are never just going out and busting through to see how fast and far it will go. You are always building up from a known level to the next step, to the next step, and so on. It’s done in a very technically sound manner with proper engineering consultation. It’s done in a very safe manner; there’s always a safety review process.
AW: There’s a lot of heritage here isn’t there?

JZ: Frankly the heritage of Edwards is one of its greatest assets. So much has happened here. You look out over the lakebed and think about breaking the sound barrier for the first time, all the X series planes, the Century series fighters that were tested out here in the golden days of flight testing. To a degree the Golden Age is coming back. If you look on this ramp you just saw a B-2 fly in a closed pattern. The F-22 is right next door. The Joint Strike Fighter is right next door to that. The CV-22 is next door to that. The F-15e with all of its advanced systems is right down the street from that. The F-16 with all of it’s various blocks, the avionics blocks that have turned that airplane into a tremendous fighting machine, is right down the street from there.

Here we are at the test pilot school, preparing folks to do that. I remember sitting here looking out my window at the entire heritage. You can see NASA down that end and the Space Shuttle going by. If you go over there, there’s a little known pit on south base where the X-1 was loaded onto the B-29 before the super-sonic flight. All of these little things are tremendous assets. We bring in Chuck Yeager every six months to a year. He has kindly donated his time to speak to our students to provide that link back to their heritage. Every time it’s absolutely phenomenal to see and hear him.

General Joe Angle is our professor emeritus, the youngest astronaut to gain his wings by flying into space in the X-15 program, and the only man to manually re-fly an aerospace vehicle from orbit to landing here at Edwards with the space shuttle. He is a superb gentleman and will be the guest speaker at graduation in December. Heritage is an important, critical part of what we do here. You learn from the mistakes of the past. You learn from all of the reports and observations from the test pilots and test crews of the previous generations so as not to repeat those mistakes. We build on their knowledge so we can step off in a new direction. Heritage is vital not only in terms of motivation and morale, but in terms of technical confidence.

A QUIVER OF PLANES: Lieutenant Colonel Joe Zeis with Bill Russell before riding the Casa. Above, the many planes that he has worked on, and below, the control tower at Edwards overseeing the talents.

AW: Can you tell me what makes a good test pilot?

JZ: As I said before, a good test pilot is a good stick [pilot]. Before they even come here they have eight to nine years of operational experience. They have been flying the line of the Air Force which has been in action effectively since Desert Storm. Most of our student test pilots will come from combat units who have been in action to some degree and have the highest academic qualifications. They have engineering degrees, usually with undergraduate GPAs of 3.3, and graduate GPAs of 3.6, typically. All of our engineers will have Masters degrees. The test pilots come with very good flight skills. What we do here is refine those skills into the particular flight techniques that are applicable to testing the latest generation airplanes. But the key element that we look for as well as their powers of observation is their adaptability to different conditions. It’s not enough to be the F-16 expert or the C-130 expert. You have to be able to adapt to a variety of different airplanes that you’ll fly here and in flight tests. We want to make sure that before we invest time, money, and flight time that they understand and are capable of adapting to the flight test environment. Their powers of observation, though, are the most critical. Like I said earlier, you want to see someone who has a keen eye, the golden eye versus the golden arm, ’cause they will all come to us with a golden arm.