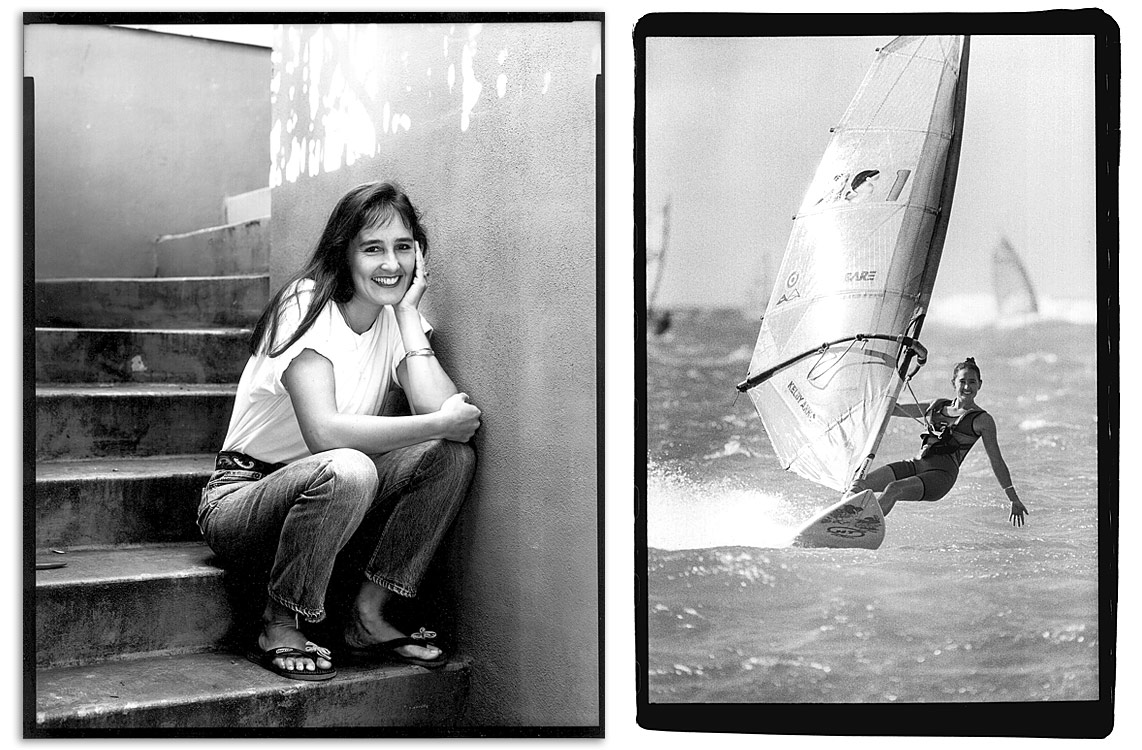 When you think of windsurfing girls back in the eighties,  you think of Kelby Anno. Her pictures can be found in every windsurfing magazine as well as Playboy (clothed)and the cover of LIFE magazine. She was the wholesome image of the windsurfing lifestyle and the sport grew with and around her.

Today at the age of 32, she is married, lives in Maui and still windsurfs. She shared with us a little of her past and of her new life, reborn into a world that goes beyond windsurfing.

AMERICAN WINDSURFER:   You got into windsurfing quite early, in the infant stages of the sport, didn’t you?

KELBY ANNO:  Yeah, with Matt Switzer. (Son of Hoyle Switzer, one of the inventors of the sport). I dated Matt for eight years. I met him when I was 15 and we started dating when I was 16. His parents taught me how to windsurf. Their whole life was windsurfing. We would go to all the contests with Matt and then we moved to Hawaii. That was when footstraps were coming out. Then we broke up. He is still a great friend of mine, he and his wife. His son is my godson, his son Matty. Oh I’ll show you a picture! [Gets up and brings the picture.] This is Matty.

AW: You are a devout Christian now and have gone on several missionary trips and you frequently go to high schools to speak about your faith. Tell me how that came about.

KA: I’ve always had a consciousness of God, even when I was like six or seven years old.  I remember when I was really young,  I wanted to be friends with certain people.  I was really young, kindergarten, first grade and stuff and I always prayed: “God, let me be friends with that person,” and He would always bring that person around. So I saw His action, I saw His hand early.

Then when I was seventeen, my grandmother, who is a real devout Christian, and I were in this small town in Texas and we went to this Christmas Eve service or something, and the pastor was preaching and I was not listening at all. I could’ve cared less. But I remember when he said “If anybody wants to give their life to Jesus right now, stand up and come up here.” I heard that and it hit me, like Whoosh! It hit me like truth hits you in the face.

I wanted to get up but I didn’t, and I looked at my grandmother and she looked at me and said “go on up there” and I just had this fear of man and I didn’t want to.  I just sat and said “I didn’t want to go.” So that day she called over this youth pastor to talk to me and he came over and we sat in the back room where I just cried my head off, for like an hour or two, and I accepted that day.

Three years after that, I went back to LA. and I got sucked right into the world. I didn’t even remember my experience of accepting Christ into my life. I didn’t get involved in a church. I thought nobody could understand what I had gone through. I didn’t think there were Christians in L.A.  I thought I was the only one. Three years later this friend of mine who I have been kind of doing really bad things with for a long time… I grew up in a really… not a rough part of town, but with lots of drugs and alcohol. When I was thirteen or fourteen I was into trying drugs, I was into trying anything. I was into going to parties, getting dropped off or picked up at two in the morning. You know what I’m saying? I was really wild. Not as wild as some, but to the point where I was… always had this kinda’ boundary, you know, but I was still delving into things.

This girl that I had been hanging around, she moved away and she came back and I saw her and she called me and asked to come up and visit me. She had this grin on her face. She looked beautiful, something had happened to her. And she said  “I’ve given my life to the Lord.” At that moment I remembered the experience I had previously and that day I gave my life to the Lord again. It still took me like three more years, cause I moved over here (Maui) with Matt Switzer and I still lived with him and was not going to church.

I’m convinced that the Lord used windsurfing, and he used the situation for good. I got involved with a church and the pastor was a windsurfer and so, like his people, like his friends and elders at the church were all windsurfers. They asked me to come into fellowship with them. About a year later I decided that God wanted me to move out from Matt’s and get my own place and then everything really opened up. It’s like the flood gate of heaven opened up on me when I made the decision to walk with Him and not to live in sin.

AW:  What year was this?

So anyway, that year I moved out. I got my own place. I don’t know how I even made money to live. It was like I had no job, nothing. Then I got sponsored by Windsurfer (the original maker and brand name), and they started paying me every month and everything started happening. You know, I got contracts here and there. I can’t remember all my sponsors then but I’ve been through all of them. But anyway, month by month, God had just started providing, and my windsurfing got better. I won a contest that I’d never thought I’d win. Then from 1983 to 1987 I won the Aloha Classic, so it was like five years straight of just going for it. That was neat, it was the best decision I’ve ever made.

AW:  So you continued in the Christian faith?

KA:  Yeah, from like, leaving Matt; I don’t want to say leave, but when I got on my own and I got alone with God, when we started a Bible Study at my house in the mornings, that was before the church [Island Hope] was ever raised, that was way before Craig [Maisonville] was ever saved, I mean, he was still on the beach eating loaves of bread and just… he was not anywhere near God, cause I really don’t remember even talking to him much when he was in the world. I talked to him, but he was never somebody you could have a decent conversation with… you know what I’m saying? He was real surface.

WALL FILLED WITH MEMORIES: Kelby Anno followed her inner voice to windsurfing and to Maui. It was a step that provided her with a “platform” to visit high schools today and speak and sing about her faith in God and the greater meaning of life.

AW:  Can you describe how  God used windsurfing in your life?

KA:  I look back and I often ask “How did I ever get there?” It is kinda’ like the horse and the cart. I’m in the cart and God is the horse and He is driving me to all these places and I’m just going “Whoa!” Here I’m doing all these things in life, and you don’t realize where you’ve been until it stops. I look back and realize that God has given me this platform (windsurfing). He has blessed my career and I see everything to glorify God.  I believe He has designed this niche for me and that everybody has a calling and uniqueness to their life. I’ve traveled extensively to different countries and now I have a desire to go and sing my songs to the nations cause I sing and write a lot of music now.

It’s like windsurfing has given me credibility, an open door; there is this platform to work from. The world wants a platform so God said “Well if they want a platform then I’ll give them a platform” you know what I mean… “and I’ll use whoever is available to do it.”  I’ve always been pretty available to do His work, to do whatever He wants me to do. It is like listening and seeing what He is doing already, and joining in with Him instead of devising my own plans and objectives.

AW:  Did God lead you away from windsurfing?

KA:  Yeah… definitely, I really knew that I’d achieved all my goals at Ho’okipa, that I didn’t really have the desire to be number one there anymore. It was just like losing something very quickly. I think God had taken me to the escalation point, that He had built the platform already. I knew my feelings were changing. I didn’t really want to be at the beach every day, there were other things happening, I started short  mission trips and so… There was a point that I got so depressed going there and I used to just love it. So I knew that was coming from the Lord but I couldn’t understand it. I mean there’d be some days that I would come home and I’d be just crying and like, say “this is over!”…you know what I mean. Not that He doesn’t want me involved and active in peoples’ lives but He had done what He wanted to do there and from that point He’s going to work off what He had already built up. See the foundation? He had already built the foundation, He wanted me to work off the fat now and I wanted sit there and still get more.

And so now I’m  working off the foundation. You see, when I go speak at a high school, it’s like “Kelby, the Windsurfing Speaker!”

AW:  What do you think of windsurfing now?

KA:  I still love to windsurf and I really love all the people in it. It’s just that there is so much more that God is doing in my life. It is not that I am pulling away, it’s like I’m expanding… you know what I’m saying? [laughs] What I do now is to go to different countries and work with people that don’t have any money and kids that really appreciate life, and people who really want to hear the Gospel of Jesus Christ.

In America we have so much that we get lost in materialism and you don’t even realize you’re lost until you get away and you see how simple life should be. I went to the Philippines on my first mission trip and I worked with kids and God really showed me that this is what matters, that they need to hear the truth, considering what’s going on out there. I look at windsurfing and everything going on there, but if you look at the big picture of the world and life and everything that is going on, it is very easy to see that He is ready to come any time now. I don’t want to be on a two-foot wave worrying about my camber-induced sail when the King comes in the clouds. [laughing] You know what I’m saying? [laughs]

I think it’s great to do all these things, it’s great to be a hot windsurfer, a hot designer or the sharpest shaper or whatever you like…[laughs] it’s great, but you gotta realize the King is coming and not  get wrapped up in the little things—the minors, you know, cause there is so much more.