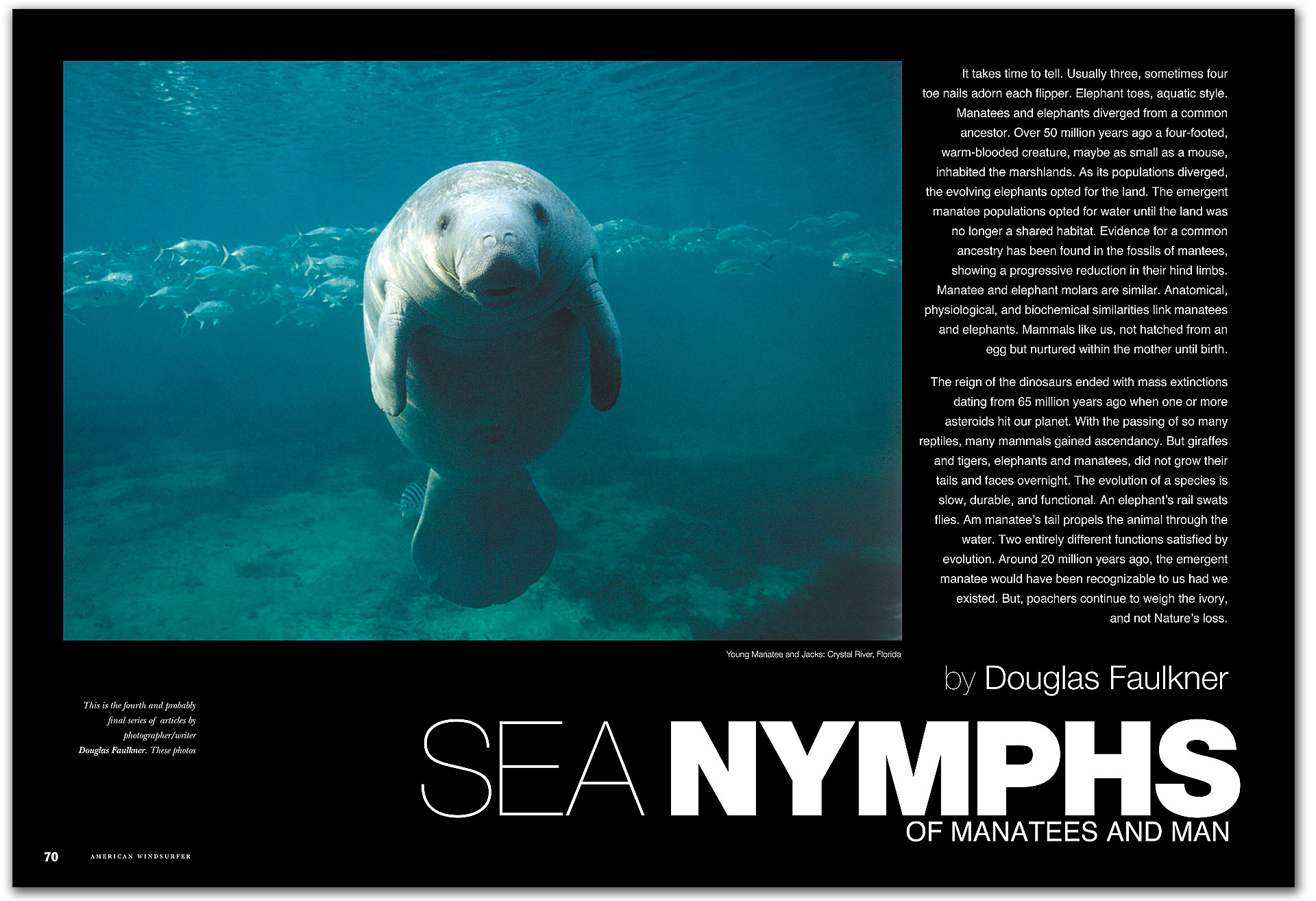 This is the fourth in the series of  articles contributed by photographer/poet Douglas Faulkner. The poetic muses of Faulkner’s work leave us with memories of an underwater world of gentle giants. Hints of their presence are often sighted as we windsurf across the surface of the ocean. The once crystal clear waters of this Manatee heaven, not far away from our Florida test center, has been lost forever.

In the 10 years since capturing these precious photographs, the impact of our human ways has left murky marks beneath the surface of our unseen world.

IT TAKE TIME TO TELL. Usually, three, sometimes four toenails adorn each flipper. Elephant toes, aquatic style. Manatees and elephants diverged from a common ancestor. Over 50 million years ago a four-footed, warm-blooded creature, maybe as small as a mouse, inhabited the marshlands. As its populations diverged, the evolving elephants opted for the land. The emergent manatee populations opted for water until the land was no longer a shared habitat. Evidence for a common ancestry has been found in the fossils of manatees, showing a progressive reduction in their hind limbs.

Manatee and elephant molars are similar. Anatomical, physiological, and biochemical similarities link manatees and elephants. Mammals like us, not hatched from an egg but nurtured within the mother until birth.

The reign of the dinosaurs ended with mass extinctions dating from 65 million years ago when one or more asteroids hit our planet. With the passing of so many reptiles, many mammals gained ascendancy. But giraffes and tigers, elephants and manatees, did not grow their tails and faces overnight. The evolution of a species is slow, durable, and functional. An elephant’s rail swats flies. Am manatee’s tail propels the animal through the water. Two entirely different  functions satisfied by evolution. Around 20 million years ago, the emergent manatee would have been recognizable to us had we existed. But, poachers continue to weigh the ivory, and not Nature’s loss.

The recorded history of the West Indian Manatee is only known from a few widely scattered observations over the centuries. Most of what we know of the manatees during historical times is taken from accounts of their use for food in regions of the Caribbean where they were once plentiful.

The first in-depth study of manatee behavior was by Daniel Hartman, who spent several years observing them underwater in the late 1960’s and early 1970’s in the Crystal River of Florida. Every other account of the living animals is too brief to be more than a passing glance at a creature loved but not loved enough by our own species to halt its extinction.

Unlike humans, manatees have only themselves as entertainment. When they are not feeding on the river’s plant life or sleeping, they engage in play, often affectionate sex play.

When one compares creatures without possessions to human existence, trees seem poor houses, but it is the birds who command the view. Unencumbered, they travel by the stars, not by wheels and insurance policies, when the season changes. The planet is their home, not one bed, not one room in a dingy city full of strife.

The manatees are increasingly subjected to the frenzied attention of divers becoming sea creatures themselves, but when day ends, the moon lights their affection for one another.

What images you see are, for the most part, the happier side of the coin, not only for the manatees but for the divers as well.

But when a swimming hole dies, happiness dies.

The Crystal River in Florida is a name lingering out of the past. The crystal clear water is no longer clear.