Who invented the windsurf swap meet? 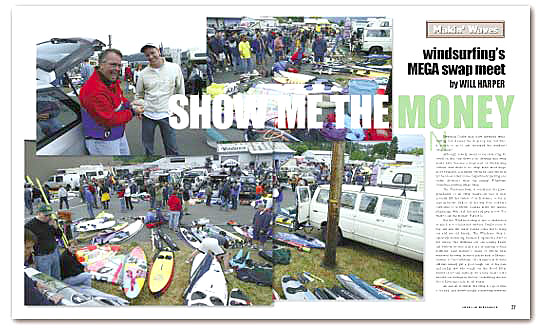 Newman Darby may have invented windsurfing, Bill Hansen the chop-top sail, but who, it occurs to us to ask, invented the windsurf swap meet?

Although nobody seems to be clamoring for credit on this one, there is no denying that swap meets have become a huge part of windsurfing culture. And there is no swap meet more huge, more heralded, acclaimed, sworn by (and sworn at by the Hood River Police Department parking and traffic division), than the annual Windance Canadian Holiday Mega Swap.

The Windance swap is considered the great-grandaddy of all swap meets—in fact, it may actually BE the father of such events, so far as anyone knows. Sailors all the way from southern California to northern Canada make the annual pilgrimage, with cash in hand and gear in tow. You want to see the money? Here it is.

But the Windance swap is also a celebration as much as a commercial venture. People come to buy and sell, but many people come just to hang out and see old friends. The Windance swap is especially endearing, because it signals the start of the season—the weekend you can usually finally sail without booties. And it is a re-uniting of wind brethren (and sistren?), many of whom have wintered far away, in exotic places such as Mexico, Hawaii, or the Caribbean. Our tanned and fit wind siblings usually get a good laugh out of the pale and pudgy few who tough out the Hood River winter (don’t tell anybody it’s a total blast), until we take our revenge in the bar—something we true Hood Riverians train for all winter.

All and all, however, the swap is a good time to be had, and there’s usually something everyone absolutely needs, but didn’t know it until today. Of COURSE you need a 550 cm mast for the Gorge, how did you get by without it all this time? And you never know, electric-pink mast-base pads may come back into style soon. Get ‘em while they’re hot, just to make sure. Or maybe you really don’t need a pair of size 14 booties (you’re size 9), but they are such a steal at $10— only used on Sundays by aunt Edna!

On the other end of the deal, how much stuff in that smelly windwagon do you actually use? Clear it out, clear it all out! Make room for the green! Think of the happy look on the face of your significant other when you burst in the door tonight flashing a huge wad of cashola. So what if you just sold the quiver of sails you bought last week and never used, you can get new ones with the cash! In the mean time, for those few precious hours between swap fever and post equipment-partem depression, it’s party time!

And then there are those who just love the art of the deal itself. The people who, in another life, were used car dealers, or carpet salesmen from Baghdad. Whether buying or selling, you can tell right away if you are dealing with a pro. Timing is everything, and they know it. If you’ve been sitting on that year-old Naish wave board all day, sweating it out because the rent is due tomorrow and the swap ends in an hour, they will know. If your eyes bug out, because you just found the perfect replacement 4.2 that’s been missing from your quiver since it went under that barge—they’ll know. You will lose. But that’s okay, because there will be another swap next year, and you’ll be able to get rid of what you shouldn’t-a-bought-for-too-much-money or find again that thing you shoulda-just-frickin-bought-even-if-it-was-too-much. Just as your windsurfing skills are constantly improving, so will your swap meet skills. One day you will be one of “them,” if you aren’t already.

Weather always plays an important part of any swap meet. If it’s windy, people are anxious and nervy. They want to get the heck out of there and go sailing. If it’s not windy, people forget that the wind will ever blow again. It’s hard to imagine needing a 2.8 when the river is a reflecting pond of glass.

This year somebody paid the weather bill on time, because ma nature cooperated beautifully. Cool temps in the morning with little breeze, but just enough energy in the air for a hint of anticipation of an afternoon session. Which did happen, by the way, so everybody got to go out and try their new toys when the wind picked up a few hours after the swap was over. We even got a few shots up at the point that day (see Hatchers, p. 62). Now that’s a “money” swap meet for you.

Industry “experts” often look at swap meets as a barometer of how the sport is doing. They figure that attendance and dollars exchanged represent participation in the sport, somehow. Well, if this year’s swap is a harbinger of things to come, send the pundits packing, because the sport of windsurfing is alive and well in Hood River. The show rocked the house, despite all predictions, and based on the amount and quality of goods changing hands this year, the sport will be healthy for quite a while yet.

That is if you believe in such things. In Hood River we just say, “Show me the money!”