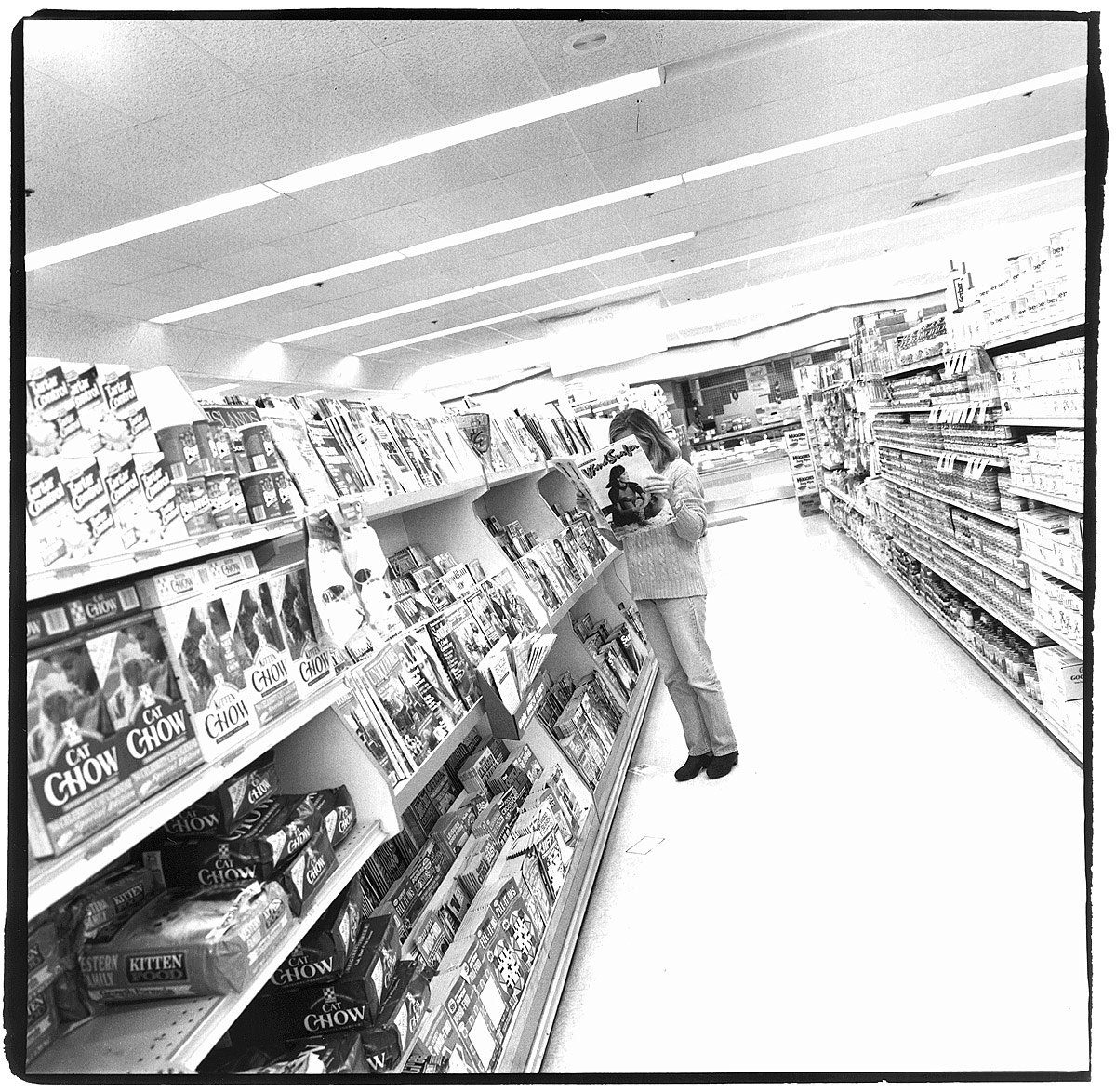 Love in the produce aisle.

“In case you didn’t know, the grocery store has become a widely accepted, time-honored and civilized place for that boy/girl thang to take place.”

The other day I was in the supermarket fulfilling one of the single person’s basic needs. No, I was not quizzing the clerk as to why the management steadfastly maintained their policy of not selling individually wrapped single slices of cheese.

I was there to fulfill a hunger of a different kind. That basic need for companionship  of the opposite sex. Anyway, me buying food at a supermarket… perish the thought! That’s what restaurants are for, aren’t they?

What better place to meet the fulfillment of your dreams than at the supermarket? This is the one place where people are exposed for what they really are. You know, you are what you eat. I’ve often said one’s shopping cart is a window to their soul (but that’s another story).

Hey, I’ll be the first to admit this is not a singles bar and consequently the chances of consummating a relationship right then and there (unless you’re Bob Packwood) are slim to none. But this is the nineties and you must be on guard against the kiss of death and you must be politically correct in your approach to the opposite sex.

In case you didn’t know, the grocery store has become a widely accepted, time honored and civilized way for that boy/girl thang to take place.

Anyway, at the bar you spend lots of money to impair your better judgement and your clothes reek of cigarette smoke for the next six months. Back to the supermarket.

So there I was checking out a brunette buying a bagette when, out of the corner of my eye, I caught a glimpse of a redhead in the vegetable department holding a couple of ripe tomatoes. As she maneuvered around the corner and up the next isle I decided to make my move.

She had stopped in front of the magazine rack and was glancing at a copy of American Windsurfer. My heart almost did a forward loop right out of my chest.

I casually (ha!) parked my empty cart next to hers and, hoping she would notice, reached for a copy of the same rag. I switched over to peripheral vision as I randomly flipped through the pages. Believing the tomatoes were ripe… I mean, the moment was ripe, I prepared to dazzle her with my typically clever comments when I realized I was staring at a page full of personal ads.

Quickly, I closed the magazine to check the cover. American Windsurfer, it said. Turning back to the personals, I did a quick scan. The headlines read: Landlocked Lover (liplocked maybe, landlocked never); Hey S.F. Bay Area Guys (doesn’t she mean fellas?);  5’7” Beauty (she’ll probably think I’m a beast); Shredding Startlet Seeks Sailing Soulmate (so she says) and then it struck me.

Angelic Petite Treasure (where’s my shovel?) buried in New York area (I live in the New York area!) blond, spirited, humorous (did you hear the one about…) willing to share life’s adventure (who’s this Indiana Jones anyway?) Seeking reliable Romeo (wherefore art thou!?).

Looking up, I realized the object of my affection, prior to my discovery of one of the great literary works of our century, had disappeared. Oh well, nice tomatoes, but they were probably grown in a greenhouse.

Logic would dictate that the personals are a natural progression in my quest for companionship: from the blatantly superficial bar scene to the subtleties of substance offered up in each carefully conceived personal. And, hey, the politics for this approach are tailored to fit the nineties.

But wait one long minute. Didn’t Godzilla meet King Kong through a personal ad? Aren’t the personals nothing more than a sexual supermarket for the paranormal? And who could forget Magellan’s personal ad which falsely promised a “luxury” cruise around the world?

Then again, Adam and Eve, Romeo and Juliet,  and Mork and Mindy all met through personal ads. With this uplifting thought I hurried home to ponder and reflect.

As I sat in the privacy and safety of my own home, I imagined that my angelic petite treasure was hunting for no one else but me. A voice inside convinced me I would  not be  flogged in public for responding to a personal. After all, this was from a national, outdoor lifestyle looks–good–on–anybody’s–coffee-table magazine.

I felt nervous as a school girl as I awaited a response from my imagined soulmate, for I had exposed many of my deepest secret thoughts, feelings and desires. This total stranger now knew that I respected Beavis and Butthead as modern-day renaissance men, I was deathly afraid of rabbits and that once, just once, I wanted to stand up in a hall filled with thousands of people and scream “Bingo!”

Ten days later I once again sat in the privacy and safety of my living room, clutching the envelope that contained her response. As I began reading I quicky realized that a harmonic chord of galactic proportions had been struck.

She too had genuine respect for Beavis and Butthead, never carried a rabbit’s foot, and although she didn’t share my bingo fantasy she had a most admirable dream of winning a citywide bowling tournament. If only Shakespeare were alive today…

I had suggested we meet at the local supermarket in the magazine section since that was where I first put hand to shovel, to unearth my buried treasure. The fateful day arrived.

Rounding the corner between the vegetable section and the magazine rack I sensed that a moment of truth was upon me. Before me stood the statue of a goddess holding a copy of American Windsurfer in front of her face.

The magazine slowly lowered to reveal a tousled mane of flaming red hair and at the moment our eyes met I instantly knew that this was meant to be. Lowering the magazine further, she revealed the most inviting smile a man has ever seen. As Yogi Berra once said, it was “deja vu all over again.” It was the girl with the nice tomatoes.

I asked her why she walked away the first time. Tamara said (her name was Tamara) she noticed I was fixated on the personal she had written and knew that was how we would meet (hmm, psychic, 1-900 number, income opportunity…)

As I stood there staring into her eyes, I imagined at some point in the not so distant future American Windsurfer would contain thousands of pages of personals with a token amount of editorial content. The publisher would find his proper place in history alongside such notable purveyors of romance as Hugh Hefner, L.A. madam Heidi Fleiss and, yes, the most famous romantic of all, Bill Clinton.

We walked down the isle sharing the same shopping cart and a stream of romantically charged love particles trailed behind us. We had become one, a comet streaking through the cereal section. At the same time, we both reached for the same box of Rice Crispies. SNAP…CRACKLE…POP!!!