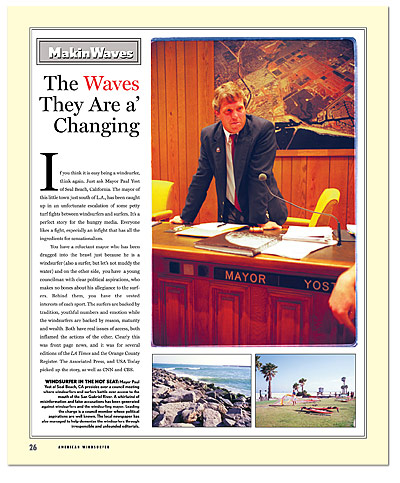 WINDSURFER IN THE HOT SEAT: Mayor Paul Yost of Seal Beach, CA presides over a council meeting where windsurfers and surfers battle over access to the mouth of the San Gabriel River. A whirlwind of misinformation and false accusations has been generated against windsurfers and the windsurfing mayor. Leading the charge is a council member whose political aspirations are well known. The local newspaper has also managed to help demonize the windsurfers through irresponsible and unfounded editorials.

IF YOU THINK it is easy being a windsurfer, think again. Just ask Mayor Paul Yost of Seal Beach, California. The mayor of this little town just south of L.A., has been caught up in an unfortunate escalation of some petty turf fights between windsurfers and surfers. It’s a perfect story for the hungry media. Everyone likes a fight, especially an infight that has all the ingredients for sensationalism.

You have a reluctant mayor who has been dragged into the brawl just because he is a windsurfer (also a surfer, but let’s not muddy the water) and on the other side,  you have  a young councilman with clear political aspirations, who makes no bones about his allegiance to the surfers. Behind them, you have the vested interests of each sport. The surfers are backed by tradition, youthful numbers and emotion while the windsurfers are backed by reason, maturity and wealth. Both have real issues of access, both inflamed the actions of the other. Clearly this was front page news, and it was for several editions of the LA Times and the Orange County Register. The Associated Press, and USA Today picked up the story, as well as CNN and CBS.

Meanwhile the mayor, trying to find an amicable and fair solution to the problem, got the blunt of the attack from the surfers for just suggesting a dialogue.  His efforts to  serve the public within the council chamber were undermined by the interests of the opposition. Simple steps that encouraged dialogue between the surfers and windsurfers on Seal Beach could have diffused a problem that many windsurfers called a “non-issue.” But sadly, it seemed that some greater political gains could be made by exploiting a conflict. Predictably, the issue escalated beyond reason; both the windsurfers and the surfers consulted attorneys and created their own defense league funds. 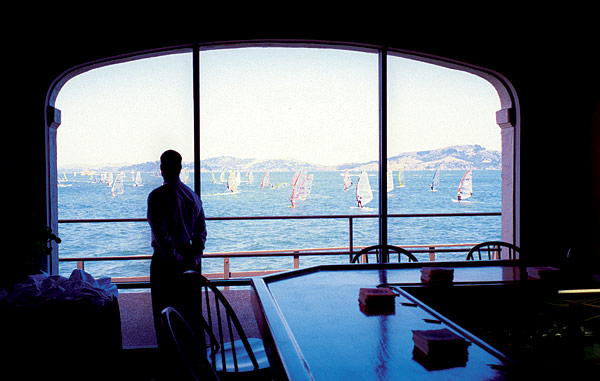 ACCESS ISSUES: Proposed expansion of the SanFrancisco airport will close three or four top windsurfing launch sites. The newly finished Crissy Field Park could be severely taxed if other sites on the Bay are extinguished. The San Francisco Boardsailing Association with Save the Bay and the Sierra Club are hard at work fighting the plans. Because of the renovation of Crissy Field, the US Nationals held at the Bay this past July, had an access problem. Fortunately, the San Francisco Yacht Club stepped up to the plate and hosted the 100 plus racers off their back yard.

Across the country in Miami, the South Florida Boardsailing Association is celebrating the reopening of their beloved Virginia Key. After a two year battle, members of the SFBA can breath a sigh of relief and realize what a monumental achievement it is to overcome a city commission bent on development. “Virginia Key is more than just another place to windsurf—something much more special and spiritual. This was the beach where I lost my windsurfing virginity,” said Lonny Morris. But according to Cindy Augustyn, a windsurfing lawyer in Miami, it took everyone, windsurfers, historians, environmentalists and black activists, to reopen the beach. “Despite the beach reopening, the City  has not abandoned plans for development. We hope the civic interest will continue until more permanent protection is in place.” 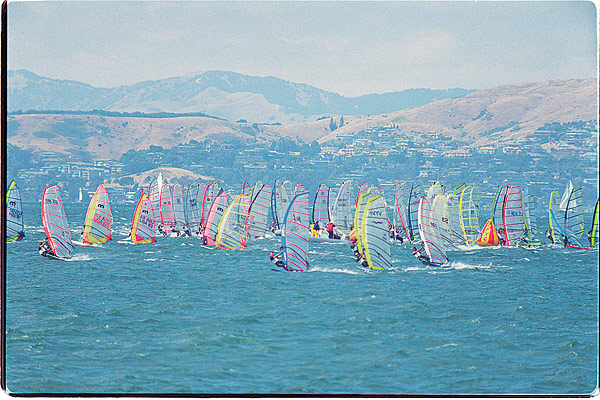 Back on the West Coast again, where access to the water seemed to be threatened everywhere, more recent is a proposal to expand the San Francisco International Airport runway. This plan would extend the runway down into the Bay offshore and would block access to the outer Bay at the popular Coyote Point. This proposed plan could affect other sites such as Third Avenue, Oyster Point, Flying Tigers and Embassy Suites. The San Francisco Boardsailing Association has sounded the alarm within the windsurfing community. But powerful allies, comprised of a citizens’ revolt against the airport and led by the Save the Bay organization, are already in place. They are highly respected and super-organized, fully plugged in to the political process and already working closely with windsurfers to stop the massive bay fill. The Sierra Club is also fighting hard against the airport plans. 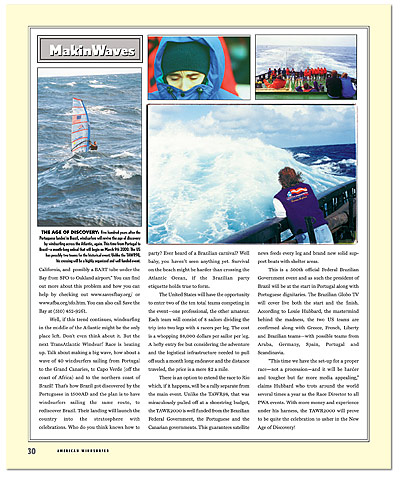 “If you think this is a hopeless battle, THINK AGAIN,” said George Haye, member of the SBA.  “Angry citizens have blasted the airport’s plans at each public meeting so far. In the environmentally-aware Bay Area, there are a lot of people working to fight the big-money interests (who want to increase SFO airport capacity) and the catastrophic environmental disaster they would cause. Also, numerous regulatory agencies have the power to stop filling the bay if viable alternatives exist. WE MUST SHOW THAT ALTERNATIVES EXIST. We must push  for no-fill alternatives, including technology solutions, expanding other airports, high-speed trains between the bay area and southern California, and  possibly a BART tube under the Bay from SFO to Oakland airport.” You can find out more about this problem and how you can help by checking out www.savesfbay.org/ or www.sfba.org/sfo.htm. You can also call Save the Bay at (510) 452-9261.

THE AGE OF DISCOVERY: Five hundred years after the Portuguese landed in Brazil, windsurfers will revive the age of discovery by windsurfing across the Atlantic, again. This time from Portugal to Brazil—a month-long ordeal that will begin on March 9th 2000. The US has possibly two teams for the historical event. Unlike the TAWR98, his crossing will be a highly organized and well funded event. 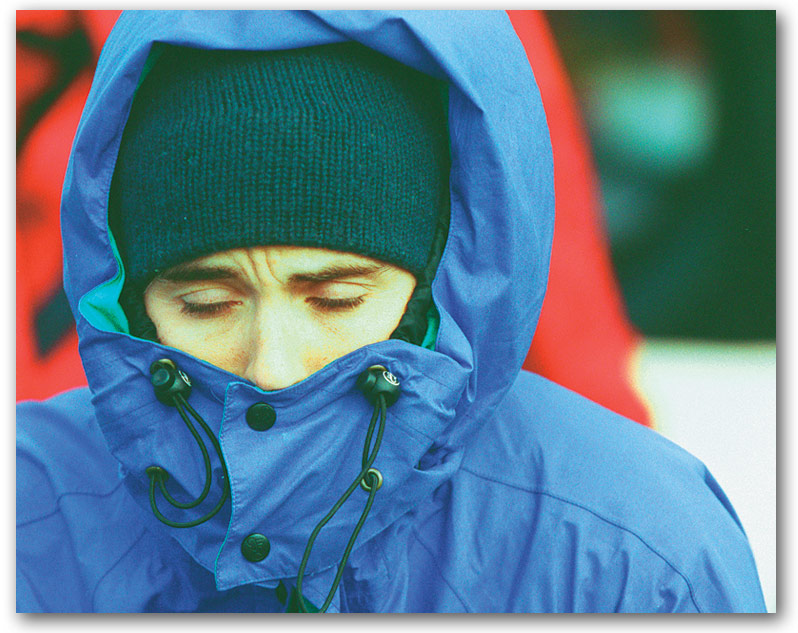 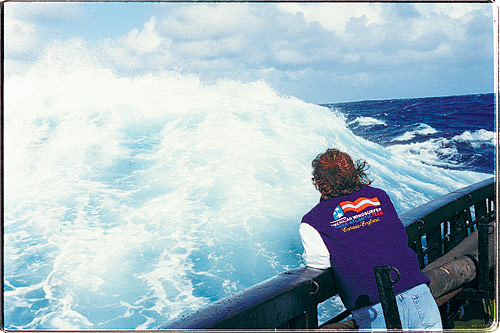 WELL, if this trend continues, windsurfing in the middle of the Atlantic might be the only place left. Don’t even think about it. But the next TransAtlantic Windsurf Race is heating up. Talk about making a big wave, how about a wave of 40 windsurfers sailing from Portugal to the Grand Canaries, to Capo Verde (off the coast of Africa) and to the northern coast of Brazil! That’s how Brazil got discovered by the Portuguese in 1500AD and the plan is to have windsurfers sailing the same route, to rediscover Brazil. Their landing will launch the country into the stratosphere with celebrations. Who do you think knows how to party? Ever heard of a Brazilian carnival? Well baby, you haven’t seen anything yet. Survival on the beach might be harder than crossing the Atlantic Ocean, if the Brazilian party etiquette holds true to form.

The United States will have the opportunity to enter two of the ten total teams competing in the event—one professional, the other amateur. Each team will consist of 8 sailors dividing the trip into two legs with 4 racers per leg. The cost is a whopping $8,000 dollars per sailor per leg. A hefty entry fee but considering the adventure and the logistical infrastructure needed to pull off such a month long endeavor and the distance traveled, the price is a mere $2 a mile.

There is an option to extend the race to Rio which, if it happens, will be a rally separate from the main event. Unlike the TAWR98, that was miraculously pulled off at a shoestring budget, the TAWR2000 is well funded from the Brazilian Federal Government, the Portuguese and the Canarian governments. This guarantees satellite news feeds every leg and brand new solid support boats with shelter areas.

This is a 500th official Federal Brazilian Government event and as such the president of Brazil will be at the start in Portugal along with Portuguese dignitaries. The Brazilian Globo TV will cover live both the start and the finish. According to Louie Hubbard, the mastermind behind the madness, the two US teams are confirmed along with Greece, French, Liberty and Brazilian teams—with possible teams from Aruba, Germany, Spain, Portugal and Scandinavia. 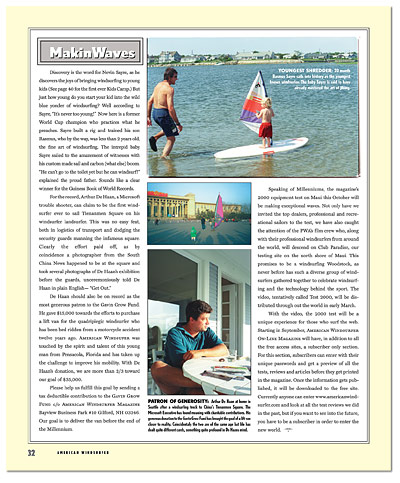 “This time we have the set-up for a proper race—not a procession—and it will be harder and tougher but far more media appealing,” claims Hubbard who trots around the world several times a year as the Race Director to all PWA events. With more money and experience under his harness, the TAWR2000 will prove to be quite the celebration to usher in the New Age of Discovery!

DISCOVERY IS THE WORD for Nevin Sayre, as he discovers the joys of bringing windsurfing to young kids (See page 40 for the first ever Kids Camp.) But just how young do you start your kid into the wild blue yonder of windsurfing? Well according to Sayre, “It’s never too young!”  Now here is a former World Cup champion who practices what he preaches. Sayre built a rig and trained his son Rasmus, who by the way, was less than 2 years old, the fine art of windsurfing. The intrepid baby Sayre sailed to the amazement of witnesses with his custom made sail and carbon (what else) boom. “He can’t go to the toilet yet but he can windsurf!” explained the proud father. Sounds like a clear winner for the Guinness Book of World Records. 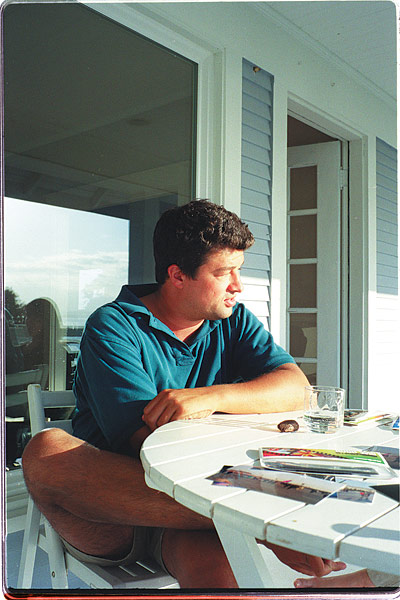 PATRON OF GENEROSITY: Arthur De Haan at home in Seattle after a windsurfing treck to China’s Tienanmen Square. The Microsoft Executive has found meaning with charitable contributions. His generous donation to the Gavin Grow Fund has brought the goal of a lift van closer to reality. Coincidentally the two are of the same age but life has dealt quite different cards, something quite profound in De Haans mind.

FOR THE RECORD, Arthur De Haan, a Microsoft trouble shooter, can claim to be the first windsurfer ever to sail Tienanmen Square on his windsurfer landsurfer. This was no easy feat, both in logistics of transport and dodging the security guards manning the infamous square. Clearly the effort paid off, as by coincidence a photographer from the South China News happened to be at the square and took several photographs of De Haan’s exhibition before the guards, unceremoniously told De Haan in plain English— “Get Out.”

De Haan should also be on record as the most generous patron to the Gavin Grow Fund. He gave $15,000 towards the efforts to purchase a lift van for the quadriplegic windsurfer who has been bed ridden from a motorcycle accident twelve years ago. American Windsurfer was touched by the spirit and talent of this young man from Pensacola, Florida and has taken up the challenge to improve his mobility. With De Haan’s donation, we are more than 2/3 toward our goal of $35,000.

SPEAKING OF Millenniums, the magazine’s 2000 equipment test on Maui this October will be making exceptional waves. Not only have we invited the top dealers, professional and recreational sailors to the test, we have also caught the attention of the PWA’s film crew who, along with their professional windsurfers from around the world, will descend on Club Paradise, our testing site on the north shore of Maui. This promises to be a windsurfing Woodstock, as never before has such a diverse group of windsurfers gathered together to celebrate windsurfing and the technology behind the sport. The video, tentatively called Test 2000, will be distributed through out the world in early March. 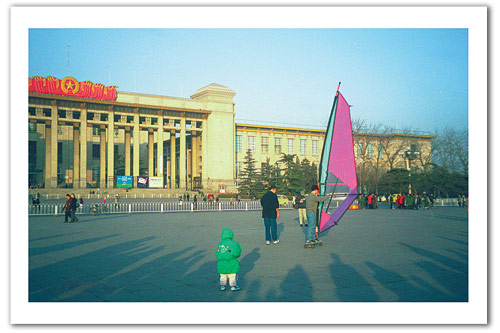