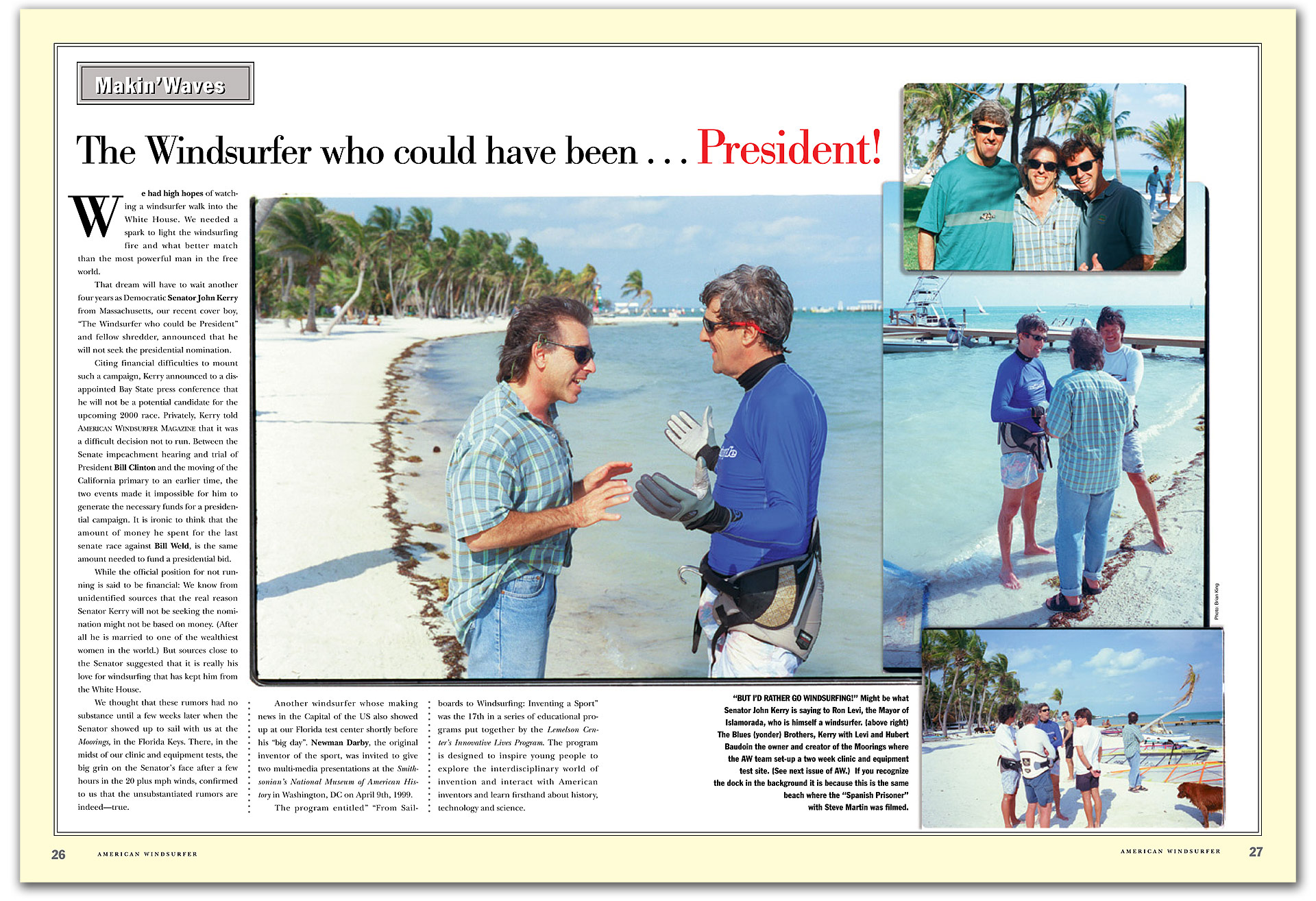 …sources close to the Senator suggested that it is really his love for windsurfing that has kept him from the White House.

“BUT I’d RATHER GO WINDSURFING!” Might be what Senator John Kerry is saying to Ron Levi, the Mayor of Islamorada, who is himself a windsurfer. (above right) The Blues (yonder) Brothers, Kerry with Levi and Hubert Baudoin the owner and creator of the Moorings where the AW team set-up a two week clinic and equipment test site. (See next issue of AW.)  If you recognize the dock in the background it is because this is the same beach where the “Spanish Prisoner” with Steve Martin was filmed.

WE HAD HIGH HOPES of watching a windsurfer walk into the White House. We needed a spark to light the windsurfing fire and what better match than the most powerful man in the free world.

That dream will have to wait another four years as Democratic Senator John Kerry  from Massachusetts, our recent cover boy, “The Windsurfer who could be President” and fellow shredder, announced that he will not seek the presidential nomination.

Citing financial difficulties to mount such a campaign, Kerry announced to a disappointed Bay State press conference that he will not be a potential candidate for the upcoming 2000 race. Privately, Kerry told American Windsurfer Magazine that it was a difficult decision not to run. Between the Senate impeachment hearing and trial of President Bill Clinton and the moving of the California primary to an earlier time, the two events made it impossible for him to generate the necessary funds for a presidential campaign. It is ironic to think that the amount of money he spent for the last senate race against Bill Weld, is the same amount needed to fund a presidential bid.

While the official position for not running is said to be financial: We know from unidentified sources that the real reason Senator Kerry will not be seeking the nomination might not be based on money. (After all he is married to one of the wealthiest women in the world.) But sources close to the Senator suggested that it is really his love for windsurfing that has kept him from the White House.

We thought that these rumors had no substance until a few weeks later when the Senator showed up to sail with us at the Moorings, in the Florida Keys. There, in the midst of our clinic and equipment tests, the big grin on the Senator’s face after a few hours in the 20 plus mph winds, confirmed to us that the unsubstantiated rumors are indeed—true.

RIGGING UP 30 YEARS OF HISTORY: (below) Olympic medalist Mike Gebhardt prepares to test Newman Darby’s original sloop rig sail. The Olympic champion and Pat LeMehaute were both impressed by the characteristic and performance of the rig. Everyone took turns on the WindSpear, Darby’s buoyant keel design that replaces a centerboard. (above) Darby with Alison Oswald at the Smithsonian’s lecture hall.

Another windsurfer whose making news in the Capital of the US also showed up at our Florida test center shortly before his “big day”. Newman Darby, the original inventor of the sport, was invited to give two multi-media presentations at the Smithsonian’s National Museum of American History in Washington, DC on April 9th, 1999.

The program entitled” “From Sailboards to Windsurfing: Inventing a Sport” was the 17th in a series of educational programs put together by the Lemelson Center’s Innovative Lives Program. The program is designed to inspire young people to explore the interdisciplinary world of invention and interact with American inventors and learn firsthand about history, technology and science.

“For a person who has no public speaking background, Newman was an absolutely spectacular ambassador for the sport. Everyone here adored him!” Exclaimed Alison Oswald, an archivist at the Smithsonian. “It was an unique and rare opportunity to have a living inventor, with the invention itself and the archivable documentations of the invention all in one place.”

It was also unique and rare for us when Newman show up at our clinic/test a few weeks earlier. He brought his new WindSpear and the original sloop rig sail to play with us. Seeing a few of the leading technical gear heads of the sport Ken Winner, Mike Gebhardt and Pat LeMehaute in the presence of the man who started it all was an awesome occasion that went uncelebrated.

“Newman has an unquenchable enthusiasm for the sport and invention,” remarked Technical Editor, Ken Winner who observed firsthand, the outstanding craftsmanship of Darby’s WindSpear board.

The extraordinary two day merging of knowledge, ideas and roots has inspired everyone, including Darby who is said to have plans to develop another prototype board that is smaller, faster, lighter and cheeper to build.

Speaking of smaller, lighter and cheeper. (Three out of four isn’t bad). Ken Winner’s invention the WindGlider has inspired Nevin Sayre, this issue’s cover and former World Cup Champion to create a Free Learn to Windsurf Camp for kids between the ages of 6 and 12. The two day event will take place on Kalmus Beach in Hyannis, MA and will offer three different sessions for kids to sign up. American Windsurfer Magazine and WindGlider will help provide the necessary equipment for this event and the CCWA, the Cape Cod Windsurfing Association has pitched in along with a number of companies such as Fiberspar. (See ad on page 4&5)

This is the first kids camp to be held in the United States and American Windsurfer will be there to capture the spirit. There will be a limited number of registration space available so if you want to get your kids started on windsurfing call 1-800-292-2772 right away to reserve a spot.

While we’re on the subject of instruction and clinics, American Windsurfer is proud to announce the involvement of Mark Archer as the new Instructional Editor. Archer who has been teaching windsurfing for the past twenty years—the past seven in Aruba—is originally from Lincolnshire, England. He has been a contributing editor for the magazine for the past four years and is now poised to play a bigger role in instructional articles for the magazine.

Also, with the backing of the magazine, Archer will be instrumental in creating a new era in Windsurfing Clinics.

From the East Coast to the West, from the Greek Islands to the Caribbean Islands, the teaming of Archer and this magazine will help to expand your windsurfing horizons like never before. On the East Coast, three solid proven clinics have been established. This includes the Clinic/Tests on Islamorada, Fl., the “Golden Ponds” of New Hampshire and two events on Cape Hatteras. On the West Coast, a fully mobile approach is adopted for Hood River and the San Francisco Bay area. This mobile system will take advantage of the variety of sailing venues available at these locations. Overseas, exotic islands, travel adventure and resort sailing are scheduled for places like Maui, Greece, Aruba, Bonaire, and Margarita. (See page 81 for a complete schedule.)

Windsurfing has never been so much fun. It’s no wonder we can’t get into the White House.