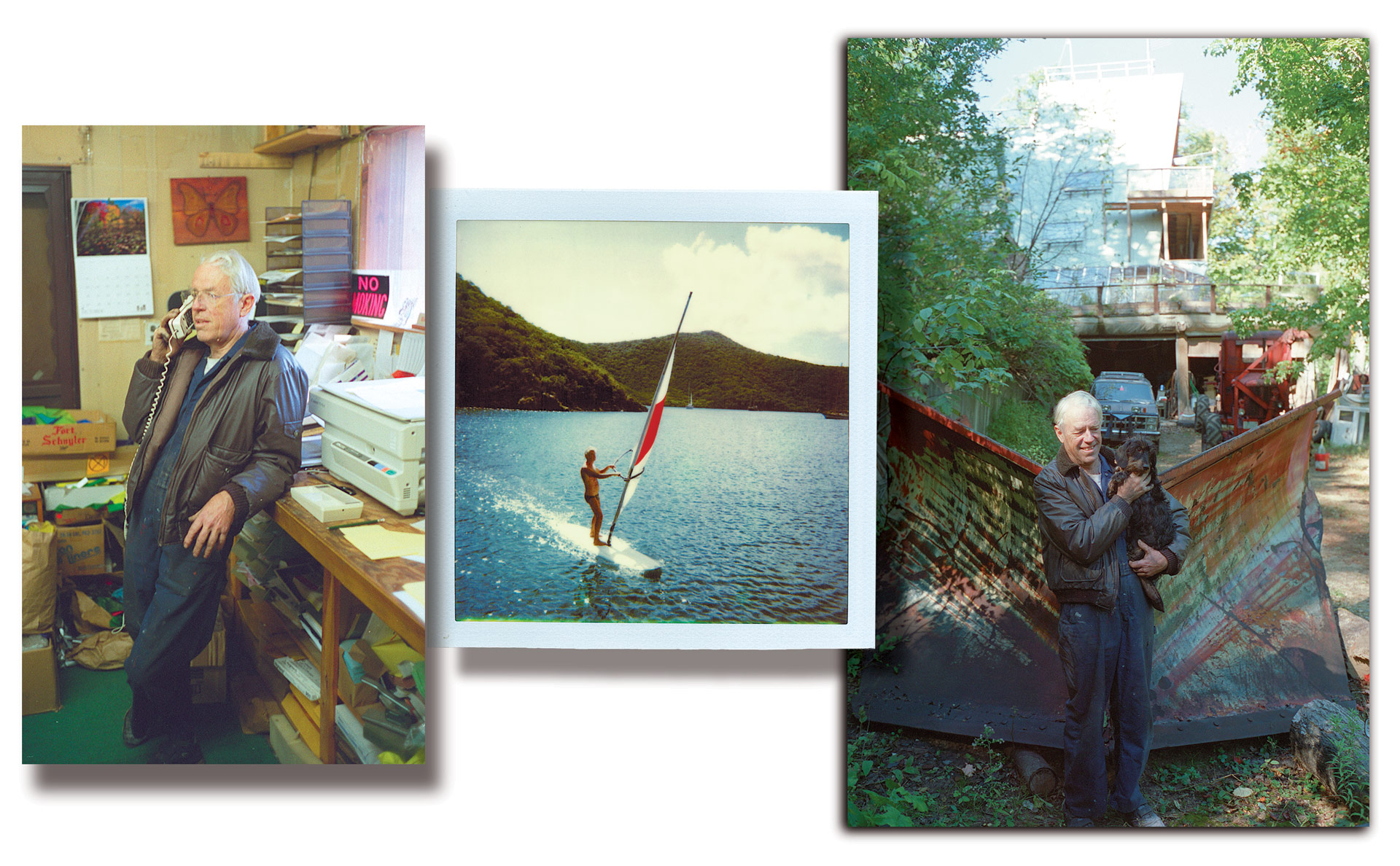 The incredible story on how an original manuscript was discovered!

Jack Stephenson’s contribution to windsurfing goes beyond bringing the forgotten manuscript to the attention of AW. Stephenson is also the inventor of the Dacron/Mylar material used in sails prior to todays monofilm sails. Sailing off Trellis Bay in 1988 and holding Loki in front of his NH home.

IT WAS A BREEZY afternoon on an obscure lake in the middle of New Hampshire that fate crossed my path, chuckling with a mysterious sense of serendipity.  My name is John Chao and my passion for windsurfing had entangled me with the birth of this magazine. On this Sunday afternoon, I managed a rare opportunity to shed the burdens of publishing to windsurf at the home of Walt and Mary Flinn.

Fate had chuckled with me a few times before when it came to Walt and Mary Flinn. I became their next door neighbor three years ago through a series of fortuitous coincidences that brought me to the shores of Lake Winnipesaukee. In the two years that I lived next to them, our relationship grew from warmth, through affection, and then, a deep sense of kinship. The happenstance surrounding this relationship is extraordinary, and if you can put up with this seemingly self absorbed prelude, the story becomes even more intriguing.

In those days I would sometimes escape the struggles of a start-up magazine by windsurfing from the beautifully dilapidated lake house where I served as a semi-caretaker. As I sailed from the beach into the northwest winds, Walt and Mary would watch with delight and, no doubt, sail with me vicariously. They also rejoiced with me at the birth of each issue of American Windsurfer. They would read every word and then feed me with encouragements. They loved the idea of windsurfing.

Regrettably, I never quite managed to persuade them that they are not too old to learn to windsurf. Still, every time I sail, they soar with me and I am happy to entertain them. Their kindred spirits  were rare and mysterious to me, even profound when I discovered that one of them grew up in the same town I grew up in Illinois, one of their  parents retired to the same town as my parents did in California, and their daughter bought a house in the same midwest town that my sister did, in the same year. Random coincidence? Or fate, chuckling?

So it was with this sense of connection that I prepared to launch from the Flinns’ that windy Sunday for the first time after moving from my beloved point on the lake. They had invited me many times before to launch from their home and were quite happy to find me rigged and ready to go upon their return from church. The wind was good and I sailed for two hours. As I neared the shore on my return, I could see an assembly of people on the Flinns’ lawn and it became apparent that they were having a picnic but had been too polite to tell me for fear that I might feel intrusive. They pulled me out of the water and proudly showed me off to all their friends from the church choir.  That was when fate chuckled for me again.

His name is Jack Stephenson, a distinguished white haired gentleman who spoke softly and intelligently, revealing a knowledge about windsurfing that came from an era quite removed from that of the sport today. We found instant rapport and I became fascinated  by the man.

Jack Stephenson was a former aeronautical engineer for Hughes Aircraft in California who turned his hobby of building tents and sleeping bags into a full time business. (I found out later that the Stephenson tent and sleeping bags were famous for their quality and their makers notorious for their use of completely nude models in their catalogues and videos.) Stephenson told me about his three airplanes and his passion for flying and I told him about my experience in flying an F-16.

As the picnic wound down and people started to leave I asked Jack how he got involved with windsurfing. In 1969, he said, he co-chaired a symposium on wind-powered crafts, a man came and presented a paper about wind-powered surfboards. “It was the only idea from the symposium that took off.  Unfortunately,” said Stephenson, “Jim Drake never got the proper credit, because it was his partner, Hoyle Schweitzer, who saw the potential in marketing and popularizing the idea and who made millions after buying him out.”

I phoned Jack several days later to take him up on an invitation to fly in the polar opposite of an F-16. The significance of our encounter didn’t really sink in, though we spoke again about Jim Drake and the symposium. On impulse I asked if he might still have the paper that was presented. He said he did, and suggested that we drive to his nearby 49 acre mountainside home to find it.

The house that Jack built with his wife Joan and their four children has an originality and distinction rarely found in today’s homogenized and uni-dimensional existence. In the remarkable experience of walking into this man’s world, it became clear that the Stephenson’s do not throw many things away.  Their home is an archive, a library, a rich cultural presence in this little town of Gilford, New Hampshire.

Jack rummaged through his files which were scattered throughout his five thousand square foot, five story home and shop. It is a place overflowing with memorabilia to the point that the hallways have become mere trails through a magical and chaotic past.  Jack knew exactly where the original paper ought to be, offering a series of  descriptions of where it was, as well as the circumstances which would have led the paper to that resting place.

By now I was more interested in the nudes than any intellectual paper and began probing further into Jack Stephenson’s world.

While he looked, I became distracted by the many poster-like photographs of nude models displaying his products. They shared the walls of his production space with pictures of airplanes and sailboats. I was quite taken by the display and was mentally praising Jack’s marketing skills when he came in and said. “I didn’t find it where I thought it was but I know where it is and will bring it to you.” For some crazy reason the prospect of seeing an old windsurfing manuscript still didn’t impress me much. By now I was more interested in the nudes than any intellectual paper and began probing further into Jack Stephenson’s world.

I continued to tour the house and with each room I walked into another period or passion of Jack’s ingenious life. By the time I drove away, I was feeling jubilant just to have found such a free spirit. To me, people and places like this existed only in far away worlds; never in my own backyard.

The thought of the manuscript didn’t cross my mind again until several days later when Jack walked into my office and handed me a large manila envelope. It was only when I actually saw the aged yellow manuscript sliding out of the envelope, that I realized the significance of the find. Right before me was the original holy grail of windsurfing; the inventor’s master plan. It was perhaps the only original paper in existence, the only documentation of the origin of the sport. And it not only landed literally in my lap, it arrived at a time when the sport of windsurfing desperately needed to find nurture in its roots.

Those mysterious coincidences sometimes have to slap your face a few times before you realize that fate is smiling at you. When the smile walks in your door and delivers a circumstance whose probability may be higher than a million to one, you can’t deny life’s synchronicities or how they form a guiding force filled with alchemy and affirmation for the future.

And it does kind of make you wonder, what’s going to happen next?