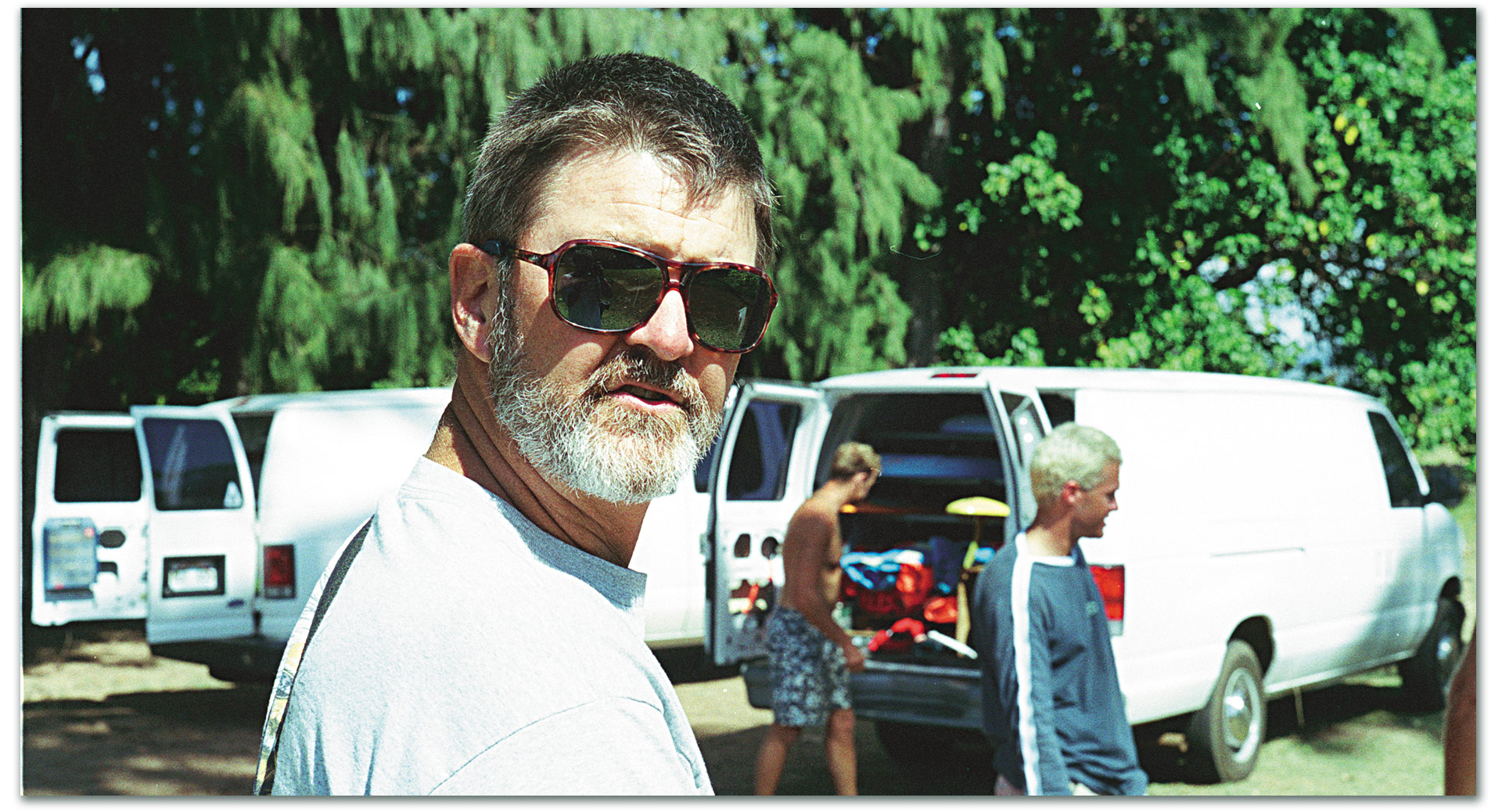 “It’s about being on the water and feeling the power.”

Two years ago, he was considering turning towards his writing skills as opportunities within the windsurfing world seemed to have dried up. Today he stands as the only sail designer who has produced two World Champions for two companies.

BARRY SPAINER: Your article (8.1) gives the impression there was some giving up going on.

American Windsurfer: By who? The Neil Pryde group or Björn?

BS: By anybody. Mostly, you’d have to say, the people behind Björn. I don’t believe that. I know how things went there and yeah, they were big. They were a company that was in disarray from having a designer that had problems and the work wasn’t right and they were coming up with stuff at the last minute and hiring a new guy and when they hired the new guy, they threw together piles of sails and shipped them out here. If that’s giving up, you know…I mean they had it. Just like any defending army would do. It’s like a war out there and they wanted to win right there to the last thing.

Björn Dunkerbeck always said to me he wanted to retire undefeated and to say that well, twelve was enough, okay well, I have a different picture on the whole thing. It took a tremendous effort on the part of all the people that were working in our little group to achieve what we did in that amount of time. I mean it was not like somebody just laid it out there on a plate. Micah (Buzianis), we felt, was far more of a threat to our being able to win because Micah’s program was consistent and his people were consistent. Micah’s been working with the same guys. They were making progress. We were testing against their sails because those were the guys we felt gave us the stink and in the end it turned out that the two of us, Micah and Kevin, were ahead of the other guys. And, to have Björn in 3rd place was indicative of more than just, he didn’t just go down one. He went down to where he was working at being there. And then there were a lot of other guys who were using those new sails who were down further than they should have been maybe.

I feel like we made big progress. Now the year before, we were on our backs. We were struggling with anything, and it would have been difficult to beat him under those circumstances but since the year 2000, we were on it. We were fully prepared, ready to be in any race. We had everything tuned up. It was a damn shame that Matt broke his ankle because I know that he would have been bashing away on the door as hard as Kevin.

BS: I don’t do it for that reason.

AW: [Still laughing.] What are you doing it for?

BS: It is only about the winning. I don’t care about the guy that you are beating. It doesn’t matter who that is. There has to be a whole mess of them. But the idea of winning this is because we all want to be winners.

AW: But you’ve got to have some sense of satisfaction with the hardship you went through.

BS:Well one day Neil (Pryde the man) came to me at the trade show and he said, “Good job at the Canaries” and then when we parted he said, “Good luck but not too much luck.” So I know maybe we got him thinking there. It’s just life. I can’t hold anything against the guy. He needs to do what he wants to do. We made distinct choices for ourselves. We were fortunate to be able to become involved with a company like Gaastra, because it’s an old brand with a lot of brand loyalty. Being able to bring design and dedication to the brand loyalty has been a great thing for us. It has allowed us to achieve something that I don’t think five people like ourselves could have done under ordinary circumstances.

We really had an opportunity and everybody stood on the plate and we just kept pounding. And even at the last day there was some question about whether Kevin could win the overall because he had to have results in the waves. I think it was right down to the last couple of heats that he sailed. If he had lost those, maybe he wouldn’t have won the title. So, it was damn close and it was a hell of a lot of fun and when it was over all he could think about was, “Man, I’ve got to down to the harbor tomorrow to test race sails for going to Thailand.”

AW: What is your thought about Kevin?

BS: He’s pretty steady. He’s focused and he’s quiet, concentrating on things. Sometimes he doesn’t tell me enough because he’s quiet. But, I think his relationship with Phil (McGain) and the trust he has in the testing methods, that kind of thing, takes him in and out of races with supreme confidence. All I can do is just make sure everything is as ready as can be. The night before we’re off to a big event, all the sails come out, everything’s rigged and checked and measured with no damage or anything. It’s like, “Okay guys, you’re at it. Go!” And then at that time I actually got a nice vacation and time with my family, and it was really nice to see the results coming in.

AW: Aren’t you the only sail designer that has mastered two World Champions?

BS: I suppose you could say that.

AW:  And, with different brands?

BS: Yes. I think you could say that.

AW: Never thought about it that way huh?

But the opportunities for racing are in all these new things that are coming up and people are very enthusiastic. At the race in Florida, there were 192 competitors and it was a hell of a thing to have those people show up for potentially one day of racing. When it gets bigger, and I think it will, there will be higher levels of people at those higher numbers, and the racing will get tighter and there’ll be more enthusiasm for it and at the same time kids like these Bonaire kids and young guys from all over that want to get into the freestyle and wave stuff—I just think windsurfing is doing well.

That’s my feeling and impression that people love it still. They’re not going to stop doing it. They’re going to teach others and people will continue to be inspired, just by looking at it and seeing it happen. It’s going to be good. The sport is going to go on. It’s not something that goes away. It’s sailing, at its root. Sailing is something that a unique kind of individual appreciates. There will always be those people. It’s not about windsurfing. It’s about being out on the water and feeling the power. However you translate it, it’s way cool.