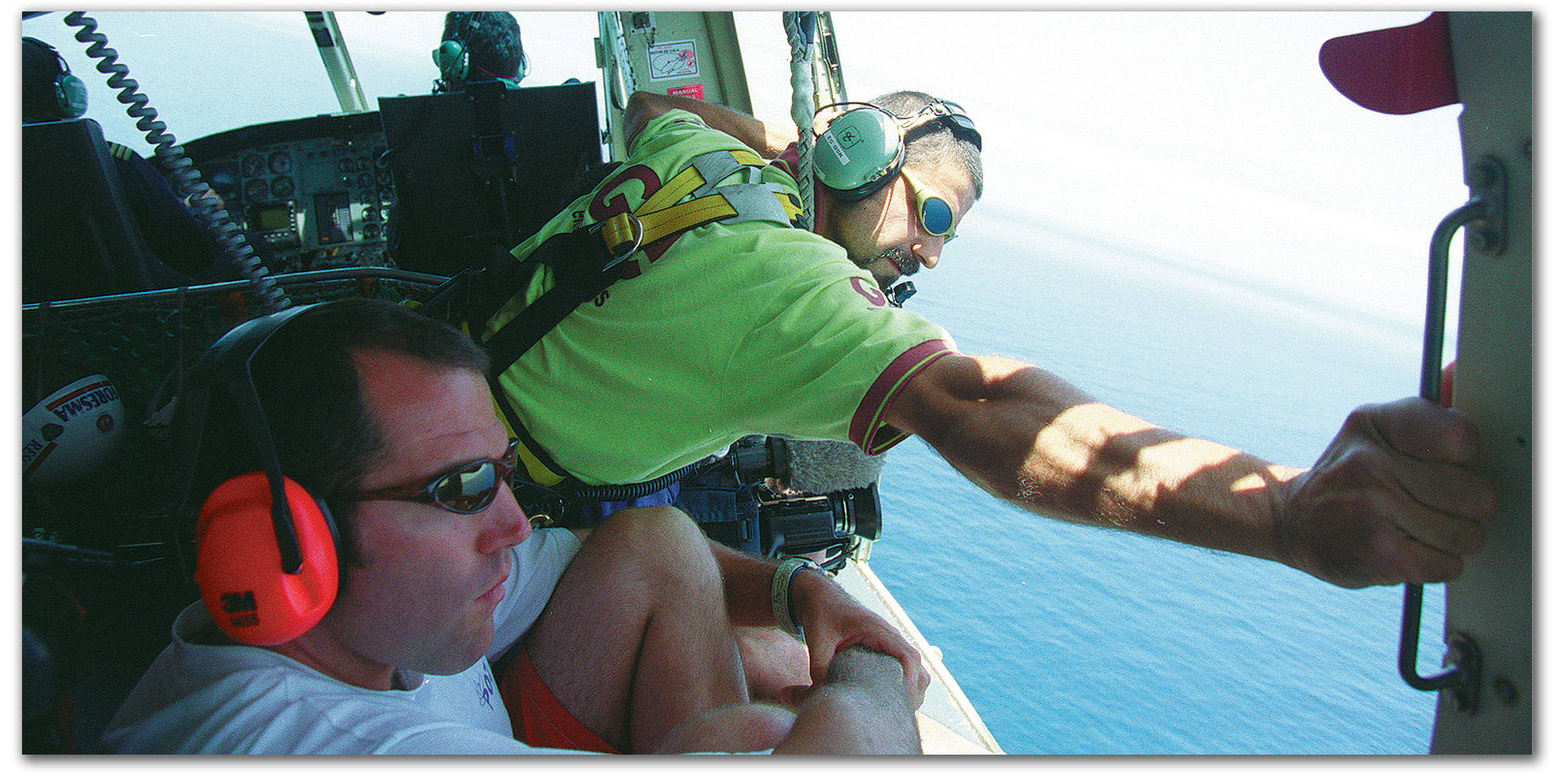 Ever wonder about the power of a woman?

WHIRLWIND SEEKERS: Dan Welch (bellow, left) at work  way around the world on board the Daq’Attack. Writer Rob Bryant in Gran Canaria with American Windsurfer’s intern photographers Dana Sava and John Chao, Jr. (above) Edwardo Cubero Zamorano, one of the five helicopter crew members who assisted in the making of Aria Canaria. The GIE Emergencias crew of the Helicop Tero, Ramon Bustelo Soto,(left to right) Jose Antonio Bolanos Otarola, Carlos Viera Rodriguez, Edwardo Cubero Zamorano, and Edwardo Lamar Marias show us that they know how to shred on the water and in the air.

Dan Welch is doing something which may be every windsurfer’s dream:  set sail around the world on a windsurfer laden sailboat, drop anchor at every seductive piece of water you can find, and shred till you drop.

Almost half way around the world, Dan and wife Liz are near New Caledonia and have already logged more than 30,000 nautical miles. Not that the world is that much bigger, they’ve just been taking their time roaming about the Caribbean first, and now the Pacific.

Roaming is a good word considering the fact that they are coming up to ten years this November. The all-too-short synopsis of their adventure is unfortunately just a drop in the ocean, but it is a beginning with more to come. “More Than Half a World to Go” is the talented Mr. Welch’s first feature display in American Windsurfer. You’ve already seen many short articles by our bobbing editor including last issue’s “It’s Making Monkeys Out of Us”.

Now, his writing will never read the same as you vicariously sail around the rest of the world with him and know where those words are coming from.

When it comes to putting a story together, there is the lone writer such as Dan Welch in some remote part of the world or, in the case of the Gran Canaria, a whole team of WindMakers and more, all are gathering pieces and ingredients that will go into the bouillabaisse of the printed page.

The World Cup event at Gran Canaria was just a possible low priority event on our calendar. Even a week before, there was no plan for the magazine to cover the overseas gathering. How quickly things can change. Much of the blame can be placed on the charismatic personality of Bjorn Dunkerbeck’s mother Ulla. It was her reminder of a promise publisher John Chao had made to her four years ago that got the ball rolling.

Ulla and Eugene Dunkerbeck’s notoriety rest not only on the fact that they are the parents of the twelve time World Champion, they are the architect of the sport of windsurfing on Gran Canaria and the shakers who moved the Grand Slam event on this little island into the biggest and best event of the World Tour.

Ever wonder about the power of a woman? Well just feast your eyes on the three articles and forty-eight pages devoted to something that wasn’t even planned.

Having helicopters provided to us for a week might have something to do with scoring big pages too. It was Antonio Del Toro, a lawyer on the island, who collected on some favors and acquired the GIE Emergencia helicopter. He and his partner Pedro Massieu, along with Bjorn’s parents, and board shaper Carlos Sosa are the true backbones of windsurfing on the island. It also doesn’t hurt to have some friends in high places such as Luis Padilla of the Gran Canaria Tourism Board to secure the game. With the government’s help, Pozo Beach has acquired the first windsurfing center of its kind in the world.

To cap off the spontaneous coverage, two hard-working summer interns took their licks on the shores of Pozo and got to dangle their legs over the side of an airborne chopper. Dana Sava, a Photography major from Montana University, and John Chao, Jr., both contributed to the image gathering of the articles. Their work surrounds the daily reports dished out by PWA’s Press Manager Rob Bryant. American Windsurfer Magazine was Dana Sava’s second intern experience. Her first was in New York City with the prestigious Magnum Photo Agency. She has now returned to Montana to finish her degree and consider the meaning and magic of a WhirlWind Seeker.