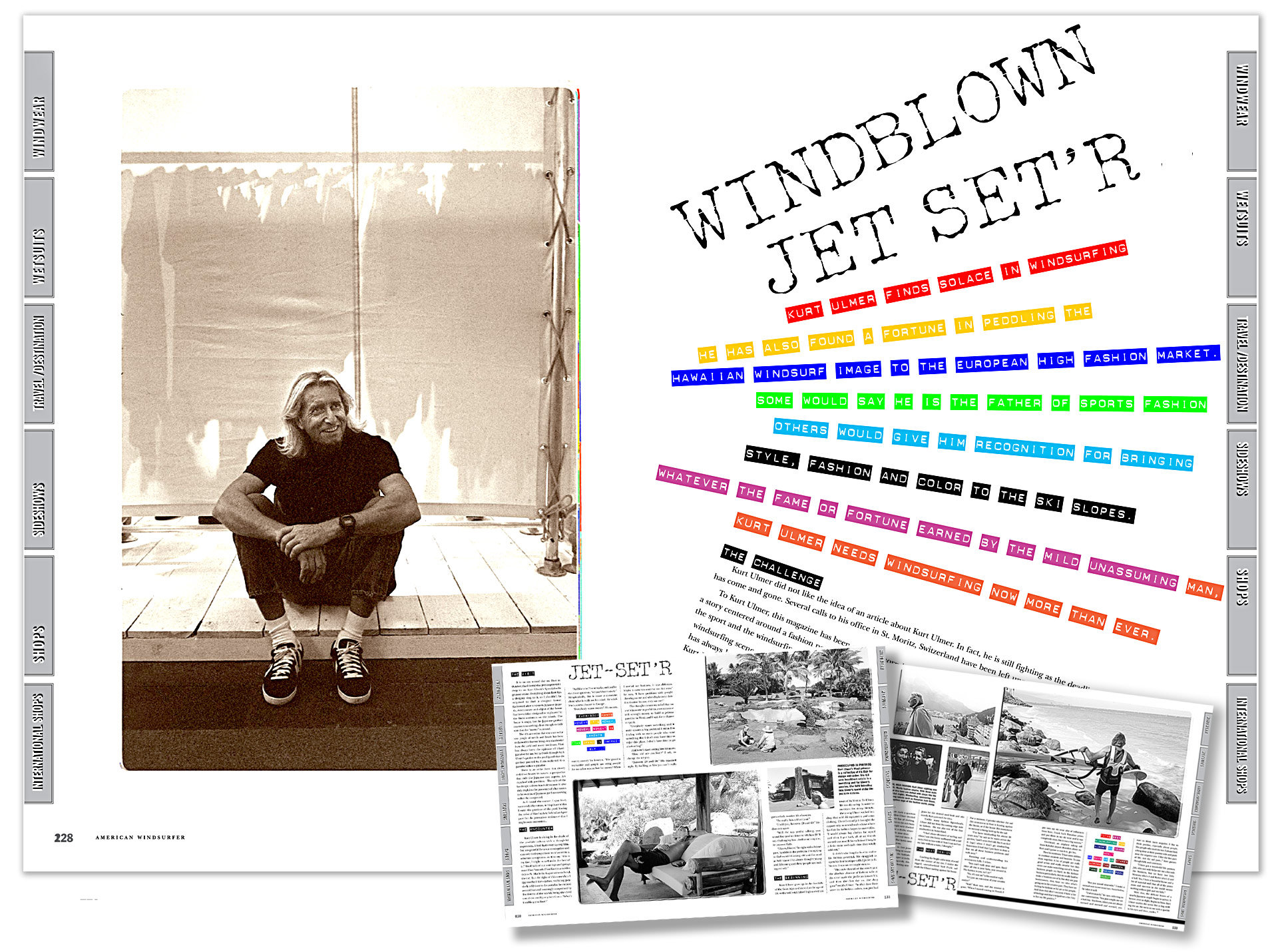 Kurt Ulmer did not like the idea of an article about Kurt Ulmer. In fact, he is still fighting as the deadline of this issue has come and gone. 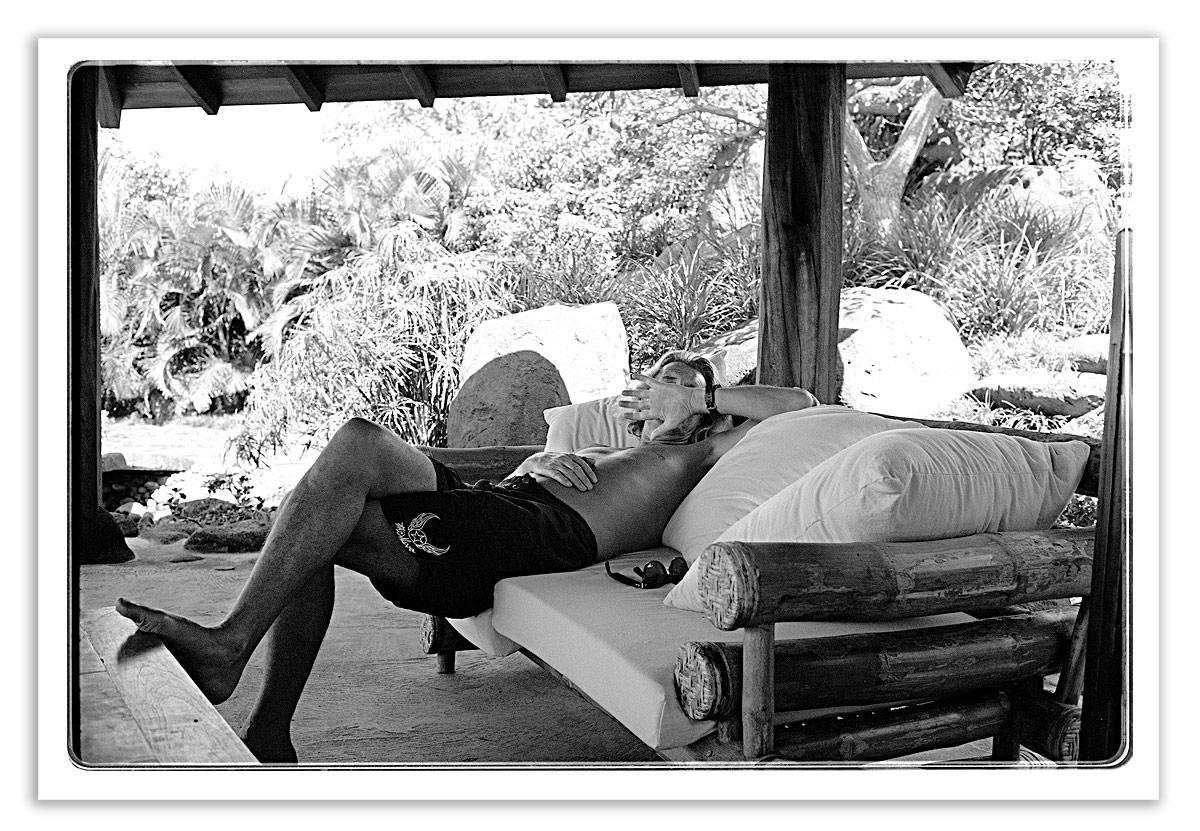 KURT ULMER find solace in windsurfing:  He has also found a fortune in peddling the Hawaiian windsurfing image to the European High Fashion market. Some would say he is the father of Sports Fashion. Others would give him recognition for bringing style, fashion and color to the ski slopes.  Whatever might be the fame or fortune earned by the mild unassuming man. Kurt Ulmer needs windsurfing now more than ever.

Kurt Ulmer did not like the idea of an article about Kurt Ulmer. In fact, he is still fighting as the deadline of this issue has come and gone. Several calls to his office in St. Moritz, Switzerland have been left unanswered.

To Kurt Ulmer, this magazine has been a major thorn in the flesh for the past two years. We fiddled with the idea of doing a story centered around a fashion personality who has made something out of his relationship with windsurfing. As a patron to the sport and the windsurfing lifestyle and a man who has played a major role in supporting and cultivating the professional windsurfing scene with his clothing companies, Jet Set, Blue Systems and The Wave,  Kurt Ulmer was our obvious choice. Ulmer has always been quite pleased to support our publication with Jet Set advertising pages, but when it came time to illustrate Kurt Ulmer’s success in American Windsurfer, the doors were shut tight in a charming and unpretentious Ulmeristic way. 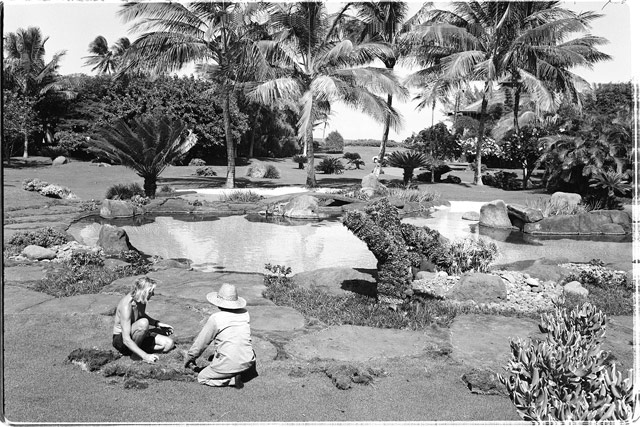 PREOCCUPIED IN PARADISE: Kurt Ulmer’s Maui getaway is a reflection of his flair for design. The styled landscape reflects Kurt’s demeanor for creative order. The 4.5 acre beachfront estate is also a launching pad for Ulmer’s windsurfing passion.

It is on my second day on Maui in October, that I (somewhat presumptuously) drop in on Ulmer’s Spreckelsville get away estate. Everything about Kurt has a designer ring to it, so I shouldn’t be surprised to find a designer house. Fashioned after a western Japanese pagoda, every corner and object of the house has been either designed or replicated by the finest craftsmen on the islands. The house is empty, but the Japanese gardner at the gate murmurs something clear enough to indicate that the “master” is around.

The 4.5 acre estate that was once a chaotic jungle of weeds and brush has been reclaimed for human living. As a mainlander from the cold and snowy northeast, Maui has always been the epitome of island paradise for me, but as I walk through Kurt Ulmer’s garden to the pool/pond that the gardner pointed to, I am awakened to a paradise within a paradise.

There is an order here that clearly redefines beauty in nature, a perspective that only the Japanese can express. Art matched with precision.  The style of the landscape reflects Kurt’s demeanor. It also duly explains the presence of what seems to be an army of Japanese gardners working within the compound.

As I round the corner, I spot Kurt, surrounded by nature, in his private realm. I enter the province of the pool, leaving the noise of Maui activity behind and prepare for the journalistic resistance that I might soon encounter…

Kurt Ulmer is sitting in the shade of the poolside cabana with a thoughtful expression. I feel bad interrupting him, but am grateful for a warm reception and can only feel sympathetic to what seems a reluctant acceptance, as if to say, “this is my fate, I might as well make the best of it.” Small talk of our comings and goings since I last “intruded” on Kurt in a sudden visit to St. Moritz in August serve to break the ice. But the sight of this man when I approached him earlier, reclining pensively, oblivious to the paradise he created around him and  seemingly compressed by the forces of the world, bring the devil out of me and I jump feet first— “What’s troubling you Kurt?”

“Well for one,” he remarks, unfazed by the direct question, “it hasn’t been windy.” Metaphorically, this is more a comment about what is really on his mind; the windless business climate in Europe.

“Everybody wants money! It’s money, money, money” he laments. “The greed is incredible and people are suing people for no other reason but for money! When I started my business, it was different. Maybe it came too easy for me. But now,” he says, “I have problems with people cheating on me and when I take away their distribution license, they sue me!”

The thought crosses my mind that no one is immune to problems, even someone with enough money to build a getaway paradise in Maui, and I wait for a chance to speak.

“Everybody wants something and it really creates a big problem! I mean I’m dealing with so many people who want something that I don’t even have time to enjoy this place. I don’t have time to go windsurfing!”

And here I stand, asking him for more. “How old are you Kurt?” I ask, to change the subject. “Between 20 and 60.” His standard reply. By looking at him you can’t really guess which number it’s closest to. “No really, how old are you?”

“I told you, between 20 and 60!” He does not waver.“Well the way you’re talking, you sound like you’re closer to 60 than 20” I say, challenging him. And to my surprise, he answers flatly.

“I know, I know,” he sighs with obvious pain, “and this is the problem. I’m starting to find myself thinking old and I’m mad as hell ‘cause I’ve always thought young and felt young and these people are making me old.” 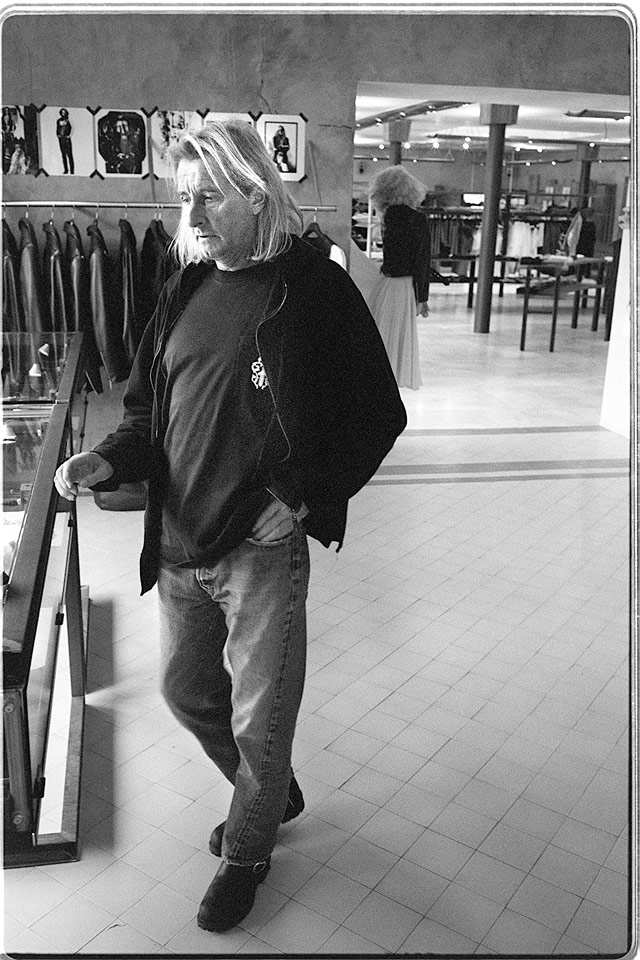 HIGH ALTITUDE, HIGH FASHION: Kurt Ulmer sighting new directions for his St. Moritz fashion empire. With three main lines, the streets of this town are dotted with shops like the one seen above for Jet-Set.

Kurt Ulmer grew up in the foothills of the Swiss Alps and moved at the age of 16, to the well established high-society ski town of St. Moritz. To Ulmer, life was ski racing. In order to maintain his skiing lifestyle, the young Ulmer worked in a shop that sold ski equipment and some clothing. Ulmer’s retail job brought the opportunity to attend trade shows where his flair for fashion began to materialize. “I would always buy clothes for myself and when I got back, all of my friends wanted one as well. So each time I bought a little more and each time they totally sold out.”

It didn’t take long for Kurt to realize his fashion potential. He struggled to open his first boutique called Jet-Set in St. Moritz. It was an overnight success.

“The rich clientel of the resort and the absolute absence of fashion style at the time made the Jet-Set an instant hit, and from the first day on, the shop grew” recalls Ulmer. “At that time there were no ski fashion colors, you just had black, blue and red.”

The Jet-Set boutique made a quantum leap toward success when Ulmer decided to manufacture his own line of clothing, introducing 20 new colors to the rich Swiss slopes. Initially, some people were shocked and insulted, but without a doubt, winter fashion has never been the same since.

His flair for style did not end there. A line of clothing called the Blue System came out of Ulmer’s passion for jeans.

“My aunt would send us Levi jeans from America and the first thing we would do was to sit with them in the bathtub. Then we started to rub sandpaper or rocks in areas of the jean.” Consequently, this gave Ulmer the idea of sandblasting new jeans for the desired used look and ultimately, Kurt patented the idea.

Unlike many fashion figureheads, Ulmer did not limit his cutting edge style to fashion.  He was also one of the first windsurfers in Switzerland.

“I had always dreamed of surfing and when I saw this funny surfboard with a sail on it, I felt in love with it! Now I can surf on my lake without a wave, I thought.”

Catching the bright color trim of a sail from the corner of my eye, I notice the rigged, one–of–a–kind Neil Pryde sail made for Ulmer waiting against his house. For a moment, I ponder whether the sail (his monument to fun) is leaning against the house, or if the house (his monument to success) is being held up by the sail.

“I’ve been windsurfing for almost 20 years now,” he says as he stares across the garden, “and I never feel old. But I can feel it when I don’t go windsurfing.  Sometimes I feel that I just have to draw a line on all these business problems and walk away.”

“I’ve been windsurfing for almost 20 years now,” he says as he stares across the garden, “and I never feel old. But I can feel it [age] when I don’t go windsurfing.  Sometimes I feel that I just have to draw a line on all these business problems and walk away.”

Knowing and understanding his sentiments fully, I relate. “You can’t walk away and quit, Kurt! After all this is your baby, you created it. The fashion is you, isn’t it?”

“It’s just an extension of your creative outlet then.”

“Yeah” Kurt says, and the tension is gone. “When I started coming to Hawaii, I put into my ski wear a lot of influences from here. I took back Hawaiian prints and put them in my ski wear and it was completely crazy, but it was a big success.”

Overhead, an airplane taking off from Kahului airport thunders above us. Kurt and I pause to watch it…Jet Set.

Windsurfing (from his back yard on Maui), sponsoring, and associating with young talents such as Hawaiian Josh Stone, keeps this ageless sage of the fashion world — young.

Then he continues. “I have some abilities to combine creativity and business. To mix them together. A lot of people are really good artists and really creative but they never can make something out of it. Some business people try hard, in the fashion business particularly, they try really hard to make a business out of it, but they are just businessmen, they have no idea what’s going on in the creative part. They have no feeling for fashion or for art or for people. And then they don’t succeed. I have a lot of feelings and that’s helped me a lot. I try to live my life positive.”

“But you sound miserable.” I make a mental note to use more tact. Nonetheless, he takes it well.

“Unfortunately,” he says, referring to our conversation, “You just caught me on a bad day.  You know, when you are always stressed and stressed and stressed, you start to think more negative. I like to think positive, especially about people, like people who work for me. I always look a long time at their positive side and push away the negative one. I like the fun part of life, not the sad part…” Kurt pauses thoughtfully and continues.

“I have got a wonderful life partner, Juli, who not only helps me out a lot with the business, but we have two kids, Montana who’s 4 and Ryder who’s 2 and a half. Yes, I have a beautiful home and a lot of material stuff, but all of the possessions and success in the world means nothing without Juli and the kids.”

With that, the delicate leaves of a nearby Japanese maple begin to quiver. A breeze, ever so slight, begins to blow. Kurt Ulmer studies the scene like a dog sniffing the air. He turns to me with a sparkle in his eyes and then…smiles.