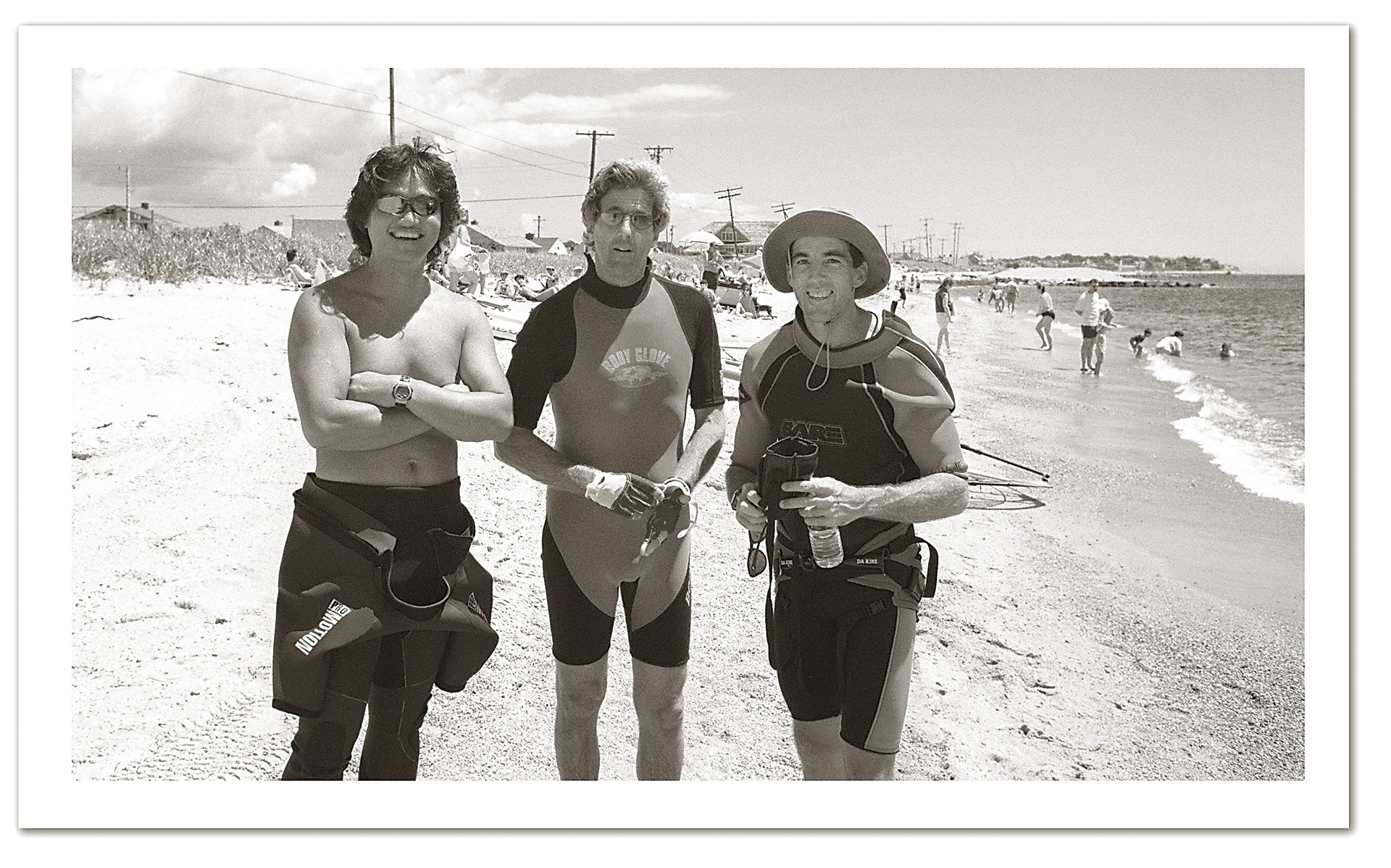 TOP GUNS: Chao, Kerry, and Sayre are dressed for success and ready to drift to Nantucket.  LIVING ART: Douglas Faulkner in his studion in NYC and Gavin Grow at peace in Pensacola (bellow).

SOMEBODY HAS TO DO IT.”Remarked Publisher/Editor John Chao. The tough job he was referring to was trying to keep up with the indomitable Junior Senator from Massachusetts—this issue’s cover windsurfer—Senator John Kerry.

Not only did the chief of American Windsurfer Magazine keep up with the remarkable Senator, his report entitled The Windsurfer Who Could Be President represents a new benchmark in our collective effort to bring you great stories.

A year’s worth of toil and zillions of dollars went into this article. We clearly out–budgeted the makers of Titanic in bringing you this extraordinary portrait of a man, navigating through the forces of life.

But even after the article and the interview were completed and laid to type, the Senator, whom the publisher refers to as the Teddy Roosevelt of our times, called for a new challenge. One day short of a full year since their first encounter, the Senator and the Publisher windsurfed from Cape Cod to Nantucket. Even though the forecast called for marginal wind, the two windsurfers along with Nevin Sayre, the great grandson of Woodrow Wilson and a windsurfer legend around Martha’s Vineyard, took to the waters off Falmouth Beach. With them was the Senator’s good friend Bruce Droste, serving as safety escort on his powerboat.

The drama that unfolded after leaving shore might be a great article someday. An article about how the wind died completely. About how the team lost their chase boat and couldn’t easily abandon the crossing by motoring home. About how just when they thought nature had defeated them, an amazing wind came out of nowhere and blew the trio to Nantucket. To the three tired and hungry windsurfers, the six and half hour trip was an extraordinary study in the art of synchronicity—how events sometimes come together to deliver an achievement worthy of reflection.

For publisher/editor John Chao, who brings his photographs and his observations of the Senator to this issue, the year that it took him to capture the story was filled with serendipity and amazing coincidences. A year that can give any WindMaker a deep sense of affirmation.

What you make out of life is hidden in your attitude. If this isn’t an old saying, it should be. In this issue, two of our WindMakers help illustrate this point. First, Gavin Grow, a windsurfer from Pensacola Florida who has drawn one of life’s most tragic cards. A motorcycle accident ten years ago had left him paralyzed, homeless, and in many ways, loveless. But the triumph of the spirit can be celebrated when we read his first written article entitled, Beached. It is a remarkable story about how powerful life can be when the spirit rises above the ashes and fills a broken body  with unforeseen possibilities.

Possibilities abound when you’re interested in the sea. That’s where photographer Douglas Faulkner seems to find inspiration. American Windsurfer is proud to present “Dancing Waters,” the first in a series of four poetic articles by the renowned photographer and poet. You may remember Faulkner from Volume 2 Issue 1 when he presented his take on Ho’okipa in black and white. Four years later, the colors of life are revealed in Faulkner’s work. These pictures were taken not without a struggle. The strength and power of the images hide the chaotic state of a man burdened by manic depression. Though this affliction has disrupted Faulkner’s life, his work—the lifeblood of his existence—is an example of how greatness can often be found in the depth of human desperation and isolation.

Finally, American Windsurfer’s Senior photographer Darrel Jones appears at length in this issue. His photographs, ranging from the relevant (windsurfing) to the anthropological, are a testament to the artist’s fantastic eye.

Our WindMakers flow from all direction!