Sailing the flat waters off Fishermen’s Huts can get tedious… 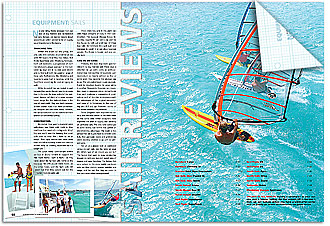 THE BEST OF ALL WORLDS: Having a catamaran at your service was a luxury. Sailing the flat waters off Fishermen’s Huts can get tedious unless you have a windsurfer-carrier and can boldly go where no windsurfer has gone before.

NO OVER-RIDIN THEME emerged from our test of big freeride and recreational race sails. Instead, we learned lessons about several issues which seemed to be of roughly equal importance to the testers.

Truncated Tips:
Within this issues sail test group, the only sails with radically unconventional tips were the Gaastra Total Flow Free Slalom, Neil Pryde SuperSonic and Windwing Synthesis. Each sail represents a progression of each manufacturer’s unique approach to the truncated tip issue and in no case were testers able to find fault with the speed or range of these sails. Furthermore, the Windwing and SuperSonic rated high in handling, while the SuperSonic scored big for ease of rigging as well.

THE BEST OF ALL WORLDS: Having a catamaran at your service was a luxury. Sailing the flat waters off Fishermen’s Huts can get tedious unless you have a windsurfer-carrier and can boldly go where no windsurfer has gone before.

While truncated tips are touted in part because they permit the sail head to be wider than in the past, the more radical of the truncated designs fall short of a more conventional design like the Sailworks Retro in the way of head width. They also don’t necessarily have shorter masts than more conventionally designed sails with wide heads. However, the radical truncated tips do seem to be more tolerant of non-perfect tuning.

Construction:
No matter how good a material some sailmakers may think x-ply cloth is, they don’t use that much of it in big sails. Why? Big sails don’t take the beating that small sails take so they don’t have to be as tough. That x-ply weighs and costs more than monofilm certainly enters the formula as well. After all, a heavy, expensive sail is a tough sale.

The great many light-weight testers we had in Aruba tended to support the Neil Pryde motto “Light is Right,” as they raved about the lightest sails. Some of the big guys, like 195-pound Glenn Fuller, on the other hand, said the light sails felt great but that they would opt for the heavier more durable sails.

There were two sails in this year’s test with major amounts of x-ply in their construction: The Aerotech Ultimate Slalom III, sporting roughly 50 per cent x-ply and the Hot Fusion XL with just a bit less. Of these two sails, the Ultimate III is well built and manages to weigh in at just about average weight. The Fusion is heavier and very solidly built. 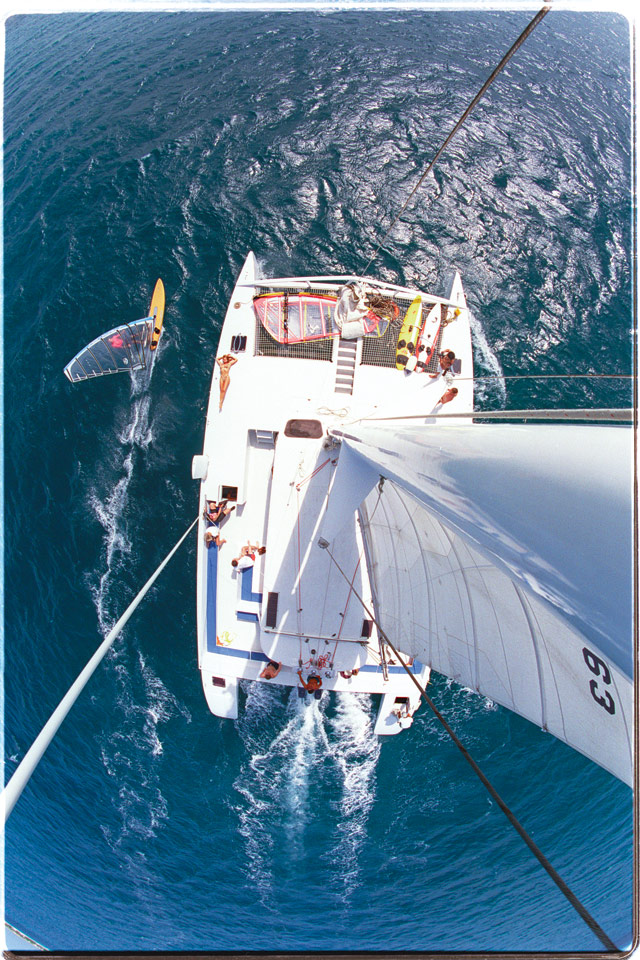 Probably the most important question relevant to big freeride sails these days is whether to go with cams or without. Sometimes windsurfing innovations gain momentum as they’re refined so that at some point they become the obvious way to go. The adjustable boom is one example. Eight- to nine-foot boards for wave sailing is another. Frequently, however, an innovation spurs a response along conventional lines and produces a conventional product—a sort of counter innovation—with the advantages of the original innovation and none of its limitations. In the case of big sails (6.0 and up), however, neither of the above scenarios has prevailed. 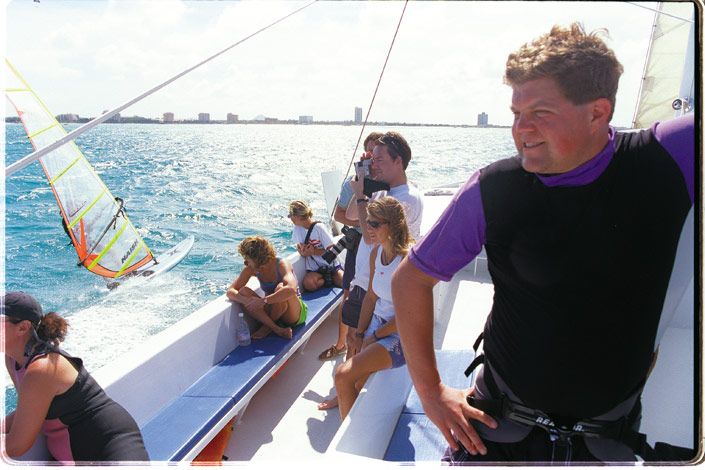 Some designers have improved the stability and low-end power of no-cams while at the same time other designers have improved the ease of rigging and handling of cambered sails. The two have converged to some extent, but neither has gained an overwhelming advantage. The result is that prospective sail buyers have to consider carefully their particular needs and preferences when deciding whether to go with or without cams.

For an at-a-glance look at cambered versus no-cam sails, see the table on page 63. Which type of sail should you opt for? The factors that seem to sway windsurfers toward no-cams are, top-end speed, ease of rigging and easy handling. The factors that send others to the more stable cambered sails are their slightly greater stability and range, and the fact that they are easier to trim accurately when underpowered.

Cams vs. No-cams
One rule of thumb is that big, no-cam sails are less popular than smaller, no-cam sails. Thus, while you may be happy with a 6.0 no-cam, you may prefer a cambered sail when you get an 8.0 or bigger.

Ease of Rigging
Don’t just assume that all cambered sails are a little (or a lot) harder to rig than a no-cam. Some are harder while some are about the same.

Handling
A cambered sail can rotate almost transparently and some no-cams are a bit sticky in sleeve rotation because of their extreme luff curve. However, no cambered sail is as easy to luff and throw around as a no-cam. The cams force static draft into the sail and this draft makes the sail hard to luff. The stronger the wind, the harder the cambered sail is to handle. Also, in light-wind situations where balance can be a problem, easy-rotating camless sails are, again, significantly easier to handle than cambered models.

Acceleration
There’s considerable agreement that no-cams pump well and accelerate well from a stop. Their power, while being pumped, probably stems in part from the flexibility inherent in the soft, no-cam construction. This low-end power advantage may also result from the fact that no-cam sails tend to have a draft-back shape when under-powered, while cambered sails tend to have a less powerful draft-forward shape. In any case, the nod for acceleration from a stop goes to no-cams.

Power
When it comes to powering a board on a broad reach or through a lull, the cambered sail has the advantage. Its fuller leading edge promotes attachment of  wind flow for good power at high angles of attack. The draft-forward shape that it takes on when underpowered has shifted back by the time it’s powered, so when the time comes for gliding through a lull, the cambered sail has the advantage of a deep draft without the disadvantage of the draft being distributed too far forward. The fact that a cambered sail doesn’t have to be outhauled flat for good stability also gives it the draft it needs to power well through a lull.

Stability and Range
The cambered sail is inherently more stable because the fronts of the battens aren’t free to move fore and aft as the wind changes. However, when outhauled flat a no-cam sail easily has the stability to equal that of a cambered sail. It won’t have quite the range, though, because when rigged for stability it won’t have the depth of draft of a cambered sail. To increase the range of a no-cam sail to the absolute maximum possible, you simply rig it flat and sail it in a bunch of wind.

Top-end Speed
It’s in extremely powered conditions that the no-cam’s top-end speed really shows. These sails can be so flat and drag-free that pro-level cambered sails feel slow by comparison. This translates into not only great top-end but also excellent acceleration from a high speed to a higher one.