He was a competitor in three Olympic Games, winning the Gold in Pusan and the Bronze in Los Angeles. 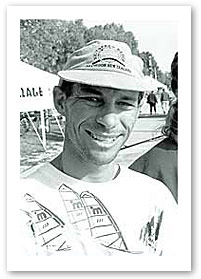 Retired Olympic legend Bruce Kendall is in a unique position to comment on the current debate on replacing the Mistral IMCO with the Formula class for the Olympics. He was a competitor in three Olympic Games, winning the Gold in Pusan and the Bronze in Los Angeles. He now sits on the side lines, concerned the sport’s Olympic days may be numbered if a change takes place.

I SHOULD POINT OUT right at the start that having hung up my boom for the final time following the New Zealand Olympic trials this year and now moving into keelboat sailing, I have no vested interest in this debate. My motivation is simply a deep concern for the sport that has been my life for the last twenty years. I firmly believe if we don’t get equipment selection right for future Games, we may see our sport disappear from the Olympics by 2008.

I can appreciate the push by some for change to the Formula Class—it’s fast, fun, and growing in popularity, some would say it’s windsurfing in its most contemporary form. However, this does not automatically make it the right animal to take into the Olympic arena.

It’s a complex issue in which the following points need to be considered: a zero to thirty-knot versatility is vitally required.

As part of the sailing discipline in the Olympics, races must be sailed in the same location, times, and conditions as the other Olympic sailing classes. Usually, these locations produce light and shifty breezes that require a long board for fair, good quality fleet racing.

Looking ahead, Athens may only provide two to ten knots of wind. Imagine the embarrassment for our sport if there was no result, or if we sat on the beach while all the other classes sailed. And that’s before we considered the difficulties waiting for wind will create for the television networks.

Consider also that we frequently have to race and train safely many miles out at sea, with one sail, no support boats, and with the wind varying between zero and thirty knots. The Mistral is versatile enough to do this. Formula equipment is not.

Simplicity has enormous advantages.
It is the versatility of the IMCO that has meant one set (one board, sail, mast, boom, etc.) of equipment that can be used in all conditions by all sailors, male, female, and youth.

This has huge advantages: it’s inexpensive to buy and travel with; it’s readily available in most corners of the globe; sharing and tuning between sailors is also made easier, which further helps to create a more level playing field come race day. Sailors don’t need to worry about equipment, just about becoming great sailors.

While the above points make the IMCO attractive to all Olympic sailors, a key benefit is the way the simplicity and affordability of the class have allowed developing and isolated nations to participate—and with great success. Tony Philip from Fiji is a good example.

Fleet numbers in all countries have been bolstered by the ability for youths and new racers to obtain second-hand equipment that still has plenty of life left in it for low cost. The International Mistral Class Organization has been successfully helping to redistribute the second-hand equipment globally. The best athlete wins.

The Olympics is about testing the athletic prowess and mental toughness of human beings, not equipment development, which undoubtedly is a key component of success in the Formula Class. The more that equipment becomes a factor, the less chance we will see the best athlete win. Surely the competitors who dedicate their lives in the pursuit of a gold medal deserve an even playing field.

This one design aspect is also better for our public image. People can relate to the best athlete winning, because that’s the way it goes in most other Olympic sports, ideally. A final thought, look at other yachting classes and see which are the strongest globally—no coincidence it’s the one design class.

In yachting terms, windsurfing has some key advantages. We need to keep them.
It’s important to remember that windsurfing’s place in the Olympics is as a yachting class. Any decisions concerning it’s future will be made with the other classes in mind. One day the yachting class might be asked to reduce the number of classes for cost or logistical reasons, so we need to hold on to the advantages we have, like affordability, our strict one design tolerances, excellent global participation, and easy race management. If we can hold onto these advantages, hopefully, we won’t get the chopping block.

To remain in the Olympics, the developing nations hold the key for boardsailing

I’m repeating myself here because it is important. If the Olympic Class is changed to Formula Windsurfing, we could see smaller countries drop out of the sport. With the increased cost of equipment and transporting it, the difficulty of keeping up with the latest gear, and the problems with training and tuning due to their isolation, suddenly it will just be too hard. Kids with Olympic sailing dreams will see the Laser as a better alternative. Once these nations begin to drop out, the Olympic Committee will undoubtedly question windsurfing strength as a global sport, and therefore, it’s place in the Olympics.

Does it matter if it is not the fastest board?

The Mistral One Design is not the fastest windsurfer around, but is that so important? Compared with all the other Olympic yachting classes, the Mistral is the third fastest and a more versatile performer than Formula equipment (imagine watching a Formula race in four knots). Compared with these points raised, a few extra knots of speed in certain conditions seem pretty inconsequential. The on the water skills needed to do both well are identical—great tactics, great technique, and great fitness.

We’ve got a good thing going
The stability and profile the Mistral board has brought to Olympic windsurfing have resulted in many sailors receiving strong funding support from their respective governments. Media profile has also built strongly as journalists come to understand and respect just how physically and mentally demanding our sport is. The class organization is now very strong worldwide and the manufacturing tolerances are excellent.

In contrast, Formula racing is still in an embryonic stage. It needs to prove itself, iron out the bugs and become a worldwide force in its own right to be worthy of consideration. Perhaps, in time, a one design formula style class will develop and become the next Olympic contender. I am not against change in the future at all, it’s just that now does not seem a logical time for it.

In summary, I get the feeling that many of the vocal proponents of a change to Formula are motivated by what’s in it for them or the windsurfing industry. However, the whole idea behind the Olympics is that it’s for the athletes. And these athletes represent the world of windsurfing to the world.

Just picture yourself as a hungry eighteen-year-old with an Olympic dream from a modest or average background. You just want to sail, train, travel, and compete against the world’s best and learn, become the best athlete you can be. Unfortunately, you have to spend so much money on equipment—not just the stuff you race with, but also, the stuff you had to buy just to find out if it was fast or not—that you can only travel overseas to one regatta a year. That is not enough. At home, it’s hard to hone your technique with your buddies because you’re riding different boards, testing fins, etc. And when you turn up to a regatta, someone is always one step ahead of you with gear. You can’t quite crack it. It’s too hard. You run out of money. Your parents run out of money. You give up your dream.

This doesn’t sound like it’s for aspiring athletes to me.