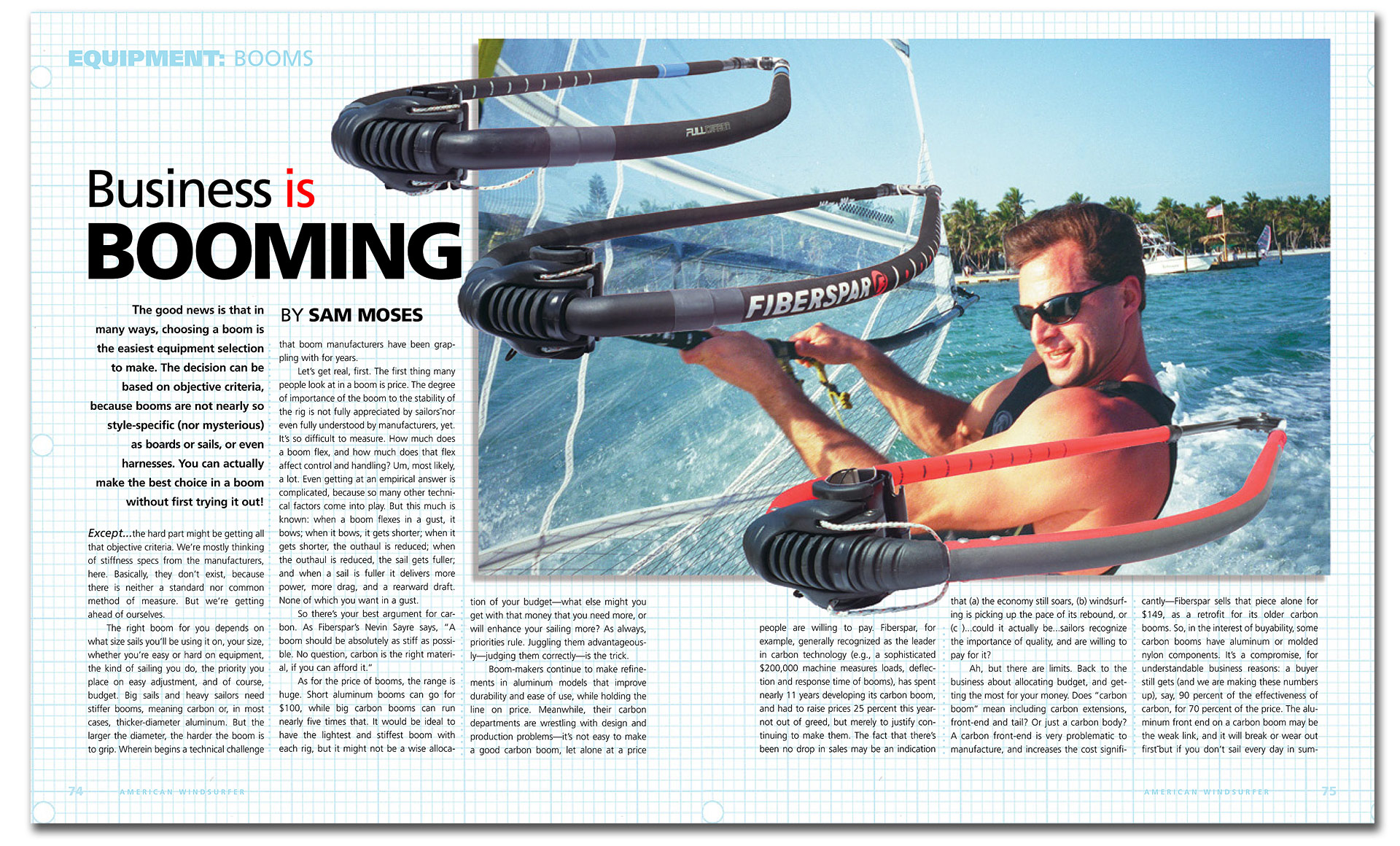 You can actually make the best choice in a boom without first trying it out!

The good news is that in many ways, choosing a boom is the easiest equipment selection to make. The decision can be based on objective criteria, because booms are not nearly so style-specific (nor mysterious) as boards or sails, or even harnesses. You can actually make the best choice in a boom without first trying it out!

EXCEPT…the hard part might be getting all that objective criteria. We’re mostly thinking of stiffness specs from the manufacturers, here. Basically, they don’t exist, because there is neither a standard nor common method of measure. But we’re getting ahead of ourselves.

The right boom for you depends on what size sails you’ll be using it on, your size, whether you’re easy or hard on equipment, the kind of sailing you do, the priority you place on easy adjustment, and of course, budget. Big sails and heavy sailors need stiffer booms, meaning carbon or, in most cases, thicker-diameter aluminum. But the larger the diameter, the harder the boom is to grip. Wherein begins a technical challenge that boom manufacturers have been grappling with for years.

Let’s get real, first. The first thing many people look at in a boom is price. The degree of importance of the boom to the stability of the rig is not fully appreciated by sailors˜nor even fully understood by manufacturers, yet. It’s so difficult to measure. How much does a boom flex, and how much does that flex affect control and handling? Um, most likely, a lot. Even getting at an empirical answer is complicated, because so many other technical factors come into play. But this much is known: when a boom flexes in a gust, it bows; when it bows, it gets shorter; when it gets shorter, the outhaul is reduced; when the outhaul is reduced, the sail gets fuller; and when a sail is fuller it delivers more power, more drag, and a rearward draft. None of which you want in a gust.

So there’s your best argument for carbon. As Fiberspar’s Nevin Sayre says, “A boom should be absolutely as stiff as possible. No question, carbon is the right material, if you can afford it.’’

As for the price of booms, the range is huge. Short aluminum booms can go for $100, while big carbon booms can run nearly five times that. It would be ideal to have the lightest and stiffest boom with each rig, but it might not be a wise allocation of your budget—what else might you get with that money that you need more, or will enhance your sailing more? As always, priorities rule. Juggling them advantageously—judging them correctly—is the trick.

Boom-makers continue to make refinements in aluminum models that improve durability and ease of use, while holding the line on price. Meanwhile, their carbon departments are wrestling with design and production problems—it’s not easy to make a good carbon boom, let alone at a price people are willing to pay. Fiberspar, for example, generally recognized as the leader in carbon technology (e.g., a sophisticated $200,000 machine measures loads, deflection and response time of booms), has spent nearly 11 years developing its carbon boom, and had to raise prices 25 percent this year-not out of greed, but merely to justify continuing to make them. The fact that there’s been no drop in sales may be an indication that (a) the economy still soars, (b) windsurfing is picking up the pace of its rebound, or (c )…could it actually be…sailors recognize the importance of quality, and are willing to pay for it?

Ah, but there are limits. Back to the business about allocating budget, and getting the most for your money. Does “carbon boom’’ mean including carbon extensions, front-end and tail? Or just a carbon body? A carbon front-end is very problematic to manufacture, and increases the cost significantly—Fiberspar sells that piece alone for $149, as a retrofit for its older carbon booms. So, in the interest of buyability, some carbon booms have aluminum or molded nylon components. It’s a compromise, for understandable business reasons: a buyer still gets (and we are making these numbers up), say, 90 percent of the effectiveness of carbon, for 70 percent of the price. The aluminum front end on a carbon boom may be the weak link, and it will break or wear out first˜but if you don’t sail every day in summer, it might last for years, and there’s not that much lost in stiffness. It’s a reasonable way to save a few bucks.

Chinook addresses the problem of flex vs. price another way. The Competition boom-front on carbon booms is made of durable molded nylon, whose inherent flexibility is compensated for by an extremely close positioning of the front ends of the boom tubes. They’re 1/8’’ apart, limiting the boom-front flex area to that small space. Chinook has experimented with a carbon front-end, but ruled it out, for now, as impractical for a number of reasons.

A word on innovation. Carbon is where it’s at, of course, and continuous-loop carbon booms will be the Next Big Thing. If Fiberspar and Chinook have their own solutions to flex in the the front-end, Windsurfing Hawaii’s solution is to throw out the piece altogether˜or at least eliminate the connection of boom tubes. The new WH carbon boom is an unbroken, unbonded loop around the front of the boom, with an  articulating front-end that, because its only job is to clamp the boom to the mast, isn’t subject to flex. When this boom begins appearing in shops, any day now, you’ll find that the Dynafiber looks remarkably similar. That’s because there was a merging of talents and resources along the path of production. The design itself came from the hands of Bob Craig, formerly of Dynafiber, and Larry Stanley, who partnered Windsurfing Hawaii out of his garage 25 years ago, and is known for inventing the harness and lines, footstraps, adjustable booms and adjustable bases. He’s since sold his interest in Windsurfing Hawaii, recently relocated to Hood River, but he still designs and consults for them. “The well isn’t dry yet,’’ he laughs, during this, the summer of his 25th anniversary as a pioneer of windsurfing parts.

When Bob Craig sold his interest in Dynafiber, Brian Dalby of Windsurfing Works (Dynafiber’s distributor) took over the design and ran with it to Slovakia, where Thermal Laminates makes Seatrend boards and Dynafiber booms. After Dalby’s execution and development, Dynafiber calls its version of the boom a “monococque,’’ applying a term commonly used  to describe racing car chassis.

There’s already been some delay in getting the boom out, due to changes that needed to be made to the early version, by both Windsurfing Hawaii and Dynafiber. And it’s too soon to pronounce either boom a winner, as is. But the concept can’t be denied. Witness North Sails, which has also recently introduced a continuous-loop carbon boom.

Another word here, on tube diameter. Presently, the description “narrow grip’’ is being used, without precise definition. Commonly, booms have tube diameters of 1 1/16” (27 mm), 1 1/8” (28.6 mm) and 1 π” (31.75 mm)˜or all three, in a taper˜but the diameter isn’t always clearly stated there in the shop. Chinook is a nice exception. Its product-line brochure, available at dealerships, reveals ‘99 boom details, including, notably, a new Alcoa alloy with a .005’’ thicker wall in the 29-mm (1 1/8’’) booms. As a result of the thicker wall, warranty claims at Chinook have dropped to nearly zero this year.

Which raises an interesting dilemma. The previous 29-mm Chinook aluminum booms were breaking only in the hands of heavier sailors (more than 160 pounds), for whom the Chinook 32-mm (1 π’’) booms were recommended, something which Chinook communicated to its dealers. But if the 29-mm booms are in the showroom, and a 180-pound sailor wants one because he’s read how much easier and less tiring they are to hang onto, how many dealers (especially in recent years’ lean times) are self-disciplined enough to risk an easy sale? And how do you make a warranty apply to body weight? A line in the ‘99 Chinook pamphlet settles the issue with the exclamation, “11/8’’ is no longer limited to lightweights!’’

Advances in aluminum and difficulties with carbon design and production notwithstanding, there are more carbon booms than ever this year; carbon is technological progress, after all. During our Islamorada clinic, we tried out carbon booms from Fiberspar, Neil Pryde (made by Fiberspar), Chinook and Windsurfing Hawaii, and aluminum from Chinook, Windsurfing Hawaii, Gulftech, Hawaiian Pro Line, Naish and North Sails. The observations within this report were provided by Ken Winner, who evaluated the booms.

FIBERSPAR
Fiberspar leads the pack with booms that are stiff, light, easy to adjust, and easy to attach. Its new, thoroughly-developed, all-carbon front end shows no signs of weakness, and the 30-mm PosiGrip boom was enormously popular at Islamorada, particularly among the women. Fiberspar had tested the 30-mm boom a few years ago, but found that, in the longer sizes, it flexed too much (by Fiberspar’s standards) with the aluminum front end.

Now the carbon front end is here, and sales are strong. An aluminum front end is still available in the shorter sizes, to bring the price down. There’s also a new, narrow carbon tail piece on all Fiberspar booms.

CHINOOK
Chinook maintains its reputation this year by producing some of the soundest booms on the market. They come in four sizes, with the longer two sizes—Slalom and Course—offering a huge two-foot range of adjustment.

There is the old Classic boom front, as well as the Competition boom front, available for both aluminum and carbon models. This front-end has an aluminum cleat for quick tension adjustment of the clamp, and also an enlarged friction pad to better protect masts. Tail pieces come in either aluminum or carbon. The lacing system of the carbon piece relies on a groove rather than threading through sheaves or pulleys.Boom length is adjusted with an external collar having a single stainless pin; in the carbon models, it sometimes has to be jiggled and tensioned for the hole to line up.

The carbon booms come in three sizes, spanning the range from 4’6’’ to 8’. All are tapered, with 29-mm tubes at the grip, thickening to 32mm toward the tail, for stiffness.

DYNAFIBER
Dynafiber has been working hard and fast on its new carbon monocoque boom. They didn’t have one ready for us to try at Islamorada, but we were able to check one out, and it looks good. There’s also a new carbon tail piece, which, like some other carbon booms, employs molded depressions rather than drilled holes for the external adjustment pins, increasing strength and stiffness.

WINDSURFING HAWAII
We tested two models from Windsurfing Hawaii: the popular aluminum Power Taper with its 1 1/16” grip, which tapers back to 1 π”, and the new continuous-loop carbon model., which uses an aluminum tail piece and the ‘’loop and go’’ outhaul system. The Power Taper’s external pin adjustment system is beefed up from last year, and slides smoothly. Tail pieces with 24 inches of adjustment range are available with the two longest booms.

GULFTECH
Gulftechs have always been just about the stiffest booms on the market, and this year’s aluminum booms are stiffer than ever. We had a hard time getting the new front-end clamp to grip the mast tightly, but Gulftech says it has since solved that problem. We found the push-pin adjustment system easy to use.

Neil Pryde
The Full Carbon Wave from Neil Pryde is made by Fiberspar, and identical except for the grip. You don’t absolutely have to have a boom this good on sails under 6.0, but you sure like it when you do.

North Sails
Though North Sails manufactures sophisticated, high-end products, North booms puts a priority on function and price. The aluminum Progression model offers good stiffness, average weight and excellent utility at a competitive price. The clamp is easy to use, and the external pin adjustment system is excellent.