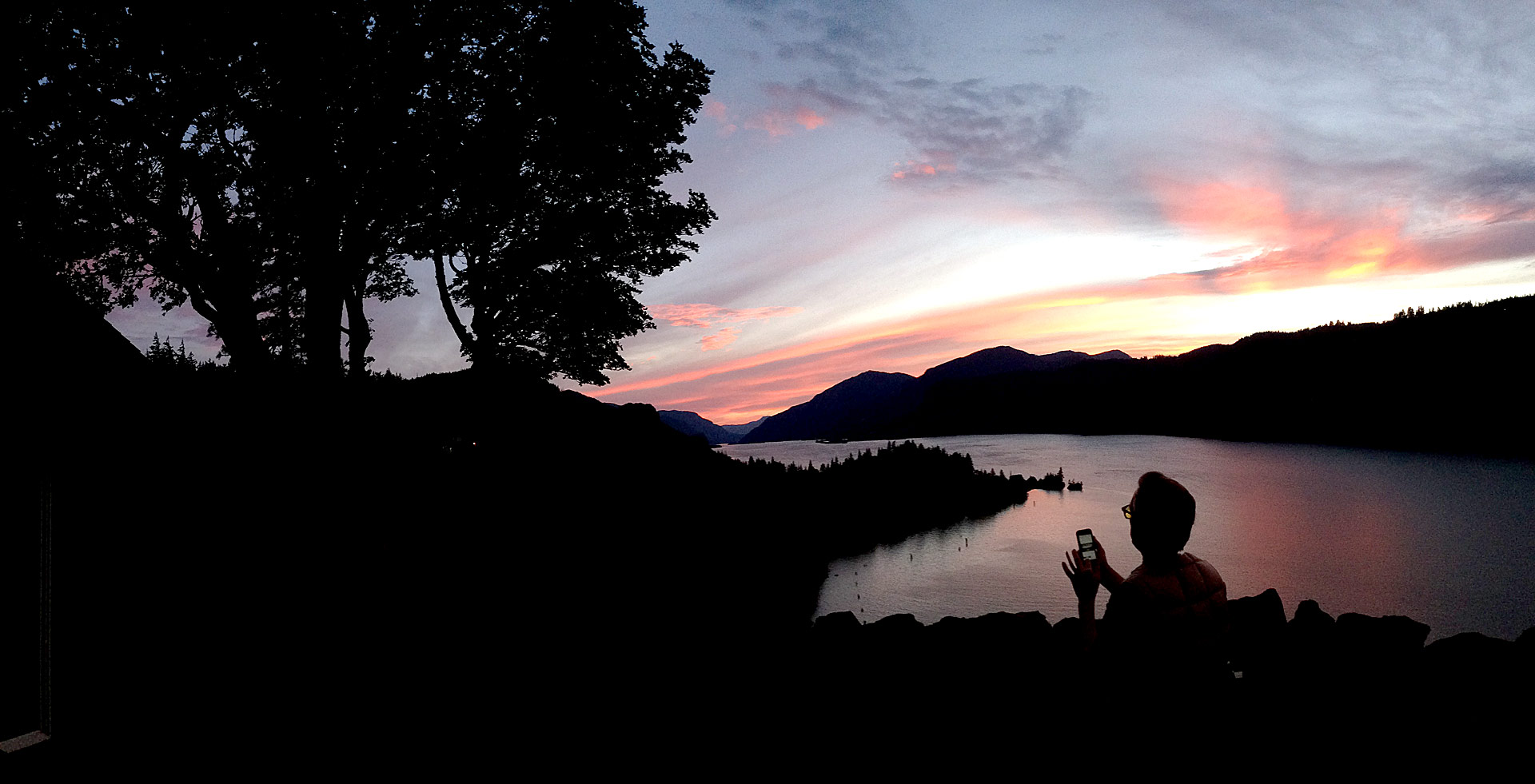 When Lewis and Clark first made their way down the mighty Columbia River, after having fought their way through the thick primeval forests, scrambled over the towering Cascade peaks, dragged themselves across the endless dusty plains of the Great Basin (whatever that was), their first impression was, “Yo, the Gorge! And nobody’s out! We’ve got the whole place to ourselves. Killer, dude!”

As they crested the golden ridge high above the thundering Celilo Falls and first peered down into the sapphire stained throat of the Columbia River Gorge, Lewis turned to Clark and cried, “Yo, dude, it’s nukin! Let’s rig up!”

Clark responded excitedly: “Nukin? What the hell is nukin? Did you get into the Peyote supply again?”

And, thus began the great exploration, migration, and ultimately, exploitation of the Great Northwest.

The Columbia River was the focal point for much of the early commerce between the fertile yet barren plains east of the central Cascades, and the lush forests and bustling seaports of the west coast. Which basically meant that Wilbur and Jethro, two dryland beet farmers living in Rufus, would hop on the family barge and pole their way westward to town on Saturday night for a bit of fun. They’d return several months later, having discovered that rivers flow faster in one direction than the other.

As hearty pioneers headed west along the river, they begat small settlements which gradually grew into villages. The villages begat towns, the towns begat cities, the cities begat suburbs (there was a lot of begatting going on back then), and gradually the suburban dwellers got sick of commuting and turned to farming instead. Farmers raised everything from rabbits to rutabagas in the rich Columbia Basin farmland, while boats and barges plied the river with important trading goods such as liquor, tobacco, and firearms. After a while there was only one thing conspicuously missing: women! Just where were all those desirable vixens who professed such willingness for adventure? Surely there were adventurous women somewhere.

Soon all the men turned to Lewis and Clark. “Hey, you got us out here and into this mess…” they complained, “and you promised us women! Where’s the dames?”

Lewis scratched his head. All his marketing surveys had indicated that if a large population of courageous young men headed west, a whole gaggle of delicate young women would soon follow. That, of course, is with an accuracy quotient of plus or minus 4%. What to do…

“I know!” Lewis exclaimed one day (they also did a lot of exclaiming back then.) “We’ll tell them women that it’s really fun out here. We’ll promise them they won’t have to work and tell them they can just spend all day driving boats back and forth across the river and we’ll tell them how easy it is. They can’t refuse!”

And so they came. A whole bunch of them!

“Wow!” exclaimed Clark. “It worked! There’s enough chicks here now for all the guys. This is great!”

And thus began the party. While the men toiled in the fields, the females went back and forth across the river, transporting all the important commodities like tobacco and liquor and firearms. One day one of the women had an idea. “Hey,” said one of them, “you’d think that with all them trees around here some of those stupid men woulda thunk to build a bridge across this here river so’s we delicate females wouldn’t hafta row these boats back and forth.”

Well sir, one of them men overheard that woman and before long all them bucks were busy cutting down every tree within a hundred miles so they could build a bridge across the mighty Columbia. Soon it became a race to see who could cut down the most trees first: the men on the south side. They all went nuts, inventing buck saws and skid lines and clear cuts until not a tree was left standing on either side of the river. The women just watched this frenzied activity with typical sarcasm. “Look at all those idiots,” one would crack. “They’ve cut down all the trees. Now where will we find to sit in the shade during our Sunday picnics?”

Meanwhile, all those men who had cut down all those trees had nothing more to do. One of them named Jonny suggested that they should perhaps replant some trees. Only problem was, they didn’t have any tree seeds. “I got a bunch of these little black seeds from my brother Bob in Boston,” one young fellow volunteered. “I don’t rightly know what they are, but we can plant ‘um anyway.”

All the rough and tumble men who had cut down all the big trees just laughed. “Them ain’t real tree seeds, you idiot. Them’s just apple tree seeds.”

Not to be discouraged, the young man spent the next five years planting the little black seeds everywhere he went. The barren hills rolling down to either side of the river were soon again covered with trees: fruit trees.

After that no one did much hanging around down at the river. For one thing, during the summer it was too windy. For another, they were too busy doing all the other things that there were to do like mountain biking, rollerblading, kayaking, and rock climbing.

But they did have a wonderful new bridge. “You know,” Lewis casually announced to Clark one morning while having breakfast at Bette’s in Hood River, “we should charge people to cross the river on our bridge.”

“Why on earth would anyone pay to cross the river?” Clark scoffed.

“Well, now when it’s free, no one wants to cross the river. But if it costs something, they’ll think there’s some reason to cross it and we’ll make lots of money.” Lewis replied.

“But what’ll we do with all the money we collect?” his skeptical compatriot continued.

“We’ll use it to invent windsurfing!” came the reply.

“How much do you think it will cost?” Clark inquired.

“Oh, probably several million dollars more than we can take in, if we let the government run it, or several million less, if we put Ross Perot in charge.” replied Lewis.

And thus windsurfing came to the Columbia River Gorge. Not content to simply begin on one side of the river and sail across plain to the other side, the windsurfers insisted on crossing the toll bridge several times each day, just like Lewis had predicted.

Now some of the locals (anyone who had lived in the area for more than a week) didn’t like the windsurfers. “Whut’n tarnation ar them guys doin’?” they would sneer. “Goin’ back n’ forth across the river all day long like a bunch of confused geese come Indian summer…Idiots!”

But then a few settlers took up windsurfing themselves and before long the river was alive with custom oak boards sporting canvas sails colorfully dyed using local juniper and dogwood berries. Local business owners would shut down their livery, dry goods, mercantile, and blacksmithing businesses whenever the wind was blowing and head for the water. It was not uncommon to hear talk of new bottom shapes or camber designs while gathered around the spittoon and drinking whiskey at the north end of the bar down at the River City Saloon.

Indeed many of the local establishments actually became involved in the business end of the sport. Each night the kerosene lights would glow late into the evening as Darvil Dingking would whack away at his anvil making new fin designs in his blacksmith shop. Even the Reverend Futstrapp from Our Lady of the Gorge congregation could be found moonlighting at his treadle sewing machine making custom Kneel Pride sails.

Yes, windsurfing breathed new life into the western wilderness. Some people found wealth and wind beyond their wildest dreams; others returned home, broke and disheartened. The California Gold Rush of 1849 was nothing compared to the Gorge Wind Rush of 1829!

Soon the bridge was taking in several pfennigs a year. Lewis and Clark became millionaires, retired, and moved to the coast where they settled in Astoria to write history books. They left out the part about the early windsurfers, not wanting to disclose the secret of their wealth.

Instead they gave themselves credit for exploring the entire western United States; founding the great cities of San Francisco and Seattle; and starting Microsoft© (which they then traded to Bill Gates for several beaver pelts and some colorful beads). Little did they know way back then that the importance and influence of windsurfing would eclipse all these other supposedly more important discoveries. Sometimes you just never know…