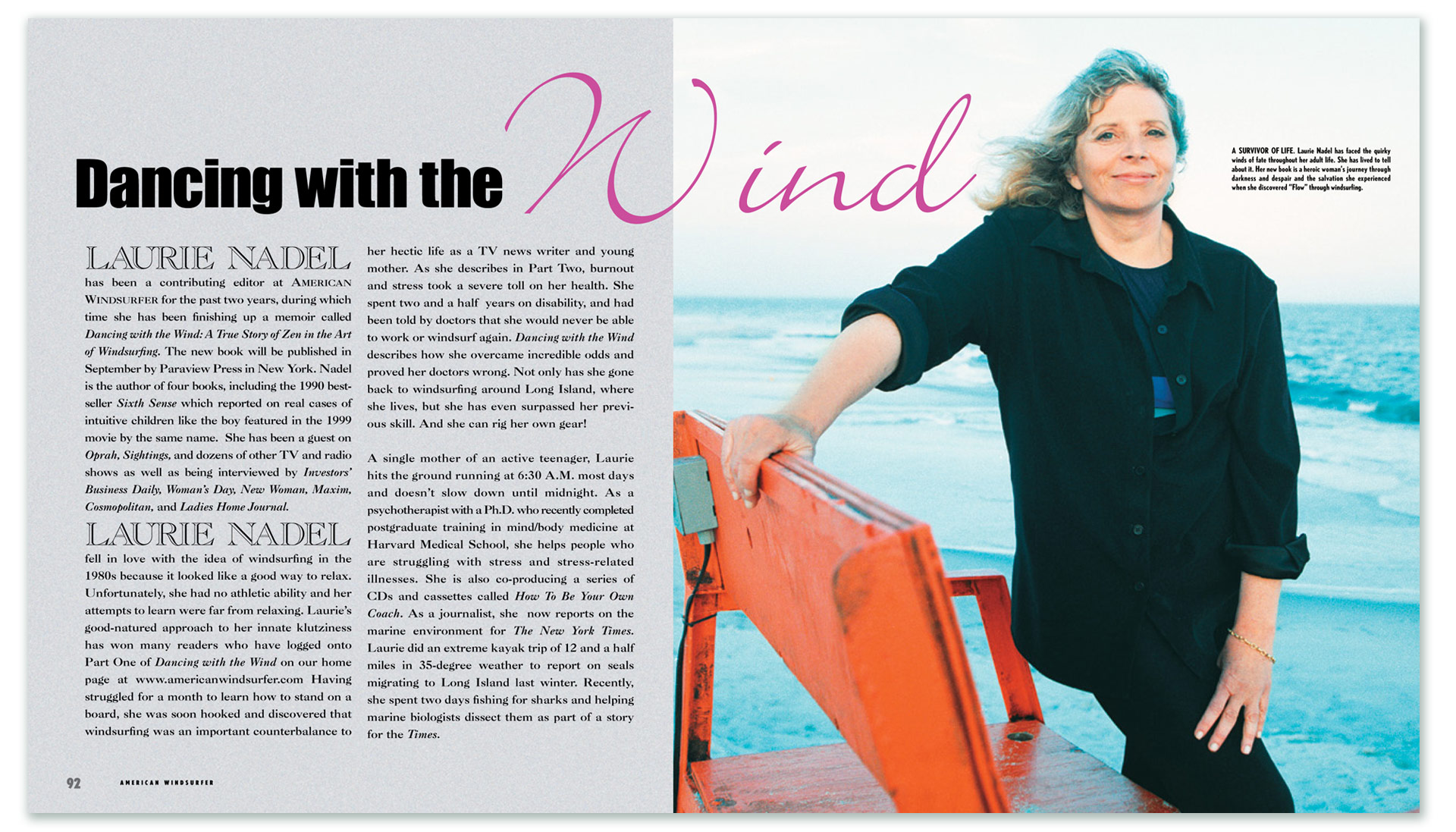 She fell in love with the idea of windsurfing in the 1980s because it looked like a good way to relax.

A SURVIVOR OF LIFE. Laurie Nadel has faced the quirky winds of fate throughout her adult life. She has lived to tell about it. Her new book is a heroic woman’s journey through darkness and despair and the salvation she experienced when she discovered “Flow” through windsurfing.

Laurie Nadel has been a contributing editor at American Windsurfer for the past two years, during which time she has been finishing up a memoir called Dancing with the Wind: A True Story of Zen in the Art of Windsurfing. The new book will be published in September by Paraview Press in New York. Nadel is the author of four books, including the 1990 bestseller Sixth Sense which reported on real cases of intuitive children like the boy featured in the 1999 movie by the same name. She has been a guest on Oprah, Sightings, and dozens of other TV and radio shows as well as being interviewed by Investors’ Business Daily, Woman’s Day, New Woman, Maxim, Cosmopolitan, and Ladies Home Journal.

Laurie Nadel fell in love with the idea of windsurfing in the 1980s because it looked like a good way to relax. Unfortunately, she had no athletic ability and her attempts to learn were far from relaxing. Laurie’s good-natured approach to her innate klutziness has won many readers who have logged onto Part One of Dancing with the Wind on our home page at www.americanwindsurfer.com Having struggled for a month to learn how to stand on a board, she was soon hooked and discovered that windsurfing was an important counterbalance to her hectic life as a TV news writer and young mother. As she describes in Part Two, burnout and stress took a severe toll on her health. She spent two and a half years on disability and had been told by doctors that she would never be able to work or windsurf again. Dancing with the Wind describes how she overcame incredible odds and proved her doctors wrong. Not only has she gone back to windsurfing around Long Island, where she lives, but she has even surpassed her previous skill. And she can rig her own gear!

A single mother of an active teenager, Laurie hits the ground running at 6:30 A.M. most days and doesn’t slow down until midnight. As a psychotherapist with a Ph.D. who recently completed postgraduate training in mind/body medicine at Harvard Medical School, she helps people who are struggling with stress and stress-related illnesses. She is also co-producing a series of CDs and cassettes called How To Be Your Own Coach. As a journalist, she now reports on the marine environment for The New York Times. Laurie did an extreme kayak trip of 12 and a half miles in 35-degree weather to report on seals migrating to Long Island last winter. Recently, she spent two days fishing for sharks and helping marine biologists dissect them as part of a story for the Times.

A BIG DAY for Laurie. Catching the train to Manhattan from Long Island, Laurie prepares to hand in the manuscript for her new book “Dancing with the Wind.” After a year of rejection letters, she is finally on the launching pad for her message of love, life and the zen of windsurfing.

AMERICAN WINDSURFER: Congratulations!  You have a new book coming out called Dancing with the Wind: A True Story of Zen in the Art of Windsurfing. What do you mean, a true story?

LAURIE NADEL:  The book is based on journals I started keeping in the 1980s when I was learning how to windsurf. It started out as a series of personal notes on windsurfing as a way of getting into Flow, a state of effortless concentration.  Of course, the way I was flopping into the water, I was the opposite of Flow for quite awhile.

AW: Presumably you got past that…?

LN: My attempts to learn provided lots of people with vicarious entertainment.  And yes, once I was able to uphaul and navigate, that was it. I was out on the water every chance I could get.

AW: How did you bring Zen into the picture?

LN: Someone turned me onto a short book called Zen in the Art of Archery. It was written in 1953 by a German. He went to Japan to study with a master archer who could hit the bulls-eye blindfolded because the arrow released itself. Wow!  I wanted to know what that was like, to become fluid and still at the same time. Windsurfing looked like it would be a perfect way to learn about that.

LN: Windsurfing has taken me beyond what I ever thought I was capable of accomplishing—physically, mentally, and spiritually. It has been a form of meditation and a source of renewal. It has been at different times a dream, a symbol of the impossible, and a bridge to healing.

Nervous excitement with her literary agent Lisa Hagan, Laurie struggles between self doubt and forging forward. Any creative process such as the making of a book is fraught with obstacles and rejections. Learning to be in the flow has help Laurie put aside the negatives and focus on what’s at hand. In this case, Bogart the cat.

AW: Very much the Art of Zen.

LN: I started studying Zen as a way of  finding balance within myself.  It became more serious when I came down with chronic fatigue syndrome in 1987 because there was no medical cure for that illness. So I  taught myself how to meditate in order to keep from getting depressed.

LN: Absolutely. There’s a lot of research on this now.  Reading Zen and trying to live that philosophy when I was recovering made a huge difference. For example, the three elements that are essential for success in Zen practice are “great faith, great doubt, and great determination.” They were essential to me when I decided to attempt windsurfing again after eight years. Doctors had told me I would never get up there again and my confidence was pretty low except I had those three qualities: great faith, great doubt, and great determination.

AW: Sound like they could be useful in a lot of areas.

AW: So. Let me guess, Dancing with the Wind is about how windsurfing helps work, life, and love!

AW: This is your first book in eleven years. Why did you take such a long time?

LN: I wasn’t going to write another book. Publishing is a difficult business at best unless you’re Danielle Steele or someone who is already famous.  I had a new career where I could make my own schedule, get paid promptly, and people said ‘thank you.’  But I was encouraged to start writing again by someone I respect tremendously, Dan Rather.

AW: Right. Did You work with him at CBS News?

LN: Not directly. I was a founder of a human rights organization for journalists and because I worked there, I  asked Dan and Walter Cronkite to join the Board of Directors.

AW: What made you start a human rights organization for journalists?

LN: I was a reporter for United Press International and Newsweek in Chile during the state of siege. I lived with the family of a political prisoner and it made me aware that we can never take our freedom for granted.

AW: Is that part of the message of Dancing with the Wind?

LN: The message of Dancing with the Wind is, I hope, that each person has within himself or herself what Camus called “an invincible summer” where every moment shines.  When we find it, we are home. Windsurfing is how I get there. Zen, I think, is the art of experiencing that “invincible summer”  and appreciating life without expectation wherever you are. Sitting. Gardening. Driving. Working.

AW: So Zen and windsurfing have similar goals?

LN: They say Zen has no goal. It’s just about being.

AW: What do you want readers to take away from the book?

AW: How else has windsurfing helped you?

AW: So while we’re on the subject of embarrassment: Is windsurfing better than sex?

LN: [Laughing] I had a boyfriend who used to get insulted when I’d leave early on Sunday mornings in the summer. He didn’t get it.  Maybe windsurfing is better than sex but it’s not as great as making love except when windsurfing is a form of making love. It’s sensual, romantic, ethereal, passionate, and involved. It connects you to something greater than yourself. It uses all your muscles and takes all your attention. [Laughing] Maybe I’d better pass it back to you…

AW: You’ve changed your hair color again. Why?  How’s that for a non-sequitur change of subject?

LN: I wanted to surprise myself when I looked in the mirror. Change is good.

AW: You said windsurfing taught you not to be embarrassed. What was your most embarrassing moment, then?

A SURVIVOR OF LIFE. Laurie Nadel has faced the quirky winds of fate throughout her adult life. She has lived to tell about it. Her new book is a heroic woman’s journey through darkness and despair and the salvation she experienced when she discovered “Flow” through windsurfing.